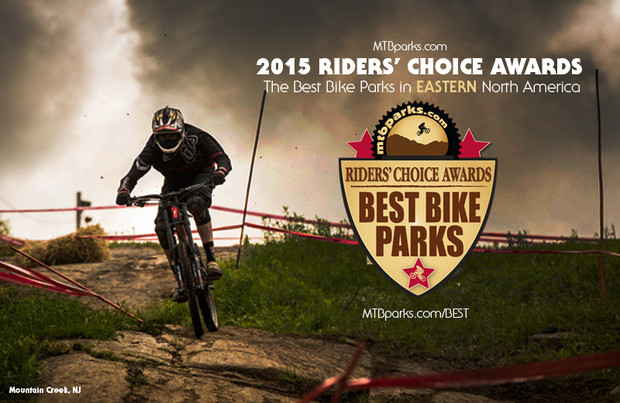 Now in its third year, the MTBparks.com Riders’ Choice Awards survey carries with it undeniable momentum, and for us, has become an official start to the summer riding season. This year, with increased participation and some surprising rankings, we found ourselves watching the top spots change constantly in the 11th hour as the final flood of votes poured in–it’s become our Super Bowl.

It was obvious where enthusiastic participation on the part of underdogs—or even brand-new bike parks—made an enormous difference, the smallest voices becoming the loudest, while apathy on the part of others let them slip in the rankings.

There will likely be some surprise—and even contention—in regard to this year’s results, and like the most staunch of voter advocates, we have to say, “If you didn’t vote, don’t complain!”

Thanks to the survey, you can plan your summer riding trips knowing that this list represents the top bike parks in regions across North America—according to riders like you—who know these parks better than anyone else.

So, without further ado, MTBparks.com proudly presents the Best Bike Parks in North America, as chosen by you, the riders. It is our hope that you’ll use this information to plan your next adventure, whether it’s a summer spent crossing the continent, or a weekend in the local mountains, and experience a new bike park or watch your favorite get even better.

While the East Coast bike parks may not be known for the massive vert of some of their Western counterparts, that certainly doesn't stop them from going big. A passionate and constantly growing base of riders as well as some top-notch trail crews along with more resorts than ever that "get it" have fueled exponential growth in lift-served gravity riding in the last several years. With some resorts that have been there since the beginning as well as some new blood, we're pretty excited about this year's results as chosen by you, the riders. Taking the title for the first time last year, this Eastern Canadian King defends its crown. Built by Gravity Logic, the flow at Sugarloaf Bike Park seems to magnify the 507 feet of vert, offering an undulating roller coaster experience that makes the most of the terrain. But don’t be fooled; tight, rocky singletrack and root staircases await those seeking a technical challenge.

WHY RIDERS VOTED IT THE BEST
Sugarloaf is a small mountain by some standards, but that doesn’t stop it from going big. “We're constantly working on our trails trying to provide the best downhill experience possible. Our goal is to provide that ‘Wow, gotta do that again!’ moment for our first time riders as well as for those who've been here several times,” said Park Manager Greg Dion.

Gravity Logic passed the reigns to Sugarloaf’s trail crew lead by John Cooling, but still stays involved, and returned this past season to put the finishing touches on some projects, including Ridgeline, a new flow trail. The park also creates a unique social vibe with plenty of events, a campground for riders and a new food and beverage area with a deck overlooking the park.

Guilty Parties: “We have a pretty dedicated trail crew, lead by John Cooling. They are constantly inspired by the feedback we get from the riders. They spend about three days per week maintaining and buffing the trails getting them ready for Thursday mornings when the park opens for the next four days. They learned how to build and maintain trails from the guys at Gravity Logic. Dave, along with his crew at Gravity Logic, love coming to Sugarloaf because of the great Atlantic Canadian hospitality but also because they have been involved with the creation and building of Sugarloaf Bike Park from Day 1. They love seeing it evolve and I'm sure take pride having a large part to play in that evolution and they get excited to hear about it's success.”

Advice for First Timers: “First thing would be to reserve a spot in the campground so you can hop on the bike and roll down the hill to the lift first thing in the morning. Take a warm up on Sugar Mamma or Swamp Donkey then hit the jump trails, Sugar Daddy and Suppa Sweet. Ride hard all morning then have a big plate of Nachos on the deck!” More than 40 miles of trail are carved into 1,000 vertical feet of New Jersey soil just an hour from the Big Apple. A fixture in the town of Vernon, Mountain Creek offers a classic East Coast riding experience with plenty of tech, flow and features to advanced riders on their A game, but beginners will find progression, too.

WHY RIDERS VOTED IT THE BEST
Lead by “Head Park-itect” and pro rider George Ryan, the in-house trail crew at the 'Creek offers a world-class bike park experience in a state better known for its taffy and reality TV caricatures from ‘the Shore.’ “We are a park built by riders for riders,” said park representative Kara Chase. And it shows.

An emphasis on progression will continue with new beginner trails and skill zones in 2016, but advanced terrain like the flagship jump lines will be expanded as well. The Thursday Night Race League cash-in-the-hat fun races followed by karaoke and food and drink specials in the Biergarten is a summer staple among locals.

Guilty Parties: “Here at Mountain Creek, we have a very well-versed trail crew. Pro rider George Ryan directs the work on the mountain and holds the official position of ‘Head Park-itect.’ All trails and features have been built and maintained by our staff. We are fortunate enough to have access to numerous pieces of heavy equipment which help us build at the level we do."

Advice for First Timers: “Try to link up with a local. There are tons of trail options, from man-made flow trails to gnarly east-coast rock trails. Warm up on Greenhorn and Breakout, then venture out to the more difficult terrain.”

Southern New England’s newest lift-served offering emerged last year, and in just one season, Thunder Mountain built a dedicated and passionate rider base that shot it to number one in the Northeast rankings. With Gravity Logic at the helm, Berkshire East’s new bike park offers up singletrack smiles for miles with a mix of machine built flow, as well as its share of roots and rocks and dare we even say, East Coast loam. The resort is currently the only in the world to produce 100% of its electricity from onsite renewable energy and plans to double its uphill capacity in 2016 with additional bike carriers and possibly running a second lift.

WHY RIDERS VOTED IT THE BEST
How did a brand-new park sweep the rankings in its region? “Planning,” said Bill Farell, Berkshire East’s Communications Director. “This wasn’t just a thrown-together job. This was well-financed and researched from the start.” Instead of starting small to test the waters, Thunder Mountain jumped in head first, and with the help of Gravity Logic—and even some guidance from neighboring Highland Mountain Bike Park—made sure every detail from the trails to bike carriers, equipment rentals and even the bike videos in the lodge were on point.

“It’s been a successful and impactful first season,” Farell said. “It’s more than a fun park; it’s a big part of our regional economy. Local shops that have never stocked downhill bikes in 40 years of business are all of a sudden selling two or three to a family. We have pizza parlors installing new ovens. Grocery stores are selling out of ice and beer.” Even 77-year-old Roy Schaefer, patriarch of the family-owned resort, was impressed with the bike park’s success. “You know, maybe someday I won’t even have to make any snow anymore.”

Guilty Parties: “The planning that went into it was huge. This wasn’t just a thrown-together job. This was well financed and researched from the start. We brought in Gravity Logic to create a master plan and design the trails as well as train our trail crew. They come back to check on things. Chris Conrad of Gravity Logic rides chainless to ensure flow, reworks trail sections, and rides again. Last year we saw him building and designing well into september. People were truly amazed at the pieced in place when we opened our first year.”

Advice for First Timers: “Get here early! Last year our parking lot was full and the rental fleet was sold out every weekend.” Wisconsin freeride? You bet. Another park that made its debut in 2015 (there was a limited opening in 2014), Little Switzerland sits at the other end of the spectrum from Thunder Mountain, built largely as a labor of love by a dedicated group of volunteers. With 10 trails totaling 3 miles that cater mostly to advanced riders with no shortage of jumps, gaps and other manmade features, Little Swiz makes the most of its Midwest terrain, with big thrills taking precedent over progression. You won’t find rentals or concessions here, yet riders road trip hundreds of miles the select Saturdays and Sundays it is open.

WHY RIDERS VOTED IT THE BEST
It all started about four years ago when Little Switzerland was bought by the Schmitz brothers with the intent to reopen the ski hill after it has been closed for a few seasons. Trailbuilder Gavid MacLeod approached them with a vision of downhill freeride trails—something not exactly abundant in the Midwest. “With multiple volunteer builders and riders with the passion to ride terrain that was not available in these parts it has grown to what it is now,” said MacLeod. Word spread like wildfire, and it quickly became the number one destination for Midwest mountain bikers looking for a gravity fix.

Guilty Parties: “As of now our trail crew consists of volunteers with a passion. They maintain the trails throughout the season as well as building. This park is 100-percent rider built and maintained.”

Advice for FIrst Timers: “Don't be discouraged. Even if you are a first timer there is a trail for you. If you need guidance there is always someone that would be more than happy to show you the ropes.”

CHECK PART 2, THE BEST OF THE WEST.

Want to see how your favorite parks have ranked in previous years? The 2016 MTBparks Pass retails for $149.99 and is currently available at store.MTBparks.com.

Get your 2016 MTBparks Pass today!