The Fijian Waves You Should Know About 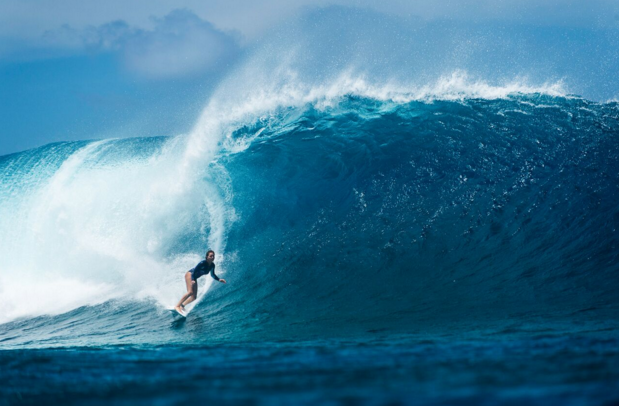 A caldera off the coast of Fiji can provide for the perfect wave. Ricky Lesser photo.

Nearly every surfer has heard of the waves off of the island of Tavarua in Fiji. Between the immense media coverage and various surf contests, the island has garnered epic international surf status. But many don't know about the equally captivating Frigates and the Fiji Pipes. These lesser known Fijian waves are located off the beaten path, but our efforts to find them were well worth the reward.

When Dane Zaun, Bruna Schmitz, Tyler Haft and myself landed at the Nadi international airport we were hell bent on exploring a different side of the Fijian coast. We aimed for a point on the map that is not riddled with surfers, overpriced drinks, and heavy tourism.

Fiji has a distinctively raw quality. I suppose it is like any third world island. The cities are hectic and the streets are lined with patrons selling local ag, bananas, coconuts, papayas and other streetside goods. But there is an instant feeling in the air when you get into the countryside and it is one of benevolence. The way the people treat each other reflects that to a tee.

By far, Fiji has some of the most welcoming souls I've encountered.

A four-hour ride southeast from the airport led us to our initial destination, the Navutulevu village. We were welcomed by a very kind man with the classic Fijian smile and generous hospitality. In Fiji, it is customary that travelers staying within the vicinity of the small local villages meet face to face with the village chief and state one’s intentions. And, of course, share some Kava. In our case, it was a lot of Kava...

Kava is a drink made from the sacred Kava plant root and is linked to Fiji’s ancestral past. The Kava itself is thought to have medicinal qualities helping the body and mind slip into a relaxed euphoric state.

We sat in a circle for many hours talking with the Chief and his son. We told them of our intentions to experience the lesser known areas of the region. He was enthralled and eager to help in whatever way he could. We shared stories and copious amounts of Kava till the day was no more. 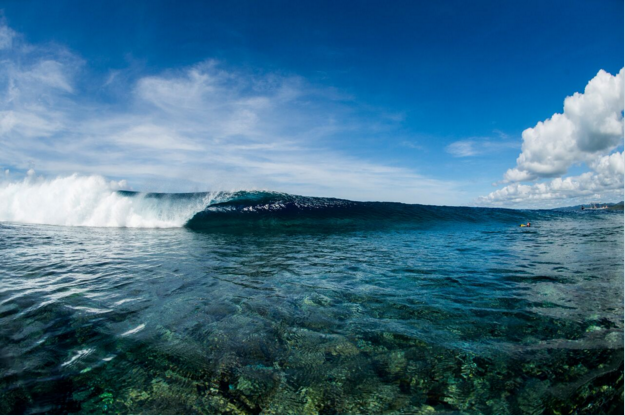 The Fiji coast can provide the perfect wave that surfers dream of. Ricky Lesser photo

Awaking from the sedative haze of our kava celebration we slowly began to focus—we channeled the fire that drove us here in the first place... the ocean.

The waters of Fiji are warm and inviting, but at times unpredictable.

The southern coasts of Fiji are protected by outer reefs, which luckily for surfers, tend to have keyholes and channels every few miles up and down the coast. Not everyone is a gem but a handful of these reef passes absolutely shine with the right wind and direction of swell. 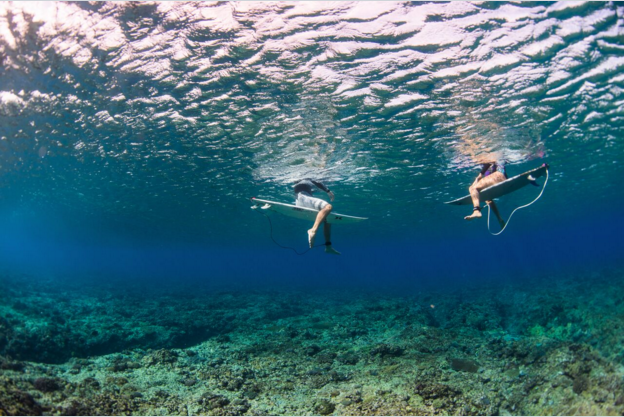 The Frigates and the Fiji Pipes specifically stood out with brilliance. The paramount location was a caldera 40 minutes off the coast by boat. It was a fairly grueling open water crossing with every board, pelican and fishing rod strapped down.

Once we motored into the lee of the caldera you could see marching lines up and down the reef. The angle of the underwater volcano pulls almost 170 degrees of swell. On one side, a straight closeout every time, on the other, a well-shaped wall talking perfectly with the reef, hundreds of yards down the line. 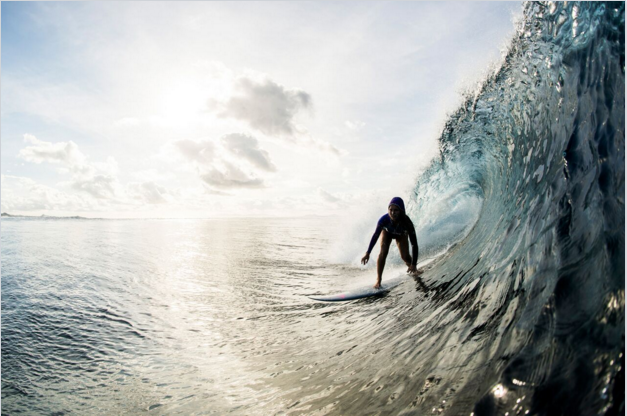 Cameras in hand we swam into the break. The water clarity and the energy of the ocean seemed unreal. While we were filming Dane and Bruna, the waves would pass over our heads and we could watch ourselves, and every fish 8-15 feet below, push into the reef by about 20-30 feet. And then we would be pulled back out with the same urgency as the next wave in the set approached. Dane and Bruna were on cloud nine. Large faces with big drops led to long big beautiful drawn out lines captured by our water housings.

Exhausted after five hours in the surf and watching Dane and Bruna go absolutely ham, Tyler and myself swam back to the boat. It is a mellow swim and we had full smiles ear to ear. Looking down, the sea floor drops away to 350 feet. We could see the random silhouettes of the reef sharks far below. After a whole morning of pumping reef passes we made our wet journey in towards the near shore reefs. The small break was blown out so we called it for lunch.

We spent the majority of the afternoon eating the fish we caught the day before and drinking coconuts the locals grabbed for us. And it was just about time for a few "Fiji bitters" when Dane—who had been watching the waves with binoculars—started to freak.

"The Wind switched,” he yelled as he ran off to wake up the boat driver who was napping on a hammock out back. We were back on the boat as fast as we could get our cameras packed and boards loaded. 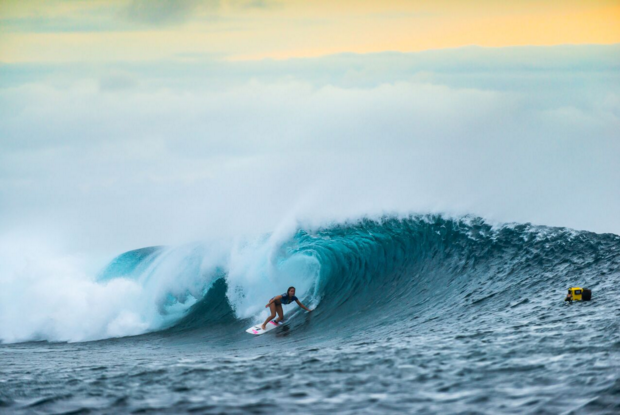 Surfing into the sunset in Fiji. Ricky Lesser photo.

We pulled up to the small break and there was this feeling of an eerie tension. The winds were dead off shore, but it was flat. Nothing. No one said a word for a true 10 minutes. Our boat driver simply gestured back with a casual nod of calming confidence, as to say “hold tight, just you wait.”

Without fail, a perfect eight footer came in and peeled across the reef, then spat its guts out just enough for us to get a bit of spray on our faces. I think Bruna and Dane lasted 90 seconds before they were in the lineup. Trading barrels for the next few hours, they burned daylight in this slice of Fijian paradise.