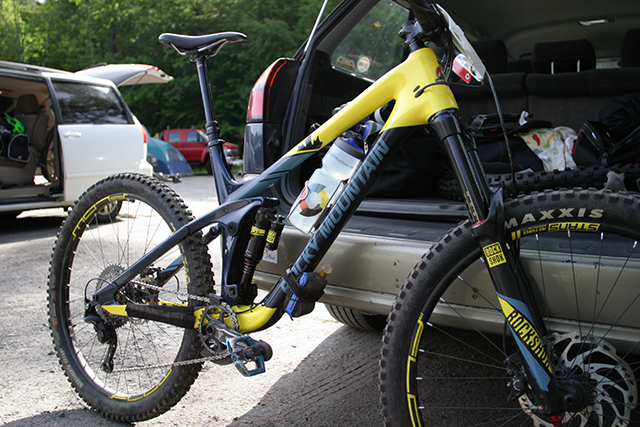 FIRST IMPRESSIONS: The Slayer has the best mountain bike paint job I’ve ever seen. Its angles work perfectly with the hidden pivots and sleek, low, look of the frame. Its 'Slayer' hockey mask graphic is badass (Rocky Mountain is a Canadian company, so maybe that's just about hockey?). The bike looks dark but not evil, colorful but not gaudy and fast while standing still. 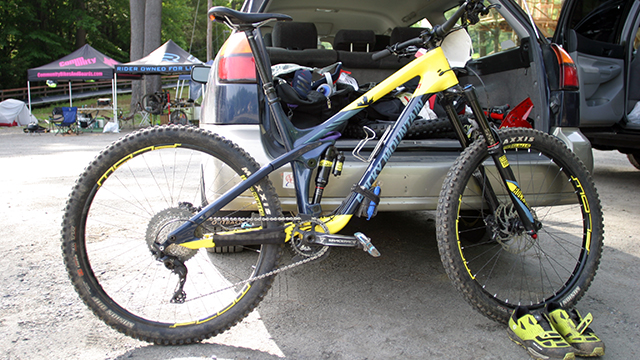 My tester 770 came spec’d with the new metric Rockshox Super Deluxe shock and Lyric fork. The Lyric was a joy and, paired with the Super Deluxe shock, delivered crazy plushness and easy set-up. Truthfully, you’d be hard pressed to find a more thoughtful build overall on any bike.

I did add one extra token in the 170mm fork (it came with just one pre-installed) just to get the end stroke to ramp more progressively. The rest of suspension setup was a pleasure, I found the right PSI and rebound settings really quick. And because the Super Deluxe is metric, it's got a bit of future-proofing. 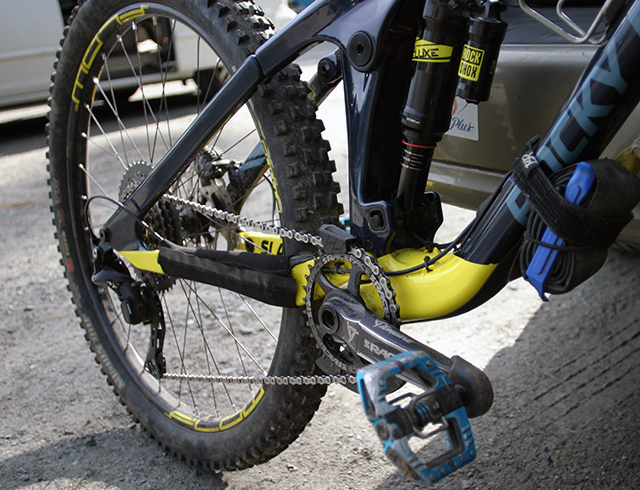 The Stan’s Flow MK3 29mm internal-width rims paired with Maxxis 2.5WT Minion DHF tires are spot-on choices for this bike. Love it. Just the right width and, if you’ve read TGR’s review of those tires, you'll know they are some of our favorites. ESPECIALLY for gravity and heavy mashing. 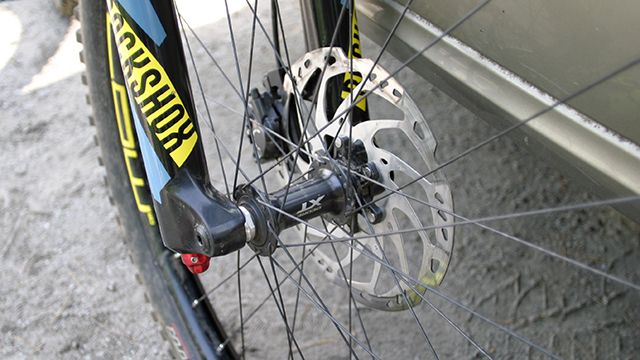 203mm rotors in front/180 in back—can’t really go wrong with that—all the stopping power you need. Though I will say rotors that big stick out enough to catch a rock or two. Or maybe go out of true every now and again. I took a rotor fork to the front one once or twice to take out a rub.

Burly Race Face Turbine cranks and an e*thirteen bash-guard round everything out and give you an indestructible feeling. 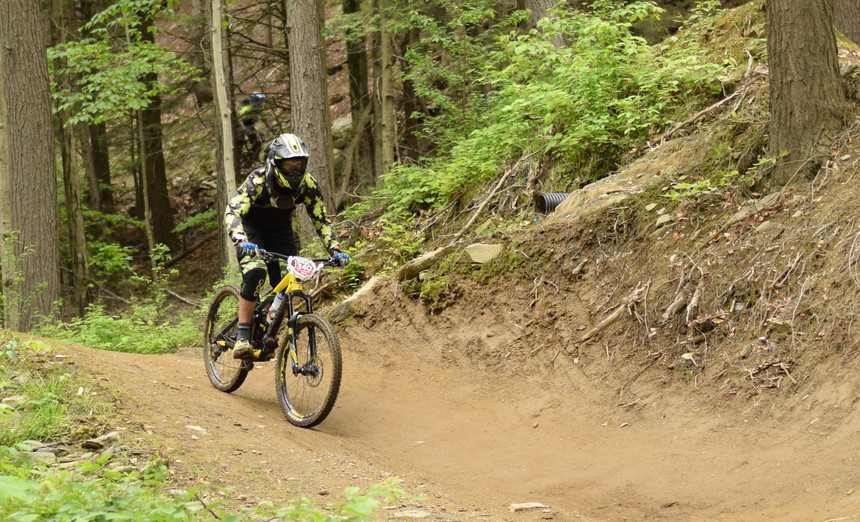 First ride impression was ‘holy cow this thing changes direction quickly.’ With all the hoo-ha about 29ers and short-travel trail bikes over the last year, I forgot how much fun a long-travel 27.5 bike can be. The Slayer is SO agile. I guess that's similar to being 'fun' or 'playful', but its side-to-side agility give you those precious few extra milliseconds to plan one more step ahead, or savor that brief pop coming out of one curve and into the next.

I’ve mocked more than one of my friends for buying ‘too much bike’ for trail riding. While the Slayer is ABSOLUTELY a bike you should show up to any Enduro with and haul ass, it’s also a remarkably fun all-around bike. I didn’t put it on a scale but, as you pick it up over your head to put it on a roof rack, it’s way lighter than you’d think. My guess is under 30lbs by at least a pound or two. 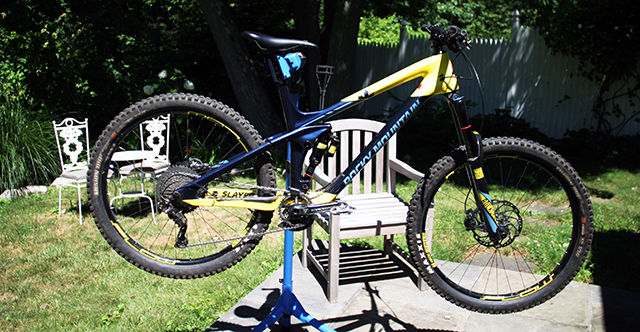 Super-sweet ride for just about anything you want to do with it. GW photo.

Not to mention the Slayer rides really light. Again, long wheel base and 65-degree head angle shreds the downs, but it doesn’t turn into an iron pig riding on undulating terrain with your buddies. It is a very respectable climber/roller over technical east coast rock gardens. Just make sure you have enough rebound, as the deep, plush travel is more designed for whacking into stuff hard. Does it like slow, picky, rides? No. Get a hardtail fatbike for that. 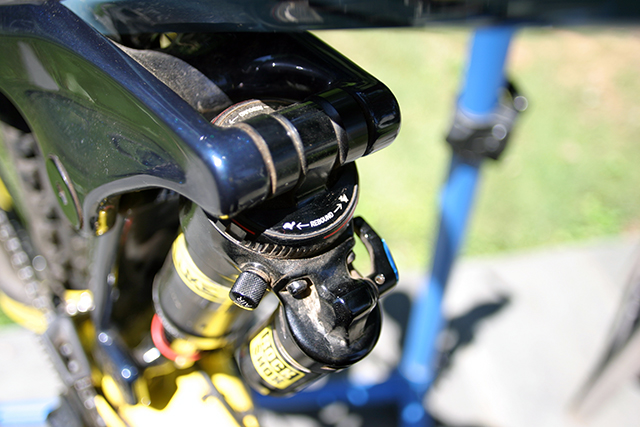 One of the things I like about the Super Deluxe shock is the big, easy dial for rebound with the rabbit and turtle graphic. No small, fiddly dial, just a big wheel, right on top. It's easy to figure out if you’re making suspension faster or slower. Fox’s stuff always bothered me a bit because the plus and minus seem counter-intuitive. I’m never quite sure which direction is what. Minus to me means slower, but it could also mean less rebound damping, which means faster. Whatever. On this shock you know what you’re doing. It's easy to reach and dial in quickly.

The change in geo with the flip-chip. Rocky Mountain pic.

You can flip the Slayer’s geometry chip to change the head angle/seat angle/reach from super-enduro-bro setting to slightly less racy. But even with the geometry chip in the lowest setting it climbs very respectably. In the highest setting, it climbs well enough to consider buying this bike as your daily trail driver, while still maintaining its capable descending chops. 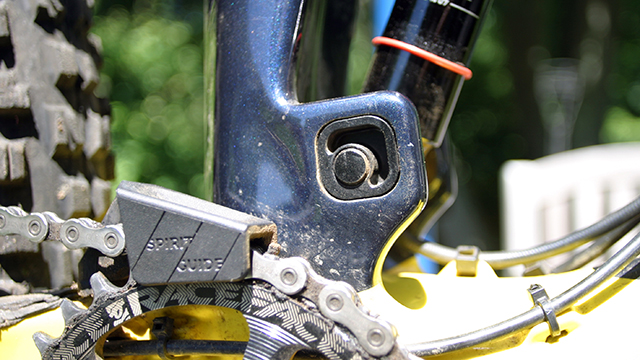 The low mode, where I pretty much left it, was fine. GW Photo.

Descending one of our New England trails built near old stone walls which rumble through our woods, the Slayer navigates weird, precise, fast gaps in those walls with style. Though after one or two descents, you realize the Slayer can just go OVER the friggin’ wall. 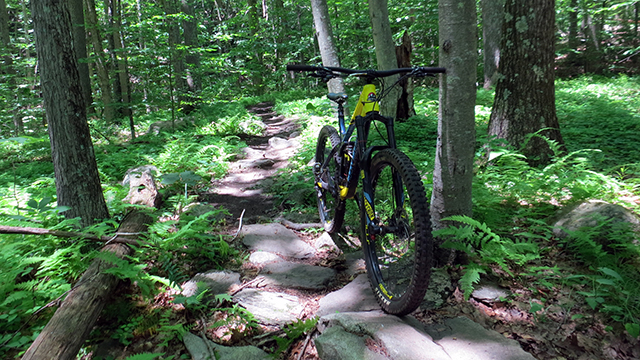 Slayer in the woods. GW photo.

The very plush Lyric fork, four-bar suspension and Super Deluxe shock have a lot to do with that. When approaching anything technical with a fair amount of speed, 170mm of travel, steep head angle and at-the-ready plushness inspire ample confidence to keep charging. 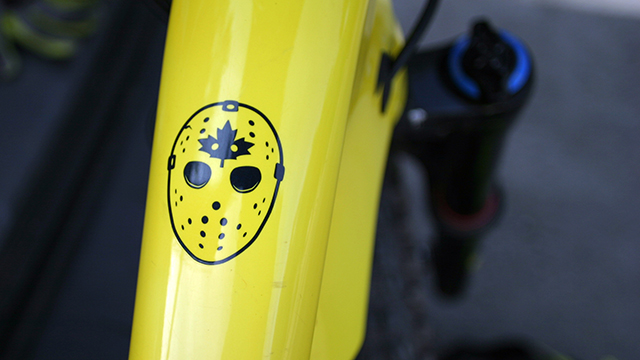 Keep chasing, until you catch them. GW photo.

I raced the Slayer at the Eastern States Cup Enduro at Thunder Mountain. The bike is so fun I pre-rode my legs to death a bit the day before. What was supposed to be a day of checking stuff out and measuring effort turned into a really fun day at the park.

During the race, a little spill on a deep, muddy spot during the last stage cost me some time but overall the Slayer enabled a fast day for me. It is awesome. Agile, confidence inspiring, grippy like an ex-girlfriend. Just point it at hard descents and it provides the confidence to fly through.

The Slayer's cornering gets more and more aggressive as you proceed downhill “Heck, that worked out fine, let’s lean it even more on the next turn” is how my internal monologue tended to go. The Stan’s Flow MK3’s supportive, wide, sidewall and compliant aluminum rim with Maxxis’ 2.5WT tires also help here. They make sure the line you pick is the line you stay on. 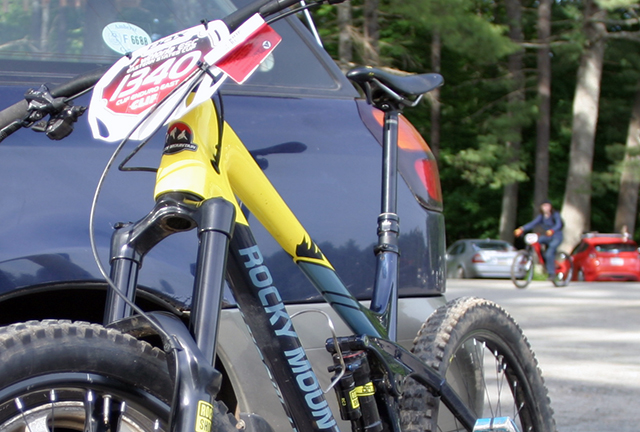 Rockshox’s 170mm dropper gets WAY out of your way. When it’s down, it’s gone...especially nice when you’re dropping your butt and pulling back into a manual or bunny-hop. Sure, it’s got the Rockshox button, but the one on this bike worked flawlessly. 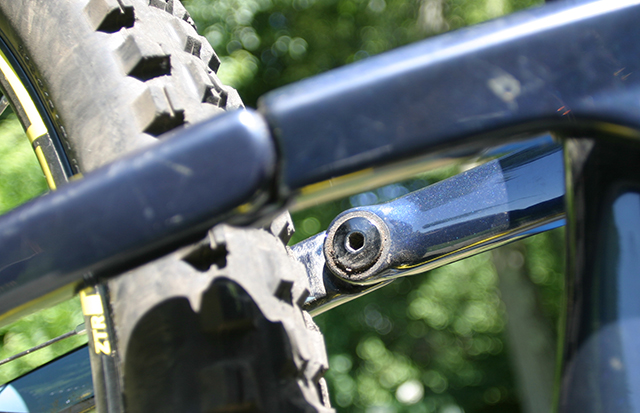 The elegant, hidden links in the seatstays. GW photo.

And when back to a Saturday morning ride with the crew... I’m coming to appreciate quick, easily adjustable suspension more and more. 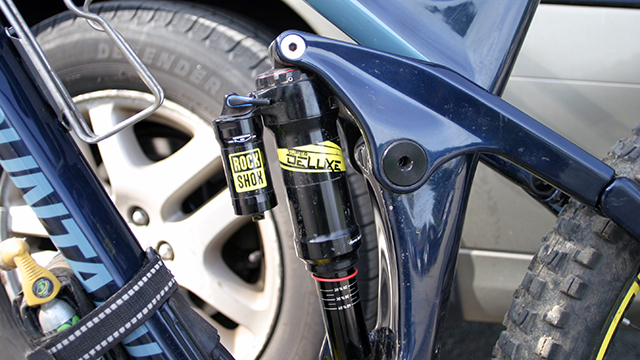 The shock’s 3-position damping switch allows the Slayer to climb well. When the trail points downhill, your friends aren’t catching you. Ever. Wait for them at the bottom with the most douche-y ‘what took you so long’ face you can make.

I pray and hope they don’t get all 29er with this bike. It’s a real winner the way it is. If you’re into gravity, this is a serious leader-of-the-pack. What this bike also does beautifully, is flex into aggressive trail riding. The Slayer marries the bomb-proof feel of a gravity rig and the playful, agile riding characteristics of a lighter bike. 27.5 is alive, well and still kicking ass. 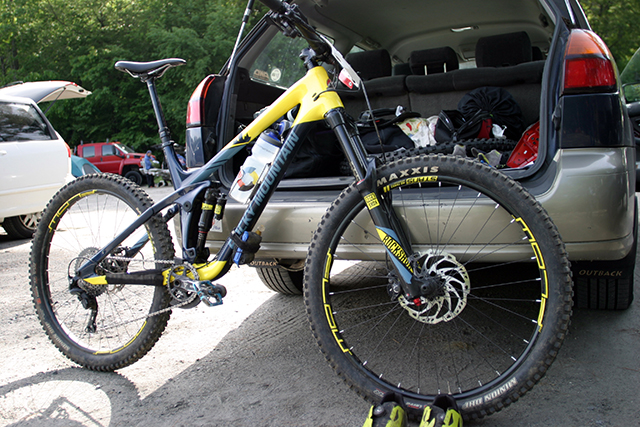 If you were smart about building a bike, you'd build it like this. Aluminum rims, bash-guard, solid cranks, wide bars and a plush suspension. Rocky Mountain also offer a 790 for a bit over a grand more, spec’d with fox suspension. Without judging the 790, which I haven’t ridden, I don’t know why this 770 is the ‘cheaper’ build. It’s absolutely a top spec. I would not change one thing. If you’re a hardcore Fox fanboy, fine, get the 790, I’ve ridden the 36 fork and it’s great.

Full truth: I’m saving my money now and fully intend to buy one of these 770s for next season’s racing. 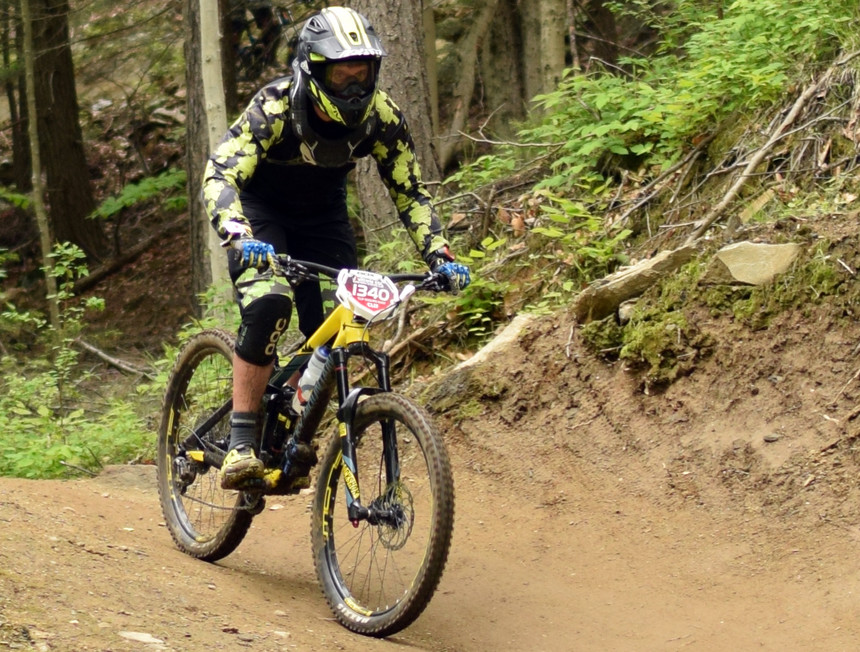