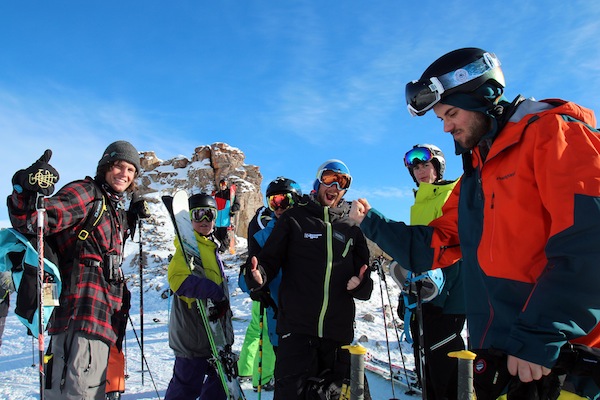 Want to ski and ride the big mountain mecca of Jackson Hole Mountain Resort, hone your backcountry and freestyle skills and ride with TGR's award-winning athletes? Then TGR's Fall Line Camp is for you.

Now in its third year, the Fall Line Camp will take over JHMR on December 29-31, 2013. The camp provides young skiers and snowboarders the opportunity to ride with TGR Way OF Life athletes Tim Durtschi, Griffin Post, Max Hammer, and Daniel Tisi, as well as members of JHMR's elite coaching staff.

We turned to Tim Durtschi, TGR athlete and veteran ski camp coach, for his insights into this year's camp, his favorite moments from last year, and what makes TGR's Fall Line Camp a must-attend event this year.

Take it away Tim!

What is your history with ski coaching?

I started coaching at Windell's summer camp in Oregon when I was 18 and did five summers there. Now, since there is such a demand for camps in Oregon, Mt. Bachelor started doing a summer camp two years ago. It's mostly local kids, but I have coached there the last two seasons and it's really fun to get to hang out in Bend in the summer and beat the Hood crowd. I also coached the TGR Fall Line Camp last year.

What are you most looking forward to with this year's Fall Line Camp at JHMR?

I'm excited to ski Jackson with the campers—they have so much energy and always want to ride first to last chair. I have been to Jackson a couple of times, so I am still learning a lot about what is where and am excited to learn more about mountain.

What was the craziest thing you saw a camper do last year?

Watching kids rip down Casper Bowl was the best. We made the hike out there and it was worth it because we got some really good snow, and everyone had smiles on their face at the bottom. Kids were lining up cliffs all the way down—it was a blast.

Why are camps like TGR Fall Line Camp important for progression?

I think the best quality of the camp is bringing the kids together and giving them a chance to feel comfortable skiing around their peers. I know from experience that skiing in a new place or a place with more experienced riders can be intimidating. The camp eliminates that feeling and it's an environment where the campers can be themselves and learn from each other.

How will you help campers achieve their goals at this year's camp?

Mostly by showing them that it's possible. If a kid wants to learn a trick I will show him the steps and check them off one by one. Sometimes things take a lot of practice and the camp isn't meant to put pressure on the campers to perform at a certain level. If the camper wants to learn a 720 and is still working on a 360 we are going to take it slow and make sure his 360 is dialed before we move on to the more technical trick.

What is your favorite part about skiing at JHMR?

Well the kids choose where to go for the most part, but luckily they are adventurous and like to explore the entire mountain. The best part is starting out with a tram lap to the top, a waffle and then just exploring the resort with the crew.

Last year you raced the tram down, but missed beating it.Are you primed and ready to beat it this year?

I don't know if conditions will be favorable this year, at least I'm hoping there is more powder and less groomed corduroy. If there is more powder then I'm going to be busy skiing that and not have time to straight line down the mountain to beat the tram so I will probably never beat it.

Check out Tim attempting to beat the tram during last year, and get a glimpse into the action from last year's Fall Line Camp.