The White Ribbon of Death. You're desperate enough for turns to need it, and you’re grateful for it. But deep down inside, you hate it, and you’re wishing you could still escape. What if you didn’t have to tolerate manmade snow, temper-raising lift lines, and beginner skiers traversing in a wobbly pizza across your home resort’s only open run?

Early season snowfall hit some regions hard, giving splitboarders unusual opportunities to skin for turns. We did a nationwide search for the best early season powder conditions for American snowboarders, and here's the five best places to get some right now: 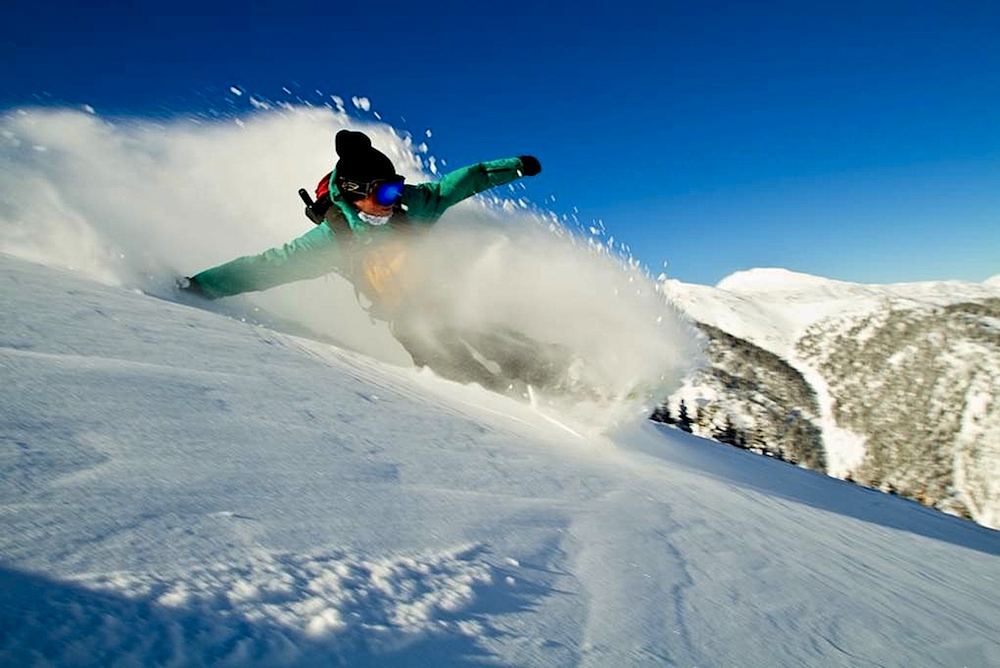 “The peaks are steep, jagged, and full of classic hallway couloirs that hold snow from October until July,” Overton explains.

Despite the 13,000 and 14,000-foot peaks and massive drainages you can ride, Overton warns the San Juans’ snowpack is exceptionally shallow and conducive to the formation of weak layers.

“Avalanche conditions are often very touchy for much of the winter,” he says, “but careful assessment of conditions can lead to mind-blowing descents of 50-degree narrow couloirs in cold, blower powder. There are also tons of below tree line chutes, fingers and small slide paths that can be unreal after a 30-inch storm in November, which seems to be the theme lately.”

Drive the road back and forth, Overton suggests, because you’ll see more lines from the road than you could hope to ride in a lifetime.

“One of the best 'bang for your buck' tours in the early months of winter is from the summit of Red Mountain Pass traveling east to Silverton Mountain via McMillan Peak,” he offers.

“A shuttle is needed, but a one-hour skin on mining roads can get you over 2,000 feet of typically deep, well-preserved, north-facing snow," Overton explains, adding, "You earn one hell of a view and a descent that begins above tree line on a feature-filled ridge, then exits into big, half-pipe drainages–and right to the base of the Silverton chairlift.” 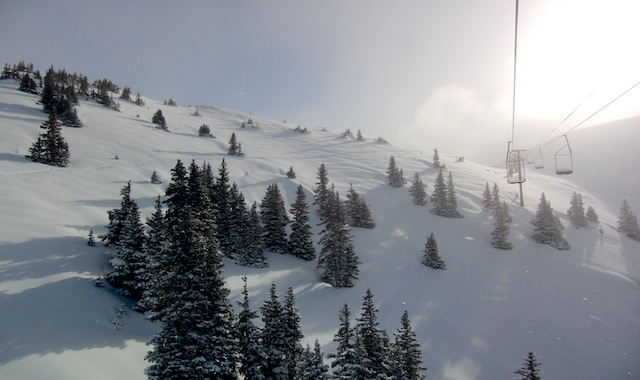 The solitude and quiet of Silverton's only chairlift brings you straight into the alpine and to the foot of tons of hikeable options to couloirs and alpine lines higher up. Silverton Mountain photo.

With the ski area’s base at 10,400 feet, co-owner Aaron Brill says Silverton Mountain’s sweet spot is between 13,500 and 11,000. Most runs are above treeline, especially on the couloir-covered backside, Velocity Basin. Locals access this area by driving past the ski area base and booting up from the end of the winter road. (If you’ve been there, you’ll know it as the place you wait to get picked up by the Silverton Correctional Facilities bus).

“It is still early, so rocks are always possible, but we operate in alpine tundra at these elevations, so it is usually smooth grass underneath,” he says.

Brill adds, “You can pick from dozens of lines with ample snow to ride, and the hazard has been manageable. Even when we get four feet, there’s a tipping point between enough coverage versus enough snow to slide. Tree skiing is still off-limits, though.” 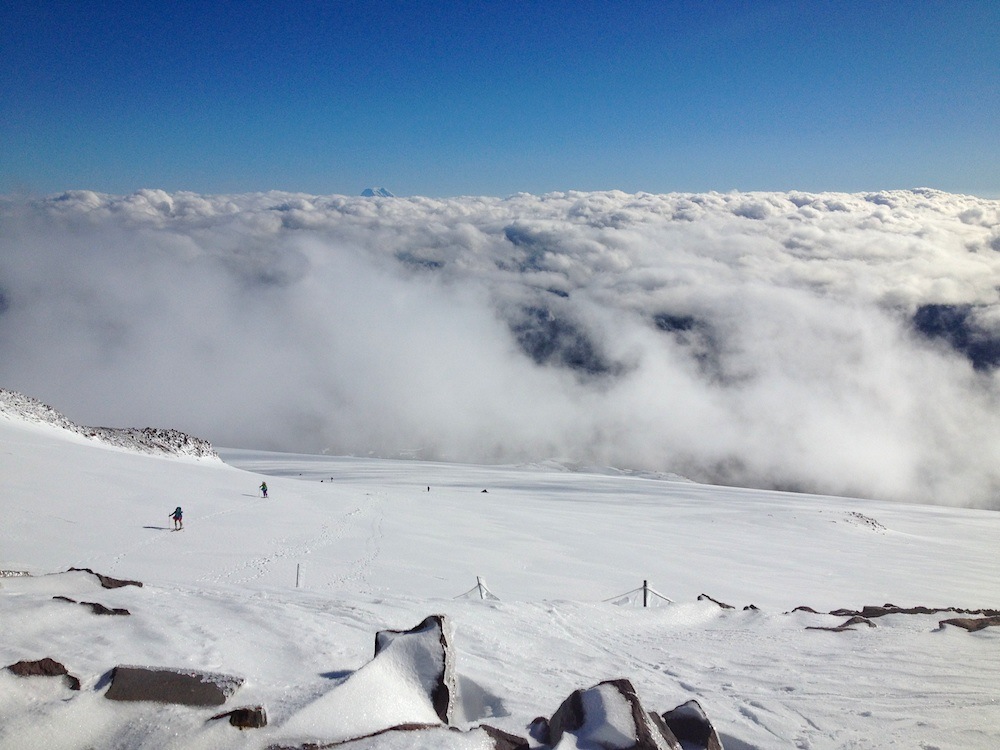 “You have tons of glaciers up here that are really treacherous,” Steele explains. “The Muir Snowfield is a great early season spot because it only has a couple of crevasses, which get filled in quickly. It’s also not quite steep enough to slide for the most part.”

Steele explains Rainier’s all-over-the-map conditions change by the storm. The maritime snowpack, he says, and the region’s big swings in the temperature play with the snowpack quite a bit. These dramatic fluctuations affect the Muir Snowfields 2,000-foot dry approach, and subsequent 3,000-foot skin.

How much you hike versus how much you skin depends on how much recent snow the glacier received, Steele says–or how much rain. 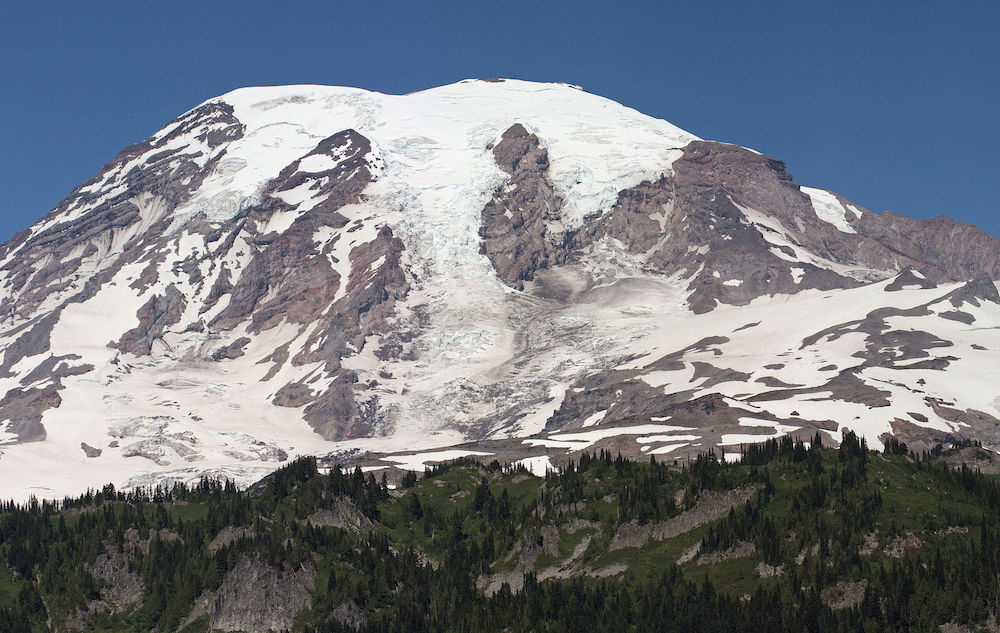 In this photo taken of Rainier from the southwest, the Muir Snowfield can be seen on looker's right descending towards the center of the frame. Walter Siegmund photo via Wikimedia.

Conditions, he adds, can range from powder to rime ice to rain crust to wind-blown hardpack to corn. The skin up the glacier normally doesn’t call for ski crampons, Steele adds, except for the occasional middle-of-the-night ascent the day after rain.

From the parking lot at Paradise Lodge and Henry M. Jackson Visitor Center, splitboarders can hike the Skyline Trail for 2.5 miles to a sprawling meadow vista, Panorama Point, and then skin through the Pebble Creek drainage to the Muir Snowfield at 10,188 feet. The permanent snowfield starts as low as 7,000 feet, depending on recent storms and temperature variations.

During colder stretches, the rolling, gradual descent extends from top of Muir Snowfield to the visitor center parking lot and drops 5,000 vertical feet over three miles. 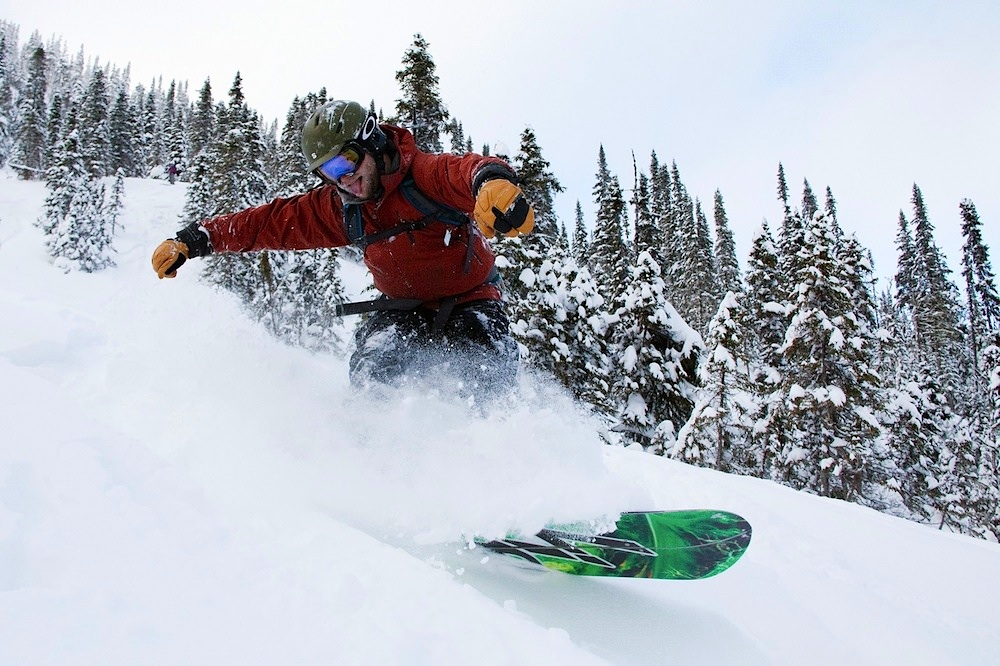 The Chic Chocs: quite possibly the best skiing on the East, and for sure the most remote. Charles Bilodeau photo.

But pow paradise awaits six hours north of the Maine-New Brunswick border, where Quebec’s Gaspe Peninsula curves like a bent finger into the Gulf of St. Lawrence. Humidity from the St. Lawrence River drops lake-effect snow onto the 3,000-foot-high, round-topped Chic Choc Mountains and blasts the range with north winds.

“Most of the mountains on the peninsula are sandstone brushed away by glaciers,” says Logeay. Therefore, he explains, the Chic Choc’s rounded peaks combine exposed, partially alpine with partially gladed terrain.

Logeay recommends the 550-foot run down Champs de Mars for beginner to intermediate splitboarders. Low intermediate to advanced riders can cut their teeth on the 0.4-mile approach up Hog's Back’s southside, and then enjoy a 1100-foot vertical descent through protected glades. Two couloirs on the peak’s northface represent more technically challenging riding options, but also have a higher risk of avalanche danger.

Higher level riders must hit two Chic Choc gems: the 40-degree, 1200-vertical-foot tree runs down Mont Lyall and Mines Madeleines. The latter has the only mechanized access, huts, and guide services in the Chic Chocs–and it might be wise to utilize them. Mines Madelines demands an 8-mile approach to what might be the most difficult riding available in this remote Quebecois range. 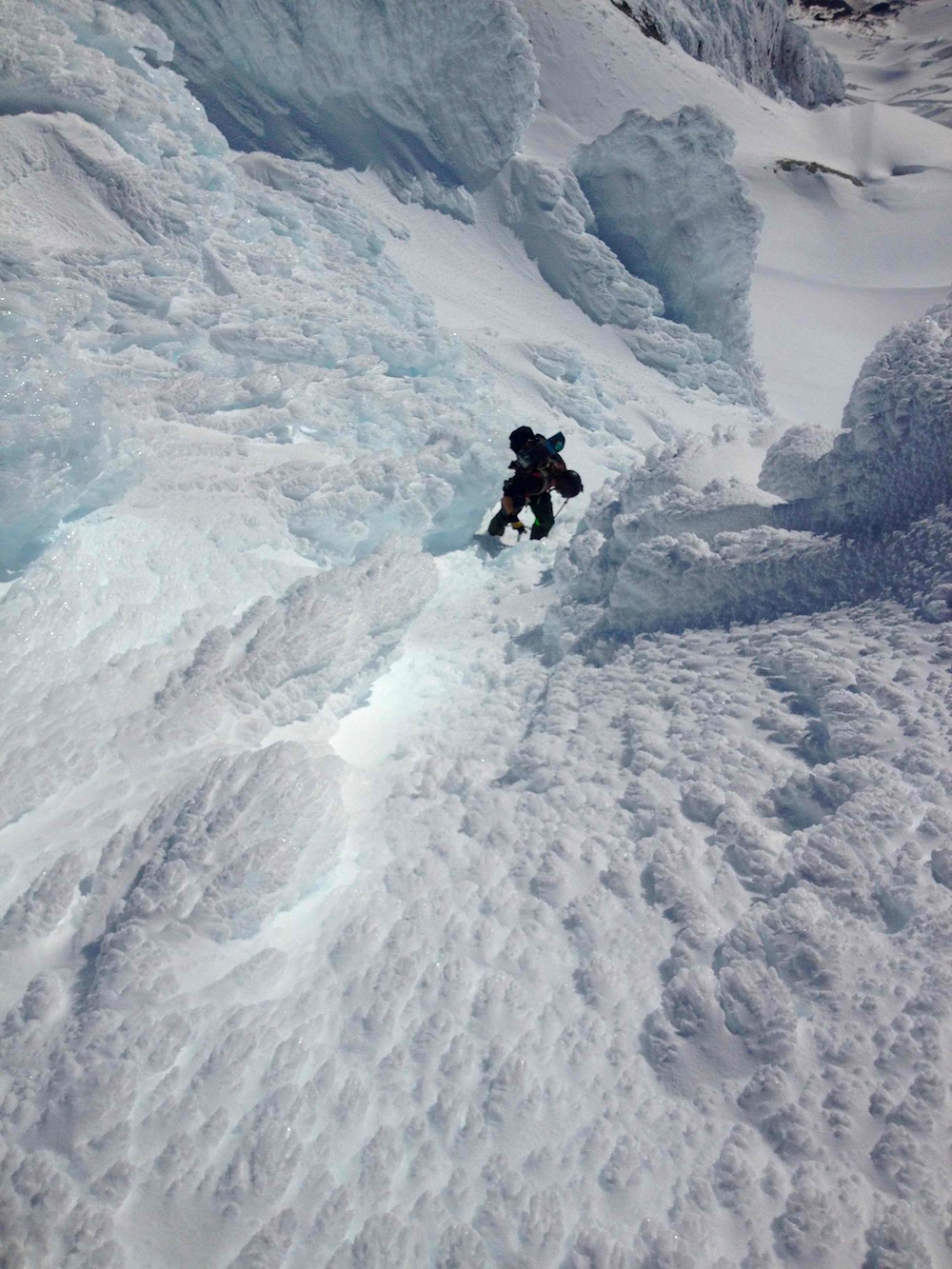 No, you’re not taking park laps at Mount Hood Meadows; you’re hiking with crampons, self-arresting with an ice axe, and riding precisely through no-fall zones.

Riding from Oregon’s highest summit isn’t for the faint of heart. Conditions from top to bottom change dramatically, and with high consequences.

“The first 500 feet or so of the run [from the summit] is an absolute no-fall zone: there are gaping volcanic vents–called fumarole–in the fall line directly below,” says Portland-based splitboarder Cameron Brown.

“I always joke with anyone who is thinking about riding from the summit of Mt Hood that a good riding style is not falling." Brown adds: "If you fall on 45-degree face, you must self-arrest or you end up in a fumarole that leads to hell.”

Starting at Timberline Lodge at about 5,900 feet, the 5-hour climb to the Mt Hood summit includes an hour-long, mandatory bootpack with crampons up a steep, exposed slope along Hood’s Crater Rim at 11,220 feet.

Brown made a early-winter ascent of Hood’s summit in order to ride the south-facing Old Chute. When the mid-day sun still hadn’t soften the snow in Old Chute, Brown and his climbing partner, Morgan Lipscomb, chose an alternate descent route west of Old Chute. They decided on 50-degree, southeast-facing couloir on West Rim that receives early morning sun and contains fewer fumaroles.

However, even with the morning sun warming the couloir, the two rode down what Brown calls “icy chicken heads with a few mounds of rime ice at the exit of the chute.” The two riding partners both needed to self-arrest in the icy couloir, and Lipscomb even lost his ice axe in the process.

Despite the survival riding necessary to navigate the descent from the Hood summit, there’s always goods to be found.

About 1000 feet below the chute, Brown says the pair found better snow and dropped cliffs on Illumination Rock before discovering corn in Zig Zag Glacier’s gullies “with half-pipe like features and small cornice hips that were perfect for airs and slashing.”

“Early season is really unpredictable on the East Coast,” explains Joe Gaetani, a photographer with Rightside Productions in Burlington and a member of the Vermont splitboard crew, Check Your Pins.

“There have been years when resorts in West Virginia got tons of snow; other years it’s been southern New Hampshire,” he says.

“The only seemingly consistent place is northern Vermont. Resorts along the northern spine of the Green Mountains–Bolton Valley, Stowe, Smuggler’s Notch, Jay Peak–always seem to have at least one storm big enough to bury the grass and rocks.”

Gaetani explains that in 10 of his 13 Vermont winters, he’s been riding shallow, natural snow as early as October.

WIth coverage being consistent but still slim, East Coast splitboarders stick to pre-opening day resort sessions or closed areas until about mid-January. Then, Gaetani adds, “we can start tiptoeing through the woods.”