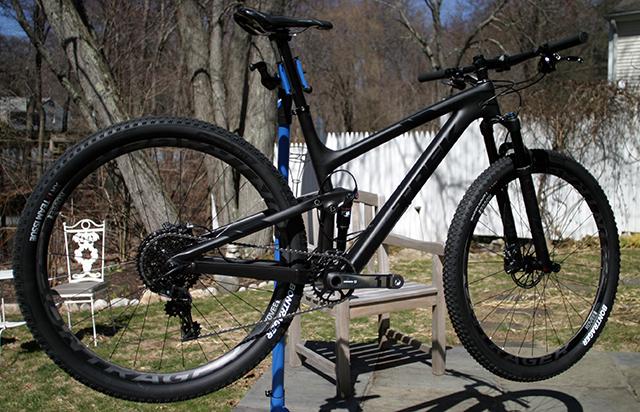 Trek bills the Top Fuel as “fast, versatile...for the cross country racer, marathon rider, and the Trek Factory Racing World Cup team.” All these things are true. It’s wicked fast and way more versatile than you might think. Like most race-focused bikes (or race-focused anything), the Top Fuel takes a little while to get to know. That’s not a knock, it’s a compliment. Once you earn its respect it'll carry you far and fast. 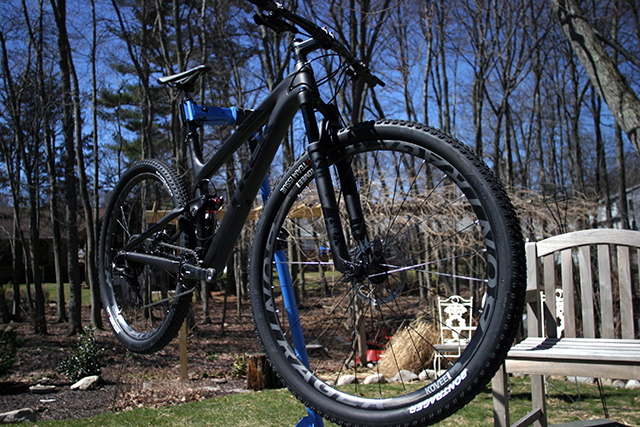 It’s got normal, 11-42-tooth 11-speed gearing and a 32-tooth front chainring. Fast and light, nothing crazy. XC bikes are designed to disappear between your legs. You don’t want too much thinking going on while trying to beat 50 other caffeine-jacked lunatics off the starting line. 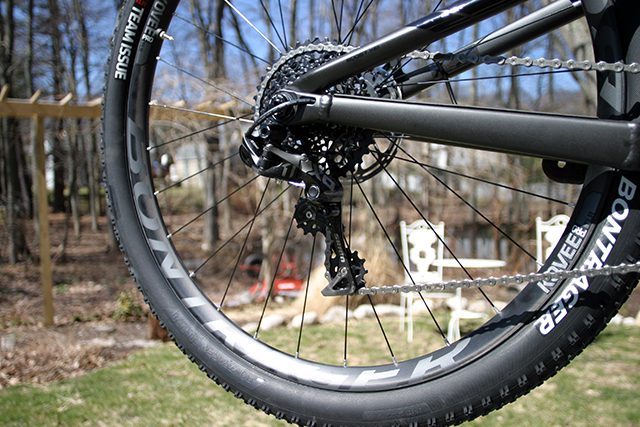 The wheels are boost-ed Bontrager Kovee Pro, OCLV Carbon. They are super light and fabulous for racing. They held up fine on trail rides too, straight and true as the day they came out of the box.

The tires… well… Bontrager XR1 Team Issue are beautiful things but, unless you live in the desert, they’re a bit precious. On smooth, fast courses, they'll probably work great. I threw on Vittoria 2.35 Morsas for muddier rides and 2.25 Mezcals for faster tracks. The Mezcals were better overall than the beefy tire, but still had better tread and a stronger sidewall than the XR1. 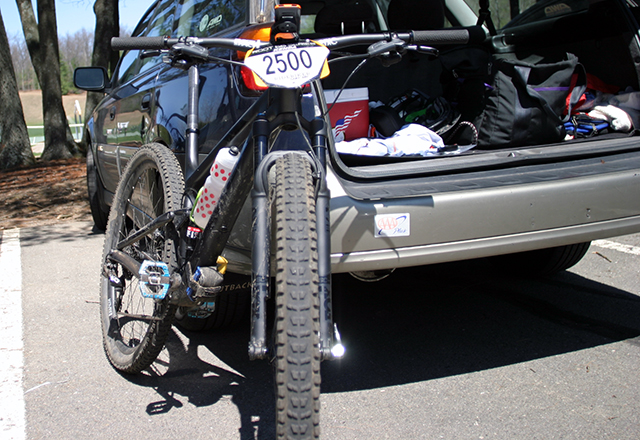 The OE carbon stem is 70mm long. I’m mostly legs, short torso and long-ish arms—so I put a 35mm stem on the cockpit. Changing a stem is a cheap, easy way to fit a bike to you. Seems like a small thing, but in XC racing you tend to obsess more about small details like stem length, tires, air pressure, bottle cages, saddle angle, cockpit setup, computer mount and on and on.

The front/rear 2-position suspension lockout is where a dropper lever might be. GW photo.

The Top Fuel does not come with a dropper at any spec level. It has a super-light carbon seatpost, which helps keep the bike around 24lbs. I did throw on a dropper for one of the more technical races, and was glad I did. Though with the lockout and a dropper, the handlebar felt a bit crowded, but not unmanageable. Truthfully, I did ride a good bit without the dropper and got used to it. 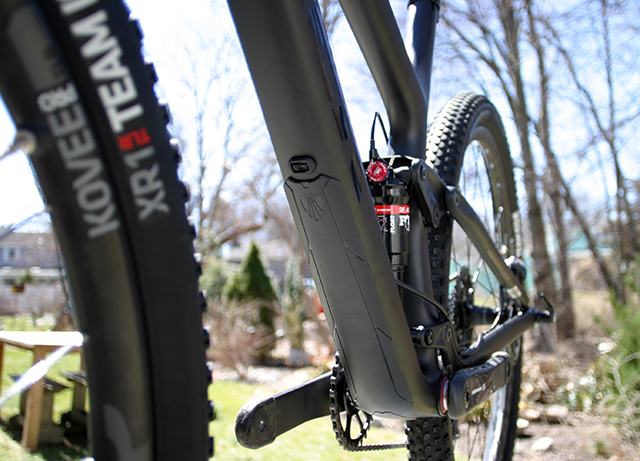 The frame is slick and elegant, as are pretty much all Trek frames. If you buy this bike, you better like black. The carbon front, seatstays and aluminum chainstays are seamlessly integrated. Setting up the fox fork and shock is very quick. Fox’s float components are designed to be plug-and-play. 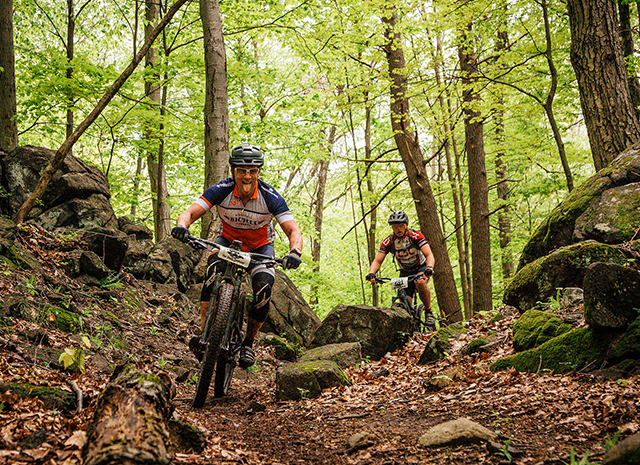 Now we come to the big leap forward for this 2017 bike. Trek’s Top Fuel experience is about the custom Re:Aktiv shock’s updated regressive valving and its simple, two-position switch. 1) Firm and 2) Locked. Boom, that’s it. When Trek first told me about this I was like “Aw, man. I’m sure it’s a fast, light bike and all...but am I in for two months of taint-punching race riding?” 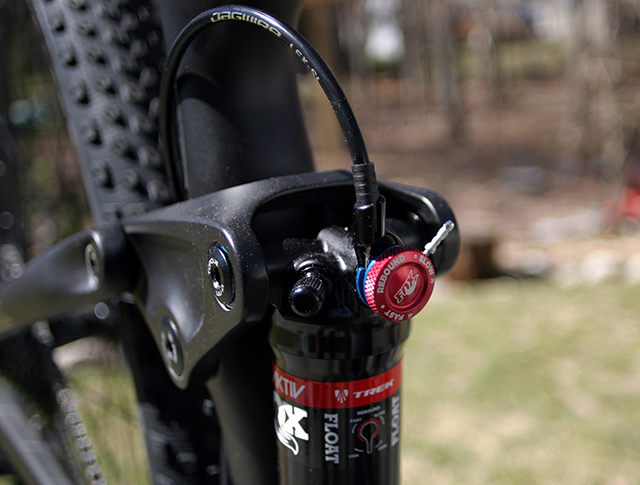 However, Trek was confident that, aside from smooth courses or situations where you should lock the frame out, the open position was not only supportive, but plush enough for all purpose riding and tough modern XC courses. Of course the bike still has Trek’s proven ABP (active braking pivot) technology and Full Floater shock mount. 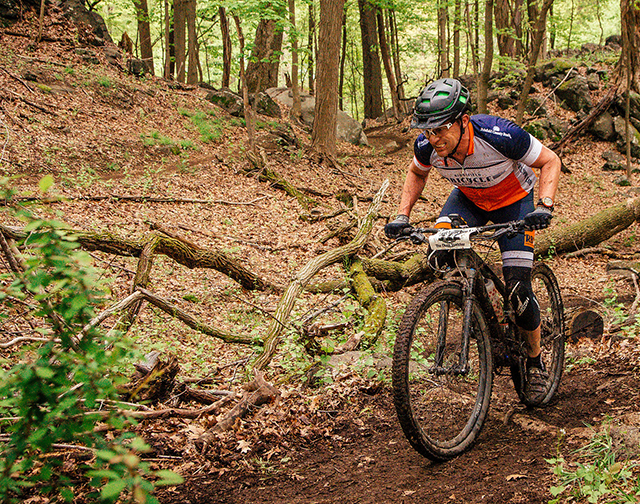 Suffering. And then suffering some more. NYS Racing photo.

I raced the Top Fuel in 4 races, one early season tune-up, one super smooth roadie-fest, one super-technical mudfest called the Chain Stretcher (where they purposefully and willfully set the course to knock roadies out of balance), and one other fast and very flowy one. In the super fast, no-tech tracks, hardtails seemed to have the edge, but for tough tracks, this bike shines. Bright. The Top Fuel keeps peppy and quick all the way through your ride, allowing you to finish strong and have some fun.

Early in its travel, the Re:Aktiv regressive valving maintains a linear and firm shock rate. It then ramps up in mid-stroke to be a bit more progressive. However, at any point in its travel, for medium and big hits, or over rough terrain, the shock opens up and becomes instantly supple. I have absolutely no idea how it knows how to do this, but it knows.

Here’s a quick video on the tech.

Again, the two settings on the handlebar-mounted lockout are either fully locked for both fork and shock or open, which puts the shock in its firm, ‘wonderboy’ mode and opens the fork.

After a few rides, merging the usual firm and open capabilities of a 3-position shock actually makes perfect sense, not to mention massively simplifies everything. I either want to push the gas hard in locked out mode, or I want the shock be firm/open for supple travel when the going gets gnarly.

When you’re pushing hard and concentrating on racing--eyes bleeding, legs burning, your whole body in the pain box--you don’t want to think about three positions. 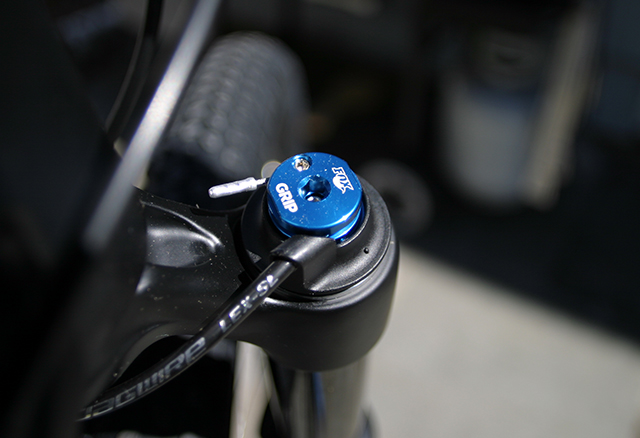 With a 70-degree head angle, the Top Fuel’s steering is super fast and responsive. This is where the ‘getting to know it’ phase is. The better you can handle a bike the more you’ll enjoy it. Ride it like a champion fencer, cutting and thrusting precisely through a course. While the Top Fuel doesn't have 65-degree head-angle impunity, I never went over the bars or felt sketchy. You just have to slice and punch with some accuracy.

Sometimes you just have to enjoy that next uphill. Chain Stretcher photo.

It climbs great (a 74-degree effective seat tube angle helps). Just like an XC bike should. Really, that’s job one for any XC bike, because it’s where races are lost and won. So check that box for this bike and move on.

While the suspension can handle punchy climbs so well, it's still ready for an unexpected log-over, root section or big hit. That's where I found the Top Fuel to have a remarkable advantage over other XC bikes: it’s ability to flow right from fast to tough. Guys on hardtails look like baby giraffes on long root sections but the Top Fuel mashes through with no problems. 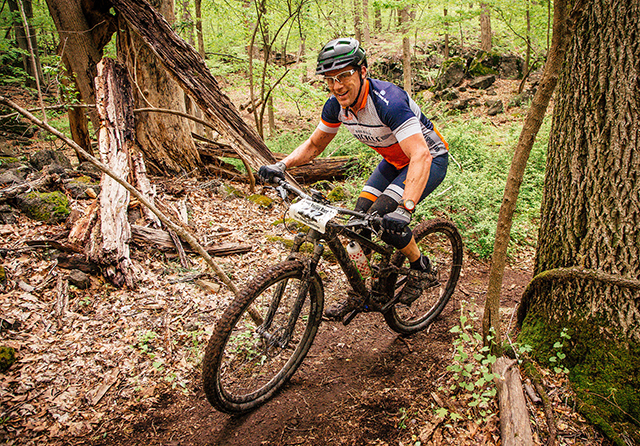 The SRAM X01, 11-speed drivetrain was always smooth under the toughest, most demanding (and occasionally ill-advised uphill) shifts. If you’re so inclined, The Top Fuel 9.9 gets you SRAM Eagle, which has 12 speeds and a 50 rather than 42-tooth top cassette ring. Might be nice if you need it, though not having it forces you to push without bailing to a too-easy gear.

The SRAM Level brakes (the lighter, XC race version of their capable Guide brakes) also had no issues. Through the mud and muck they stayed true without rubbing, squealing or fading. They still work like new. 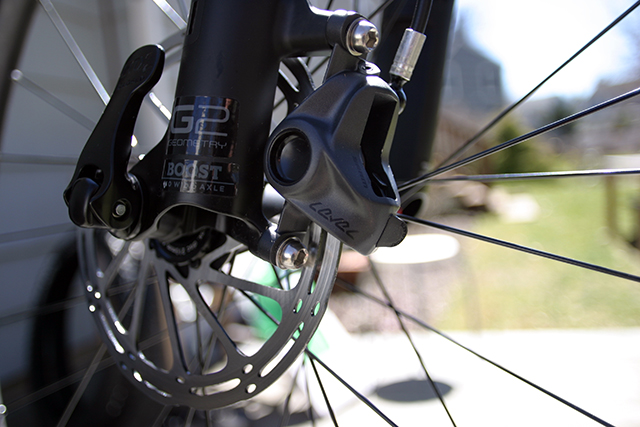 The SRAM level brake. More than enough power for XC and smooth like the guides. GW photo.

The bike has a Mino-link flip chip, but leave it in the low position. It comes that way, no reason to change it. It’s there if you want to experiment. I didn't touch it. 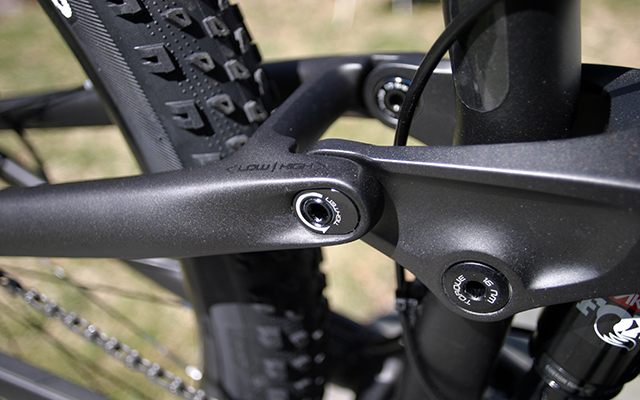 I feel like leaving it in 'low' is the tip. But go experiment for yourself. GW photo.

Because Trek’s jam is making bikes more versatile than their intended design, I took it on a few trail rides. Powering up and keeping speed are, of course, easy on this bike. This is also where the Re:Aktiv tuning gives you the plushness and ability to ride the bike with comfort and a bit more playfulness. The geometry is still racy, so you have to handle it. Descend with precision and you're able to hit any trail you'd normally ride on a longer-travel bike.

Once again, Trek has put out a bike that's great at what it's made for, but is also really good at something else. The Top Fuel is, first and foremost, a race bike. It's light, fast and stiff—so go out and race it. Your secret weapon will be how well it handles rougher courses and sections that toss hardtail roadies. It's also really tough, with low-stress brakes and shifting which hold up great on trail rides. Add a dropper and some beefy tires and you've got yourself a short-travel trail bike rocket. It's enjoyable as a precise, not slacked-out, ride. 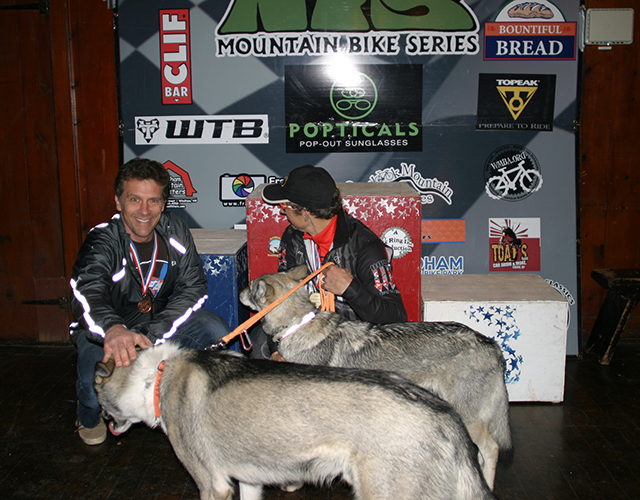 When the guy who wins has wolves that want no part of the platform, then the podium comes down to the wolves. Pete Scannell photo.