Trevor Kennison Is Paving the Way for Adaptive Freeskiing 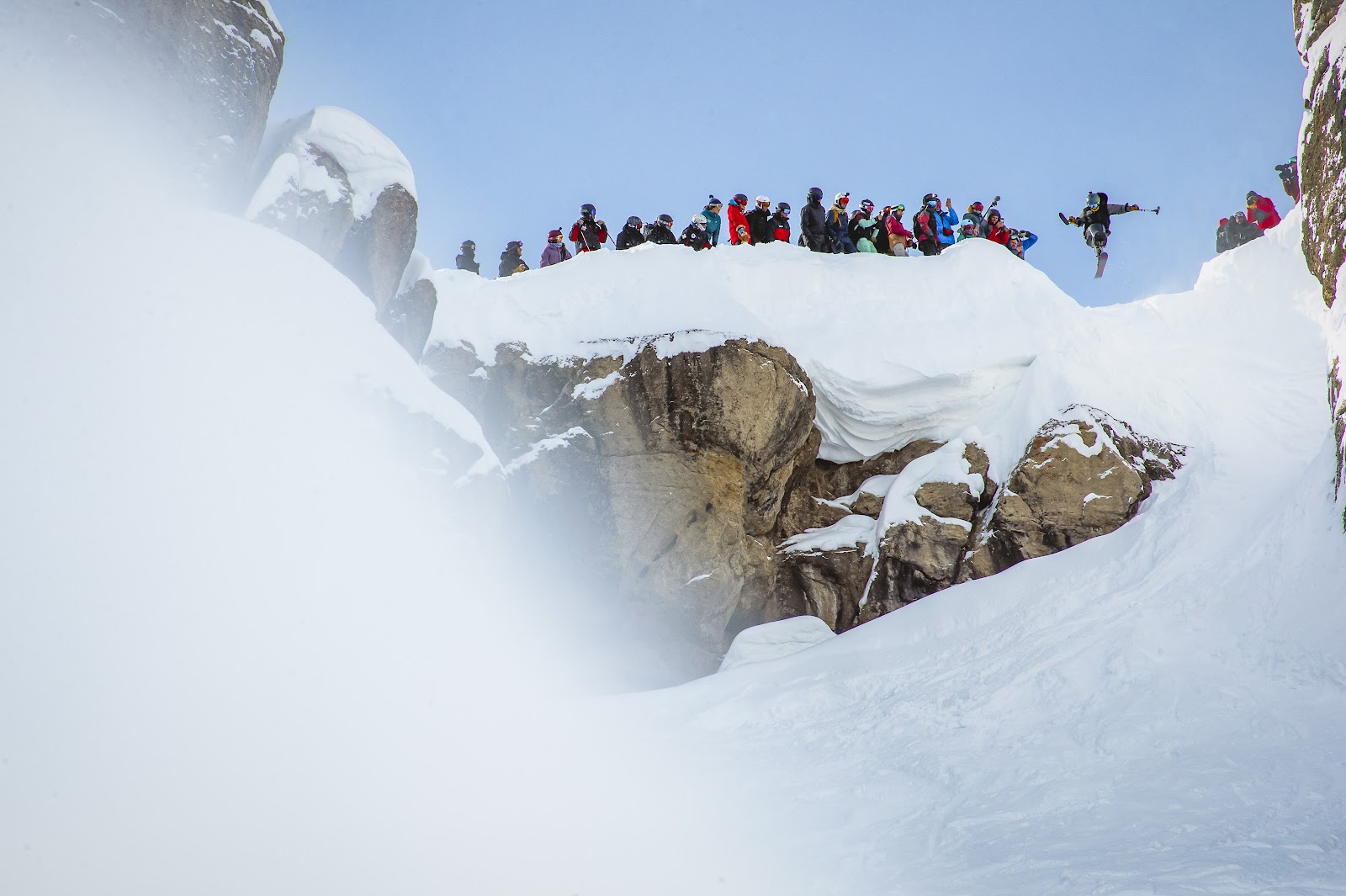 Kennison has wanted to hit features like Corbet’s since day one in a sit ski. Now he's paving the way for adaptive freeskiing. Nic Alegre Photo.

The first jump Trevor Kennison ever hit on his sit-ski was about four inches tall. While it was a brief moment in flight, that feeling was enough to hook him and dream big. Throughout his whole life, Kennison has been a person who’s sought out adventure. Raised by two marathon runners, his parents had him into all kinds of sports at an early age. It wasn’t until moving to Colorado in 2013 after high school, that he focused his attention on snowboarding. It became an integral part of his lifestyle—you could always find him somewhere on the mountain.

RELATED: Kings & Queens of Corbet’s Photo Saga: Sending it to the Moon

He especially loved riding in the backcountry, but in 2014 a day spent on Colorado’s Vail Pass went terribly awry for Kennison. Hitting a 10-foot kicker, Kennison caught an edge as he launched off the lip. Foreseeing the impending crash, Kennison tucked his neck and crashed hard onto his back. The force of the crash fractured his T11 and T12 vertebrae, punctured his spinal cord, and dislocated his back. Stunned and writhing in pain, Kennison laid there as a blizzard swirled around while his friends called for help. Three hours later, search and rescue brought him to a hospital in nearby Frisco where he’d learn the severity of his injuries. He was now paralyzed from the waist down.

His sister Ashley didn’t see this as a closed door for Kennison, instead, she and her husband pushed him to try sit-skiing. Guided by the mentorship of the Adaptive Sports Center in Colorado and the High Fives Foundation, Kennison quickly progressed. For him, the sit-ski was still two edges, and as a result, his style is a blend of snowboarding and sit-skiing.

In his first week of sit-skiing, he wanted to be hitting black diamonds. Turns out all he needed was three days. Building on this momentum, the High Fives Foundation invited him to a freeski and racing camp in California. While it was meant to be a training session, the fastest skiers were also given the chance to compete at Nationals. To Kennison’s surprise, he was selected and invited out to Loon, New Hampshire for the race. That first major competition was no easy task, but regardless of how he placed it showed him what was possible for the future. 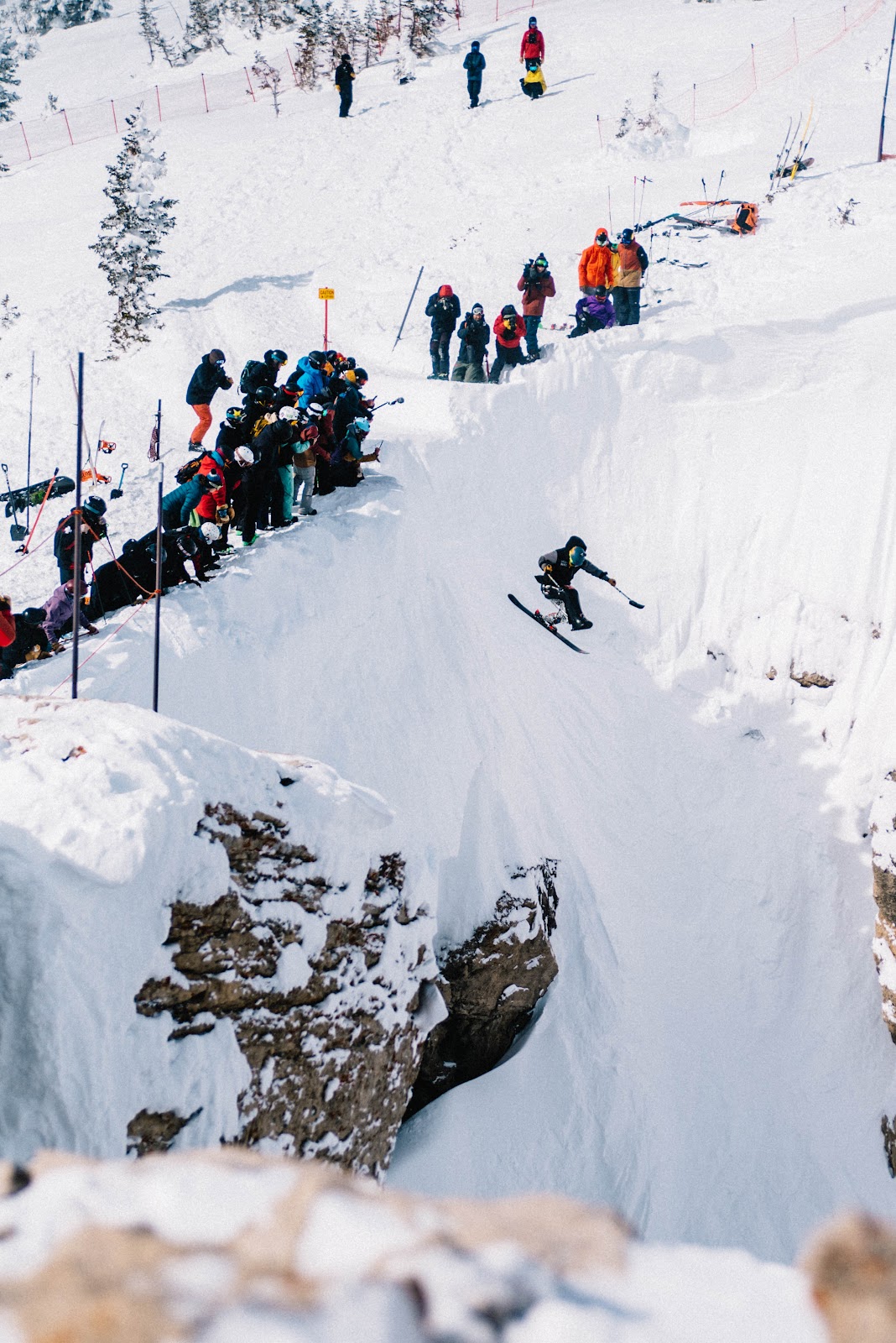 The next goal for Kennison is integrating tricks into lines like this. Katie Lozancich Photo.

Now he’s racing with hopes of landing a spot on the U.S. Paralympic team for the 2022 Winter Games. But Kennison’s sights are set far beyond ski racing. Right now, few avenues exist for adaptive skiers when it comes to freeriding. Kennison is determined to change that, and hitting Corbet’s and winning the Bryce Newcomb Rider’s Choice Award was step one in the process. Next, he’s eager to integrate tricks like a backflip into his repertoire, which he’s been diligently working on at Copper Mountain’s Woodward training facility. Meanwhile, Kennison keeps himself busy skiing all over the globe, from Japan to Jackson Hole, redefining what’s possible along the way.

We caught up with Kennison to learn more about the experience and his goals moving forward.

Where did the idea of hitting Corbet’s come from?

TK: Corbet’s has been a goal of mine since I got injured. It’s just Corbet’s. I never imagined hitting it from the top where everyone else was dropping in.

How did you prepare?

TK: I drove up from Freeride World Qualifier (FWQ) 2-Star event in Crested Butte. They told me I couldn’t jump—which is funny. I ended up doing a baby cliff and caught a couple of feet of air. When I was traversing across I clipped an edge and broke my ski. Of course, I got the email from Jess McMillan confirming Corbet’s that afternoon. I ended up rushing back home in a blizzard to get my things, dropped by Park City for a new ski, and zipped up to Jackson in time for the athlete’s party.

There I met Matt Doherty, who’s been out here for six years and actually broke his neck and back two years ago. Long story short, he saw my Instagram when he was injured and it gave him hope. He approached me to ski and catch an early tram the next day. The next morning we met up and went skiing the whole day. The last run of the day—or you know two more and skip the last—we hit Daydream, the classic Inbounds Jackson Hole cliff.

He took me over there with his buddy Wilson, and we hit it. I stomped the landing and that’s what set the tone.

How did you feel leading up to the event?

TK: I was pretty nervous, but I also wanted to get it over with—meaning the contest. I’d hit Corbets again regardless after it was over. The whole contest with cameras and the crowd was nerve-racking, but it was also what I wanted.

Pushing up for my jump we went 15 feet above and I ended up pulling out and making an immediate stop. I stopped because I didn’t have enough speed. That being said, I ended up getting pushed up to where everyone else was jumping.

There’s a little routine I do where I close my eyes, turn my outriggers in, and take a couple of deep breaths to get into the zone. I usually do it once and then go. This time I did it about five or six times. I checked with Eric Seymour to see if he was going to say ‘dropping’ but he told me I could go when I felt ready. So, I did the routine one more time and then went for it.

How about actually dropping in?

TK: From how I was jumping the day before, I knew I had to stick the second bounce. I just didn’t know how high I was going to go. People always tell me that they think I went bigger on that second bounce. Hopefully, I get invited back, I want to pull a backflip on one of those jumps at the bottom.

Do you feel like Corbet’s opened the doors to what’s possible?

TK: Yeah, I’ve always had other things in mind. Say I need a sled to get into the backcountry? All right, done. Any of those guys [from Corbet’s] I can reach out to. Teton Brown wants to do the backflip with me. I want to do a backflip, a road gap, a road gap backflip, backflips off of cliffs. I’d start with small cliffs and progress, but I want to keep pushing the sport.

I want to ski enormously steep technical lines and just grow. I’m super excited to see what comes from this.

Kennison's Run even made it on SportsCenter

What do you need to make these goals possible?

TK: Having the backcountry to set something up—especially the deep enough snow. I’ll have a neck brace and back protector and do everything smart, but that’s what I want. Also, it’s important having access to the athletes I met at Corbet’s—Travis Rice or Karl Fostvedt, because they’re the ones pushing me to be better.

The community plays a huge part in the progression. It sounds like Jackson really resonated with you.

TK: I’ll always love Winter Park, but it doesn’t have the kind of technical cliff features that Jackson does. That’s why Shane McConkey went out to Squaw—you know? All these big time skiers call these bigger mountains with legit terrain home for a reason. I’m excited.

TK: Yeah, I’m really close to making the U.S. Paralympic Team. But that's the only competition they really have for sit skiers. Don’t get wrong, ski racing has helped tremendously, but at the same time, I love freeriding.

If I could film for as long as I could and travel—that would be my dream.

Cause there isn’t any sort of slopestyle for the Paralympics?

TK: No, I’d love to get adaptive skiing slopestyle in the X Games or Dew Tour and make it a Paralympic sport. Eventually, I want big mountain adaptive skiing to be recognized as well. I’m on the right track, I’m doing a couple foreruns for the FWQ and after doing Corbet’s it proves I can ski technical lines.

It’s really cool moving forward with this and giving that hope to someone else is more than I can ask for—that’s what makes me happy.