Tristan Greszko - Through the Lens 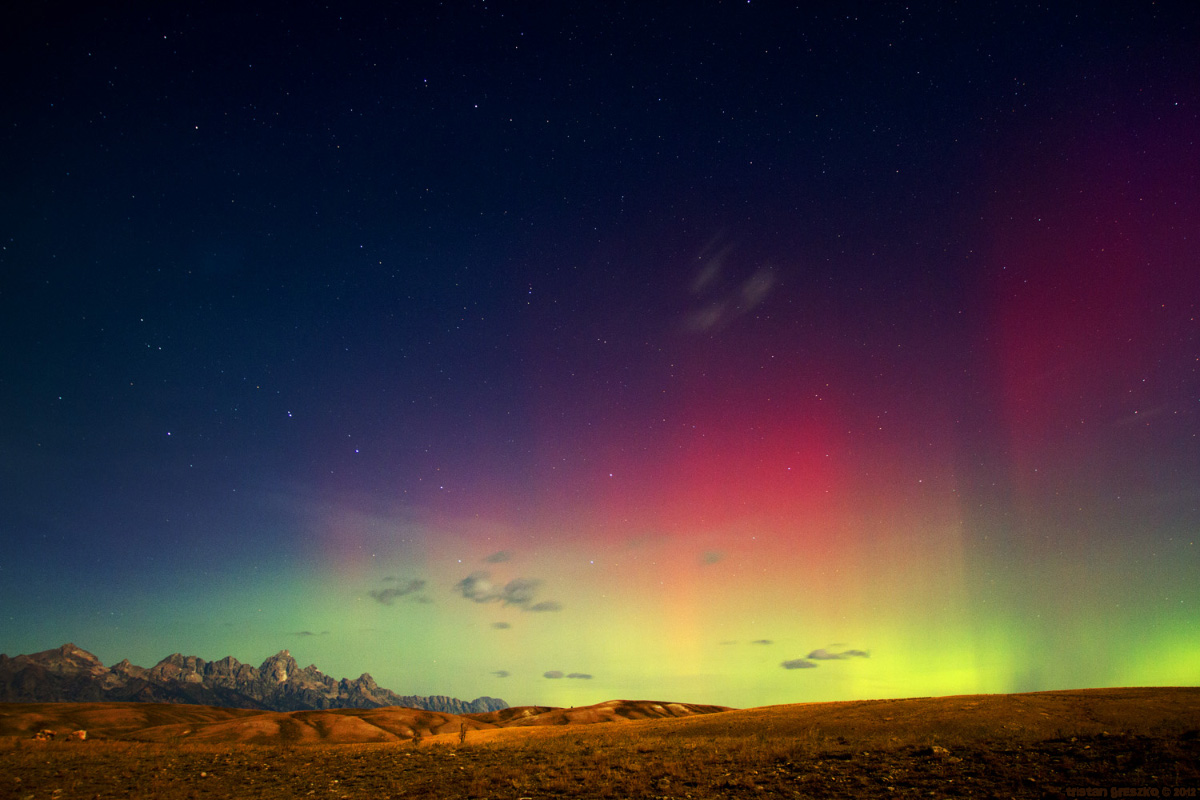 “Through The lens” is a regular column on TetonGravity.com that highlights the work of a photographer in the ski and snowboard industry. The series exists to celebrate the photographers who bring us extraordinary imagery, to get to know who they are, and to understand their process.

Tristan Greszko, a gifted athlete and photographer based in Jackson, Wyoming, is known for his creation and adaptation of unique angles in photo and art imagery. Greszko enjoys working in various artistic mediums including alternate photo processes, screen-printing projects, film, and other creative outlets. His work on projects like the Tiny Jackson Hole video (below) in 2011 catapulted him overnight into the public realm. And, as local lore goes, he is one of a handful of skiers to straight-line “Once is Enough,” a serious and steep line in the JHMR backcountry.

Greszko took art classes in high school and later began to develop his photo skills through on-snow work in Vermont. After moving to Jackson in 2006, Tristan co-created the Teton Artlab, developing this multi-purpose, non-profit venue to provide affordable workspace for local artists. The lab maintains a quirky and creative atmosphere in which artists congregate and collaborate.

Keep an eye out: With his distinctive captures and creativity, Greszko explores new ways to share his world of photo and art from a deep well of talent. 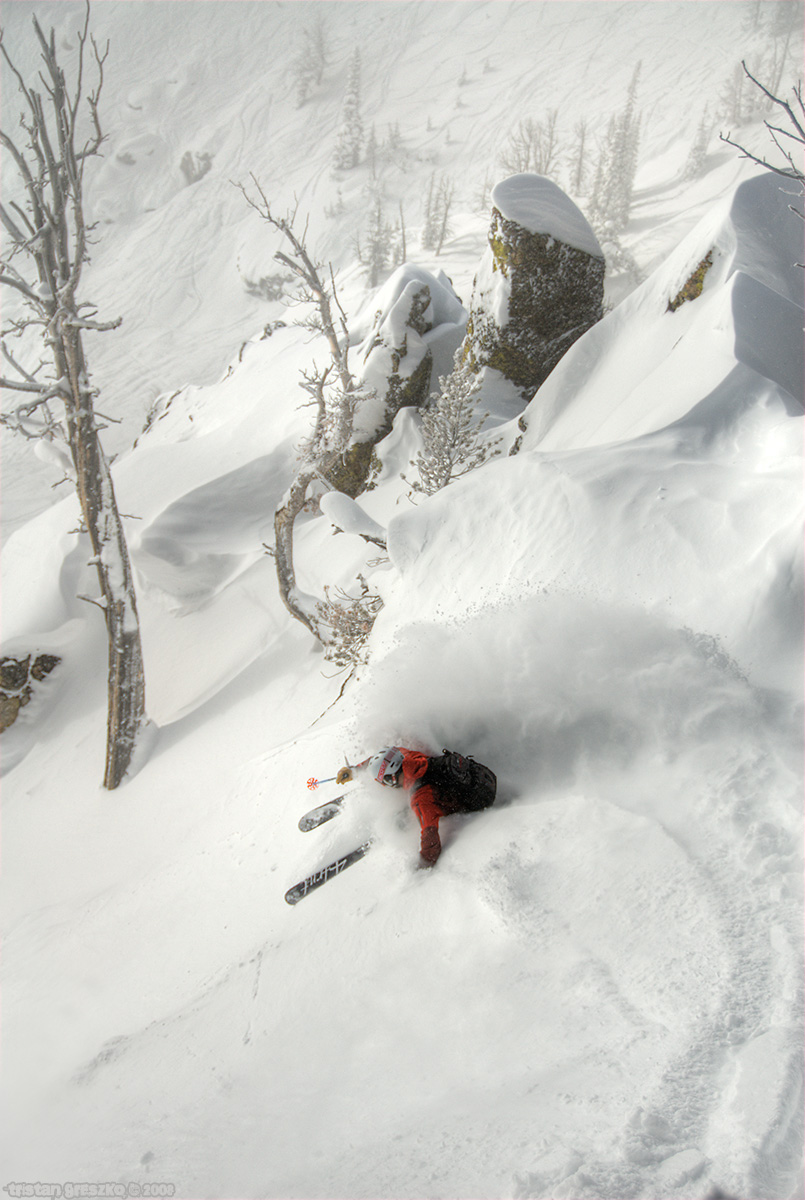 In 2005, I moved from Atlanta to Vermont for a job snow reporting at Okemo and was in charge of shooting “Photo of the Day.” I also bought my first camera and shot the now-defunct Vermont Freeskiing Open. The years between 2005 and 2010, I spent almost every waking hour immersing myself in photography, learning, failing a lot, and collecting a few decent images here and there.

In 2010, after 4 years working in the Jackson Hole Mountain Resort marketing department, I left my job to devote more time and energy to being a professional photographer. By that spring, I felt I had a strong portfolio and a skill set competent enough to finally, truly call myself a photographer. And now, two years later, I feel like I'm starting to produce some great images. So, I feel like, in many ways, I'm just getting going. 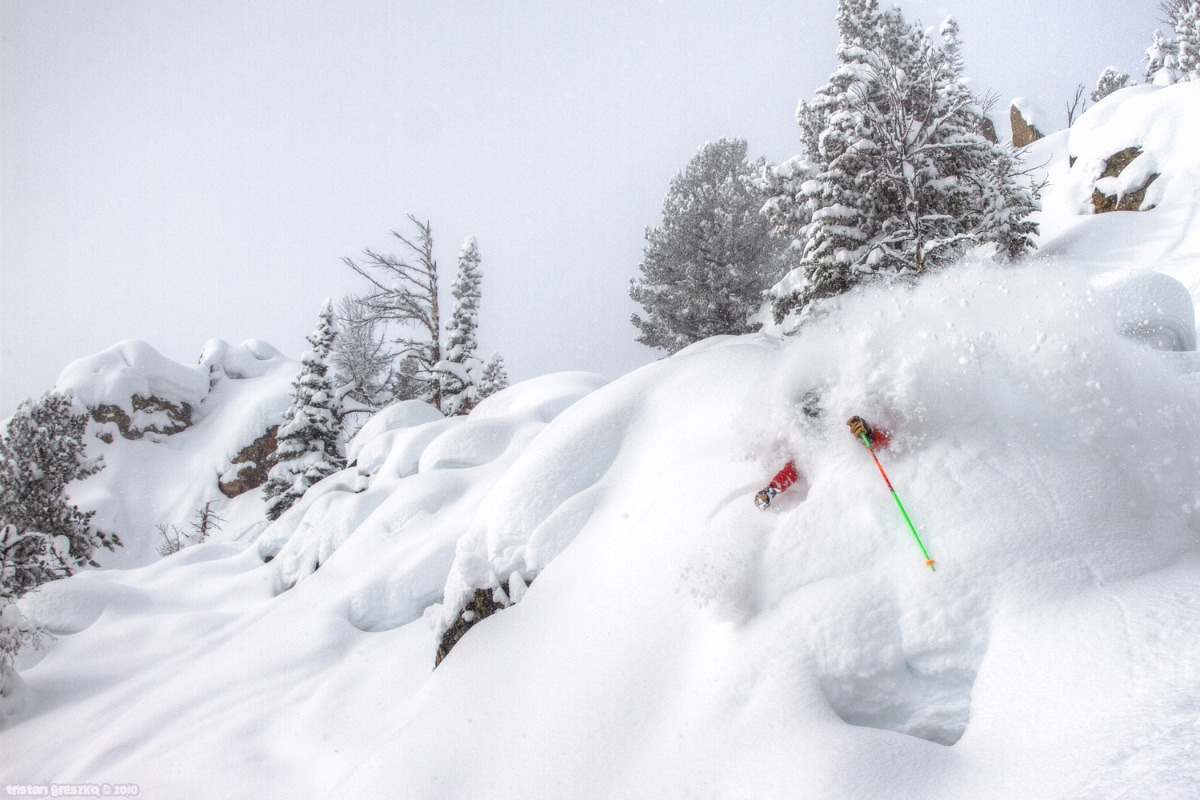 The most obvious choice is my dad, though it comes with a big footnote. The older I get the more I realize how similar we are in so many ways. He had a rare, boundless curiosity about the world, a mischievous sense of adventure, and was obsessive about his interests, which I very clearly inherited. He was a technically perfect, beautiful skier, had a dark sense of humor, tinkered with art and photography, and had a passion for the mountains that bordered on religious fanaticism.

He [my Dad] was a technically perfect, beautiful skier, had a dark sense of humor, tinkered with art and photography, and had a passion for the mountains that bordered on religious fanaticism.

The footnote is that both of my parents died when I was 14. I was just a naive little kid in 9th grade when it happened, so I say all this after many years of reflection, coming to terms with it all, and you know, building up a bit of a mythology about who he was. It's hard to say if I'd be as driven or independent as I am today if I had a more normal, happy childhood, but his influence is undeniable and I couldn't imagine a better life in spite of it all.

There are a few industry people that inspire me, too, right now:

Steve Casimiro of Adventure Journal has a wonderfully articulate way with words and images that explain this eternal search and the insatiable lust for adventure that we're all seeking. He does it casually and poetically, and very well.

Curt Morgan of Brain Farm Cinema … Well, there's no one like Curt out there. We went to the same high school back in New York. He has accomplished some very big things to say the least.

Tahoe photographer Andy Bardon is a good friend of mine who shares a similar aesthetic and work ethic, and is a machine in the mountains. It's been awesome seeing him start to blow up. 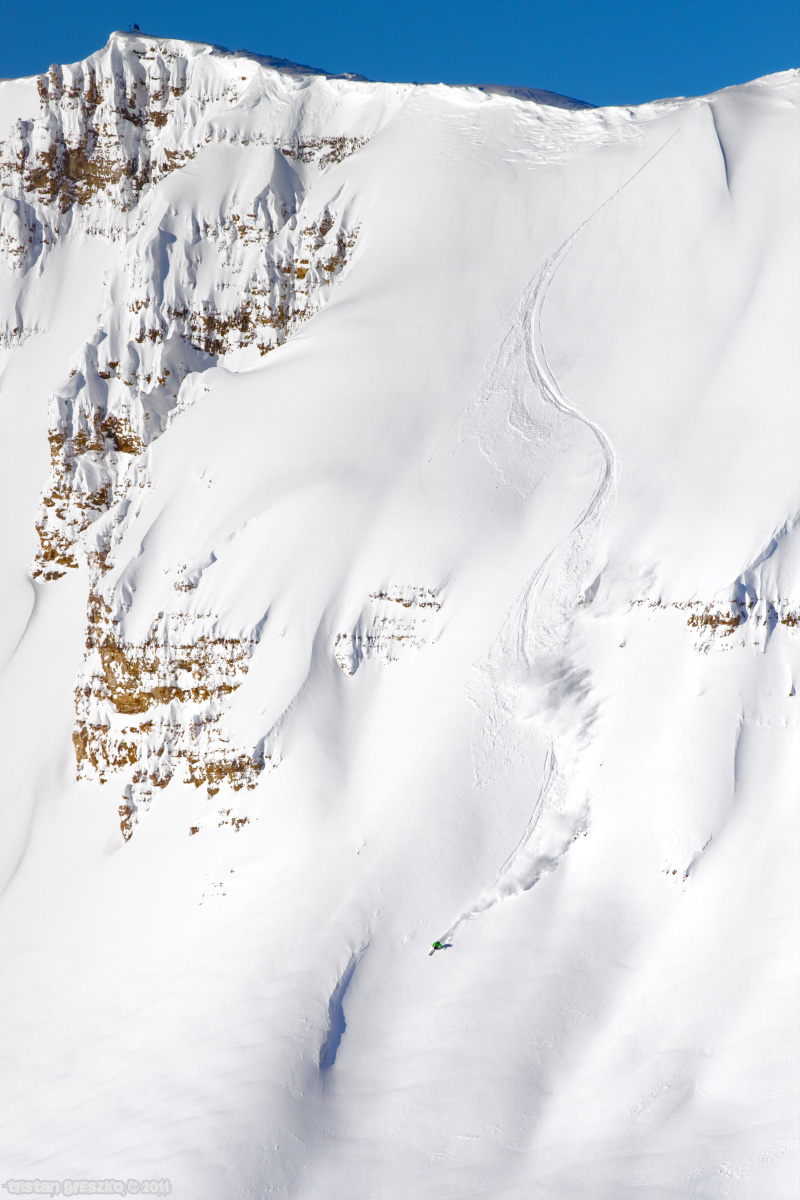 I think my goals are pretty simple. I'd like to sustain a lifetime of exploring, adventuring, and being curious about the world, and working really hard and dreaming big. I'd like to think that my work inspires people to live better, and seek out richer, more rewarding experiences too. Hopefully, I can continue to find amazing people along the way to share the adventure with — finding and keeping interesting, passionate people around me is always an important necessity. And, as for my dreams, well, I'll just keep those to myself for now. I like it better that way.

I'm at a point where I'm confident, have some momentum, and feel like I can do some big things if I start pushing and putting my work out there. I like to fly under the radar and evade unnecessary attention but when I think about where I've come from in the past few years—and what I'm capable of now—I'm really excited for the future. I'd like to step up into a much bigger arena and work with bigger clients: The North Face's, Patagonia's, Red Bull's and National Geographic's of the outdoor/adventure world. 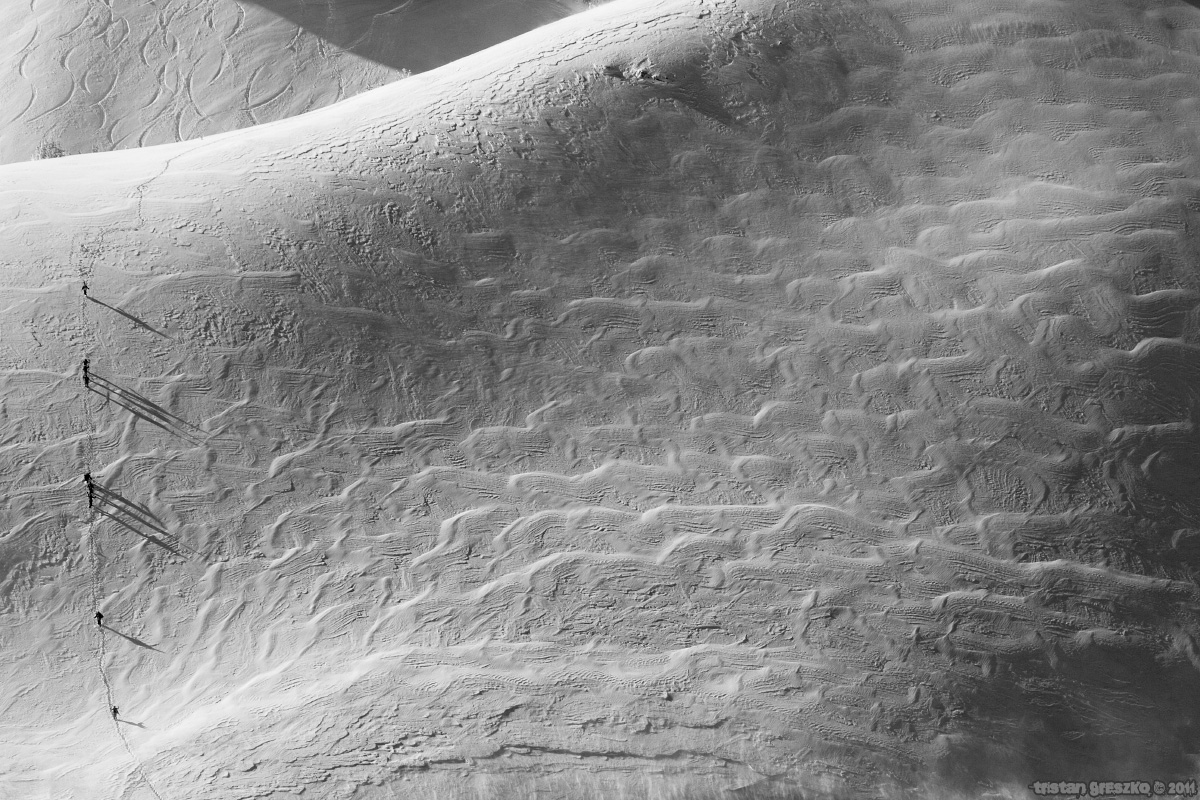 “The advice I like to give young artists, or really anybody who’ll listen to me, is not to wait around for inspiration. Inspiration is for amateurs; the rest of us just show up and get to work. If you wait around for the clouds to part and a bolt of lightning to strike you in the brain, you are not going to make an awful lot of work. All the best ideas come out of the process; they come out of the work itself. Things occur to you. If you’re sitting around trying to dream up a great art idea, you can sit there a long time before anything happens. But if you just get to work, something will occur to you and something else will occur to you and something else that you reject will push you in another direction. Inspiration is absolutely unnecessary and somehow deceptive. You feel like you need this great idea before you can get down to work, and I find that’s almost never the case.”

The most important thing I've learned is to get out and actually DO what you want to do. It’s important to go out and TAKE it instead of sitting around waffling about it. If you pursue something long enough, you'll find an audience, and you'll definitely find a way to get by, and probably thrive.

The most important thing I've learned is to get out and actually DO what you want to do. It’s important to go out and TAKE it instead of sitting around waffling about it. If you pursue something long enough, you'll find an audience, and you'll definitely find a way to get by, and probably thrive. A lot of people think giving it all up and moving to the mountains is crazy but I think the opposite is true. It’s crazy how most people live—working in an anonymous job in an anonymous city. I work hard to stay afloat but it rarely feels like I'm truly working, at least not in the way it felt before I moved to Jackson. 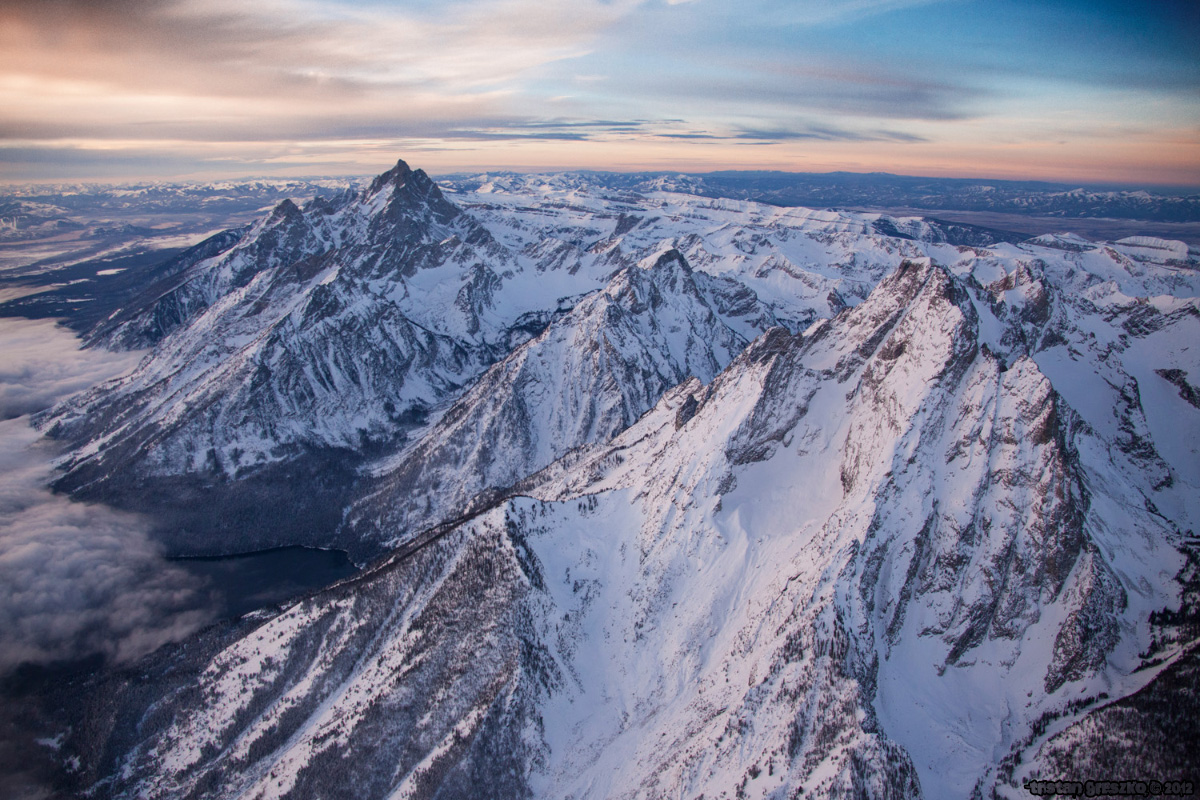 I like shooting with the unknowns—the people who you've never heard of and who ski harder than most and keep their mouth shut about it. Skier Andrew Whiteford and I shot a lot when we moved to Jackson and he's done really well for himself. Good friend and ripper AJ Puccia has been another favorite athlete. There are a few other shots of people you've probably never heard of that are some of my favorite photos ever. These are all athletes that can do anything you ask, happy to shoot, look good while doing it, and are super humble at the same time.

I crave frequent change, stimulation, and novelty. Lately, I've been shooting a lot of random personal projects like some short videos of this summer's crazy wild fires (in Big Piney, WY and Jackson) and photos of the Northern Lights that were going off in Jackson in the early fall. I've also been road tripping all over the West for the past two years shooting a whole range of weird, amazing locations. And, I just completed an exciting Teton aerial shoot that I've wanted to do forever. 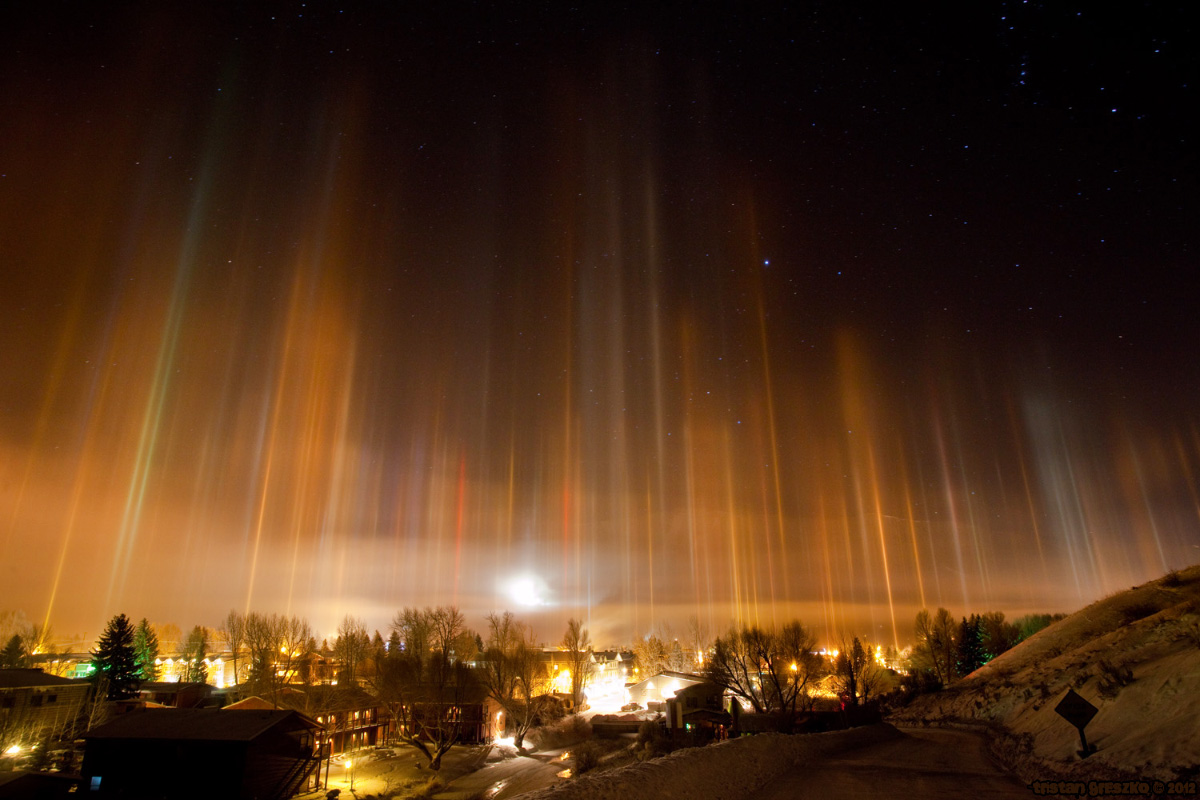 Remote control/drone platforms are definitely next in line to blow up big time. Where the military goes, so goes civilian technology. I bought a Cinestar 8 multi-rotor helicopter this past spring. It's already allowed me to shoot some stunning photos and video, but I'm basically still operating with training wheels. When it all comes together, the cinematography and unique perspectives are really stunning.

Construction of the Jackson Hole Tram - I have thousands of shots of every step of building the new JH tram over the two-year construction period. No idea what I'll ever do with them but it's awesome to have been the sole photographer on such a piece of history that's so close to the community.

Tiny Jackson Hole - I spent a ton of time, 400-plus hours making that video and the response blew me away. It was a labor of love for sure and I couldn't be happier with how it turned out.

Alpinist Spread - Alpinist 33 featured the Grand Teton as that issue's mountain profile. One of my favorite shots ever run was a double-page spread on the opening page of the article, Grand Teton: A Map of the Wild by Renny Jackson. Given the Grand's influence on American alpinism, it was an honor to be in such legendary company.

JH Tram Heli Shoot, 2009 - We did a sunrise shoot of the new tram with Corey Gavitt of TGR. It was my first time shooting out the door of a helicopter, with patrollers throwing bombs below us, patrollers dropping into Corbet's, and the new Tram in perfect morning light.

TGR/Erik Roner ski-BASE of Cajun Couloir - Erik Roner is an amazing guy and completely nuts. So, seeing him ski base Cajun while perched up above in the old tram was a really special thing though the anxious anticipation beforehand was really intense.

Aerials in Indian Creek - the first time I shot climbing with the “Octokopter “- also completely terrifying flying the helicopter off the top of a giant boulder and trying to ease up next to a climber 80 feet off the deck but overall it was a great success and learning experience. It took me another three months before my first epic crash! 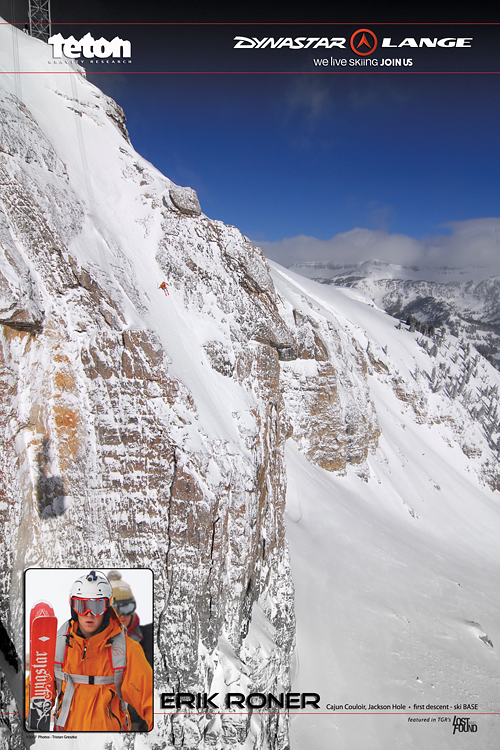