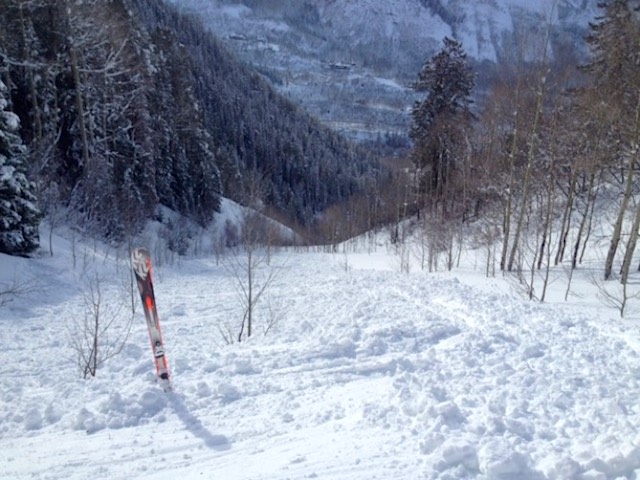 Looking down the slide path near Richmond Hill in the backcountry outside Aspen Mountain that killed one man yesterday. CAIC photo.

Wednesday, February 26th update, 7:45 a.m. MST: We here at TGR were saddened to report on the death of an unidentified male yesterday who died in an avalanche off the side of Aspen Mountain Monday afternoon. According to a new article from the Aspen Daily News, the victim has been identified as longtime Aspen local, 64-year old John Martin "Marty" Gancsos. Gancsos apparently had 40 years of backcountry skiing experience, was regarded by locals as a fine expert skier, and one who knew Aspen Mountain in particular inside and out.

According to the original article by the Daily News, Gancsos and his backcountry partner were skiing a West-facing gully below treeline that descends towards Castle Creek Valley from the Ruthie's Run side of Aspen Mountain when a soft slab avalanche broke free from a layer of old snow, catching Gancsos and carrying him to the bottom of the gully before burying him. 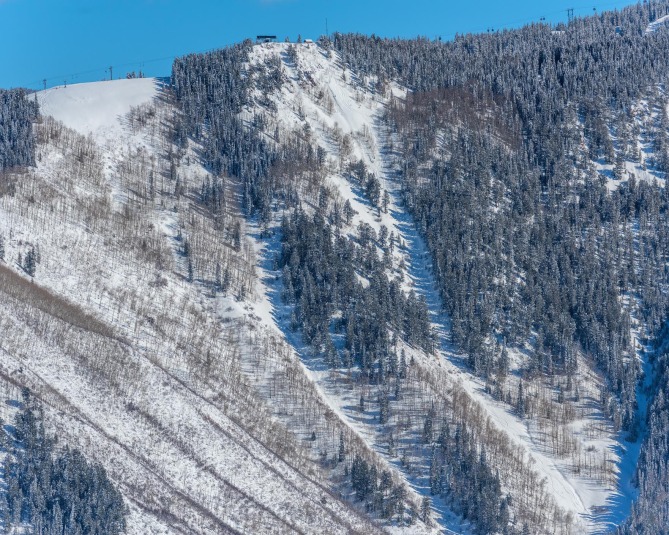 Looking across the valley at the site of the avalanche, which occurred in the lefthand gully in the picture, known locally at Ophir Gulch. You can see the Ruthie's lift on Aspen Mountain in the background. Dan Bayer photo via the CAIC.

According to the preliminary report from the Colorado Avalanche Information Center, "It appears the slide broke above the skier shortly after he entered the slope from the skier's left side. The slide was 20 feet wide at the highest point of the crown face, but widened to about 60 feet after traveling a short distance. The average height of the crown face was 12 inches and the maximum height was 20 inches. The slab was comprised of snow from the two most recent storms. The avalanche released on the old faceted snow that was on the surface prior to February 16. The vertical distance between the highest point of the crown face and the burial point was 630 vertical feet; debris ran another 20 vertical feet or so beyond the burial point. The slope angle in the start zone ranged from 38-40 degrees. The slope angle in the track was between 30 and 35 degrees." 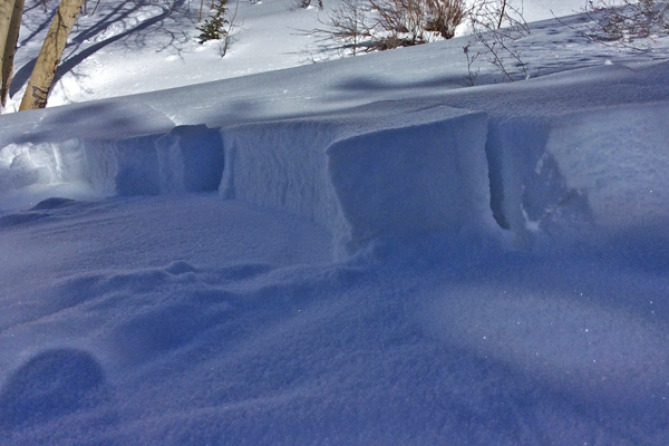 The crown of the avalanche at Ophir Gulch. CAIC photo.

His partner reported the avalanche to Aspen Mountain Ski Patrol around 3:00 P.M. local time Monday afternoon, and while patrol were able to local the victim within an hour, the late hour and existing dangerous conditions convinced them to return for the victim's body early this morning instead. A five-person team from Mountain Rescue Aspen recovered the body and brought it down from the mountain by 8:30 Tuesday morning.

Avalanche conditions in the Aspen area have been listed as Considerable for near and above treeline areas, and Moderate for below treeline areas, and the Colorado Avalanche Information Center warned this week against riding any slopes steeper than 33 degrees. "At all elevations, last week's snow has consolidated into cohesive slabs - the most pronounced, distinct slabs since New Years," today's report for the Aspen area states. "These slabs are 1-2 feet thick and can break on or below crusts, sugary facets or buried surface hoar that developed near the old snow surface during the midwinter drought."

You can keep up to date with local information about the incident in the TGR Forums.

In a separate, unrelated incident, a 22-year old California college student studying at the University of Colorado Boulder, Jacob Koltun, died in an accident in-bounds at Breckenridge Ski Resort in an expert area off Peak 7 Monday. No more information is available other than that Jacob was apparently not wearing a helmet. This limited amount of information comes courtesy of ABC 7News Denver.