Ever since Rocky immortalized the stairway to the Philadelphia Museum of Art, these steps have seen the likes of thousands who pay homage to the boxer on the daily. But this year, Philadelphia received its most unique tribute yet. Olympic gold medalist snowboarder Sebastien Toutant, aka Seb Toots, arrived at the city of brotherly love to pay his respects, except he didn’t go up the stairs, he went down. With a little help from an installed rail, Toutant became the first snowboarder to slide down the Art Museum’s 72 stairs. He stuck the landing and his form was flawless, but Seb you forgot the most important part! Where’s your shout out to Adrian?

Rocky references aside, Seb Toots was kind enough to give us the inside scoop behind the project. Here’s what the snowboarder had to say about following Rocky’s footsteps:

Where did the idea for this project come from?

ST: It was an idea from the Red Bull U.S. team. I’ve known about Rocky, Philadelphia, and the steps, but I had actually never been to the stairs before. Red Bull came up with the idea and picked me to be the rider. I can’t believe the project got approved so quickly, everything went super well. It was also one of those things where I couldn’t help but wonder if I could actually hit it, because we only had one day to do it. 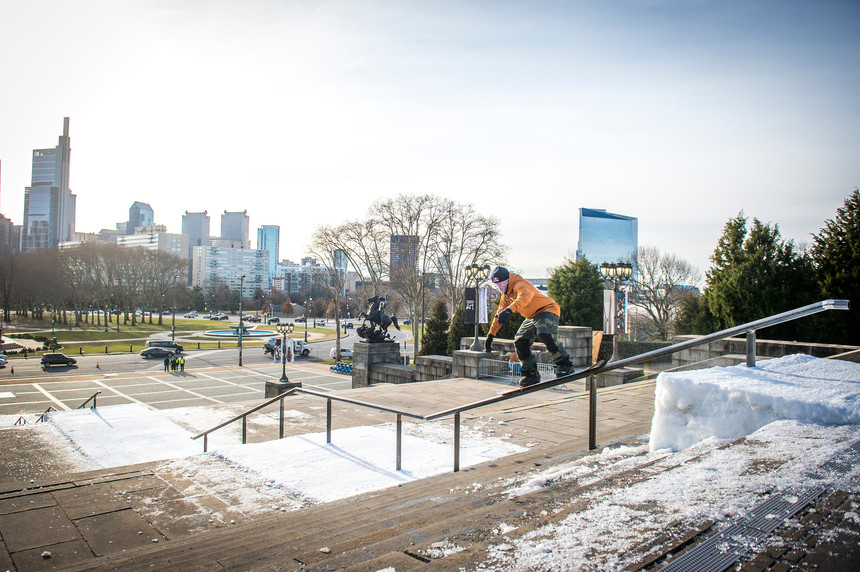 Wonder what Rocky would think of the rail? Tom Monterosso Photo.

It appears that you took a few spills, how many attempts did it actually take?

ST: We had all day, but in the first two hours I got it. It wasn’t the shot we wanted, so we kept going and going. Probably four or five hours later I stomped it and I felt like it was the better shot. I’m really picky, which kept me going all day. I pretty much hit that rail from 9 a.m. to 4 p.m. It was definitely a good workout, but thankfully the whole crew was really nice and professional.

What was crazy was there wasn’t any snow in Philly, so Red Bull had to bring in an ice company. They ordered 20 tons of ice to make that project happen. It wasn’t the best snow, but it rode pretty well for being ice.

What did Philadelphia think of it? Did you have a crowd gather?

ST: There was a lot of people hanging out to watch. The Philly steps are so iconic, and all the tourists and locals go there because Rocky made these stairs legendary. It was rad to see people stopping and watching. Half of the day the stairs were closed, but the other half it was open to the public on the sides. So people were able to walk up and hang out.

It was kind of funny for me because normally when I shoot in the streets you try to be low key because you usually don’t have permission to be riding there.

But with the Philly steps, I was able to ride it down and have a crowd in the streets, which felt pretty awesome. 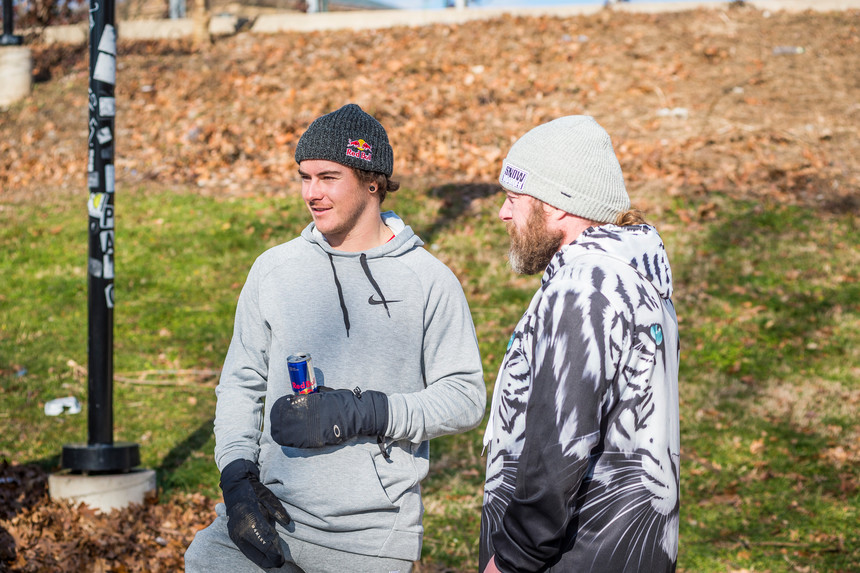 Toutant catches his breath with the legend himself, Pat Bridges. Tom Monterosso Photo.

How did it feel to give a nod to this infamous scene?

ST: It was super fun. The riding part I was already used to, but to be able to do a story was really cool. The acting was nothing serious but I enjoyed paying homage to a few Rocky scenes. I also got to team up with Pat Bridges, who’s the coach in the video, which was awesome. Pat’s such a legend.

Editor’s note: Pat Bridges is the Creative Director for Snowboarder Magazine, and is an overall legend and badass in the industry.

Considering you’re still pretty busy competing, how do you balance these side projects?

ST: Yeah before the Olympics, my schedule was way too busy to take on any film projects. You’re just so consumed with training and contests. But this season I’m able to pick and choose between the bigger contests, which gives me more time to work on projects with Red Bull. With snowboarding, it’s fun to compete, but there’s much more to it than competing. Since I was a kid I’ve been filming, so even though I’m usually doing events versus filming, I still think both are important for my career.

This year and next year I’m going to try to compete at the bigger contests, and hopefully, work on more projects like this. In three years though I plan on transitioning back into full competition mode for the Olympics. Every year I’m thinking about what I can do differently and what can I bring to the industry. Sometimes it’s not just about the tricks, it’s more about where you’re riding.

I think the Philly project is a perfect example. It was a really long rail, which was tough to make it to the end. But to be the first snowboarder ever to do a rail on the Rocky steps? Well, that’s so cool looking back.