As the Sochi Olympics draw closer with the opening ceremony days away, little attention has been given to the athletic prowess of the Games' principal patron, autocratic Russian leader Vladimir Putin. A far cry from the rotund and caviar-fattened frames of Yeltsin and Chernenko, the former KGB spook is a dedicated athlete and fierce competitor. “Judo teaches self-control, the ability to feel the moment, to see the opponent’s strengths and weaknesses, to strive for the best results," Putin said regarding his long-held obsession with the martial arts. "I am sure you will agree that these are essential abilities and skills for any politician.”

But Putin's manly obsession with physical rigor extends beyond the black belt. He spent two months learning how to ice skate and play hockey from famous hockey star Alexei Kasatonov, often starting his lessons after midnight. With an affinity for the great outdoors, Putin often takes to bare-chested fishing in the Republic of Tuva and tagging wild tigers with the Russian Geographical Society. But with the Olympics approaching, Putin has taken great interest and pride in his skiing, and Soviet ski champion Leonid Tyagachev praised Putin's technique as "very stable" and that he can rip down at "a very high speed."

We thought it appropriate to reach out to our own pool of athletes and forum users to see what they thought of of the athletic leader's prowess on the slopes:

"Russian President Vladimir Putin skiing in Sochi is quite boring. His lack of enjoyment, gaper gap, inside outside pole wacking to clear no snow on his boots, hip thrust pole pushing and uncomfortable poses takes away from his surprising smooth turns. For his status as a nation's leader I'd say he's a solid skier, but to improve he could tip those skis up and get them to bend for some power out of his turns. Maybe then he'd crack a smile and have some fun.

That's my take. I bet he could smoke Obama in a NASTAR race."

"Frankly, I am impressed. A lot of celebs and politicians go on ski vacations and they are barely beyond a snowplow. Granted it was a groomed green run. Good to see all that some of his dictator money went to lessons. Pure propaganda piece. I'm fairly certain that they wouldn't put him on terrain that would cause him to look even slightly unfavorable. You would have a lifetime membership to a rock busting class in Siberia with optional meals."

-Ski to Be, TGR forum member with 'License to kill gophers by the government of the United Nations.'

"Putin appears to be a total gaper. The biggest giveaway is his awesome Uvex helmet in which he wears the strap securely around the front of his chin. I can't say that is a very popular move amongst experienced or avid skiers. Surprisingly enough, his skiing looks like it might have been influenced by some formal instruction, but I wouldn't expect him to be winning any races. Glad to know he likes his aprés sessions, though."

"Putin reminds me of a Masters racer - he suits up like one in tight, fast looking gear and loves to make as many turns down the hill as possible. He should be a good skier, when I was in Krasnaya Polyana (Sochi) competing on the Freeride World Tour airspace would get shut down around us when he'd be training for his amateur ski career at his private resort. In fact, one day we couldn't compete because our emergency helicopter for the event couldn't fly due to this very reason. What a diva!" 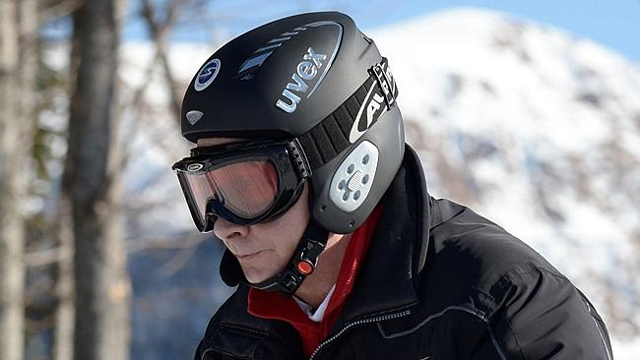 Putin demonstrating the steely resolve and focus of a trained athlete/quasi-dictator.

"Chin strap is too tight. And no current colors"

"Well, it didn't take more than a few seconds to figure out his steeze. Obvious Russian because of that Robocop look. I'm surprised he isn't in one of those helmets with the faceshield instead of a goggle, those things are cool, AND popular. I really like the poles with the slalom bash guards. Purely for style, just has that motorcycle vibe. It's badass mountain luxury - that's what he's going for. And you know what, the guys got a good turn too."

"He looks good enough to have fun. I'm sure it breaks up the monotony of plotting and hiring hitmen. What's Obama got for his machinations of empire? Basketball? Golf?"