What A Mt. Hood Vineyard Tells Us About The Future Of Snow

DEEP: The Story of Skiing And the Future of Snow, is a passion project started by two former ski bums who put their savings on the line so that their buddy, POWDER Magazine Features Editor Porter Fox, could spend a year and a half researching and writing a book about the history and culture of skiing and the unprecedented threat that man-made climate change poses to it. But while the statistics out of organizations like the Intergovernmental Panel on Climate Change may seem too overwhelming and abstract to understand, the anecdotes Porter collected from a huge swath of people across North America and Europe during his time researching the book reveal how climate change is already affecting individuals connected to snow. In Chapter 9: On The Road, Porter shows us how climate change has forced the skiing owners of an orchard at the base of Mt. Hood to switch from growing apples and pears to growing the grapes that Nappa Valley, 600 miles to the south in a warmer, dryer climate, is more famous for. He also visits Steven’s Pass a year after the tragic Tunnel Creek avalanche.

DEEP has nearly reached its final fundraising goal on Kickstarter, which will help them publish the book and get the word out. Pitch in here: http://kck.st/1eEPdoe

From DEEP, Chapter 9: On the Road 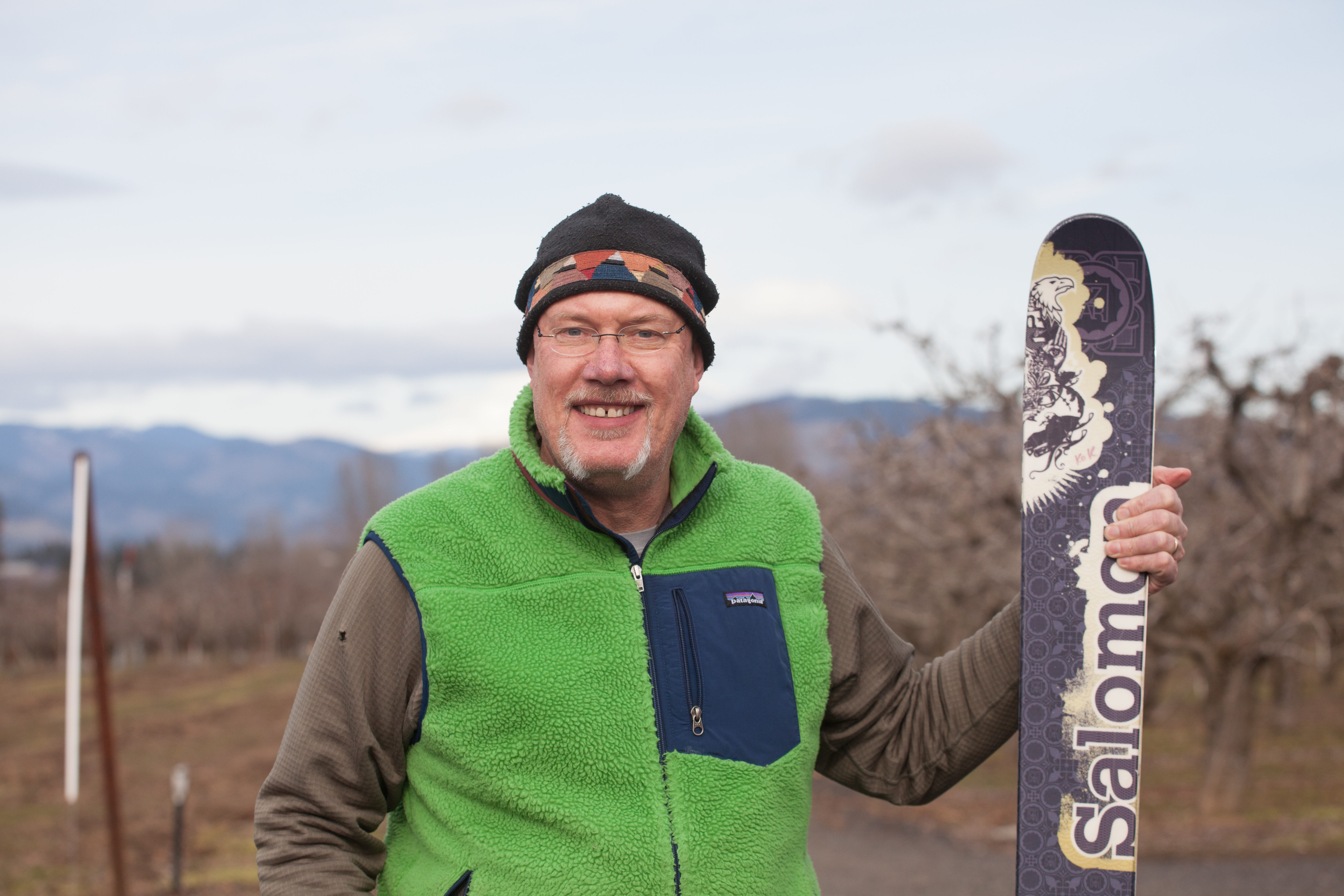 The next morning the NWS forecast read, “20 percent chance of snow before 10am. Mostly cloudy, with a high near 36F.” Outside, it was cold and gray with a kind of snow-hail coming down that I’d never seen before. I watched the climate change as I drove down Highway 35, gliding over Hood’s glacial moraines, rockslides and streams to Hood River Valley. There, skeletal apple and pear trees reached back from the road in perfect rows. Back in the day, fruit trees were about the only crop you could find on the valley floor. As the Northwest warmed over the last 30 years, though, the area started growing grapes that once made Napa Valley famous—600 miles to the south.

I pulled into one of the vineyards and spoke with farmer Steve Bickford. Bickford grew up in the house adjacent to the parking lot, and his son-in-law, John Stehlik, now runs the business. The state recently named Bickford Orchards a Century Farm, meaning the Bickfords had been farming in the valley for more than 100 years. Stehlik showed us the farm’s bottling machine and casks of pinot gris and Riesling stacked up in the warehouse. In 2012 the farm put out 30,000 bottles of wine. 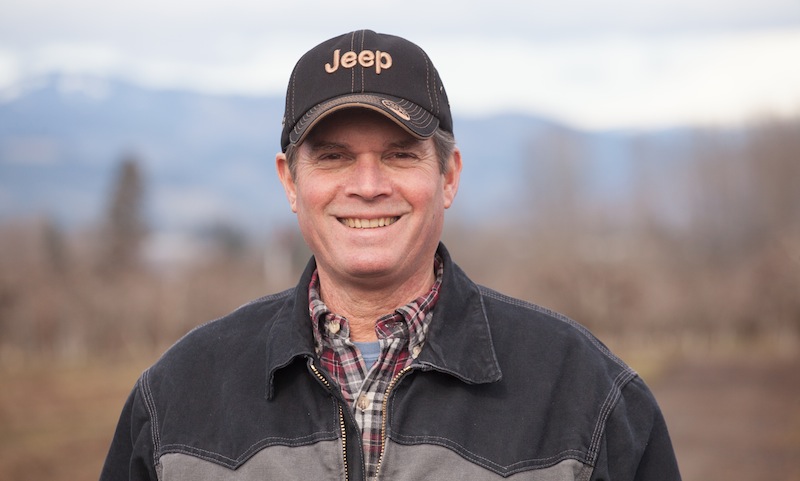 Like many other farmers in the region, the Bickfords transitioned into the wine business a decade ago after a shortage of water, inconsistent weather and market changes made some of the farm’s pear and apple orchards unviable. Wine grapes don’t need as consistent a water supply and thrive in the warm summers and shoulder seasons that the valley has seen over the last decade. The warmer it gets, the better the grapes grow, Stehlik said. And the warmer it gets everywhere else—like Napa Valley, Bickford added—the more demand there is for grapes in northern regions like Oregon and Washington. 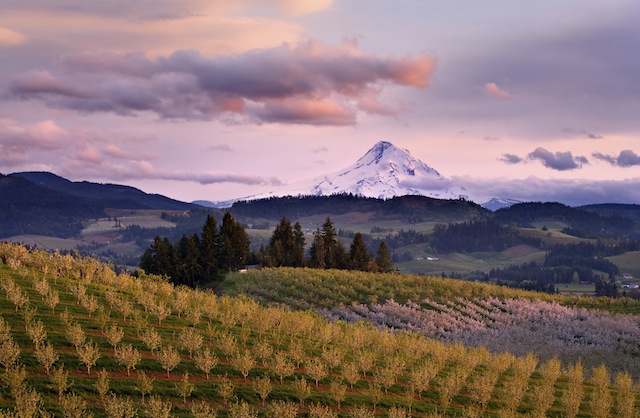 Sakura Ridge, one of a diminshing number of orchards in the shadow of Mt. Hood. Hood River Country Chamber of Commerce photo

Down the road, I passed the gourmet sandwich shops and kite-surfing stores of Hood River then followed Route 84 past The Dalles hydro- electric dam—where in 2006 Google built its first rural data center to take advantage of cheap, sustainable power. The move encouraged nearby Biglow Canyon Wind Farm to expand and spurred the creation of the nation’s first renewable-energy training program. I weaved through the monolithic spinning turbines up Highway 97 to the edge of the Columbia Plateau. The landscape there was flat all the way to the horizon, with only sagebrush growing in the rusty brown soil. A few dirt roads and dried-up arroyos crisscrossed the landscape—sectioned off by barbed wire fences and solitary telephone poles every 100 yards. In the distance, I could see the white heap of 12,280-foot Mount Adams.

Driving through such varied landscapes hour after hour—high alpine to river valley to volcanic plateau to conifer forest—it hit me that there is a reason why the desert is a desert and farmland is farmland. And that it hasn’t always been that way. Fifteen million years ago massive basaltic lava flows and the greatest floods in geological history shaped eastern Washington. The resulting contours of the mountains and prairies, in turn, now determine where rain falls and where it flows. It’s not luck or evil spirits or divine intervention that makes a landscape fertile, barren, snowy or flooded. It’s the evolution of the Earth itself.

I followed Highway 97 to Yakima and Ellensburg, then cut through the Wenatchee National Forest to Blewett Pass—on the old Yellowstone Trail—on the way to Leavenworth and Stevens Pass. The entire Northwest got hammered early in the 2012–2013 winter, with 3 to 5 feet of snow falling during Thanksgiving week, then 10 feet in December. January and the first half of February were largely dry, except for a few storms, then the snow started again and didn’t stop until April. 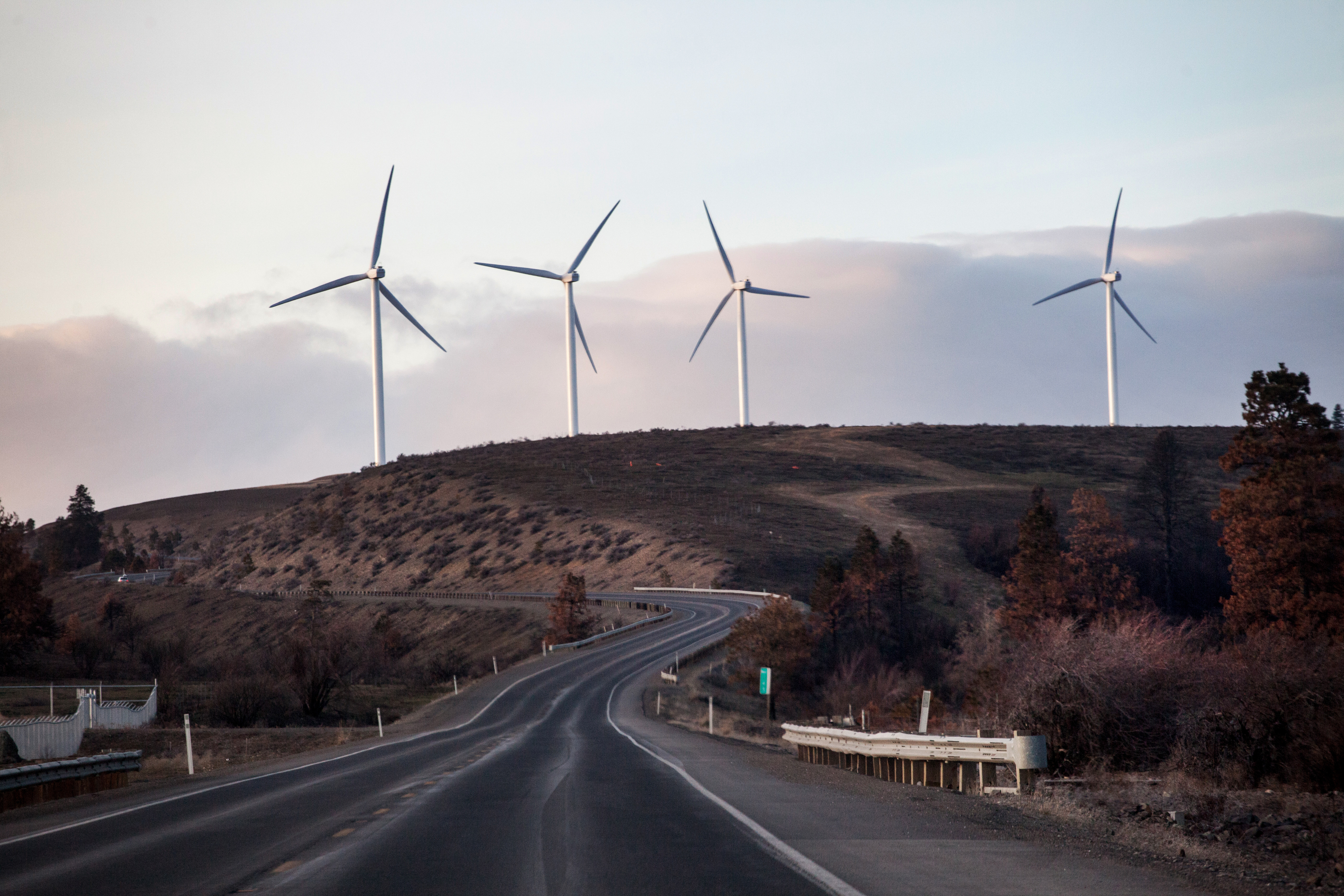 Hope on the road to Steven's Pass.

It was another great season for Stevens—which logged more than 500 inches of snow—considering that much of the rest of the country had spotty conditions once again. The Sierra got deep early snow, then hardly anything in January and February. Colorado missed all of the early storms, and many resorts were half open for the Christmas holiday. On January 22 Aspen had a 22-inch base, but the snow picked up soon after that and a flush February and March pushed snow depths closer to average. The big winners were the Pacific Northwest, Northern Rockies and, surprisingly, the East Coast, which saw good snow almost all season long.

Apart from the hundreds of millions of dollars that the oil industry invests in anti-global-warming press, one of the reasons people have such a hard time believing in climate change is that it doesn’t happen uniformly. Skeptics often claim that the planet hasn’t warmed since 1998. That year happened to be exceptionally warm, and nine of the warmest years in recorded history have occurred since then. Global warming comes in step changes over a long period of time. So a region can see terrific back-to-back winters while, overall, warming accelerates and total snowpack declines. Another anomaly is that warmer air holds more moisture, so while there will be fewer winter storms in the future, the ones that hit the U.S. will bring more snow. Case in point: the number of extreme snowstorms in the U.S. has doubled since 1963, but total snowpack is down.

When I woke up the next day, the sky was so blue it looked like one of the Bavarian murals in Leavenworth. The canyon was still dark, though, as I worked my way up to Stevens Pass. The previous fall, Mark Moore explained a phenomenon that makes low passes like Stevens skiable. Cold, high-pressure air from eastern Washington flows west through the passes when low-pressure storm fronts track east—freezing Cascadian summits and allowing precipitation to fall as snow instead of rain. “You really have to be aware of what the vertical profile of the atmosphere is in the mountains here,” he said. “Stevens and Snoqualmie would not be the areas they are except for the easterly flow. They would get a lot more rain, especially should we slowly warm up.” 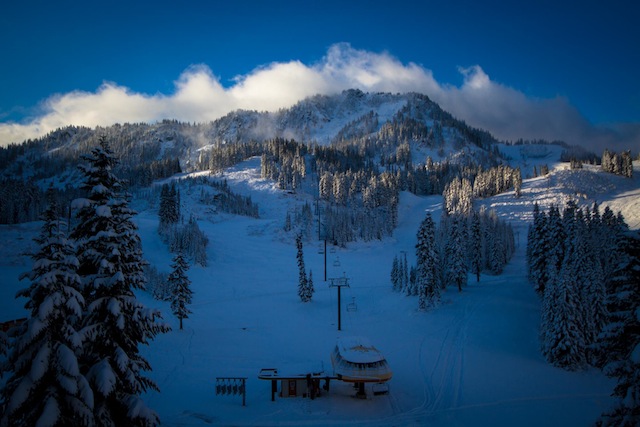 Stevens looked stacked with powder when I arrived to ski with Tiffany Abraham. She met me at the fire pit outside the base lodge where Jack, Rudolph, Castillo and the Tunnel Creek crew gathered almost exactly a year before. I wasn’t in town to talk about the accident this time, and Tiffany and I were both relieved to simply ski during her “riding hour.” She’d gotten a job as group-sales coordinator for the resort and was allowed to ski for an hour on the clock. She was still deep in the ups and downs of grieving, she said. The only thing that made her feel better on a bad day was to put on her skis and get up on the mountain.

We did just that on the SkyLine Express chairlift, where she pointed out Big Chief and Cowboy Mountain—then mentioned, almost as an afterthought, that Tunnel Creek was on the backside. It hadn’t snowed in weeks, but by the plumes of powder chasing Tiffany on our first run, you wouldn’t know it. The sun was hot on the next lift ride up and Tiffany said she couldn’t remember a time when there were so many sunny days on the pass. At the bottom of the next run we skied through dripping trees and slushy moguls, and Abraham said she had to go back to work.

We met up after the lifts closed at The Bull’s Tooth for an après drink. Tiffany told me about the memorial they were planning for Jack, Brenan and Rudolph a few days from then. There was going to be an “adult- themed” scavenger hunt, and family and friends were dressing up in costumes. At the top of the Tunnel Creek drainage, near a wooden ski carved with the men’s names, they planned to spread ashes and flowers.

The shock and heartache of the avalanche were clearly still with her, as was the kind of indomitable strength she seems to have exhibited most of her life. We ordered a round of shots of her favorite new drink, Ullr schnapps, and made a toast to the future. After tipping them back, I read the prayer printed on the side of the bottle:

Come snow! Come snow! From here to fro  Let the snow god be praised Let his gifts be shown

To order the book, head to DEEPthebook.com. To support the publishing mission of a few former ski bums this book represents, head to their Kickstarter page: http://kck.st/1eEPdoe