What To Do in Whistler According To Ian Mcintosh

Spending time in Whistler is pretty simple: you're going to have a good time.

If the world’s most famous ski resort, Whistler Blackcomb, hasn’t been on your bucket list, you’re probably doing the whole skiing thing wrong. The numbers are staggering: 8,171 acres, 200+ trails, 5,000+ vertical feet, 460+ inches of snowfall: you get the idea. The place is massive, but of course it takes a keen eye and some strong legs to figure out how to navigate it well and find the best stashes, both on and off the mountain.

We caught up with our friend, Whistler local and legendary TGR big mountain skier Ian Mcintosh, and tried to squeeze some local secrets out of him. Luckily, that true Canadian hospitality shone through and Mac gave us some advice for making the most of a few days in North America’s largest ski resort.

Mcintosh usually likes to spend his time climbing and skiing massive lines in B.C. and Alaska, but loves a good resort shred as much as the rest of us. Here’s his advice: 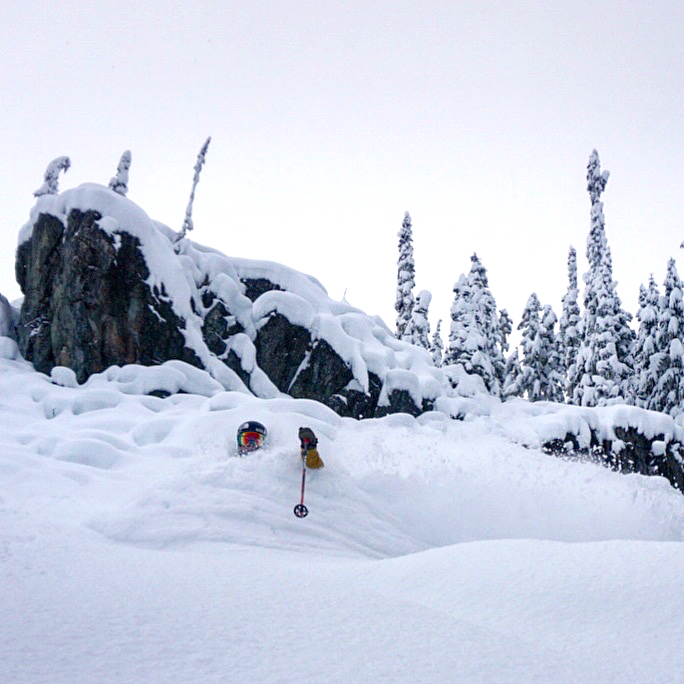 That rowdy terrain is pretty easy to find just about anywhere on the mountain. Mcintosh does his best submarine impression beneath a stack of virgin pillows. Ian Mcintosh photo.

TGR: Whistler is known for its abundance of snow, rowdy terrain, and big vert. What’s the best way to navigate the mountain?

Mcintosh: My biggest advice is getting out there early. Keep an eye on the light boards at the base, which indicate openings, and find out what’s in store for the day. Once you’re moving around, keep yourself updated on what’s about to open and head there ahead of the crowds. It’s a system that’s worked for me for years and, while it’s a battle, I still manage to get first tracks almost every day.

Another key thing: people tend to get tired at well before noon, and head in for lunch. Then they get into a food coma from all the great food, and head down for the day. Pro tip, hold out for another hour or two and avoid the lodges until after.

TGR: With all that snow, tell us a little about the snowpack, what can we expect?

Mcintosh: The town of Whistler is both relatively low elevation and really close to the ocean, so that brings some interesting weather patterns. Those patterns sometimes make it hard to predict what will happen with any given storm, but don’t get discouraged if it’s raining, and remember that the mountain has over 5,000 feet of vert. So, if there’s rain in the village, it can still be super epic up top. 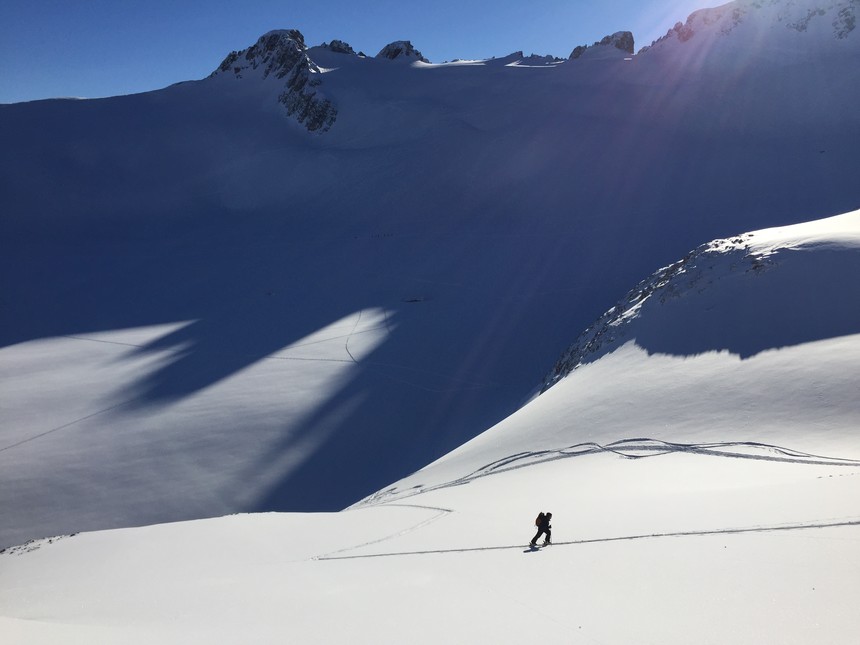 Mcintosh is no stranger to big terrain, and here he searches for fresh. Ian Mcintosh photo.

Mcintosh: Oh man, what a question! The answer is super weather dependent, the place is so big that there is something for every kind of day! If it’s really soft and the snowpack is touchy, I’ll head to Whistler mountain and bang out laps in the trees. On the other hand, if its bluebird and the snow’s good up high, I’ll usually warm up on Whistler side before heading to Blackcomb to shred laps in the alpine. Thanks to the specifics of the terrain, Blackcomb’s patrol is typically faster in getting their lines open.

TGR: Of course, you spend a lot of time in the backcountry. What are some of your favorite access possibilities?

Mcintosh: Yeah, that’s definitely my thing! I really do try to finish every day by going for a walk! Of course, there are a few things that should be said along the lines of: know before you go, educate yourself, and be sure to have and know how to use proper gear. That aside, getting out of bounds is largely dependent on the Upper T-Bar on Blackcomb opening. When that’s running, you can get out on the glacier and out the gates into some absolutely wild terrain. Check it out. 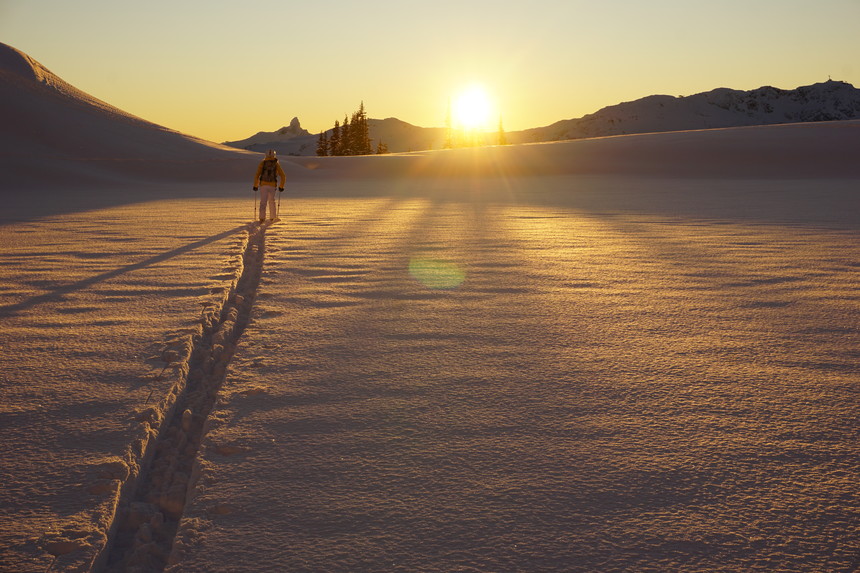 Evening walks are good for the soul. Bring your knowledge and proper gear, and go for a walk on the wild side in Whistler. Ian Mcintosh photo.

TGR: Whistler is known for its world-class après scene. From a local, what are some recommendations on that front?

Mcintosh: If you are looking for a party, there’s nothing like the Longhorn Saloon right at the base of Whistler. It’s got everything from food, Caesars, DJ’s, and loads of international visitors. For something slightly quieter, I usually head to the Handle Bar or Merlin’s for a more local vibe to hang out with friends. If you’re up for it, the town has a dozen or so late-night spots, so go explore! I don’t really go underground clubbing anymore, but there is certainly always something going on well into the morning hours.

Instead of stressing out finding something to do on any given night, the best thing is to find a Pique Newsmagazine, look at the calendar inside, and follow that. 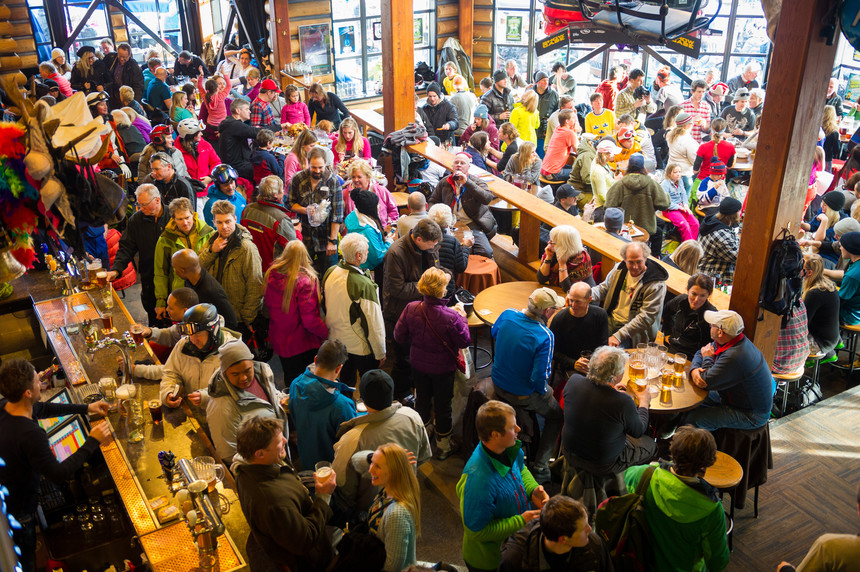 Home to one of the best après scenes in town, Merlin's is the place to be to hang with the locals. Tourism Whistler/Mike Crane photo.

TGR: So after an epic night on the town, what’s the best spot to refuel before heading back to the mountain?

Mcintosh: Breakfast is certainly important. I like to head to heart of the village and grab something at Wild Wood. It’s a great hangover spot, with 15 different kinds of eggs benedict. If it’s a pow day and you’re out for something quick, I’m a fan of Mount Currie Coffee. It’s actually named after one of my favorite peaks to explore near Pemberton that has almost 8,000 feet of skiing. 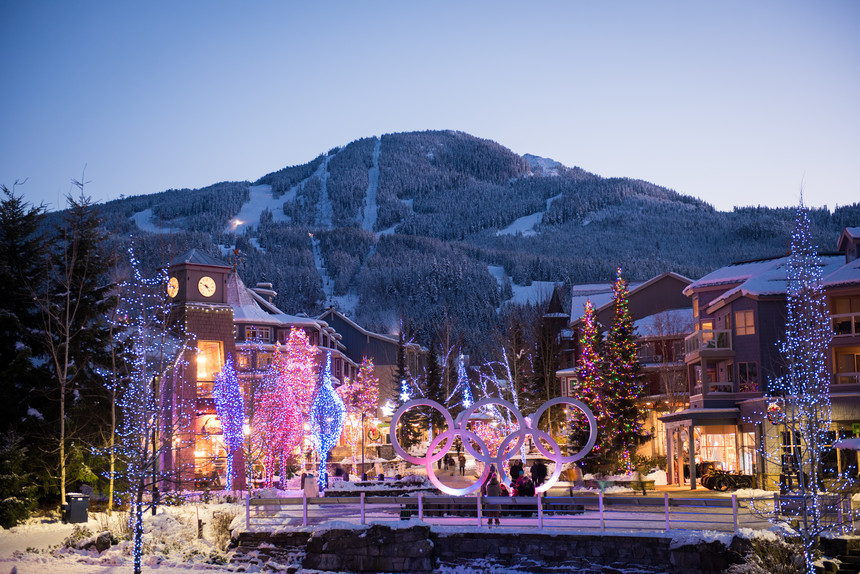 TGR: Any last words of wisdom?

Mcintosh: Oh man, there’s so much to say about this incredible place. For someone making a trek to get here, I would stress the importance of including some weekdays into your holiday. It will really give a feel for the place from a local perspective, and you’ll have more time and space to explore the endless mountain playground.

To learn more about Whistler and to book a trip, visit whistler.com.