Which Ski Town Crew Are You?

Whether you’re a veteran local scrambling to get first tram, or a weekend warrior in rental boots with a mean gaper gap…you’ve seen them. A large group of dirtbag skiers and snowboarders, either rocking an unfamiliar patch or sticker, shouting to each other in an unheard of vernacular, and causing a ruckus in the lift line. These more formalized shred posses usually sport a strange nickname, an unusual hashtag, or even an affinity for shredded cheese, but all are there, very much alive, and very, very proud.

The likeness to the secret societies of yonder years is not unnoticed. Built on the shoulders of dirtbags past, from the JH Airforce to the Aspen Buckaroos, these ski town crews have neglected the necessary "swift, silent, deep" discretion the pre sidecountry days in favor of "Vimeo views, Instagram followers, and Facebook shares."

RELATED: What Ski Town Should You Move To?

From edits on TGR's Stash to mini VICE series, these crews have gotten on our radar for their hard charging, hard partying ways. Here’s the beta on some of the most notable ski town crews around.

They leave shredded cheese like breadcrumbs for fellow shredders with names like Fromunda, Camembert, and Trufflestack. With #shredits coming out every few months showcasing their #PROtein members #shredding gnarly lines and backcountry booters, cheese grater literally in hand, The Muenster Factory prioritizes skiing for fun rather than for fans. After all, #itainteasybeingcheesy.

The Muenster Factory is often found dragging their skis up to their man made booters, umbrella waiting at the top, Pit Vipers in one hand and cheese grater in the other. If you're not up to skiing par, you can wait at the bottom of the hill for grown men throwing huge daffy's off of miniature moguls on skinny skis with rinds of cheese coming out of their pockets. Confusing most tourists and terrorizing most unassuming ladies at the bar, don't be surprised if you find parmesan grated into your shots and cheddar shreds stuck in your hair after a day hanging out with these guys.

California's resident Green Bandit Production Crew brings you regular snow and skate edits set to conventional Rap and Reggae while featuring techy rail tricks and general, albeit seemingly illegal and endlessly entertaining, shenanigans in their home town. From bong rips to handle pulls to hand rails, these guys play hard. If you want to see girls making out with each other, huge urban hits with questionable tranny, and lots of party scenes with half empty bottles of Tequila, these guys are for you.

Despite the partying, they mostly have the skill to pull off the edits and make them worth watching for hits other than from the bong. To quote YoBeat on the Gremlin Gamez of years past, "It seemed everywhere one looked there were a pair of skinny legs draped in weed-print leggings or a nice bust behind a revealing weed-printed tanktop. And we just took it all in with our weed-printed brains and reveled in it all."

Chances are you’ve seen these guys; probably twenty deep, charging faster than you do, and waiting for no one. Mad Trees skis hard. From “sendy grungy idiots in college” to sendy grungy idiots in the service industry, these guys put out almost as many edits as they do plates from the kitchens where they work…at least in the Tetons. Started by UVM students Anne Clearly and Spencer Lee, these Green Mountain State Transplants are cutting their teeth on bigger terrain.

With a nearly thirty deep posse that ranges from Vermont, to Jackson, and even Bozeman and Washington, Mad Trees is “a full throttle media wolf pack living for the fun of it.” Easily identifiable by Mad Trees stickers, duck taped outerwear, and super bright buffs, these guys have made a name for themselves outside the East Coast. From hometown sponsors and skiers like Skida Headwear, to big name brands like FlyLow, Mad Trees is here to stay. 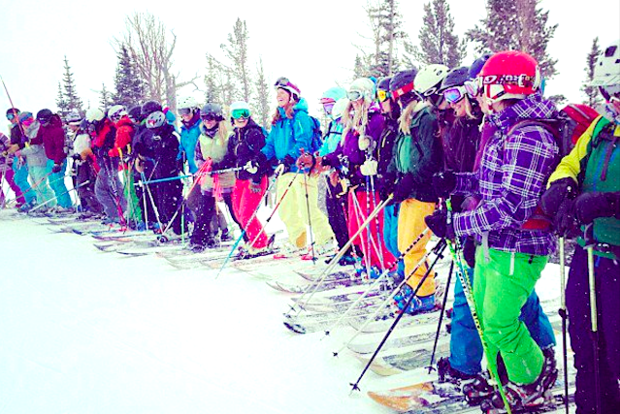 Rainbows and pole wacking are both encouraged and rewarded. Photo via Jackson Hole Babe Force Facebook.

If you’ve flipped open a ski mag in the past year, you’ve seen the shot heard round the world of Hadley Hammer sending Fat Bastard like fear doesn’t exist. If you’ve walked down Fifth Avenue in NYC and seen a blonde haired babe on a billboard climbing a rope like a fire is under her ass, then you know who these women are. This is the Babeforce.

Filling a void in the skiing community, the JH Babeforce started just a few years ago as a supportive and encouraging network of women who rip. With a two time Freeskiing World Tour champ, Crystal Wright, at the helm, the Babeforce has grown to include a number of accomplished skiers within the industry, ranging from TNF athletes Kaki Orr and Hadley Hammer to teenage up and comers like Elsa Smith.

Unlike the secrecy of their namesake, the JH Airforce, the Babeforce makes it a point to show their stripes, or tutus, on mass bump runs and huge airs rivaling those that made the Airforce our hometown heroes. With support from Pretty Faces and SheJumps, the Babeforce is amassing an undeniably strong influence within the industry, and a following of unicorn loving, pink spandex wearing, and ripping skier women.

The Yawgoons' claim to fame is undoubtedly their access to the most extreme terrain in the nation. Their home turf of Rhode Island's Yawgoo Valley boasts 310 feet of vert, and five of some of the best snowboarders out there. These guys really know how to make something out of nothing...if nothing is the only hill in your home state that can barely pass as a mountain. With over 17k followers on Instagram and over 40 edits posted to Vimeo page, the Yawgoons have amassed a following typical to a much larger, more established home mountain than Yawgoo Valley.

Chainsaws in hand, rope tows at the ready, and more rails, boxes, tables, and playground equipment then necessary, it's no wonder they boast over ten sponsors. You can expect these homegrown heroes to post edits nearly once a month hitting "features" you never even thought to hit with more style than 90% of Park Lane and Area 51. If you didn't already know who these guys were, now you do, and start taking notes.

By their own volition the Too Hard crew parties harder and rides harder than you do. Their gnarly urban segs are interspersed with bong rips, shotguns, and a big f*** you to everyone who doesn't respect what they're doing. Dubbed "The Most Badass Women in Snowboarding" we'd be hard pressed to find ladies who are more deserving of their in your face confidence and attitude. With 2014 Transworld Rookie of the Year, Danyalle Patterson at the forefront, the Too Hard Crew leads by example.

What started as an editing hobby has led to numerous films over the past couple of years highlighting both their real talent and raw antics.Cutting their teeth on highschool hand rails, blunts and forties, these badass babes are destined for big things. As Too Hard rider Madison Blackley put's it for VICE, "we're definitely not the most famous snowboarders in the industry...but we're definitely the baddest girls in the game" With the skills to back it up and the parties to wrap it up, we'd be surprised if that wasn't a self fulfilling statement.

If you've ever scoped lines in Montana, chances are, the Bridger Brigade scoped them years ago, and made an insane edit for Bomb Snow TV about it. They hit the gnarliest lines in the deepest zones to get you the best of the internet. From huge sends like this one from Ben Goertz, to the standard laid out backs, these guys have a roster of impressive athletes under the Bridger Brigade umbrella.

You've probably seen them. Most likely rigging up their sleds on their Tacomas in BROzeman, double checking their Voke Tab stock, and triple checking the eight PBR racks that are necessary for a sled day in the BC. But, let's be honest, Cooke City is a short drive away, so we don't blame them. With Cold Smoke Awards under their belt, the Bridger Brigade has no doubt graduated from basic internet edits and moved on to bigger and better things-mainly their entire series called Bomb Snow TV.

As the brain child of none other than pro snowboarder Alex Yoder, filmmaker Wade Dunstan, Anders Berling and Aidan Mieners, WYPY has become a household name among snowboarders as "extreme dudes doing extreme things...backflips are mandatory, tomahawks are encouraged." In an internet sea of serious edits set to AWOL Nation, the WYPY edits are a welcome breath of fresh air, tumbles, and hard booting.

With a roster of local legends like Bryan Iguchi and Rob Kingwill bringing up snowboarding staples like Blake Paul and Cam Fitzpatrick, it's no surprise that this crew has a dedicated following that extends out of the bubble that is Teton County. You can find them after a day of sending in bounds hips and pillows at the local thai shop; changing out of their hard boots and into their joggers and vans. After finishing numerous thai teas they will then transfer to the next and nearest thai shop.

Shared hometowns and social media platforms have spawned an entire generation of homegrown, loud and proud, ski town crews intent on making their internet presence known. We know that with the next crop of kids comes the next crop of crews. Who did we miss? Too many to count. We want the beta on your squad.