Will Alta Ever Be Forced To Share With Snowboarders? 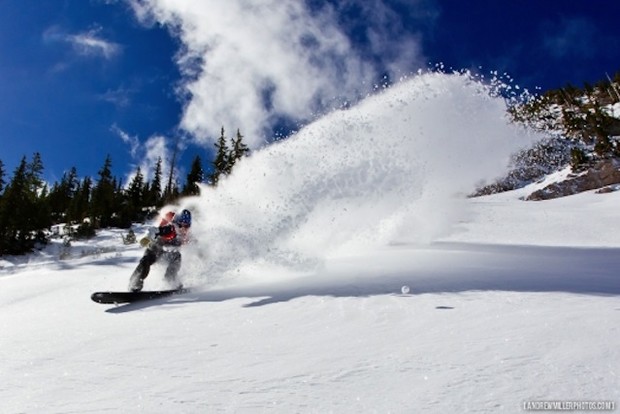 Forrest Shearer shreds Alta on a snowboard–a feat he was only allowed to do because it was a freak snowstorm in July when the resort was closed. Otherwise, he'd be banned from sliding sideways there. Andrew Miller photo.

Carve, cruise, huck, send–you can do whatever you want on the snow at Alta Ski Area, just make sure you’re doing it on skis. But one group of snowboarders is trying to overturn that long-standing rule in Little Cottonwood Canyon.

If you follow any of the snow-related news in the West (weather reports don’t count), you may have heard about the renewed legal battle surrounding Alta’s resort-wide ban on snowboarding. For those who may just be catching up with the legal shenanigans surrounding the Utah resort, here’s the short version of the original beef.

The Backstory: Wasatch Equality vs. Alta and the U.S. Forest Service

The legalese version reads: “The effect of Alta’s anti-snowboarder policy and snowboarding ban identifies a group of people (those who stand sideways on a single “snowboard” rather than standing forward on one or two “skis,” regardless of length, width, type of binding, or otherwise) and treats them as unequal, purposefully imposing inequality by, among other things, communicating to the public that snowboarders are not welcome by Alta or the USFS on the public land at issue.”

There are two points in the U.S. Forest Service's Ski Area Term Special Use Permit (a blank example of which is here) that might be beneficial to Wasatch Equality's arguments. The first states that the feds "reserve the right to use or permit others to use any part of the permitted area for any purpose," and the second states that the holder of the permit "agrees to insure that its programs and activities are open to the general public on an equal basis and without regard to any non-merit factor.”

The original case was dismissed in 2014. The ruling handed down cited three reasons: that there was insufficient evidence that the government (in the form of the USFS) was on board with Alta’s discrimination, that a property clause within the Constitution allows the USFS, as a “business,” to “discriminate” against snowboarders, and that Alta’s ban on snowboarders is a rational business decision. This all sat quiet for a while until this past summer, when Wasatch Equality took the case up to the Tenth Circuit of Appeals.

SO THIS IS WHERE IT GETS WEIRD 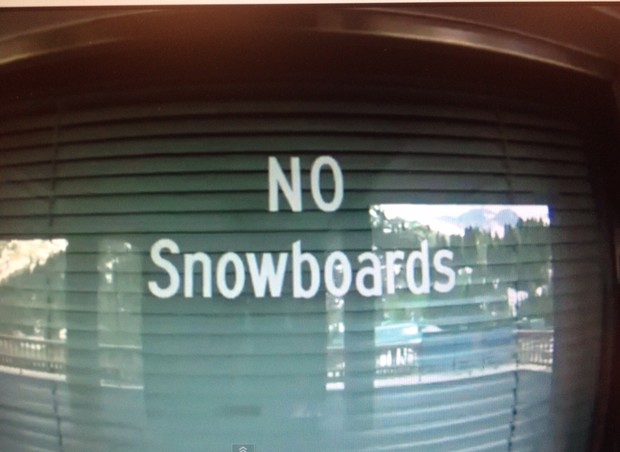 And that's because over the last (almost) two years, the arguments and commentary for and against Alta has been inconsistent. Some of it makes sense, and some of it just confounds the issue.

One judge in the case suggested that Alta's customer surveys, which indicated that most customers did not want snowboarders at the mountain, might warrant a business decision to ban snowboarders, while another judge wondered whether a snowboarder's blind spot over their shoulder might represent a safety hazard big enough to warrant outlawing of snowboarders. A third argued that the "discrimination" was against the equipment, and not the individuals riding them, which would invalidate Wasatch Equality's argument that Alta is discriminating against snowboarders as a group of people that are protected under the 14th Amendment.

And then there’s this video above, shot in the Alta parking lot in 2008, which shares the Alta clientele’s opinions about snowboarders. For Alta’s sake, we hope they don’t plan on using any customer testimony in their defense. Fighting back is the Alta Snowboarding Team, which identifies as a group of “equal-opportunity-fun-havers” who live and work in the Alta community and are passionate about gaining access to the resort while standing sideways.

The crux of the lawsuit and appeal is in the USFS’s permit in Section I, Part F: Area Access, which states that “Except for any restrictions as the holder and the authorized officer may agree to be necessary to protect the installation and operation of authorized structures and developments, the lands and waters covered by this permit shall remain open to the public for all lawful purposes.”

This means that unless Alta worked with their USFS liaison to specifically close off land use for certain groups (which is where the discrimination could come into the picture), in theory, anyone would be allowed on the land on which Alta sits. But, in keeping with Alta’s rules against snowboards (which are 100% fine for any other private company), they would not be permitted on the chairlifts.

WHAT DOES THIS MEAN FOR THE APPEAL? 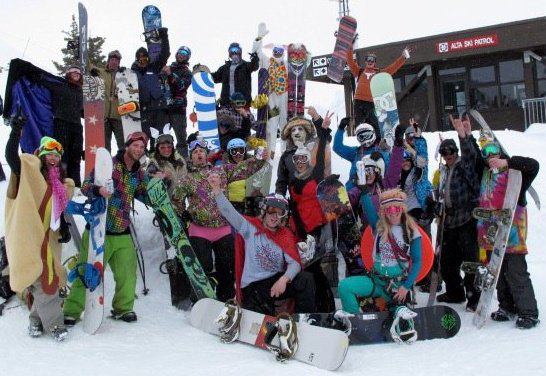 Wasatch Equality is pushing back on the three points outlined at the beginning of this article. They argue that there was sufficient evidence that the government (in the form of the USFS) was on board with Alta’s discrimination, that a property clause within the Constitution does not allow the USFS to “discriminate” against snowboarders, and that Alta’s ban on snowboards and snowboarders is not a rational business decision.

It seems as if USFS has more or less sided with Alta. According to Wasatch Equality lawyer Jon Schofield, Alta added a clause to their operating plan in the early 2000's (which is reviewed annually by the USFS) that essentially allows them the right to ban snowboards for any business decision that Alta might deem appropriate. The exact wording states that “Alta Ski Area reserves the right to exclude any type of skiing device that they deem creates an unnecessary risk to other skiers and/or the user of the device, or any device they deem causes undue damages to the quality of the snow, or is not consistent with their business management decisions.”

WATCH: Dylan Gamache is on his own plan on a snowboard

That last bit on “business management decisions” basically allows Alta to ban snowboards for any reason justified for business reasons (maybe that most guests don't want to share the hill?), not because snowboards or the people on them are an actual danger to their facilities or guests. As Schofield explained to us, Wasatch Equality believes that clause was added to institutionalize an anti-snowboarder attitude originating with one of Alta’s general managers from the 1980's, an attitude that has persisted into the current Alta culture.

Of course, if Wasatch Equality and their supporters raise enough hell and public interest in favor of shutting down Alta, the USFS could revoke Alta’s permit "for specific and compelling reasons in the public interest."

But that isn’t the goal. Instead, Wasatch Equality is pushing for an eventual revision of Alta’s operating permit that would no longer have the sneaky “business management” clause that currently prevents snowboarders from enjoying the hill.

SO WHAT WE'RE SAYING IS… 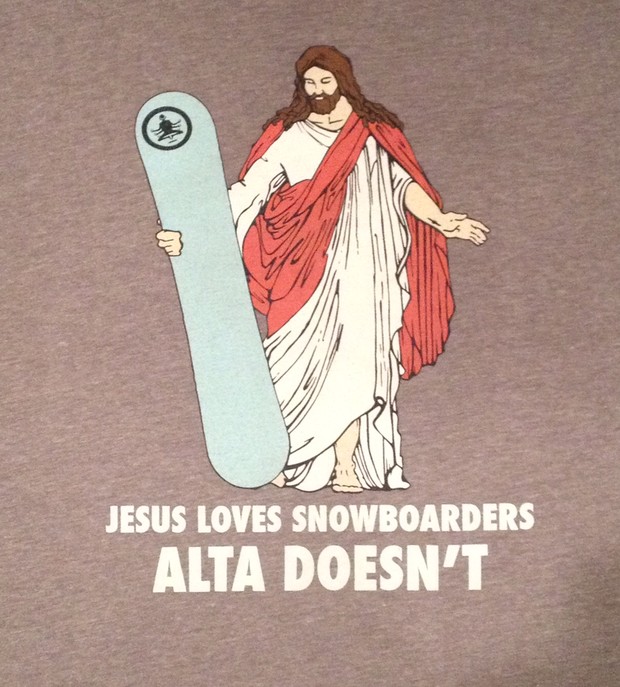 In addition to tongue-in-cheek merchandise like this shirt, Wasatch Equality has fought hard on the social media front, using the hashtag #AltaIsForEveryone to raise awareness about the issues they're fighting against. Wasatch Equality photo.

This is a huge can of worms, but contrary to the opinions of armchair lawyers on the internet, Wasatch Equality seems to have a pretty solid point, though that doesn’t make this an easy case to argue. The unique nature of the Alta-USFS relationship seems like it may have made the case easy to dismiss the first time, which is why the Wasatch Equality team has asked for oral arguments to be heard in order to clarify their argument that Alta’s ban is unconstitutional.

The appeal may come up early this spring–at this point, it’s hard to know where the judges stand in the process–but one thing is for certain: these snowboarders aren’t going down without a fight.