6 Tips On How To Ski And Snowboard In Japan 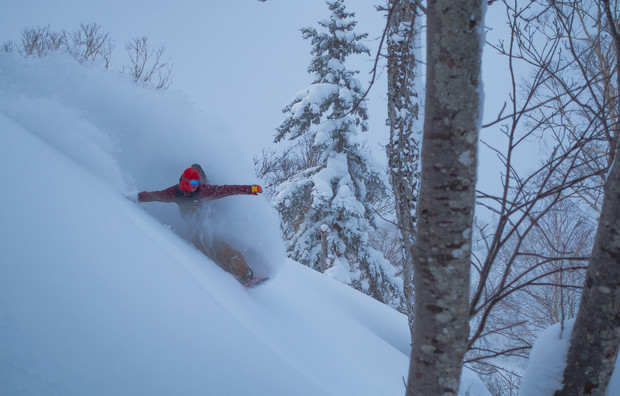 Last week we gave you five good reasons to visit Japan. Now that you’re (hopefully) sold on sending it on the trip of a lifetime this winter, it’s time to prepare mentally and physically for your journey to the land of the rising sun. Our photos and videos may make it seem like skiing in Japan is a breeze, but there’s much more than what meets the eye in order to create a successful ski trip to Japan. Here are six tips for you to look like a pro and make the most out of your Japan excursion…

Sneaky Pedro won’t always be there to break trail for you. Photo: Lucas Moore

Just because the mountains in Japan aren’t quite the size of those in Colorado or Utah doesn’t mean that you’ll be ready to crush bell-to-bell days like you normally would on those nice soft groomers. When you’re hot-lapping bottomless in-bounds pow with no lift lines, you can easily bag as much if not more vertical than you would during a day at Breckenridge. And if you choose to really get into the deep stuff and go touring, you’ll be breaking through feet of snow both uphill and downhill (don’t worry, it’s worth it). While our Japan media makes skiing in Japan look effortless, know that it takes an unexpected amount of leg work to move your body through chest deep powder. So do yourself a favor and get in shape before you hit the road, the last thing you want is to take days off in Japan… it will dump snow on your down days, that’s a fact.

With foot upon foot (upon foot) of snow guaranteed to fall during your stay in Japan, you must learn to properly ski in snow of that volume. The main difference between regular snow and Japan snow is the number of dimensions the snow itself has. In traditional skiing you have two axes to work with: the left / right axis (think side-to-side turns), and the uphill / downhill axis. Both of these axes are on the surface of the snow. When skiing nipple-deep powder in Japan, the third axis of snow-depth is introduced, meaning that your skiing must be modified to account for this change. To accommodate the third dimension of powder, a type of skiing called “porpoising” is introduced. In addition to moving side to side down the slope of the hill, it is highly effective to move vertically up and down with each turn, bringing yourself to the surface of the snow on every turn like a porpoise does in the water. If you’re having a hard time processing the concept, just come to Japan with us and we’ll teach you how… chances are it’ll become your new favorite way to ski or ride.

See where you might need some momentum? Photo: Lucas Moore

As mentioned, the mountains in Japan are not monstrous (although they are known to house monsters). Often times, the best and freshest snow is found on slopes with flat runouts where you are left to cruise back to the chairlift at slower speeds, wondering if what you just skied was real life or just a dream. Yes, it was real life, but in order to enjoy your runout time, HOLD YOUR SPEED. Use your poles, pump the rollers, and engrain the traverse tracks in your brain well enough so that you know when to point it and when there’s a tree coming up that you’ll need to duck under. Porpoising as you ski will help you keep your speed up on the more mellow pitches as well.

This one is pretty self explanatory: deep snow + no way of pushing yourself through it = no bueno. Park skiers – ditch those tiny twigs you guys call ski poles and invest in some quality aluminum sticks with big-ass powder baskets. Seriously, the bigger the better in Japan, there is that much snow. Snowboarders – it’s not a bad idea to keep a pair of collapsible poles in your packs. If you can’t make that happen, pester SASS Guide Andrew Burns on his snowboard-specific advice for tip #3 (see above), he’s been known to dust skiers out of Japan’s most treacherous traverses.

Look cold? That’s because it is. Photo: Lucas Moore

Trivia: with Japan’s best skiing sitting just miles from the Sea of Japan, how does the snow stay so light and fluffy in such a moist climate? Answer: it’s COLD AS F**K there. Take this into account, then remember that is snows six out of seven (if not more) days a week in Japan. Cold, cloudy, snowy… you’re going to want layers. Start with wool everything against your skin, then add in a lightweight puffy on top before finishing with technical bibs and a jacket over it all. Don’t forget an extra layer, extra gloves, and extra goggles in your pack. Ample amounts of buffs/neck protection will help for those snorkel-status turns, hell maybe even pack a snorkel while you’re at it. Bottom line: it’s cold and snowy in Japan, so be ready. On that note, keep an eye out for the SASS Essentials Japan edition gear recommendations… coming soon.

There’s nothing worse than wasting your first three days on a ski trip getting oriented and figuring out where the best terrain is. Add into the equation that hardly any Japanese skiers and snowboarders speak english, and you’re in a bit of a pinch. For the amount of time wasted trying to dial in where the goods are, you might as well spend the extra couple bucks to follow SASS’s allstar guide staff starting on minute 1 of your time on snow in Japan. We’ve been working for the last 4 years to memorize Japan’s steepest and deepest terrain with the best routes into and out of every line. On top of all this, we offer you the lowest price on lodging you can find… seriously, Japan is realizing that they are now the mecca of ski destinations, and have jacked hotel prices across the island of Hokkaido. Ski and ride the best snow, eat the best food, and rest assured at night that you’ll be the first to access the goods in the morning. SASS Japan: rally your crew, dial in your dates, and make it happen.