I've been asked to write a follow-up piece after winning the Park City trip report contest, and I figured I'd go into my process a little bit.

Trips. For those of us who don't live in an adrenaline junky's paradise, trips are required (for me at least) to get a satisfactory escape from everyday life. I find when I don't have a trip planned, my mood deteriorates and I start ruminating on what "my purpose" is and get that quarter life crisis feeling, and then feel even worse when I realize it's probably more accurately a one-third life crisis. It's a bad place.

When I finally do plan an escape from the daily grind (thanks everybody who voted!), a purpose does come to mind: I want to have a great time, and I want to document it well so I can share my experiences, and to a greater extent, preserve them so I can go back and experience them later. It'd be nice if I could convince myself that I should keep that as my goal all the time, but day jobs, traffic jams, and daily chores seem to be effective deterrents for me. When I'm not on a trip or seeing live music, my camera collects too much dust.

Because of the fleeting nature of these escapes from reality, I take particular care in capturing the experiences I've had. It's all worth it when I can look at a picture from years ago and it suddenly brings up a memory of the conversation I was having with my friend as I took the picture, or the burning sensation in my legs from climbing up the mountain I was on, or how good that sip of post-ride beer felt. I can't help but feel that those memories would be lost if it weren't for these pictures and videos.

For anybody who has the same compulsion, I've compiled a few tips here, starting with a big one:

Tip #1: The Best Camera is the One You Have With You. 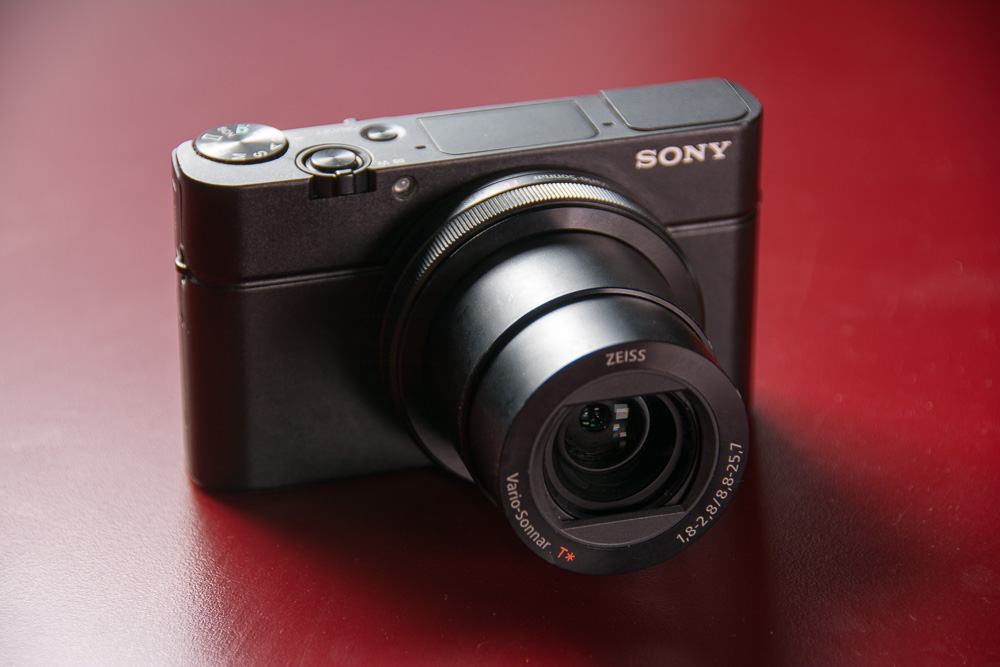 Even iPhones have come a long way, but toting around something like this tiny-yet-powerful Sony RX100 m3 have made a huge difference.

You might have heard that before, and it's a particularly true statement for those of us with adrenaline addictions. We tend to do cool looking things in cool locations. Sometimes we want to capture those moments, and most of the time, a bag full of professional camera gear isn't an option. Most of us aren't sponsored by Red Bull.

You can get by with a GoPro or Action Cam of course, but that constant viewpoint and lens distortion can get old fast when you're trying to put together a nice compilation video, and the photos, while okay, aren't that great. Previously, my attempts to get around this involved sacrificing a large part of whatever pack I had on to my comparatively giant DSLR and a few lenses.

RELATED: Got a helmet POV camera? You're doing it wrong...

For hikes and short bike rides, this worked, but was inconvenient. To get the camera to fit in my pack, I'd have to take the lens off every time. This meant any time I wanted to get a shot, I had to stop, take my backpack off, unzip it and pull the camera out, put the lens on it, power up the camera, and then begin framing my shots. When I was done the whole process needed to be reversed, and whoever I was hiking or riding with was bored or frustrated that they were watching me fumble with my camera instead of doing their thing.

When I got invited out for my last vacation out west, I knew something had to change. I realized the perceived hassle of fumbling with the camera every time I wanted a shot was actually stopping me from getting those shots. I'd stop myself by asking "Is it worth it?" and saying "no." too many times. Additionally, we were going to be doing the hardest ride I'd ever done to date: 4 segments of the Colorado Trail. I needed all that extra pack space for water and food and a spare tube or two. So I began researching alternatives.

iPhones have gotten consistently better over time. Here's a picture I took in Zion National Park with an iPhone 5: 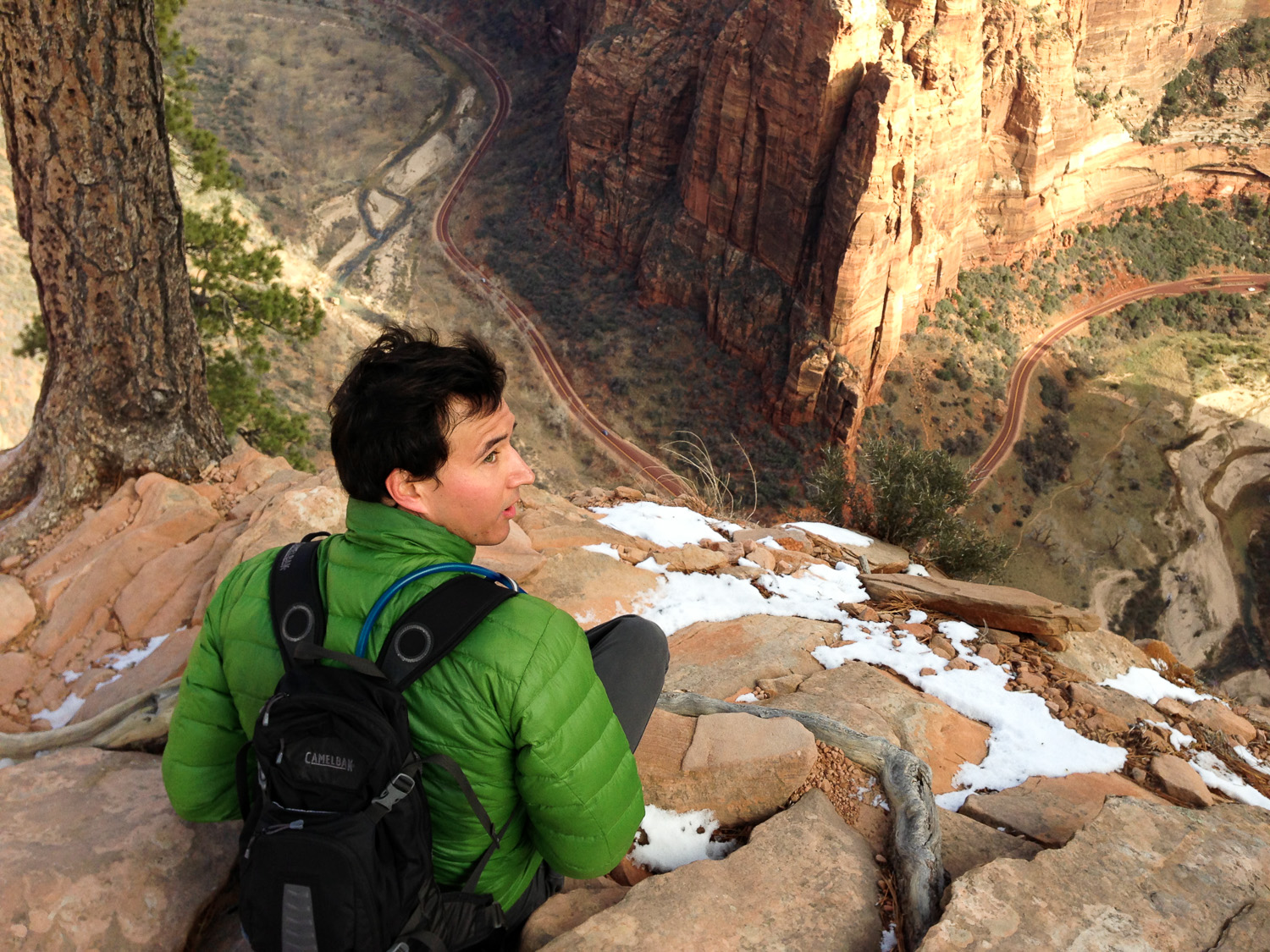 While cellphone cameras can be a fantastic addition to GoPro footage, I still felt limited by the lack of zoom, and the inability to shoot pictures in RAW format so I can tweak things after shooting. 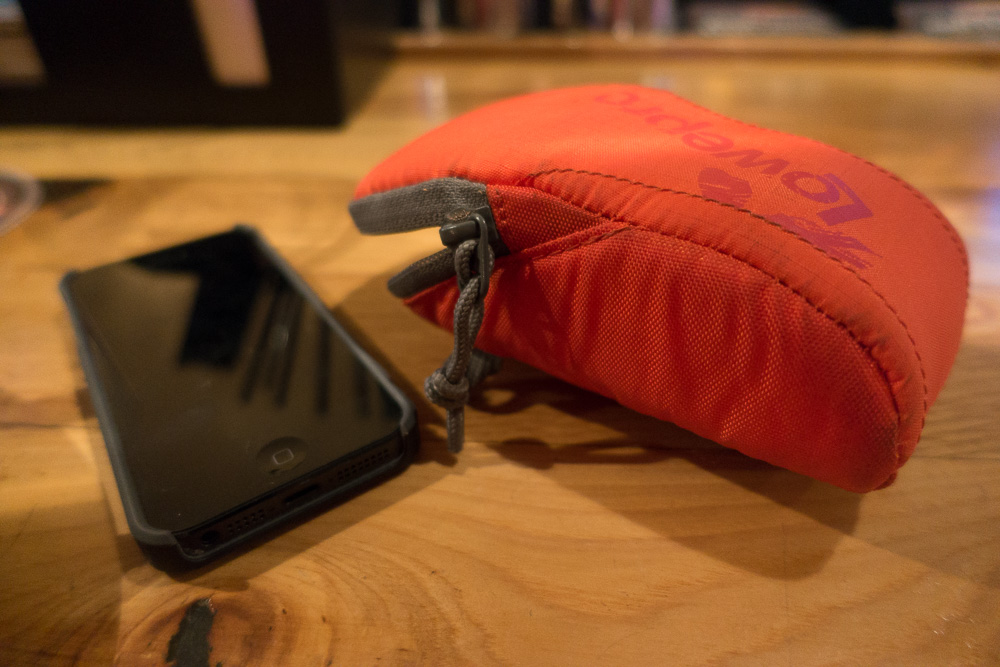 My little Lowepro case that held the camera, next to an iPhone 5 for size.

After way too much boring research, I ended up finding the Sony RX100 m3. The sample photos I was looking at blew me away and seemed comparable if not better than what I was able to take with my camera 5 times the size. It ticked all my boxes and a few I didn't even know about. It shoots in Raw format. It has a pop-up electronic viewfinder so I can bring the camera up to my eye and frame shots exactly like I would with my DSLR (great in bright sunlight). It takes unbelievably good 1080p video. It has a well thought out timelapse function that I ended up using extensively. And the lens quality is simply absurd and allowed for great low light performance. The RX100 and a little Lowepro case that could strap to the armstrap of my backpack were my solution. 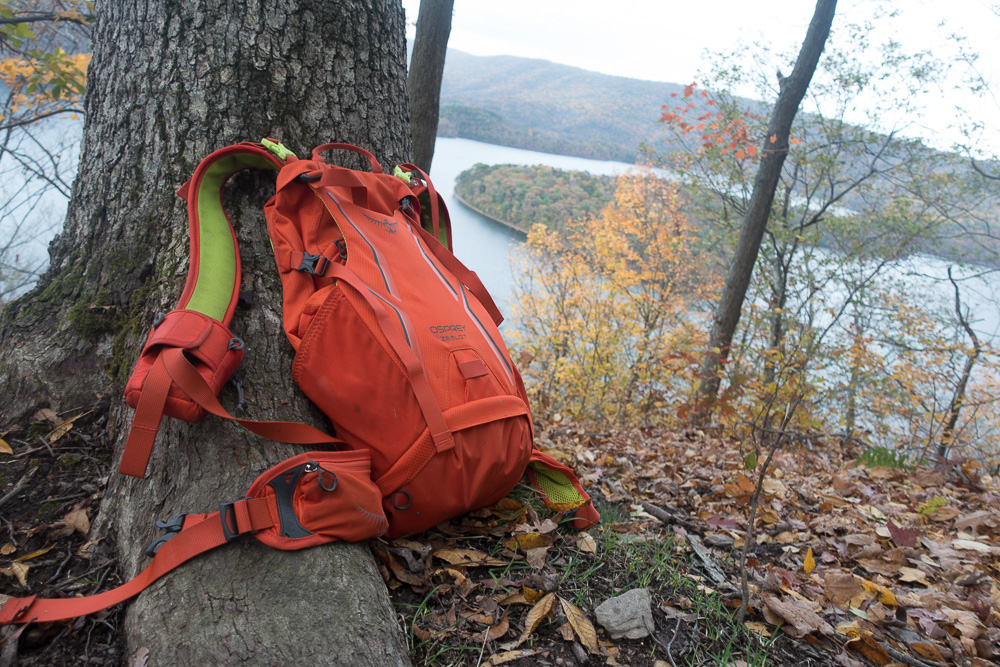 The case made it easy to strap the camera onto my pack's armstrap.

With this setup I was able to see something I wanted to capture, reach towards my shoulder, whip out the camera, and be getting shots within 10 seconds. It was awesome, and made documenting the trip easy and convenient.

Tip #2: Get more footage than you think you need 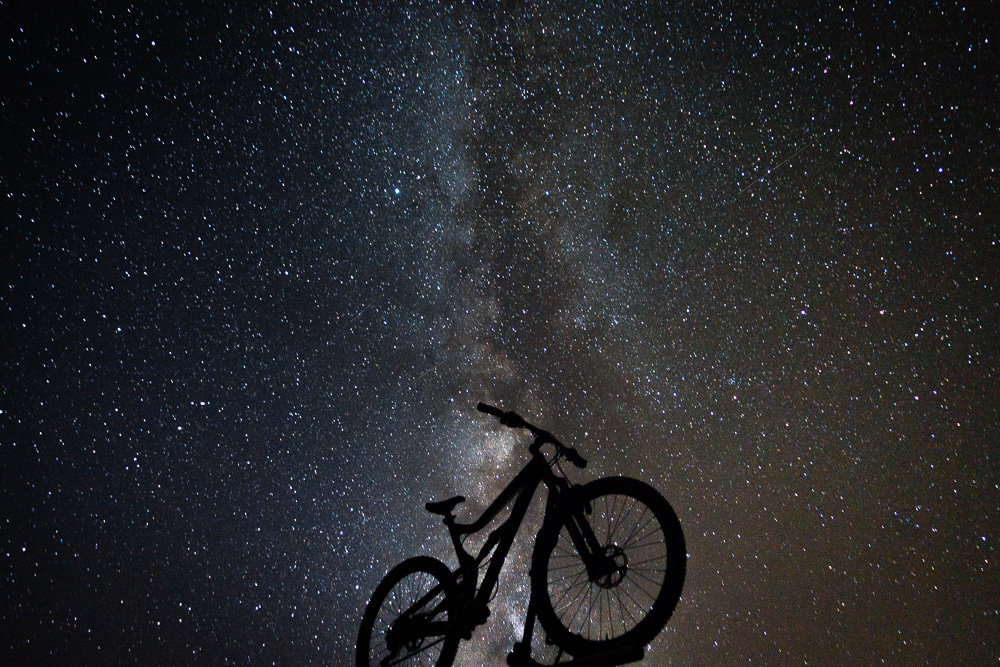 Making a good video will be much easier if you're dealing with an overload of decent footage.

If you're putting together a video edit, you need lots of footage to choose from. If you see a nice shot, take it. Spend a little extra time shooting, experimenting, and ultimately getting to know your camera better, because you'll be glad you did when you're putting an edit together.

A tripod would have been too clunky to bring along during the riding, so a majority of the shots were done handheld. While I tried to keep each shot as steady as I could, I was far from perfect. Several of my favorite shots ended up not being usable because I wasn't able to keep the camera steady enough. The camera had stabilization which was nice, but sometimes my shaky hands overwhelmed it.

Luckily, modern video editing software (Adobe Premiere in this case) has some incredible options for stabilization after the fact. Don't get too comfortable relying on it, but you can definitely bring back some really shaky stuff and make it work. You do lose a little sharpness when doing this though, as it's essentially blowing up the footage.

I had the song I used picked out way before I even went on vacation. I felt it would work really well with a bike video, and I was able to plan shots around portions of the song. Make sure you're okay sacrificing this song however, as after going through the editing process and hearing it about 10,000 times, you'll never want to hear it again.

TIP #5: Get familiar with filming timelapses 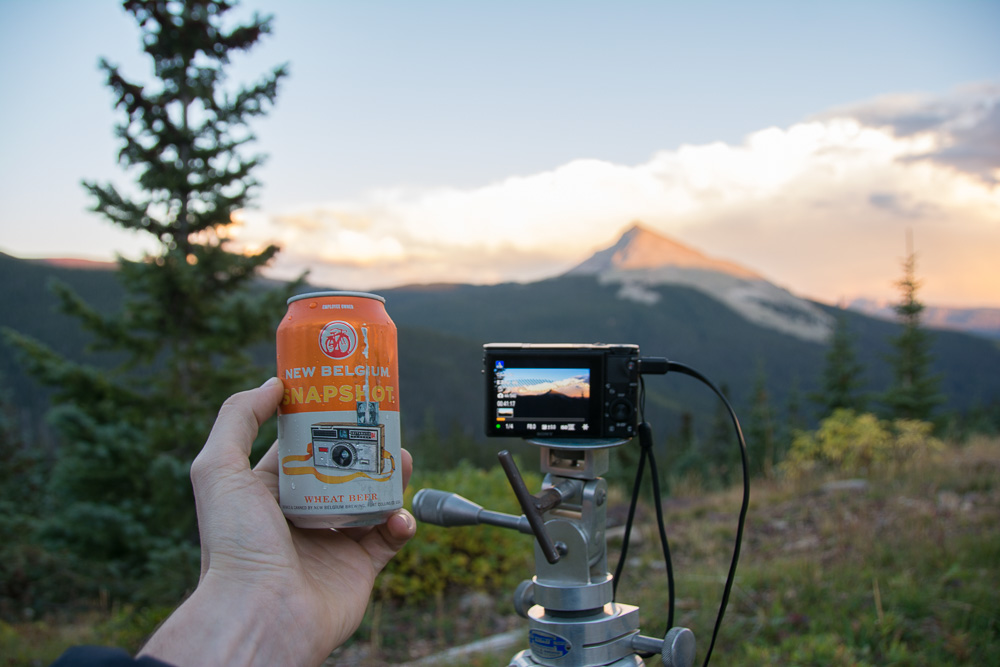 Timelapses are a great way to add a creative element to your videos without working too hard.

Let your camera work for you while you're asleep or drinking around a campfire. Once you've nailed down the process of setting the camera up, it only takes a few minutes of setup, and you can end up with great results. Just make sure to use an external battery to power the camera because waking up to a dead camera that barely recorded anything is no fun.

TIP #6: Change up your camera angles 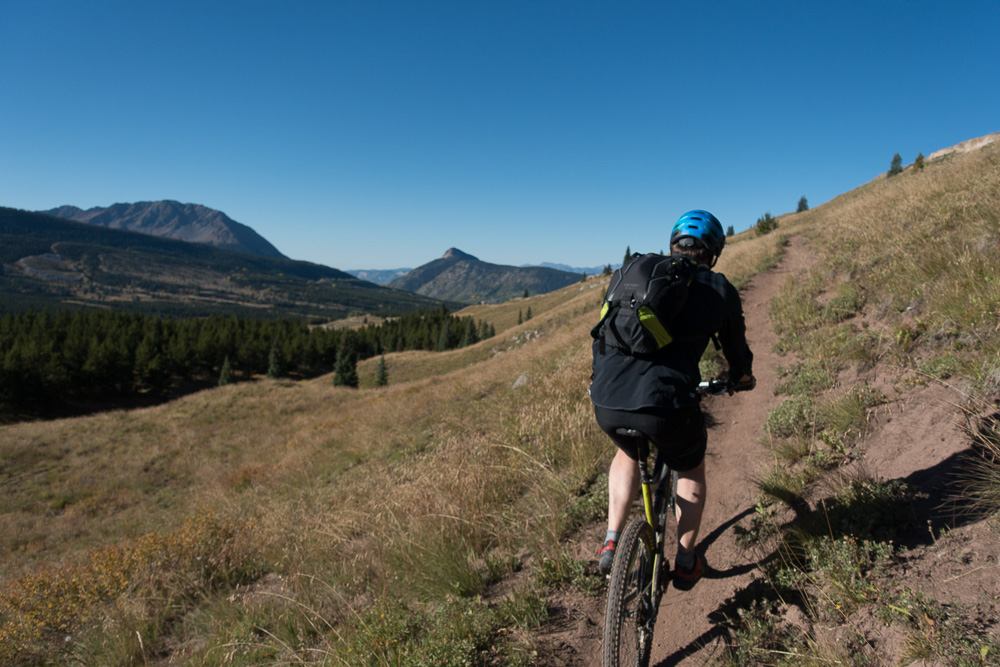 I regret using almost purely chest-cam footage of my riding. It's my favorite viewpoint as it gives you an idea of what the bike is doing below the rider, but it has a tendency to be shaky, and is boring if that's the only viewpoint you're showing. Get some new mounts and experiment, again you'll appreciate it in the editing room. 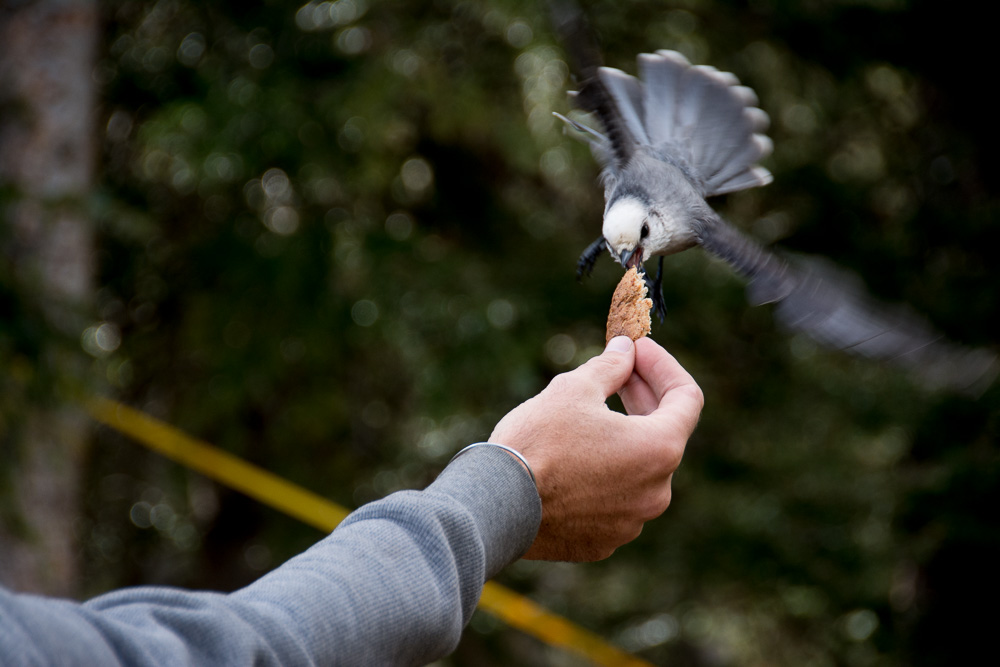 Capture the non-action moments, too.

Try and share what the experience of the entire trip was like. Film the weird stuff; The sunset from the car, the view out of the plane's window, the dogs having fun. It's nice to break up constant riding with a few oddball shots of the stuff in between your time on two wheels.

RELATED: 7 essential tips for living a year of adventure

After spending some time with the footage, I was able to share this experience with a ton of other people, and have a nice little clip to replay every now and then when stuck behind a computer screen, grinding away until my next trip.

I really look forward to sharing this next adventure in Park City with you, and hopefully this little rant about how I'll go about it inspires you to do the same on your next adventure. Thanks again for the opportunity!