A Day In The Life Of Freeride World Tour Snowboarders 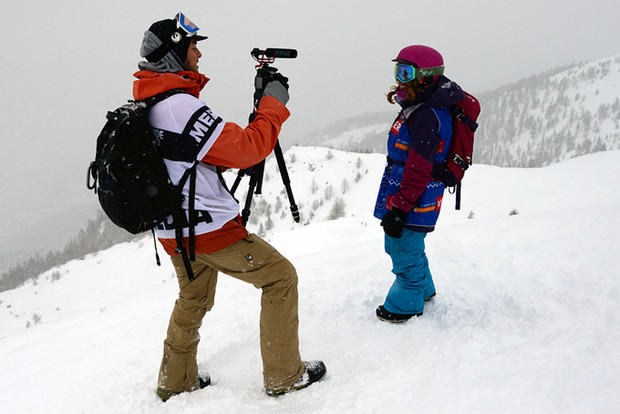 The life of a competitive snowboarder is a hectic one. For all the big lines, parties, and powder, there are long travel days and sore recovery days. We asked four Freeride World Tour snowboarders – Colin Boyd, Michelle Locke, Sammy Luebke, and Mona Seraji – to send us photos from one day this winter (not necessarily a competition day) and tell us what their lives really look like. 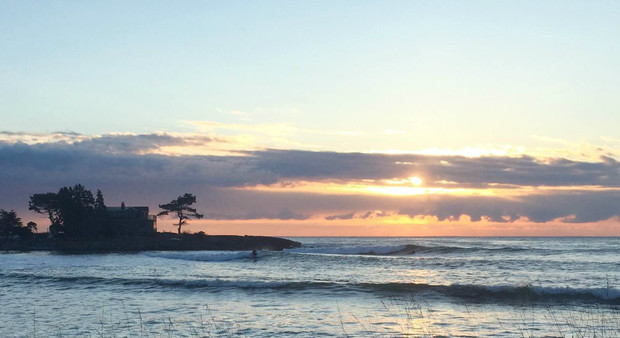 Since I've been home in Maine, the surf has been pumping. However, at a steadfast 40º, the water is not as tropical as it looks. 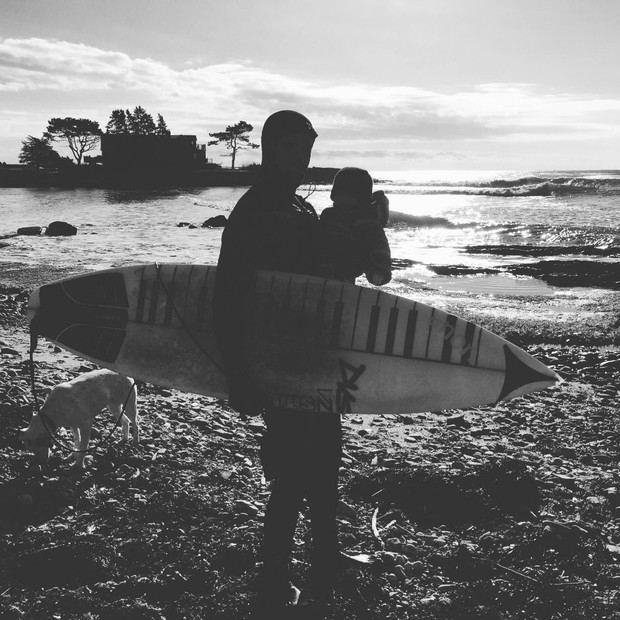 Living right down the road from this surf spot means my wife Sofi and son Alfonso can join in when the conditions suit. 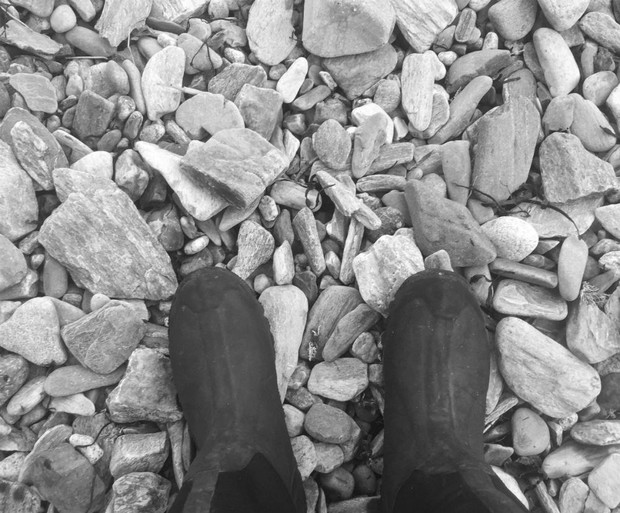 The East Coast is having a less than average winter right now, and this shot of my gum boots is about as close to snow as I've got since leaving Europe three weeks ago. I've only spent one day riding back east so far this year. 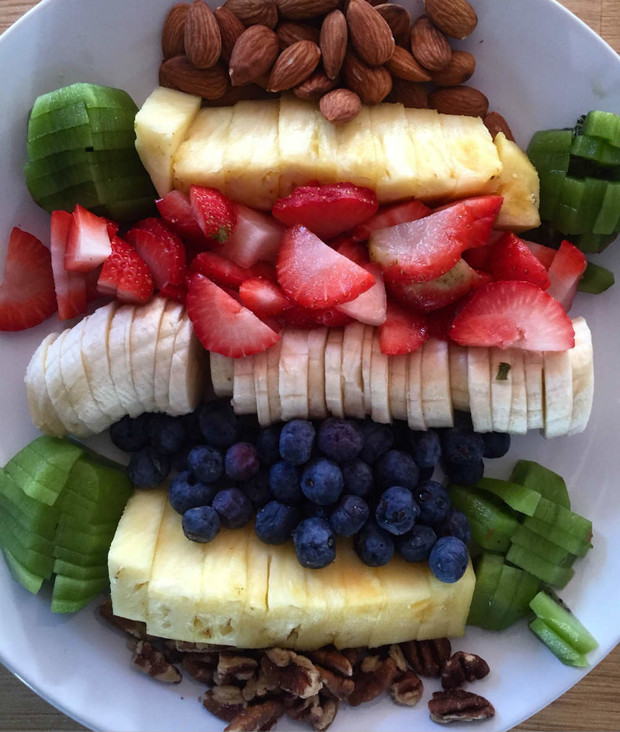 After munching bread, cheese and prosciutto for weeks on end, it's always a pleasure to get home and eat really well. With my wife as a vegetarian, we typically eat much healthier than I would on the road. 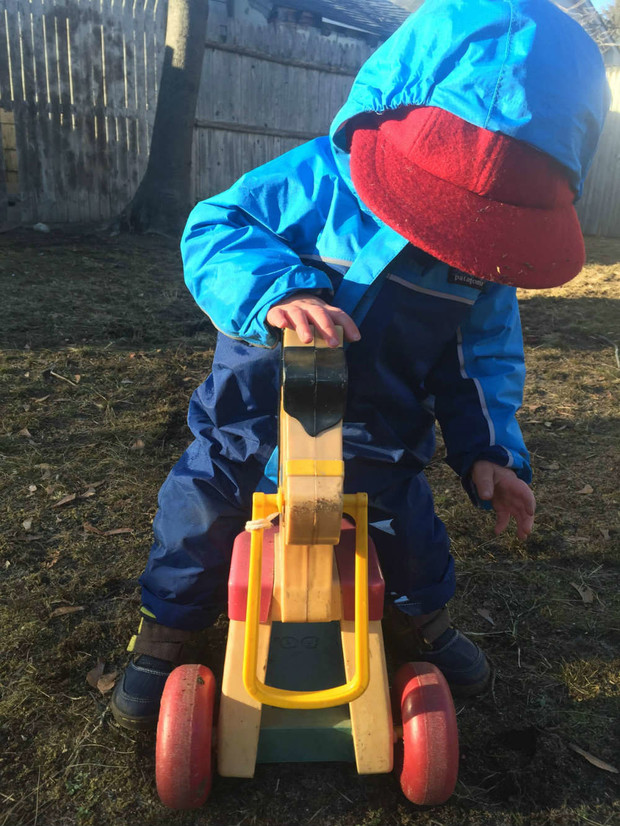 What I miss the most about being away are the moments shared with my one year-old son. I missed his birthday this year as I was in Chamonix, and it's getting harder and harder to leave as our bond grows stronger. 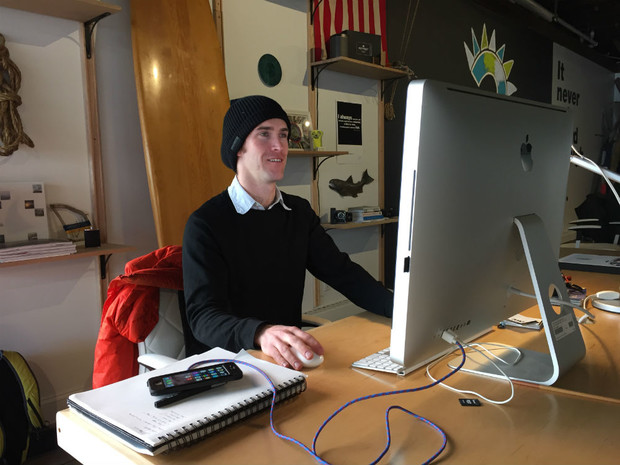 In the past two years I've spent the least amount of time on snow as I have in the past ten. I now live back east and spend most of my time consulting with the Creative Agency Kingspoke, and after many life changes spending time away on snow, is becoming harder and harder to manage - especially as the cost of tickets continues to increase.

While at home, I try and work hard, spend time with my family, and stay confident and strong about the next Freeride World Tour events. But I am fully aware that the less time I spend on snow, the less likely I am to remain at the top of my game. It's really one of the most difficult things to manage. 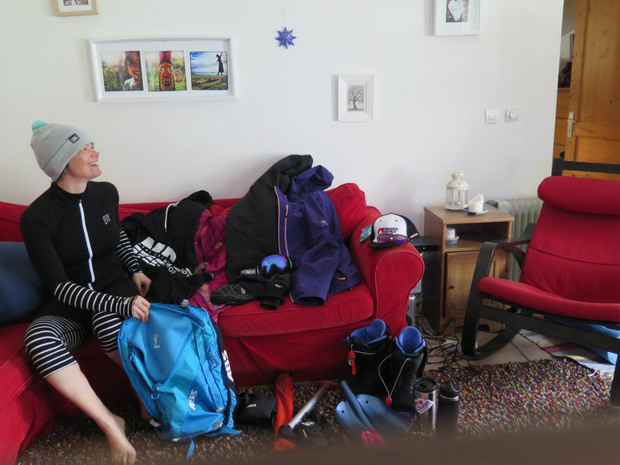 I drove back to Chamonix, where I've been staying, on Sunday from staying at my friend's chalet in Switzerland near a ski area called Rosswald, a tiny freeride resort near Brig, Switzerland aka "Little Canada." It only has two t-bars, but amazing steep trees and no rules, so you can shred wherever you want at your own risk. 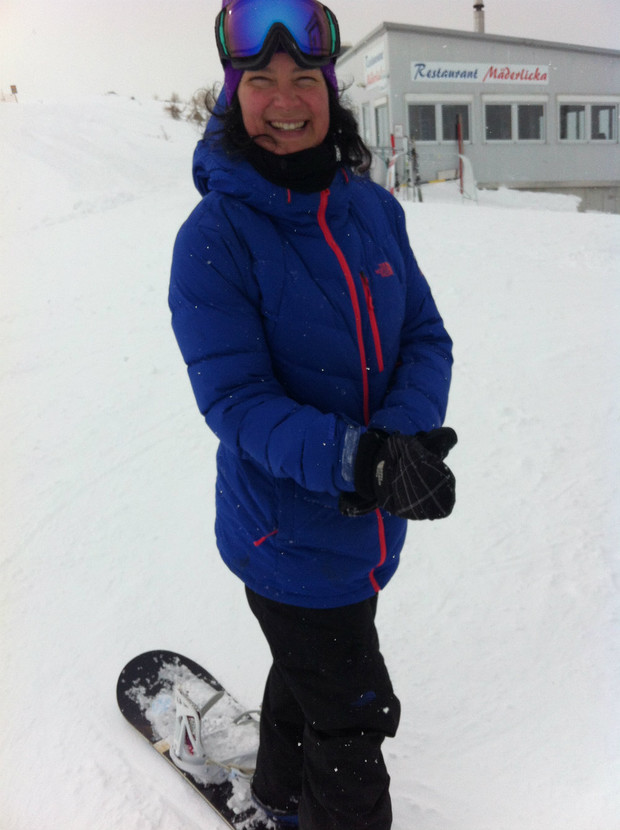 We had an amazing game fondue at the top of the resort the night before we shredded down by the light of the full moon. It's imperative to know locals when you're travelling to get in touch with the language and the lay of the land, avalanche danger, resorts, and to take full advantage of all the treats.

While visiting Brigerbad's hot pools, I was not informed I needed a towel in order to hit the sauna due to mandatory nudity. I'd be okay with that, but not wanting to splurge on an $8 towel rental, I regressed to the pools and steam. I guess I wasn't totally in the know, which happens here a lot – kind of like how Switzerland has different power outlets than the rest of EU, and how driving around massive traffic circles doesn't come like second nature, and you end up riding the wrong way around it, which puts you onto the train tracks. Ha! 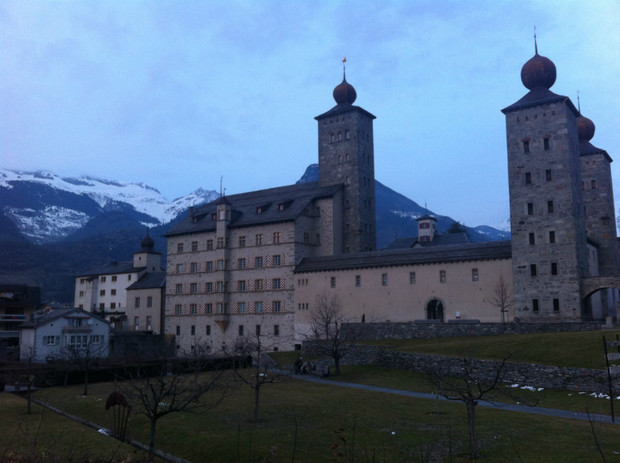 I've endured a few new areas of possible concern while driving from Andorra to Chamonix alone, and around Switzerland with summer tires on my rental car. Apparently that is the norm when you are in France – note to self.

Today we rode Grands Montets, one of my fave resorts in the world besides Lake Louise resort in my hometown of Banff, Alberta. Some people call me a "fair weather friend," but I still endure shredding a whiteout. It's a love-hate situation. 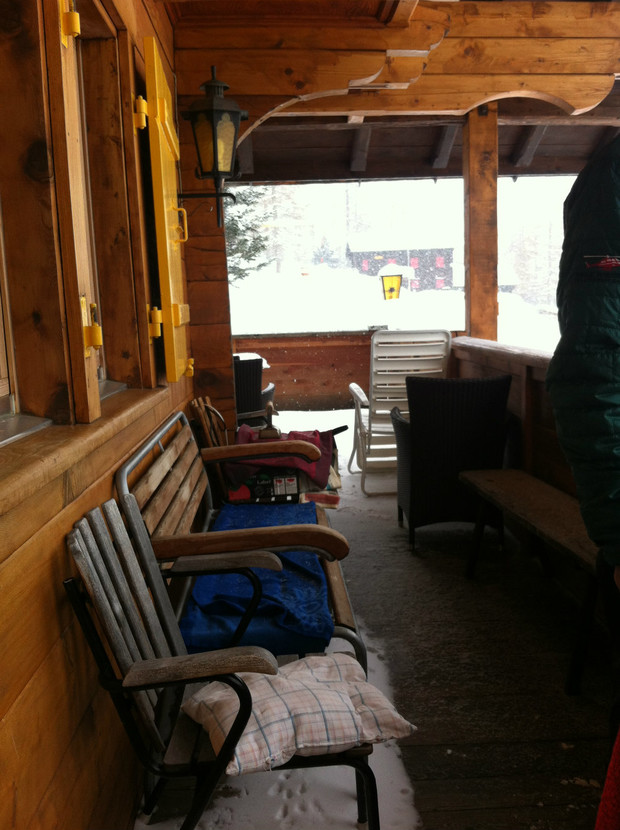 Luckily enough, I ride by braille to the best pow the Cham valley has to offer. If I didn't, I would've had so many more down days by now. It dumped about a meter of snow here last week, and I've never seen so many people get stuck in a foot of snow in one night in my life (Note the summer tire thing in France)!

I'm getting ready for my comp next week in Austria now. I get massaged every other day and do a lot of yoga and plyometrics. At the last stop in Cham, I roomed with two female skiers who are both awesome, Mali Noyes, who I also roomed with in Andorra, and Hazel Birnbaum. It's pretty different having two roomies in a hotel room when you don't usually have any, and answering questions like why I'm jumping (i.e. doing plyometrics) in the room. 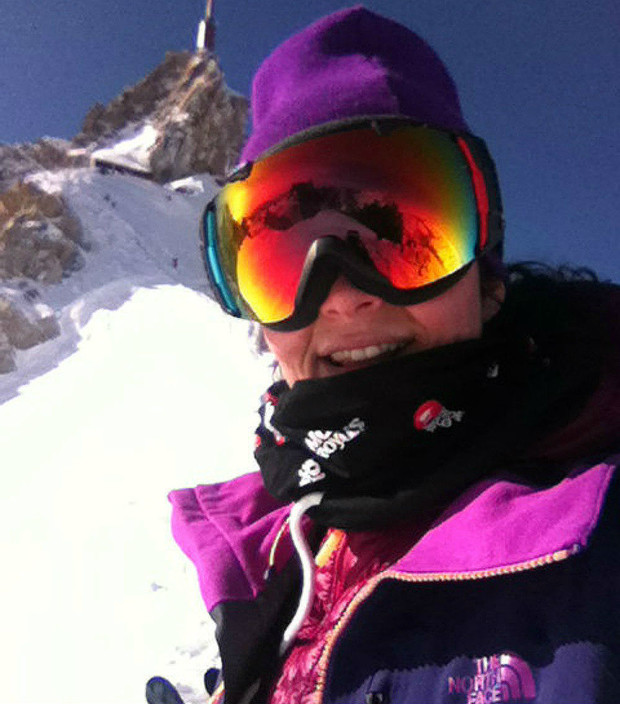 I've been shredding with my new airbag pack. It's mandatory to wear one on the FWT, and weighs a lot more than my normal The North Face Patrol pack. I've been practicing jumping off cliffs and getting used to the new weight so I can risk a bit more with confidence at the next stop. It's been a huge learning curve and I'm enjoying every bit of it.

I look forward to learning more of the languages of the other athletes and to help to push the evolution of our sport for many years to come. My main goal is to be on the podium on the next stop, and head off to AK with the best freeriders on the planet, which has always been a huge dream of mine. It's so awesome being in the environment I've fostered for almost 20 years now of freeriding and exchanging stories of adventures with everyone past, present, and future. 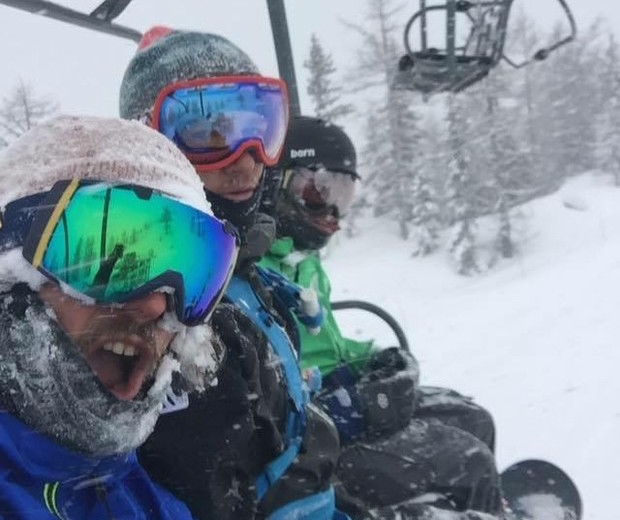 This was the day before the Freeride World Tour stop in Chamoix. We had traveled from Andorra, all the way to Chamonix, which took about 16 hours of total travel time, by rental van and trains, over a 10-day span.

During that 10-day period, this was the first day we rode pow the entire time. Before then, it had just been warm, and you could've sworn it was spring. It was inspection day, but it was so sunny and deep out, we only inspected for about 5-10 minutes. 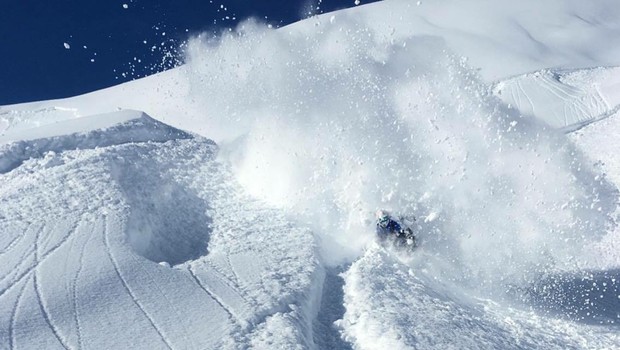 That powder day with my friends I feel was the key to me riding my best and winning the stop in Chamonix. I had a clear mind and I was focused, and that was because the powder put me that way. It was a refresher for me all in all, and one of the best pow days I've had all season.

Iranian snowboarder Mona Seraji could only get a one-month visa, allowing her to compete in January 2016 and requiring her to return to Tehran in February. She is the first person from the Middle East to compete in a Freeride World Qualifier event. Photographer Vanessa Beucher documented Seraji's experience during Verbier Freeride Week. This section, unlike the previous three, is not in the first person. 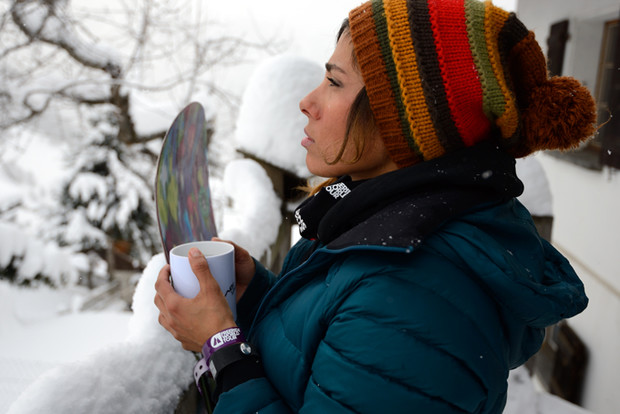 Before the first day of Verbier Freeride, Seraji takes some time for herself in town. 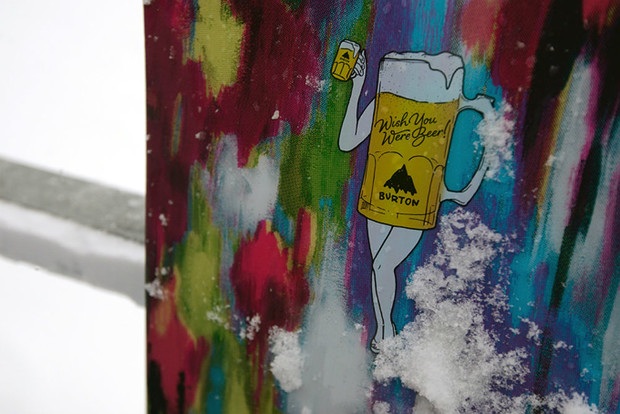 A close-up of her Burton graphics. 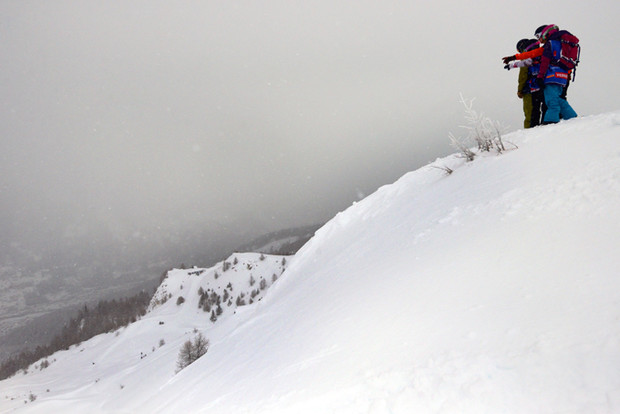 Seraji and the other athletes scope the competition venue in Verbier. 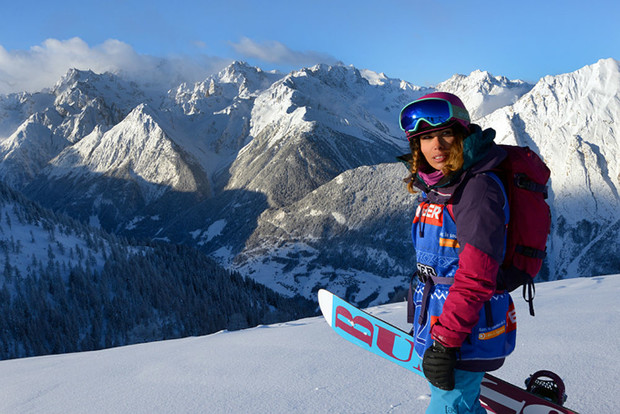 Getting ready to drop in on Day One of the competition.