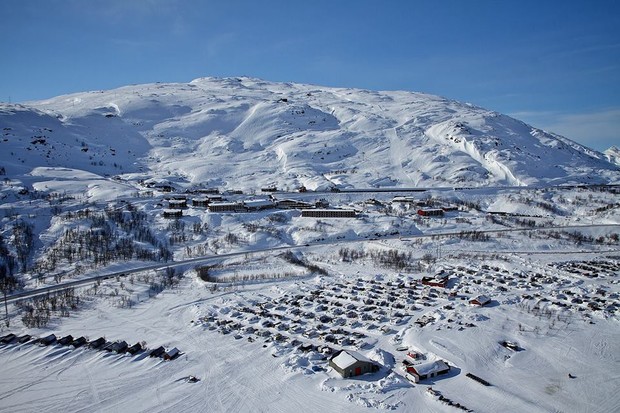 The Swedish ski area of Riksgränsen is hosting over 600 refugees from Syria and Afghanistan. Riksgransen photo.

According to Reuters, the Swedish mountain town of Riksgränsen, which sits over 120 miles north of the Arctic Circle, is hosting over 600 refugees from civil war in Syria and internal strife in Afghanistan, a beaming example of how far this tiny nation of 10 million people is going to open its arms to over 160,000 refugees. With a few months to spare before the ski season starts in Riksgransen in February–right now, the sun never even rises during the day–gracious hotel managers have opened their doors to refugees from climates so much warmer that many fear letting their children go outside for fear of their freezing to death, despite the urging of their hosts to lay down in the snow and take in the aurora borealis.

Spare rooms have been turned into mosques, yoga mats have turned to point east towards Mecca as makeshift prayer mats, and gym and academic classes have been put together for the guests, along with free sleds for the kids. Many will have to wait over a year, though, to hear the answer for their requests for asylum, and for now, wait it out at the world's most northernmost ski area, whose unique history includes its position as Swedish's version of Alaska's Thompson Pass–with ski bums sleeping in military tents at the base to go ski touring while British bankers take off next to them to go hell skiing–along with being the host of the one of the most groundbreaking events in the early history of freestyle skiing, which is now memorialized in the JP Auclair Memorial quarterpipe contest.