If you followed the world of freestyle skiing, you may know the name Dave Crichton. He was one of the most progressive freestyle skiers of the early 2000’s, but quickly disappeared from the pro ski scene. If you don't know, check the segment above from 2003, which would still stand today.

Dave was introduced to outdoor adventure at an early age. His family would go for regular ski weekends at Mount Pakenham in the Ottawa area when he was as young as 4 years old. His family also got him into surfing with regular vacations to the East Coast. Through surfing, Dave’s mother taught him and his siblings patience, as the three of them had to share the single used board his dad had bought.

The first year our dad got us a used surfboard to share amongst the siblings and after that everyone was just hooked. It was something we just kept doing since

Despite the fun of surfing, skiing quickly took priority. During his mid-teens, his newschool skills shot him to the top of the freestyle world. Although his original Pakenham ski instructor told his mom that his legs were not strong enough to be a skier, he won his first major competition in Slopestyle at the World Ski Invitation in Whistle BC in 2001 and never looked back. He would go on to place 1st in the 2003 X-Games Rail Jam and win the halfpipe competition in the 2004 US Freeskiing open.

Even though Dave has had such a decorated ski career, his long term focus remained on education, a long-term career and family. Family is also the reason we are talking about river surfing and not ocean. When we asked Dave about his passion for surfing, and why he chose to base himself out of Ottawa, being such an avid surfer, his answer was family. It was the same answer he gave for not moving to the mountains during the peak of his ski career. Dave grew up in Ottawa and stayed there most of his life. Although he was frequently traveling for ski competitions, Ottawa was where he always called home.

He currently enjoys a career in renovations and general contracting as he gets to work with people he likes, learns something new every day, has lots of flexibility and stays on the move. His roots are deeply planted in Ottawa and he does not see an overall benefit in leaving as his parents, his three siblings and 5 nieces and nephews are also living in the city. He knows that if he lives far, he will use all his time off to come home and visit his loved ones, taking away from precious and counted vacation time he would rather use to discover new waves around the world.

About ten years ago, Dave got to see the Munich wave, a 1 meter high man made wave on the Eisbach River in Germany. The wave is popular to river surfers since the early seventies. Out of curiosity, he googled “river surfing” and was surprised to find Ottawa in the top results as part of an article by professional surfer, John Newgard. He was pretty pissed off to learn that he missed out on surfing at home for all these years. He visited the surfing spot beside Bates Island and surfed the “front wave”, a smaller feature in front of the main wave, as a bunch of kayakers were on the good one. There were no other surfers that day but all the boaters were really welcoming. Every year since then, there has been more and more surfers and the vibe between surfers and paddler has been great. 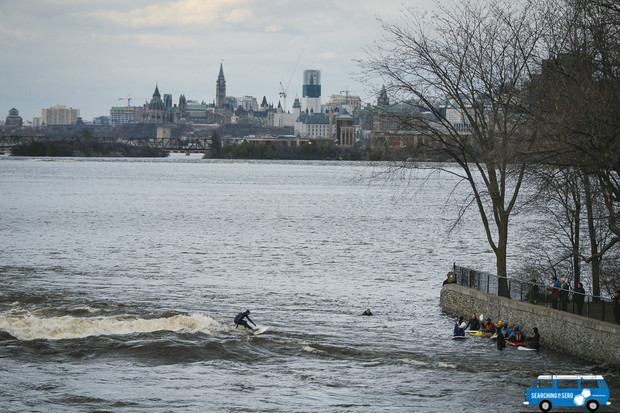 The surf and ski opportunities are not what kept Dave in Ottawa and he certainly prefers ocean waves over river waves.

SOME DAYS ON THE RIVER BLOW SOME DAYS ON THE OCEANS OR LAKES OUT OF THE WATER, BUT ULTIMATELY, WOULD I RATHER AN OCEAN WAVE AT MY DOORSTEP INSTEAD OF A RIVER WAVE, IF I COULD JUST CONVINCE A COUPLE OF PEOPLE I KNOW I’D MOVE TO NOVA SCOTIA OR BC!

Regardless, Dave is wise enough to recognize the unique pleasures that come with river surfing

IN THE OCEAN OR LAKES WHEN YOU ARE WAITING AND WAITING FOR THE WAVES, YOU GET A LITTLE FRUSTRATED SOMETIMES, WHEREAS ON THE RIVER YOU DON’T EVER EXPERIENCE THAT. YOU ARE THERE, THE WAVE IS GOING, SO IN SOME REGARDS IT’S MORE RELAXING

Dave definitely makes good use of the river. As soon as it is possible (the ice is out) to surf in the Ottawa area, Dave is out with his board almost daily. He also plans a couple surf trips to new locations when possible. Does he ever feel too tired to surf after a hard day of work? Not at all! Even with a physical job and long days, Dave is excited to surf.

I RIVER SURF BECAUSE I AM LAND LOCKED, AND I AWAYS DRIVE HOME SLOWER THAN ON MY WAY TO THE RIVER…ALL I THINK OF IS “I’M GOING SURFING, I’M GOING SURFING”…AND AFTER SURFING, YOU ARE COMPLETELY CONTENT, EXHAUSTED AND HAPPY. 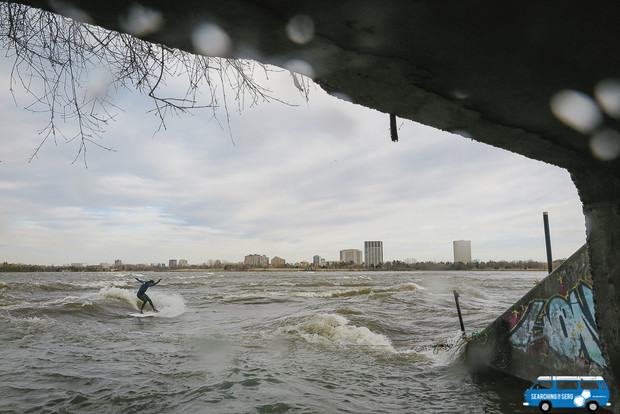 Before, during and after his ski career, Dave always surfed — it has been a constant in his life. With so much attention on his ski career, he notes that “it always would be a nice reprieve from the pressure, and another way to do the same type of sport but free from any expectations.” Expectations and pressure are indeed something that can take away from the pleasure of a particular sport. It is, however, possible to fall back in love.

AFTER I FINISHED UNIVERSITY I MOVED OUT TO WHISTLER BC FOR A SEASON, BECAUSE I HAD NEVER HAD THE OPPORTUNITY TO LIVE AT A RESORT FOR ONE WHOLE SEASON AND IT WAS AWESOME. I WOULDN’T SAY I HAD BECOME JADED ON SKIING, BUT I HAD JUST BEEN SO REMOVED FROM IT FOR YEARS AND HAD NEVER MADE AN EFFORT TO DO IT MUCH AROUND HERE (OTTAWA) WHEN I WAS BACK AT SCHOOL. GOING OUT THERE THAT YEAR WAS INCREDIBLE BECAUSE IT WAS THE 2ND SNOWIEST YEAR THEY HAD ON RECORD IN WHISTLER AND SO I JUST COMPLETELY FELL BACK IN LOVE WITH SKIING AND DETACHED FROM ANY OF THE PERCEIVED NEGATIVES, SKIING IS AMAZING.

Dave confesses though, he definitely misses the ski scene. Many of his best friends are still immersed in it and not a day goes by when he does not question how he could get more involved. How often he gets to ski each year varies from year to year and until this past year, he got on the hill quite a bit through coaching.

LAST YEAR WAS DEFINITELY A DROUGHT. LOCAL HILLS AND SOME JUDGING IS ALL I GOT, AND WE DIDN’T HAVE MUCH POWDER TO SPEAK OF THIS YEAR IN OTTAWA.

How long will a passion for surfing continue to motivate and satisfy Dave? No one knows.

It doesn’t look like Dave will stop surfing anytime soon, though. He has plans for a surf trip to Costa Rica this summer and there are numerous waves he still wants to explore. For Dave, family, surf and ski are important parts of balance in his life. And he will tell you, without them, he might have a hard time finding his happy place. One thing is certain; his Sero Search helped him get there. What about you? #FoundSero