Alberta's SkiBig3 Has a Pioneer Legacy 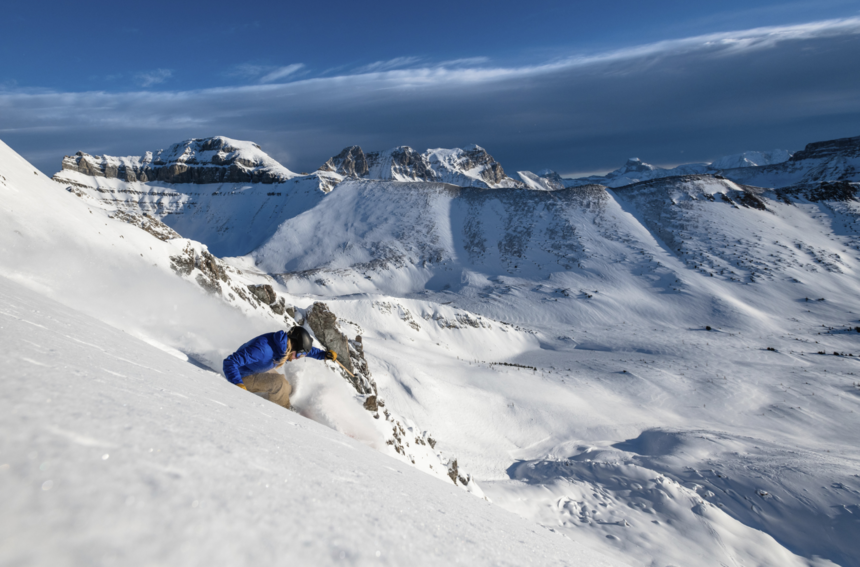 If this were Instagram, the scene before me might seem cliché. My ski tips dangle over a cornice while a steep, blue spine screams back up in the key of ecstatic tension. ER3 is one of Lake Louise Ski Resort’s marquee big-mountain lines in what feels like an endless amphitheater of cascading geology. The Canadian Rockies are some of the youngest mountains on the planet, and the Earth’s strata are on display like it’s been dissected. If I turn 180 degrees though, hundreds of placid ice-skaters look like ants on the frozen lake this mountain is named for—basking in quintessential Canadiana framed by frosted Christmas trees some 3,000 feet below. Meanwhile, I’m engaged in serious business.

To my left, Alex Armstrong, a local black belt, howls as she tips forward and drops in. Her first slashing left turn drifts over a vertical fin loaded by the west wind. She pins it through a tight outcrop of black rock, over what looks like a whale’s tale, and then into a double drop before straight-lining to the bottom. When she comes to a stop and waves, all I can think is, “There are 8,000 acres of this…”

To be fair, not all of SkiBig3’s offerings are as hair raising. But, true to the name, it’s all very big. Lake Louise Ski Resort has the second largest skiable acreage in Canada (behind Whistler Blackcomb), and combine it with Banff Sunshine Village and Mt. Norquay, all skiable on one lift ticket, and you’ve got a pretty solid case for the most expansive ski experience in The Great White North. And it’s all framed within the country’s oldest national park—Banff. 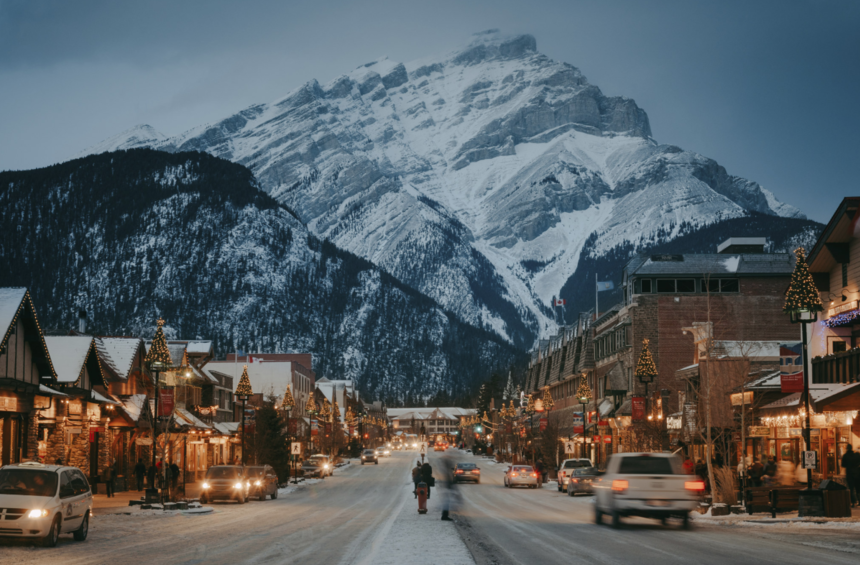 Banff Avenue with a view of Cascade Mountain. Photo courtesy of SkiBig3.

Take a stroll through The Village of Lake Louise or the historic town of Banff itself and you get an instant sense of wilderness legacy. Elks roam the streets and there’s not a single hint of industry in sight. For 133 years, this has been a place founded on the idea of untrammeled, raw, big-mountain hardiness, and of sharing that generationally.

As I slide to the finish of my own take on Armstrong’s run, a symphony of freeriders plays the mountain around like a string orchestra; vertical lines vibrate everywhere. From the 8,652-foot summit of Mount Whitehorn to the alpine scape of Paradise Bowl, it feels like we’re in a crescendo. But this is just the warm-up.

Over the top of the Paradise Chair, I’m hammered with a view of North American mountaineering’s earliest locales. There’s a full row of 11ers in site—the Canadian Rockies’ answer to Colorado’s 14ers—touting greater vertical relief and tumbling glaciers. The Canadian Pacific Railroad first brought Swiss guides here in the late 1800s in a bid to bolster mountain tourism, and it worked.

“Anything you look at, someone’s skied,” says Armstrong pointing to Mount Victoria, with its massive ice face looming above the lake. “And you’re just constantly impressed that pioneers were doing this in the ’50s.”

Armstrong, who grew up in Ontario but migrated to the Bow Valley for its long season—early November to late May—also loves the fact there’s no real-estate circus here, thanks to the park. “All the ski areas are family owned and just about skiing,” she explains. “Not to mention Charlie Locke, who owns Lake Louise, was one of the first guys to put in the Jasper-to-Lake Louise traverse,” a 200-mile ski route over rock and ice first completed in 1967. “It’s kind of ingrained in the culture. Everywhere you go there’s someone who’s pretty badass.” 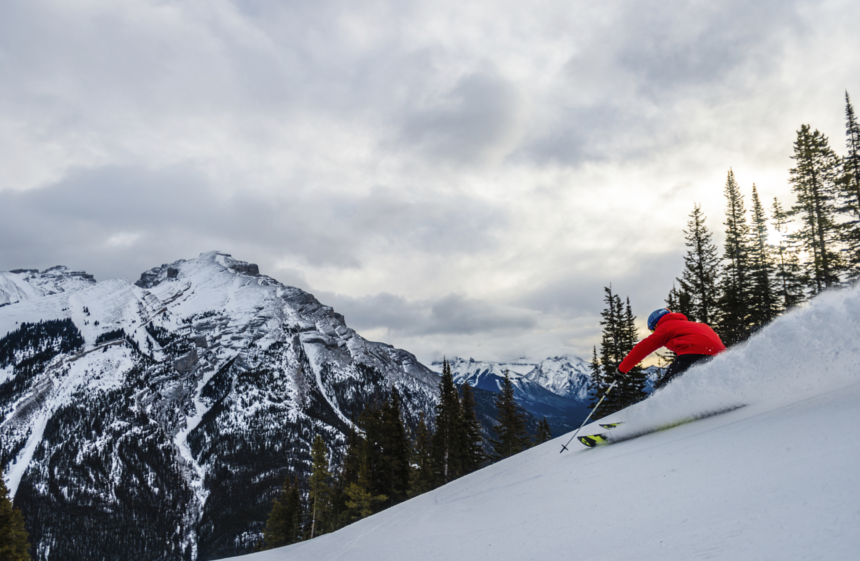 Among those is Armstrong’s good friend Ginny White, whose great grandfather started the Ski Club of the Canadian Rockies, and whose ongoing family legacy in the area is cemented in Museum of the Canadian Rockies. Now 25, White herself has a big-mountain acumen to match Armstrong’s, but says she still spends a lot of time at the smaller mountain that raised her, which stands guard above the town that also did.

“Everyone that grows up in the Bow Valley starts skiing at Norquay,” she says. “It was kind of the melting pot—plus daycare.”

And one hell of a daycare. Famous for its booming groomers, Norquay’s produced an impressive array of Canadian heavyweight speedsters and Olympians over its 70 years via the Banff Alpine Racers program. It helps that the 1,650-foot high vintage family “ski hill” is only 15 minutes from Banff, and that it also hosts night skiing twice a week. Nowadays, it’s equally loved for its park, and for a comically longstanding but friendly feud with Red Mountain Resort about which mountain got Canada’s first chairlift. Norquay’s was installed in 1948.

Sitting on the North American Chair, we climb quickly above the fray of technically gifted pre-teens burying their hips deep into corduroy on runs like Phantom and Black Magic. Mount Rundle rises to meet us in the distance, with Banff and Vermillian Lakes fanning out 3,500 feet below.

“Locals call this the ‘Big Chair,’” White tells me. “It’s not open as often as all the other chairs, but it’s kind of like the epitome of growing up. Once you get to ski the Big Chair, you’ve made it.”


We slide off and she leads down the sustained pitch of Lone Pine, which could’ve been made for Jonny Moseley—it’s sculpted with moguls and the ensuing thigh burn is impressive. White branches skier’s right, crossing into some chalky steep tree sections, but the fall-line doesn’t relent. By the bottom my quads are on fire, and my ears pop.

“People don’t really realize it,” she muses, “but Norquay’s the best place for a sneaky pow day. Everybody will be at Louise or Sunshine and you wake up and 10 a.m. and are like, ‘Oh my god, it snowed six inches!’”

Lift lines are never too crazy in the Bow Valley at any of the resorts, though. They have a way of swallowing people and spreading them out. “You could go to Louise on the busiest day, and maybe wait five minutes in line,” White says, adding that the town does a good job of distracting people too.

Though the 7,847-person former whistle-stop has gotten busier over the years, Banff’s maintained an authentic vibe. You actually have to work in the national park to live in it. It means the Old West feel of the place has prevailed, with its classic wood-shuttered main streets still feel like staged for gun fights. By the late 1950s, though, it morphed into restaurants, pubs, distilleries, chocolate factories, stores and galleries—all with a distinctly Albertan style.

“I would probably call it cowboy,” White happily concedes—about both the town and the resorts. “There are really amazing skiers right along with the old guy who owns his cattle ranch and still comes skiing every weekend.”

For Yosuke Mizuno, a first-generation Japanese-Canadian who also grew up here, that Wild West blend of cultural diversity was what originally drew his family.

“Oddly enough I never snowboarded when I was kid,” the perpetually stoked 35-year-old recounts. “I kind of dabbled a little bit, my parents took me to the hill when I was like five or six. But the sport I grew up doing competitively was figure skating. I actually didn’t start snowboarding until I was in my mid-20s.” 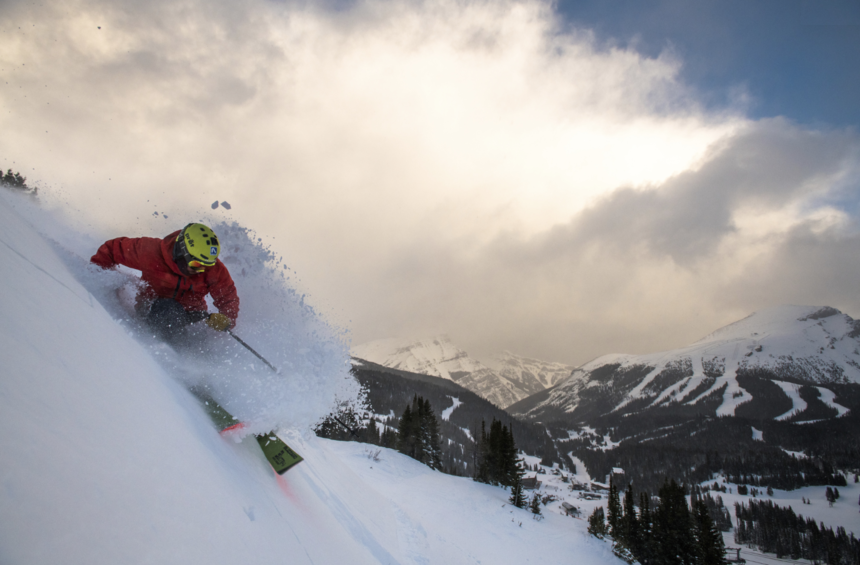 Following Mizuno around Banff Sunshine Village, you’d never know it. He throws front flips and backflips everywhere in the pillowy columns below the Standish Express Quad. As we bounce down the playful dish of terrain, we can see Goat’s Eye Mountain calling—a tidal wave of rock and snow frozen in time, mid break. Its broad alpine shoulder has a treeless horizon that flows into a subsystem of tributary groomed runs that flow like rivers back down to the gondola. The rest of the area sits on the Great Divide: where snow melt flows to both the Pacific and Atlantic Oceans.

“Sunshine’s one of those go-to resorts,” explains Mizuno, who rides all day then tends bar at the Banff Centre at night—one of the foremost arts institutions in the world. “Even if you’re at Sunshine by yourself, it feels like you bump into 25 homies. In the last couple years it’s just been getting a bit more consistent snowfall.”

Plus there’s always Delirium Dive, which only opens once snow has settled, and only to those with a transceiver, shovel, probe, and partner. It’s controlled as in-bounds terrain, but managed through a gate that only lets you pass if you meet the above criteria. Once you do, you trudge up a snowy catwalk to a crescent bowl full of preserved powder and 800-foot chutes.

Mizuno’s favorite run is called Bre-X, oddly named for a defunct Canadian gold-mining company that went bust in 2003 for fraud. With wind whipping spindrifts off the adjacent cliffs, Mizuno straight-lines into what looks like just a skiff, but turns out to be a swell of wind-transported blower. His first few turns barrel him, then he re-emerges where the gully splits. He banks hard left, and surprisingly abandons the lower half of the untouched bowl to instead hug the cliff side over a shoulder, where he steers into an overlooked area of burnt forest that ebbs into braided open channels. Mizuno knows each pillow and downed tree to jib by heart, and expresses it in vivid real time.

When it’s done, we pop back out at the Goat’s Eye station of the gondola, where we can either ski out or cycle back up. “Another?” Mizuno asks. 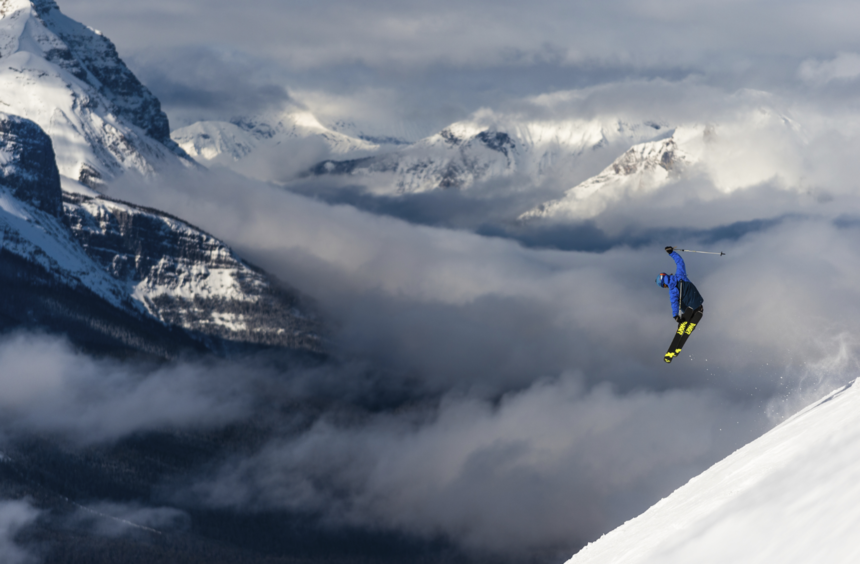 All SkiBig3 resorts share the same lift ticket, and this year, they’re all part of both the IKON and Mountain Collective pass programs. Photograph by Reuben Krabbe, courtesy of SkiBig3.