Andrew Whiteford has been synonymous with the explosion in popularity of POV cameras and the flood of self-edits that rob Youtube of its bandwidth year in and year out. The Vermont transplant to Jackson Hole was one of the first in skiing to turn himself pro almost exclusively through the use of his own self-edits, and then repeated the feat in the bike world. Here Andrew shares a few of his secrets that will help you turn your own POV edits from messes of shaky footage and unremarkable angles into the internet gold of tomorrow. 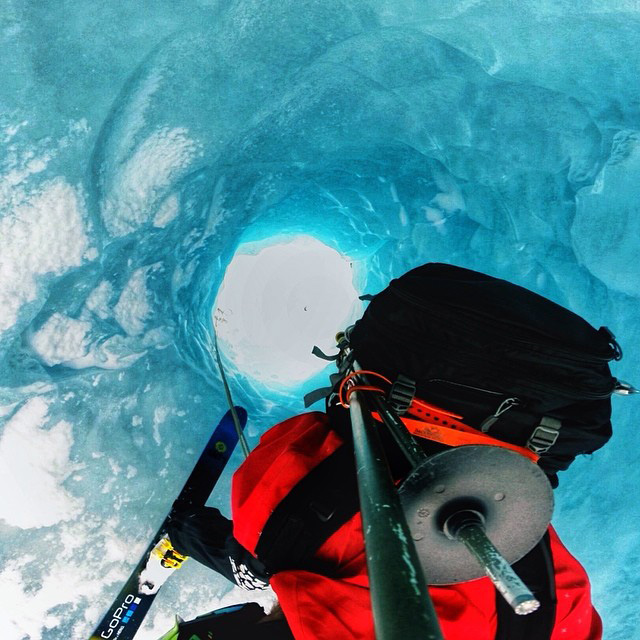 Andrew mounted his GoPro way up on an extended pole to capture his rappell into a conical ice cave in Alaska. Via Instagram.

I film a lot and then I try to be really selective with the clips that I use. I try to keep just the A-roll footage. I always just keep it in my mind the idea that I'm watching a ski movie, and what I’d want to happen. Sometimes I want that feeling of your stomach going up into your throat as you come over the edge of the cliff, which lends itself to the helmet-mounted view. If it’s something more immersive when you’re on a bike, you can use the chest cam, or the pole cam if you're skiing through something really narrow or super-deep powder. The pole cam is great, too, for when interesting things are going on around you or something ridiculous is happening to you, like a branch hitting you in the face. But in the end, I end up using the helmet cam so much because it tends to be the smoothest. And it's kind of a "set it and forget it" kind of thing, and I don't mind the Teletubby look so much.

The self-edit is always a fine line between having something that looks really cool and is compelling, but shows that you aren't trying super hard.

If I'm reviewing footage, I’ll find shots I thought weren’t super cool at the time that actually look really cool on camera. I'll always keep those in the running for shots to use, at least to mix it up. I think with ski mountaineering becoming a bigger part of what I'm looking to do, being able to show climbing footage and repelling and all that is really fun.

#2 - Keep It Short and Relatable

Nowadays, the POV market is so saturated. We could have our choice of a thousand different videos of the same thing to watch every day. So it's a battle to keep people interested for the couple of minutes that you can, if that. I struggle with keeping my videos short enough that people watch until the end. I often have to weigh that short attention span more than the value of any story that I'm trying to convey through the video. But in the end, it's just me trying to show how much fun I'm having out there.

The self-edit is always a fine line between having something that looks really cool and is compelling, but shows that you aren't trying super hard. That keeps it original and more relatable. Because if you start putting up flashy titles and stuff like that, all of a sudden, you're being compared against TGR or Brain Farm or Ant Hill. And then you've got to find a couple of million dollars for your budget.

#3 - Watch Your Angles and Tighten Your Mounts

The mistake that most people make with their POV edits is having really shaky footage, which is often due to not having the mounts on tight enough is. The angle of the camera is a big thing, too, and I still struggle with that. It’s often a balance of trying to find an angle where you can see the action and some of your skis or bike, but can still see the horizon so you have some perspective and don’t get carsick. 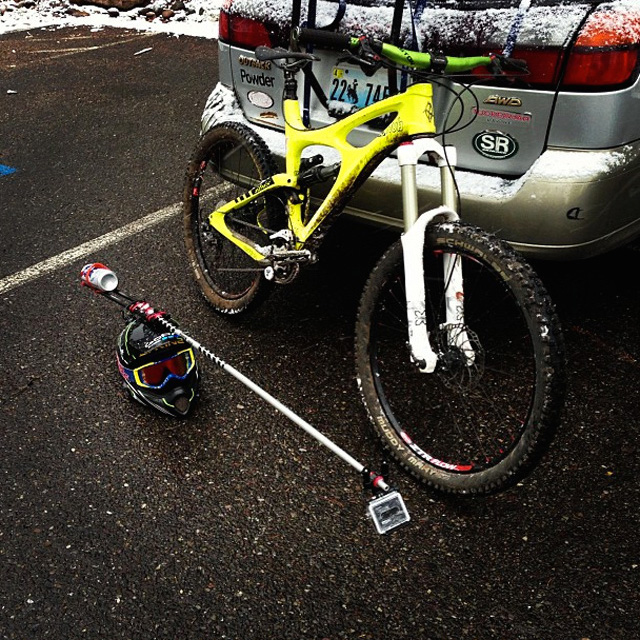 Whiteford's awful shy when he's utilizing his most outlandish POV mounts, so he picks the worst weather days to use tools like his "Narwal mount" in the hopes no one else is out on the trail. Photo via Instagram.

When I’m shooting my POV stuff, I’m often out alone. Particularly if I'm using some really dorky mount, like the Narwhal cam protruding from my helmet. That Narwhal cam involved strapping a 150-centimeter aluminum cross-country ski pole to the top of the helmet and attaching an L-bracket on the back of the helmet, into which I put a 24-ounce PBR tall boy as a counterweight. After all, you gotta have something to drink at the end. Any time I went out with that thing, it was on a shitty weather day so I wouldn’t run into anybody else on the trail. Because I just looked like a total goober. And I only rode the trails I knew super well and could ride smoothly so that the footage had the best chance of coming out well.

While we always focus so much on the video, finding some cool audio to go along with it is absolutely critical. The best-case scenario is the actual activity that you're filming has some cool ambient audio. I've always felt that the soundtrack plays a huge part in what you're trying to put out in order to make it watchable, too. Obviously, I didn't have Wiz Khalifa's permission to use "Black and Yellow,” but on the small side of the spectrum, I think you can get away with a lot. When GoPro shares one of my videos and gets a couple hundred thousand views in a few minutes, that's when I usually get a cease and desist letter.

Want to know more about Andrew Whiteford? Read our May 21st interview with Andrew about how he became internet famous here.