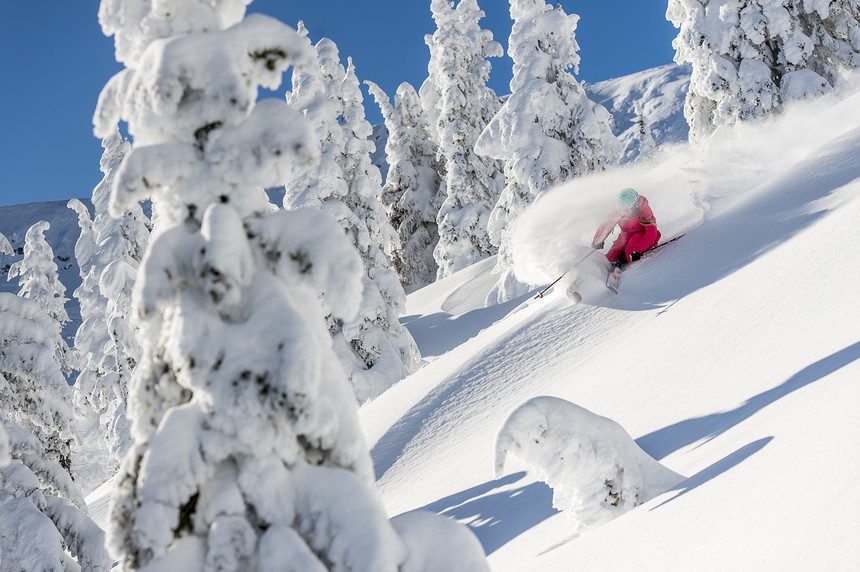 “I can’t tell you, but I’m happy to show you my second-favorite stash,” says Canadian skier-cross Olympian Ian Deans with a mischievous smile when I ask him what his go-to Big White Ski Resort zone is after a fresh snowfall.

We did just meet for the first time 10 minutes ago at Beano’s Coffee Parlor, so I can’t expect him to give away all his secrets. Now Deans and I are soaring down Perfection, which is exactly that this morning. After the overnight groomers had finished their work, the forecasted precipitation came through, blanketing the corduroy in four inches of powder as a light and refreshing as an Okanagan Valley Riesling.

I delude myself into thinking I can keep pace with Deans as he blasts super-G turns down this blue square, leaving a contrail of billowing snow behind him. I catch up to him at the base of the Rocket Ridge Express. Now we’re bound for Deans’ “second-favorite” powder playground—the Falcon Chair.

But first we have little a cross-mountain traveling to do. Deans, I soon learn, has a deep connection to Big White. He learned to ski there, went to school there, and built friendships on the slopes of Big White that will last a lifetime. His relationship with this resort, located in the snowy Okanagan Highlands 35 miles southeast of Kelowna, continues today; he’s one of three Big White sponsored Olympic athletes, along with fellow skier-cross competitor Kelsey Serwa and snowboard-cross athlete Tess Critchlow. Perhaps there is something in Big White’s bounty of playful terrain that breeds solid skier-cross athletes. Though Deans travels the world to compete, his skiing soul is rooted at Big White, and at what he calls its “underrated terrain.”

“Big White is definitely tailored to the rider with an intermediate ability, but there are plenty of chutes and technical terrain for the rest of us,” he says as we leap frog over to the aptly named Powder Chair, an aging triple that, this season, will be replaced by a new fixed-grip quad. The new chair is part of $10 million in resort upgrades undertaken in 2018 that will make Big White the proud owner of Canada’s second-largest lift system, as well as Canada’s largest ski-in, ski-out resort. Big White boasts on-hill accommodations for more than 17,000 guests. 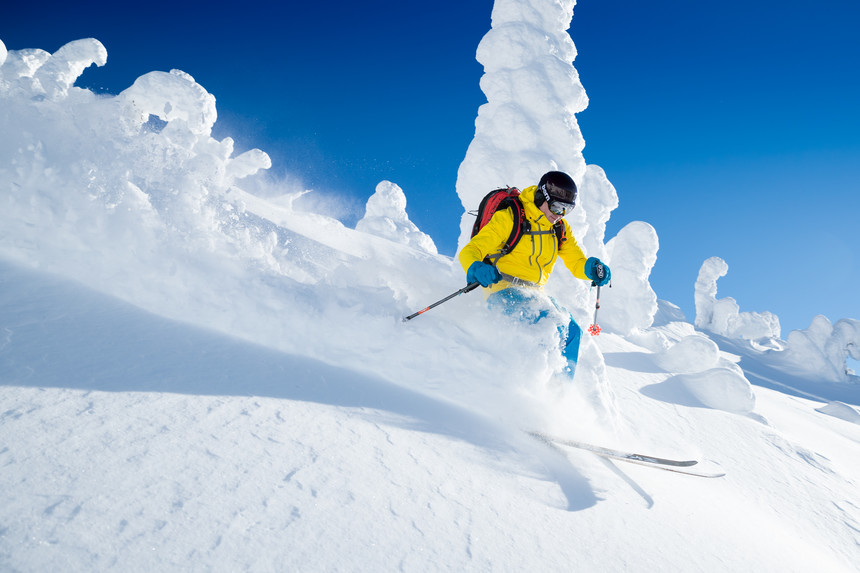 Deans and I play for couple of laps in the untracked Corkscrew Glades, and then bee-line it for the Falcon. The last time I experienced Big White I was a mediocre teenage ski racer. I remember it snowing non-stop and trying to survive a slalom course with what felt like waist deep ruts. I finished mid-pack, as usual, then dispersed with a few teammates to free-ski for the rest of the afternoon.

When I arrived here late last night, more than three decades later, the village was quiet in that early January, post-Christmas kind of way. Feathery light snowflakes drifted from the darkness and sparkled in the glow of street lights. After checking into my suite at Stonegate Resort, I walked through the main village—cold, dry interior snow crunching underfoot. I naturally found my way to a Big White institution—Snowshoe Sam’s, where according to a sign above the bar they’ve been “Helping Ugly People Get Laid Since 1980.” Jugs of lager slop generously onto the tables. Aussie accents abound. Big White is independently owned by an Australian family that fell in love with B.C. powder, hence there’s a strong connection with folks from Down Under. If I had visited two weeks later, I would have arrived amid impromptu Australia Day celebrations. After a burger, fries, and a beer, I walked back to the Stonegate for a restful night, kicking up clouds of ultra light fresh snow that had accumulated while I was observing the shenanigans at Snowshoe Sam’s. My stoke was on for tomorrow.

Now as Deans and I ride the Falcon Chair, we ogle the steep lines skier’s right and left of the lift. Deans calls it a “giant playground,” packed with terrain that invites creativity on skis, going on, under, or through a multitude of features. Powder hounds are already beginning to assemble on the upper mountain’s black-diamond offerings, as Deans and I off-load and double-pole left. We pause next to a trio of stunted subalpine trees encased in rime and contorted into shapes that could be straight from the colorful imagination of Dr. Seuss. Deans disappears down Grizzly. He knows every cliff feature, hidden avenue in the glades, and wind scoop. When he tells me he could practically ski Big White top to bottom blindfolded, I believe him. The boy can rip.

This is classic choose-your-own-adventure terrain, and before long we have notched a half dozen laps on the Falcon. The windless 10-degree air feels crisp on my face, grown soft after too many West Coast winters. But this is the sweet-spot mid-winter temperature at Big White. 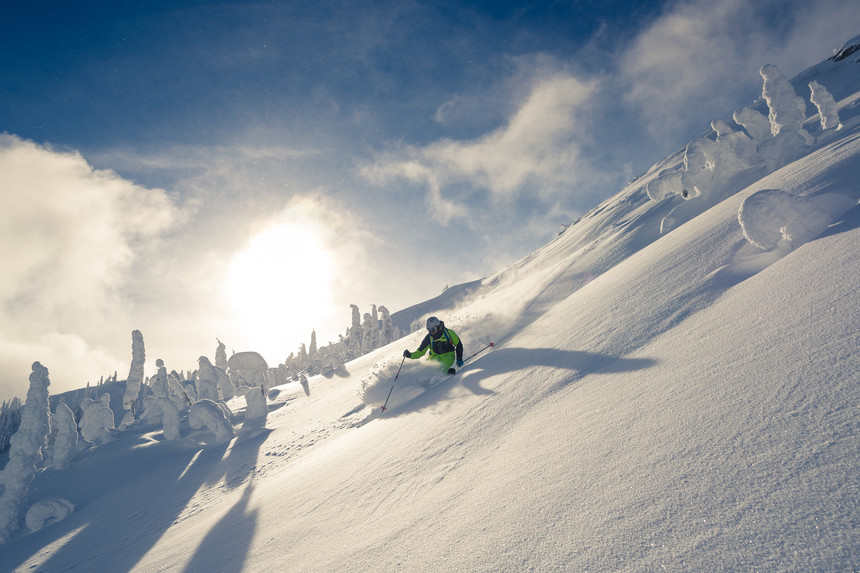 Deans has some sponsored athlete obligations in the afternoon, so he leaves me to explore more of the mountain. Big White has big plans to grow and is setting lofty targets with its long-term master plan, which would include development of East Peak, currently an off-piste stash, 55 percent of it classed expert.

I, however, have a soft spot for retro ski lifts, so I ski my way over to the Alpine T-Bar, which drags me to Big White’s 7,600-foot summit. A ski patroller knocks rimed snow off a boundary rope line while I scope the panorama. Nearby to the west, the Okanagan Valley is covered in a thick bank of low-lying winter fog that makes me thankful to be up here above the clouds beneath a blue sky, mottled by lazily drifting cumulus. To the east, the distant granite spires of Valhalla Provincial Park spike the horizon. I’m also thankful for the good visibility, much better than trying to navigate unfamiliar above-tree-line terrain in whiteout conditions. At the top of the T, I pick my way among a band of exposed rocks, before dropping into The Cliff, Big White’s double-black territory. The back bowl is almost devoid of skiers, but the snow is in fine form, with enough early-season foliage showing through to keep me alert and sharp on the skis. Lower down, I dip into trees on another double-black, Camel’s Back, where more hidden caches of powder brush my boot tops.

It's been a full day, rediscovering a mountain that was little more than a misty memory of relentlessly falling snow, shivering at the top of a slalom course awaiting my start, and counting the minutes until I could ski for fun with my buddies. Strolling through the village, I spot a poster advertising Gourmet Ski Week, later in the season in March. The Okanagan Valley is a foodie and wine lover’s paradise and Big White has embraced this side of life with events like this one, which combines gourmet lunches, après ski activities, group ski lessons with like-minded gourmands, and an invitational kitchen throwdown with executive chef Rob Walker. The annual Big Reds at Big White event in December, which celebrates Okanagan Valley red wines, is another way that the resort integrates the Valley's culinary and wine scene into the mountain experience.

But at its core, Big White is, and always was, all about the simple joy of skiing. As I wander past Snowshoe Sam’s, loud music escapes through the opening and closing front doors. I continue back to the Stonegate for a well-deserved soak in the Jacuzzi.

Though the resort continues to grow, and though Deans currently lives in Seattle between the racing seasons, Big White will always be the hill he calls home.

“Big White is a community. Racing can be extremely stressful and sometimes make you question why you do it. For me Big White is a place where I can go de-stress and reconnect with why I love to ski and forget about the rest,” Deans says. “Besides, the snow without a doubt is world-class. Steady, light, and fluffy dumps all year and the temperature is always in the money zone of 26 to 14 degrees.”

And that’s reason enough for me to come back. 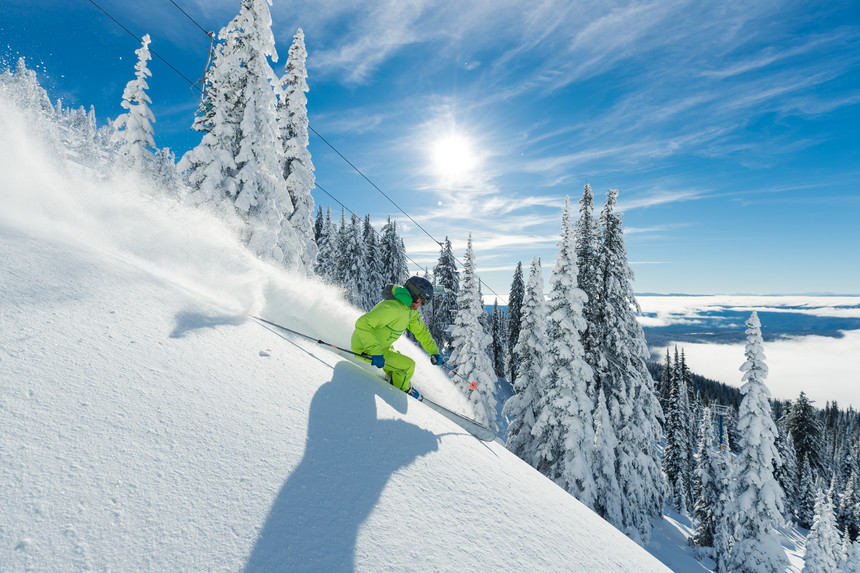