Carving Through History With Chuck Barfoot Part One: The Old Days 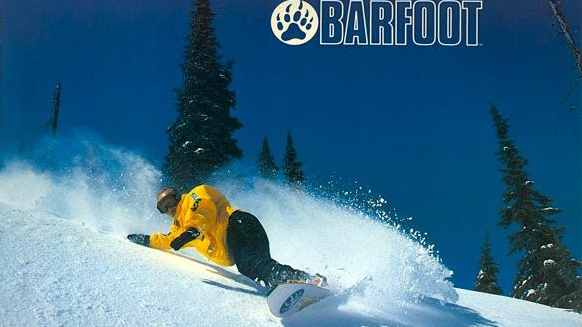 With each year that passes, the opportunity for seeing, meeting, and speaking with a snowboarding legend diminishes. The passing of Tom Sims last September is a stark reminder of this. The ranks of the original riders, the guys who took what we would consider simple wooden or fiberglass planks to the snow, are fading fast. On Friday February 1st at the SIA Snow Show, I was fortunate enough to come across one of the original riders. I was lucky enough to meet Chuck Barfoot.

After speaking to Chuck and his board-building partner Ernie Delost, I was nearly at a loss of words. I had never met a stranger who had lived through so much snowboarding history, let alone helped to create it. I knew I needed to learn more about this man. Before he parted to meet with old friends on the snow show floor, I asked if he would be willing to do a brief interview with me the next day.

Being simply a down to earth guy, he agreed to come back the next morning and speak with me for fifteen minutes. This fifteen-minute meeting turned into a thirteen-minute interview plus another twenty minutes of great conversation, just talking, laughing, and enjoying the snow show vibe.

Chuck Barfoot is a humble, inspiring, and truly good man. We should be thankful he loves snowboarding so much, because without him we might still be riding wooden boards with black grip tape and skyhooks for bindings (ok, it probably wouldn’t be that bad).

This is Chuck’s story.

Chuck Barfoot started surfing in Beach Haven, New Jersey in 1961. Nine years later, in 1970, he moved to Santa Barbara, California and was living with Tom Sims. Chuck was well positioned to help craft the snowboarding industry that we know today, but he didn’t know it.

It was 1977; he was working for Tom Sims, building prototypes and doing research and development on the classic skateboards and surfboards that Sims produced. At this point, he had never even touched his feet on a board and placed that board on the snow. He was a surfer and a skater. He had no idea how much his life would change.

One day, Tom Sims approached Barfoot with a project Bob Webber and Tom had worked on. According to Barfoot, it was a “yellow plastic ski board with a skateboard deck on it.” It had black grip tape, and skyhooks for the riders’ feet. The board worked, but it had some problems.

The grip tape would pack with snow, and the skyhooks were permanently mounted regular or goofy. There was no switching the skyhooks from regular to goofy, or vice versa. At the time, these snowboards were a rare thing (the word “snowboard” wasn’t even used yet). If you had a board, you wanted to share it with all your friends. With the skyhooks mounted only in one direction, if your friend was regular and you were goofy one of you was simply out of luck.

Tom Sims approached Barfoot with the crude snowboard device and said, “What can we do to fix these problems?” Barfoot gave the board a quick look up and down and replied, “Well first, get rid of the black grip tape.” He replaced the standard black tape with a sheet of clear plastic grip tape, and then sprayed the board with a coat of silicon to help relieve the skate deck from packing with snow. Thinking about how to fix the skyhook problem, Barfoot took rubber bungee cord and bolted it to the top of the skate deck, running from tip to tail. Instead of having a set mounted position, a regular-footed rider could now stand on it, set his feet underneath the bungee, ride down a hill, and then hand the deck over to his goofy-footed friend.

Snowboarding could now be shared.
Sims knew Barfoot was onto something. Shortly after this, Sims approached Barfoot again and asked, “How about building me a fiberglass prototype of a board I built like in 1963?“ Always the tinkerer, Barfoot began working on what he described as, “a little four foot bullet with a v-bottom.”

At this point, it was 1978 and Chuck Barfoot had still never ridden a snowboard, a snurfer, or even one of those plastic ski boards. Barfoot finished his fiberglass copy and knew he could do better. He took the board back to Tom Sims and immediately said; “I can build something way better.”

Sims told Barfoot to go for it, and go for it Barfoot did. He wanted to craft a board that would let surfers and skaters like him carve through snow just like they were surfing or skating.
Barfoot began designing his first snowboard in his head; “The idea was like putting two skis together, with camber and channels.” The channels ran along the sidecut of the board, allowing loose snow to flow (at this point, boards were only made for riding powder). He started by building a mold, “a solid rectangular fiberglass shape, with camber, v-shape, nose and tail lift, and sidecut.” After the mold was complete, Barfoot built his first snowboard.

It was time for him and Bob Webber to begin the nearly thousand-mile journey from the Southern California Coast to entry three between the Snowbird and Alta ski resorts. At the time, entry three was a series of switchbacks winding up the mountain. He had no idea that his life was about to change forever.

We aren’t all lucky enough to first experience snowboarding riding in 18 inches of champagne Utah powder on Christmas day, but lucky for us, Barfoot was.

“I remember taking off, taking my very first toe and heel turns, 15 yard beautiful carves all the way down the freaking mountain.” Chuck reminisced. He wore a red, white, and blue jersey, and after getting to the bottom he grabbed his board, held it high above his head, and screamed. “YEAHHH!”

Chuck Barfoot and Bob Webber weren’t the only ones enjoying a miraculous Christmas. By some stroke of luck, fate, or both, they spotted another rider, sporting a snurfer-like board with a rope on the nose, coming down the mountain. It ended up being Jeff Grell’s older brother, Jay (Jeff was one of the designers of the highback binding).

Barfoot was amazed. “We were like ‘Oh my god!’ So we snowboarded together all day long.” The three pioneers enjoyed a day of powder, laughter, and camaraderie that truly created history. To this day, riders across the world unknowingly seek to emulate those three young men as they search for that perfect day of freedom, riding, and friendship.

Barfoot continued to work for Sims for the next several years. But that day was the real beginning of Barfoot Boards. His mind and more importantly his heart were in it. He worked hard, building one of a kind snowboards. Each new board was a little bit different from the last, a little lighter, just a bit more flex, a new shape.

“I did about fifteen different models until I had boards that worked, really-really well.” He described his motivation for building boards. “It was basically just to surf snow.”
With such a simple goal in mind, Chuck lovingly built boards for Sims until the 1980 – 1981 season, when he left Sims Snowboards and founded Barfoot Boards. He continued to build individually crafted snowboards and skateboards for the next twenty odd years. Until, around the 2003 – 2004 season, his company had grown too large. It was out of control and unfocused. It became such a problem, that he decided to stop producing snowboards (he continued to craft surf-style longboard skateboards under the Barfoot brand).

Chuck didn’t sound happy as he said this. “Things were being done for not the right reasons. It was more about money and all that stuff.” Chuck was fed up with the corporatism that had invaded his, and so many other good companies.

“My philosophy has always been, build something really good, that works. Take care of someone and they'll be back, and your company will grow and the money will come with that. And that's not the corporate world. And I am so far away from the corporate world.”

Fast-forward ten years, and lucky for us, those same snowboard corporations, the mass media, and most importantly, the internet, created a huge market for snowboarding. The market was so big, that people wanted something smaller, something personal. People began demanding a product made just for them.
“The internet got so many people getting ahold of me saying, ‘You need to be building boards again. My fifteen year old Barfoot is at the end of its road, I need a new board.’ So my old partner, Ernie Delost, him and I got back together again. So him and I, we are hand building the boards in his factory.

We design them together. We hand build them in house, and that’s just what I love doing. So that’s why I'm building boards again. It’s for the right reasons.” As Chuck said this, the grin on his face widened to remind me of a child’s first visit to a toy store, his mind hungry for the possibility of building even greater adventures.

What really amazed me about my meeting with Chuck Barfoot was his willingness to become my friend after just speaking a few words with me. I never once caught a rude tone come out of his mouth, and it was hard to catch him without a smile. The word that kept coming up was “personable.” With his business, Chuck wanted to, and still wants to create a personal connection with every single one of his customers (and many more lucky people, like me). He was also very humble. It never once seemed like he was boasting, or trying to make what he did out for more than it was. Long after our interview was over, and just before we said our goodbyes, Chuck Barfoot left me with one last history lesson.

“All credit really goes to Dimitrije Milovich, Winterstick founder. He was the one that set the right direction. P-tex base, sidecut, steel edges, swallowtails — it was straight up surfing on powder-no rope attached.”

Remember to check back later this week for part two, “Barfoot is Back,” a sneak peek at the new Barfoot Boards.

Save big on 2012-2013 Snowboards when you buy online through Dogfunk.com, while giving back to TGR