Chasing Swells and Sunsets along the Chilean Coast

We heard a banging noise as our "new" 1998 Subaru rattled along the dirt road. I looked at my husband, Alejandro, my eyebrows raised; he looked at me, smiled and shrugged. Onward!

We had been in Chile for nearly four weeks, having arrived on a one-way ticket with our climbing, surfing and backpacking gear and the simple plan of buying a car and exploring the country until we found a place we loved; then we would dig in and write the next chapter of our lives. After spending the first few weeks working on a project at an organic vineyard in Popeta, and getting on some beautiful granite in the Andes just outside of the tiny mountain town of Coya, we decided it was time to have a little reunion with the Pacific ocean. 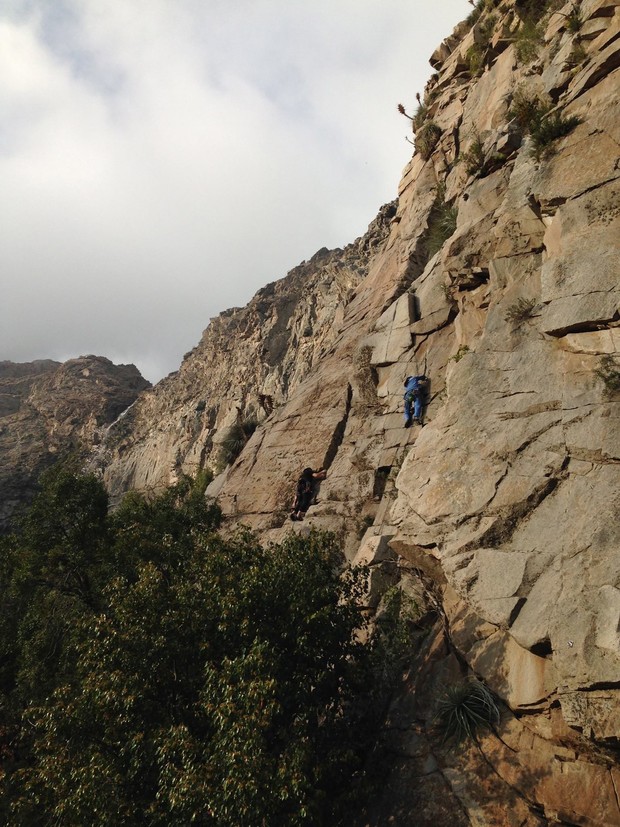 I looked down at the practically useless Maps app on my iPhone- our little dot appeared to be moving along a "road" according to my phone, but as I looked outside it seemed to be more of a cattle path than a route for vehicles. Another loud bang made me wince. I zoomed out on the map and could see whatever path we were on was headed for the big ocean blue- good enough for me! 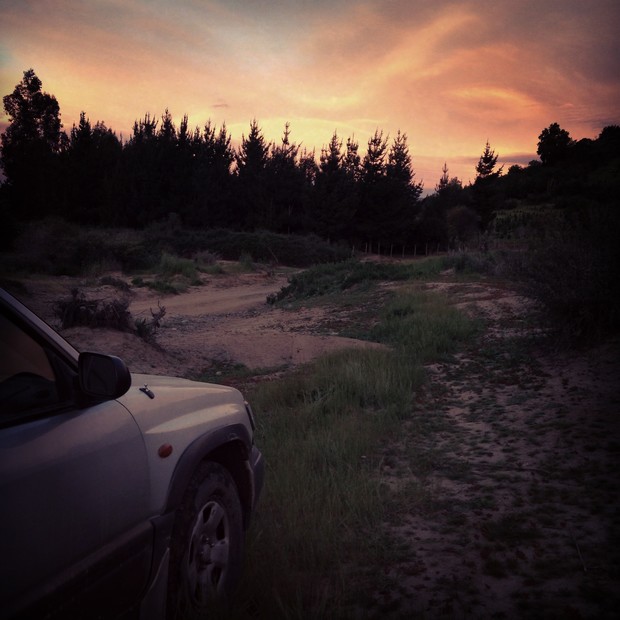 Getting good beta about trails, swells and climbing routes here in Chile had been a little bit difficult. There were the obvious places, toted in the guide books and promoted by the big tour companies. But we were looking for something more authentic, we wanted to discover the sweet spots, the quiet places where we could throw up our tent and spend days (or maybe weeks) exploring on our own. A friend of a friend had told us there were a few good breaks out by El Tabo and El Quisco, just south of Valparaiso. So we decided we would start there and cruise south along the coast as far as we could go. 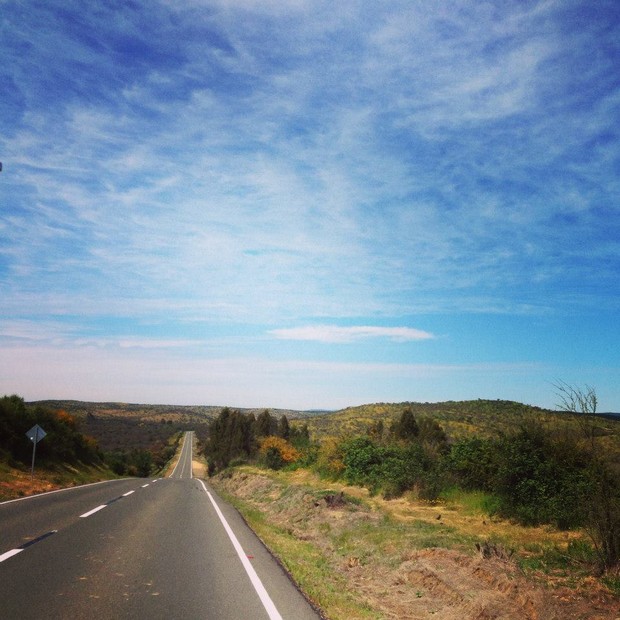 Pavement. Oh the luxury of pavement after hours spent rattling along dirt roads. The pasturelands stretched out widely before us and the sunshine warmed the dashboard of our fully packed car. I was ready to see the Pacific again. It had been six months since we left California, six months since I'd donned my wetsuit and paddled out into the ocean. And although mountains will always be my first love, I missed the ocean.

We reached El Tabo at dusk, the town was practically silent, the silence only occasionally broken by the barking of some random street dogs. It's a tiny little town, and most of the buildings were boarded up, we guessed it was because it was October, a few months before the summer season. We drove out to the beach, parked and watched the waves. The ocean was nearly as quiet at the town, but the ocean air was fresh and enticing, so we went in anyway.

Seeing the coast again, feeling the cold salt water wrap itself around me, it felt like I was hugging an old friend; or meeting a new friend who reminded me so much of an old one who I loved deeply. I felt, for the first time since coming to Chile, like I was coming home. The familiarity of the coastline was a welcome relief from the vastly different way of life down here. 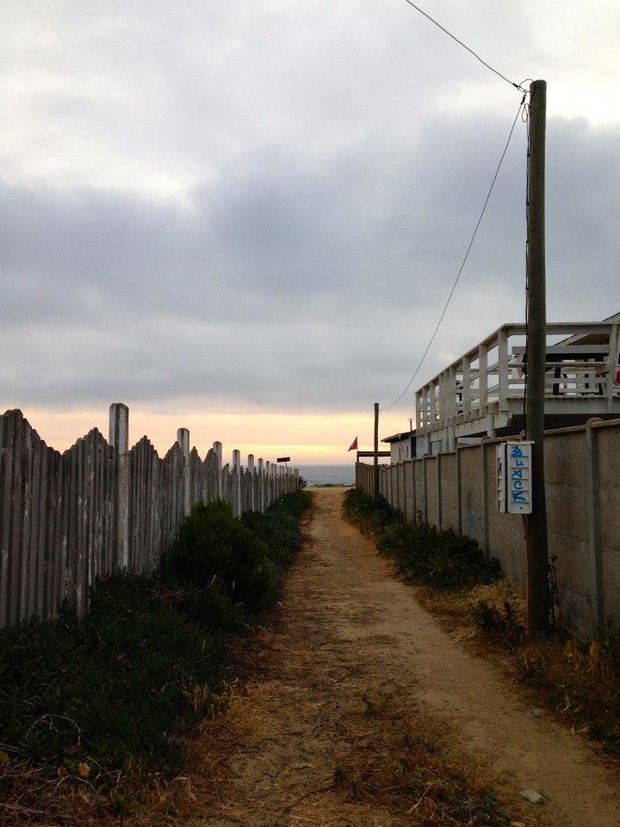 The next morning the waves were still small, and the town still totally dead. We tried to find some wax for our board, but the only two stores that were open pulled out floor wax each time we asked. My husband is a native Spanish speaker, so I knew we weren't losing anything in translation, they just had no idea what we were asking for. They told us to head north to El Quisco, where we would find the only surf shop between here and Pichilemu (which is true, by the way, so if you need to stock up do so in Santiago or El Quisco before heading south).

El Quisco was only slightly larger than El Tabo, likely because it is right next to the famous La Casa de Isla Negra, the former house of Chilean poet Pablo Neruda. We stayed on the main road until we saw a poster of a surfer hanging in a storefront, this was the spot. We pulled in, only slightly discouraged by the padlock we saw on the door. Alejandro walked into the restaurant and the owner offered to call the shopkeeper and see if he would come open up. Lucky for us, he was in town and offered to swing by in an hour. In the meantime we decided to dig into a tasty pollo asado con papas fritas and enjoy an afternoon Escudo. When the owner finally showed up, we stocked up on surf wax. He told us we shouldn't miss Buchupurero and that he had land down there, right on the coast, where we could camp as long as we wanted. 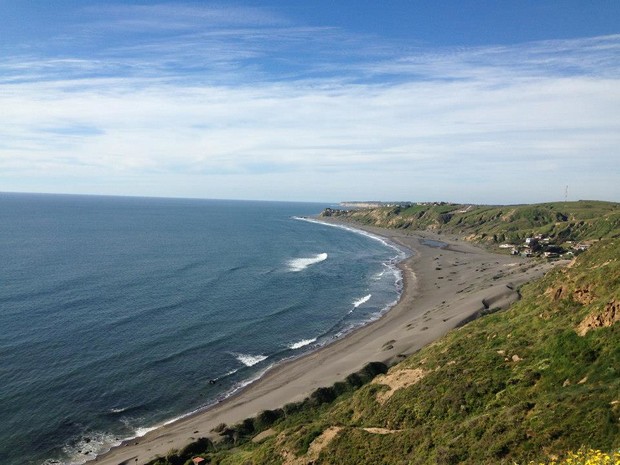 We hit the road again, driving south along the coast. The further south we drove the more remote it got. A few hours south of El Tabo, we reached the tiny little town of Navidad, which has free wifi for the whole town. That is pretty damn remarkable considering there are so many well developed places in Chile where it is nearly impossible to get any internet access at all, and then you come across these random little towns in the middle of nowhere, and the worldwide web is hovering above, ready for access.

Right next to Navidad is a super sweet little spot called Matanzas. This tiny little town is pretty well known for great wind surfing and SUP. There are a few ecolodges built into the hill, one fancy looking restaurant built with sustainably repurposed materials, and a pretty clean and basic surf hostel (which was closed when we were there). As with the other towns we had passed though, Matanzas was pretty quiet since we were still in the offseason. It is a gorgeous little place, it reminded me a bit of Big Sur in California, but way less developed- and we toyed with idea of buying some property nearby and setting up an ecolodge of our own. We checked out some of the developed campsites, which were all empty by the way, but the owner was charging 20 luca (nearly $40!!), which seemed crazy. So we bought some wine for 2 luca, fired up the JetBoil and enjoyed dinner out on the beach. After an incredible sunset and the darkness of night settled in, we pulled our tent from the car and hiked out past the dunes, setting up camp along the cliffs that lined the shore. 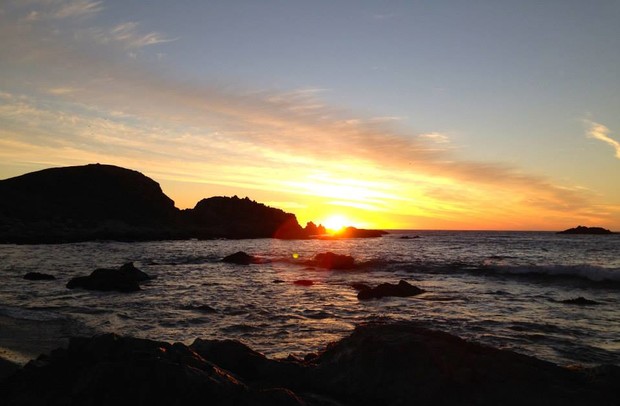 We began the next morning paddling out with a clear blue sky and warm sunshine. A few bodyboarders were in the water, as well as a guy surfing waves with his SUP and his bulldog, who was also wearing a wetsuit. After a few days of great weather, quiet coastal camping and soft left breaks, we hit the road again- this time bound for the now very well known Pichilemu.

Although Pichilemu is touted as the biggest surf town in Chile, you still arrive via a dusty dirt road, which is kind of comforting in a way. The city itself is much bigger than any of the others we had passed through since leaving Valparaiso (aside from San Antonio, which has a pretty big port). Even with it's larger size and population, it was still sleepy, without many people on the streets or in the water. Still, the swell was clean, the left breaks seemed to stretch for miles, and we couldn't wait to get in the water. 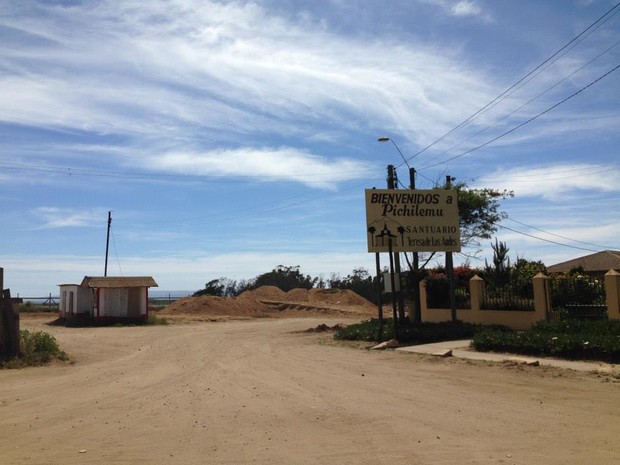 Since we only had one surfboard that we'd been sharing, we decided to rent one for me so we could paddle out together. At the recommendation of a local, we headed to Escuela de Surf Manzana 54 on La Puntilla beach to get hooked up with a board and also find a place to camp. These guys were great- super friendly and laid back. They told us about a camp spot on the hill just above their shop, it overlooked the point and even had electrical outlets at the primitive camp sites. Sweet. We got the board, threw on our wetsuits and climbed out over the rocks, dropping into the soft waves. Even with a bit of overcast, it was a beautiful day. A few other guys sat in the lineup, everyone was easy going and enjoying. After a sweet little session, we paddled in, grabbed the car and cruised up to the top of the point to set up camp.

The place was totally abandoned, again thanks to the offseason; but with a quick phone call someone walked up with a key to the padlock and opened the gate for us. We spent the next week camping up there all alone, just us, two horses and four street dogs who adopted us, guarding our tent every night. It was pretty sweet to open the tent, check the swell, get in a session and then end the day with a little yoga and a view. 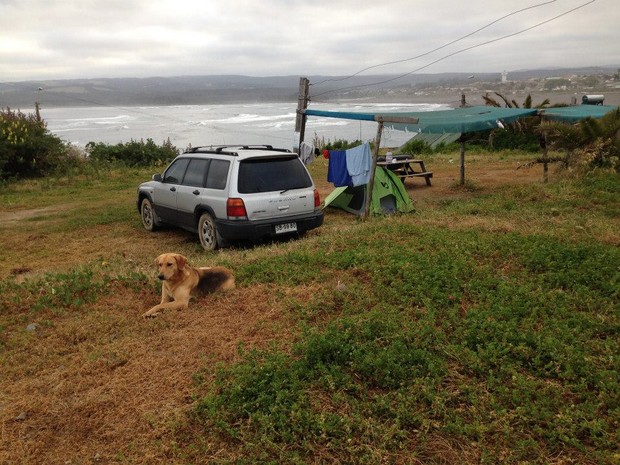 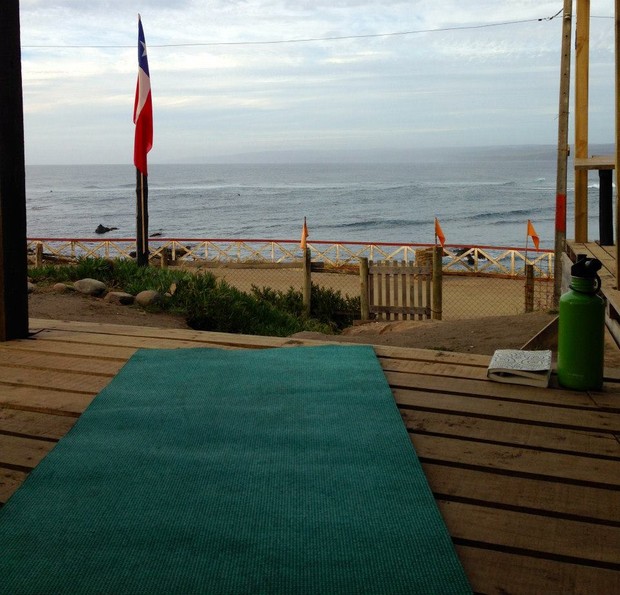 Pichilemu had plenty to go around, but while we were here we also had to check out the famed Punta de Lobos. This section of coast is truly stunning, and just as we did at Matanzas we couldn't help but daydream about buying some property around here. It's no wonder there is a Save The Waves campaign to protect this stretch of shoreline- a worthy cause that we have joined since settling down here in Chile. Check out the details here and support if you can!

After a few weeks of coastal exploring, we ran out of road- unlike Route 1 on the west coast of the USA, there is no thru-road taking you along the entire coast of Chile. So, a little bit south of Punta de Lobos we decided to head east, back to the mountains for some climbing and backpacking. Given the skinny nature of Chile, I knew we would be seeing the ocean again soon, and felt rejuvenated from this reunion. I looked out the window, marveling at the salt marshes of the Laguna de Cáhuil. Just then the pavement stopped and we rolled up the windows to keep the dust from flying in. We cruised along the dirt road for a while, weaving narrowly through woodlands until the "road" seemed to disappear into a fast flowing river. I looked down at my iPhone map, cursing under my breath. I swore this was a road. I look at Alejandro, my eyebrows raised. He smiles and shrugs, stepping on the gas as I let out a laugh. Onward! 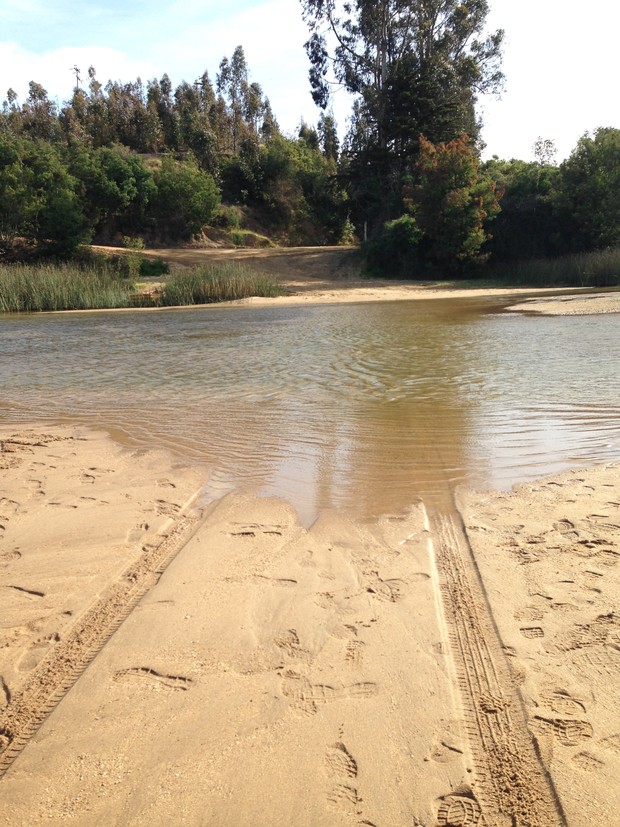