CHAPTER 1: A Skier/Surfer/Sailor/Kiter Starts to REALLY Study the Sky

For as long as I can remember I've been curious about the weather, passionate about climate change, pissed off about pollution, feeling guilty about my own CO2 emissions, and a lover of the natural world, mountains, the ocean, beautiful women, and The Truth. I named my blog "OilFreeFun" because I know we cannot go on fighting for oil, wasting it frivolously, and polluting the planet.
In January of the record-setting snowy winter of 2010/2011 I got burned out and needed a big change of scenery. Jackson Hole had been getting dumped on since early October, and I'd already logged 45 days of backcountry skiing in the Tetons. My joints hurt, my stoke was low, and my poor diet had me suffering from something like Chronic Fatigue. It was time for a break from the mountains, and I was looking for a place with fresh, affordable, healthy food.
I took a job out in California's Wine Country working as Assistant to a widely-published and well-respected Investigative Journalist and switched my recreational focus from backcountry skiing to surfing and kitesurfing.

It was my first time working a *real* office job. The subject matter and work load were very stressful. Most of my time was spent researching the seedier side of modern politics, economics, war, energy issues, the Fukushima disaster and other environmental concerns like climate change. I spent 50-60 hours a week in front of my computer scanning the news and trying to grasp the "Big Picture" but that didn't keep me from surfing or kiting almost every day.
Living and working in a rural area a few hours North of San Francisco and ten minutes from several decent surf breaks had me up with the sun and headed to the coast regardless of conditions or the depressing topics I'd read about the day before. My daily commute to the sea was via a thin, winding farm road high on a grassy ridge occupied by some of the happiest cattle on the planet. This road offered incredible views of both the sea and the sky as it descended 1500' to the rocky coastline below. Both sunrises and sunsets were equally spectacular on this road, so I witnessed one or the other from that ridge every day I could.

I knew about cloud seeding from books by the writer Kurt Vonnegut, Jr. He often wrote about his brother Bernard Vonnegut, one of the researchers at General Electric who developed silver iodide cloud seeding in the 1940's. I knew that this technology was used in a limited capacity to augment precipitation throughout North America, but it had never occurred to me that more advanced weather modification technologies could have been developed or implemented. 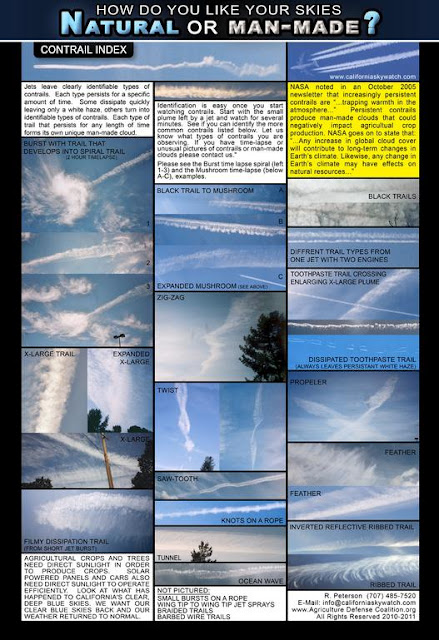 While researching current events online at my apprenticeship I inevitably went deep down the rabbit hole of conspiracy theories and summarily debunked most that I encountered. Much of the information on the internet is not true, or at least not the whole truth, so anyone searching for the actual Truth must be both skeptical and open-minded. The same critial discernment applies to both mainstream and alternative media sites.
When I first came across the "chemtrail" and "HAARP" conspiracy theories I immediately dismissed them as disinformation and nonsense. It seemed so impossible to me that someone would try to modify the climate or that they would spray toxic chemicals out of airplanes and zap the atmosphere with wireless energy to achieve that goal.
Then one day at the local grocery store I stumbled across a poster from the Agriculture Defense Coalition that identified several different types of "persistent jet contrails". The poster really caught my attention with the following quote:
NASA noted in an October 2005 newsletter that increasingly persistent contrails are "...trapping heat in the atmosphere...". Persistent contrails produce man-made clouds that could negatively impact agricultural crop production. NASA goes on to state that: "... Any increase in global cloud cover will contribute to long-term changes in Earth's climate. Likewise, any changes to Earth's climate may have effects on natural resources..."
This quote really grabbed my attention, so I grabbed the poster and put it to good use. From that day forward any time I drove that ridgetop road to the coast I paid close attention to what I saw in the sky and compared it with the identification chart I had handy. It only took a couple of days of studying the sky before I realized that there was something funny going on up there.
First off, I noticed that some planes would leave quickly disappearing contrails while other planes left long, lingering trails that spread out and formed clouds. I also noticed that some planes would leave trails that started and stopped very abruptly as if someone or something had hit a switch. 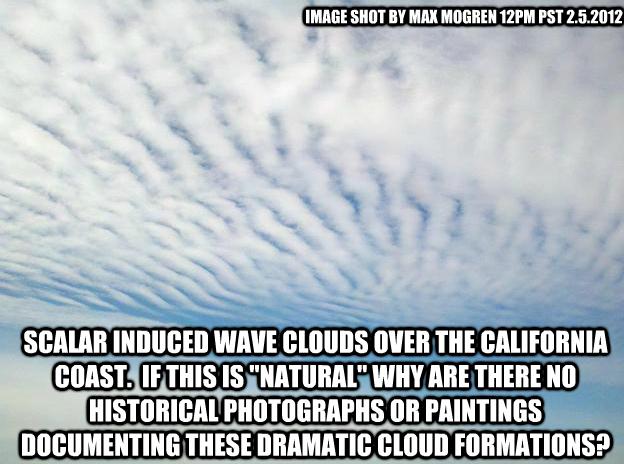 I started taking time-stamped pictures of all planes regardless of whether they were leaving lingering or quickly dissipating trails. I compared those time-stamped pictures and my field notes with aircraft traffic records accessible at PlaneFinder.net. I discovered several things through this research: 1) some commercial planes left persistent trails while others flying at the exact same altitude within a matter of minutes left quickly dissipating trails; 2) many of the planes leaving persistent trails were unmarked, unlisted on PlaneFinder.net, and totally untrackable, aka military planes or private planes contracted into military service.
I noticed that some days when the weather forecast was for clear skies, it would dawn bright blue and beautiful but then planes would leave lingering trails that spread out and eventually filled the sky with an unusual high haze. I also noticed strange repeating wave patterns in the sky, and started to wonder why I'd never seen old photographs or paintings depicting clouds like that. Surely someone like the landscape photographer Ansel Adams or any of history's famous painters would have been impressed by cloud formations like this, and somebody would have incorporated these skyscapes into their artwork. How could these clouds be natural if they were only a recent phenomenon? 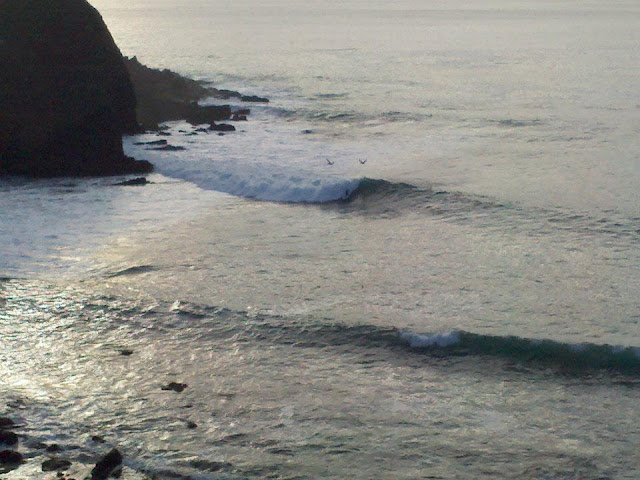 I still remember vividly the day I became a full-fledged chemtrail conspiracy theorist (gasp!) because it was one of the best days of surf I had in California. It was February 2nd, 2012 and the morning dawned bright blue, cloudless, windless, and beautiful. There was a solid swell in the water so I headed up the coast to one of the "secret" point breaks and got down to business with the few other surfers lucky enough to be there. The Jet Stream was hundreds of miles to our North, and we enjoyed unseasonably warm temperatures, zero wind, and waves well overhead.
As I waited for waves I saw planes leaving unusual trails and obvious repeating wave cloud patterns forming in what had been a beautiful blue sky. I mentioned it to a few of the other surfers in the water. One of them knew all about Geo-Engineering and was happy to share his thoughts on the subject.
After a few hours in the cold water I was surfed out so I climbed up the cliff, got out of my suit, and enjoyed a beer with a few friends who were equally exhausted. As we lay in the grass a relatively low jet flew right overhead leaving a massive, spreading trail. I pointed it out to my friends and said, "Watch this. I'll bet you anything that we see him shut that shit off." Sure enough, just after passing directly overhead the jet's trail abruptly cut out entirely for 25-30 seconds before abruptly resuming and continuing off to the horizon. 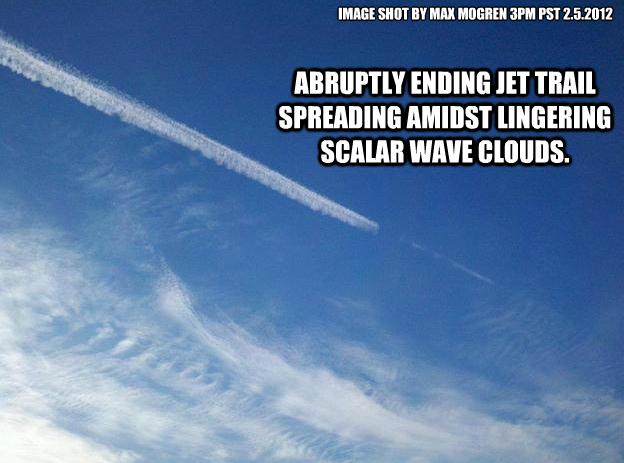 My friends were immediately intrigued so I shared with them everything I knew on the topic. They expressed skeptical interest and I expressed skeptical belief that something strange was going on with the weather. A few minutes later the last three surfers came clamoring up the cliffs because they'd seen a large shark fin just outside the lineup. I remember thinking to myself, "What should I be more concerned about? Sharks in the water or spray in the sky?!"
The waves were so good that a few of us decided to camp out on the cliffs in hopes of catching good surf again in the morning. We headed to a restaurant up the coast for dinner and got back to the break a few hours after dark. As we walked down the goat path from the road to the cliffs I couldn't help but notice thousands of small particles floating in the air around me, brightly illuminated by my headlamp. There was no wind whatsoever and there had been no wind all day so it surely wasn't wind whipped dust. The trail was muddy from previous rains and I was leading our group so there was no way this was dust kicked up by a friend either. There was no perceptible moisture in the air, so it certainly wasn't fog or mist. I thought to myself, "I really shouldn't be breathing this," but refused to let the Geo-Engineers ruin my camp out or surf the next morning. 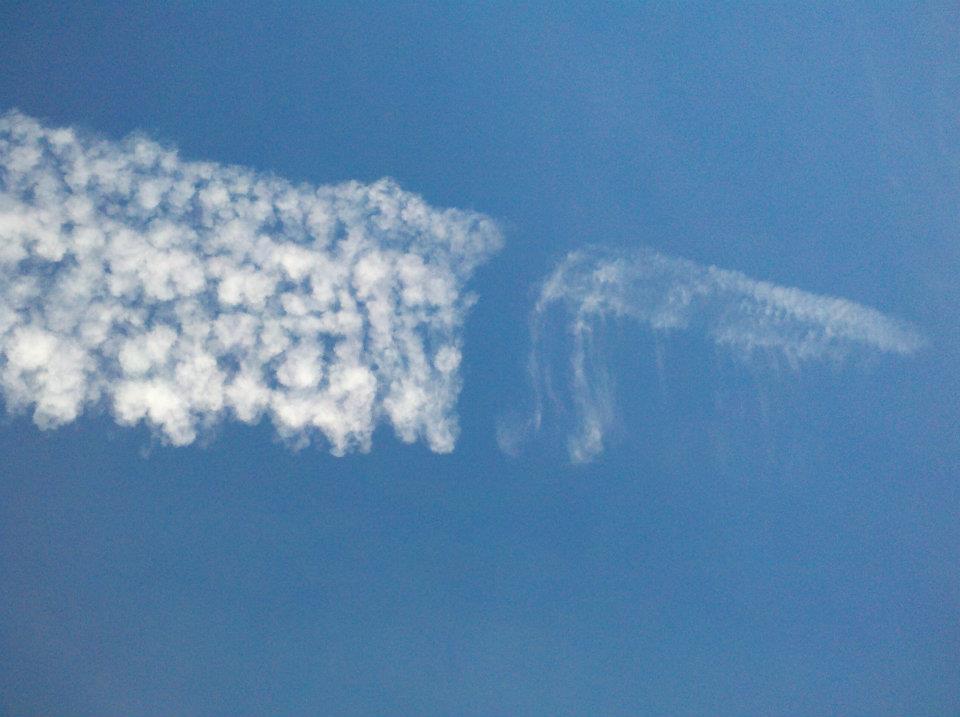 That February night on the Northern California Coast was unseasonably warm to the point where I was sweating in my lightweight sleeping bag. I lay there in jeans, socks, and a sweater on a cliff about a hundred feet above and a few hundred feet East of the frigid Pacific Ocean. I covered my face with the bag to avoid breathing the particles as much as possible. I didn't sleep very well, and several times throughout the warm and windless night I turned on my headlamp and saw the now familiar sight of tiny particles floating in the air above me. I knew these particles were not fog or mist because it was unusually dry that night. There was no dew on the grass in the morning, no fog, and no feeling of dampness whatsoever.
In the morning the surf was dead, the sky a depressing grey haze, and I felt like shit. I wasn't sure if I had a particle induced hangover or had just slept poorly. I had a horrible feeling of dread because I knew my disbelief of "chemtrails" has incorrect. I drove back home and started researching these topics whole-heartedly, and this is what I found...