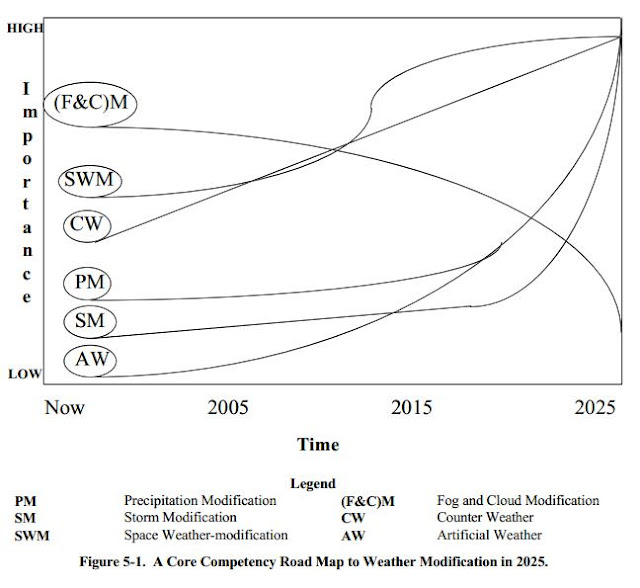 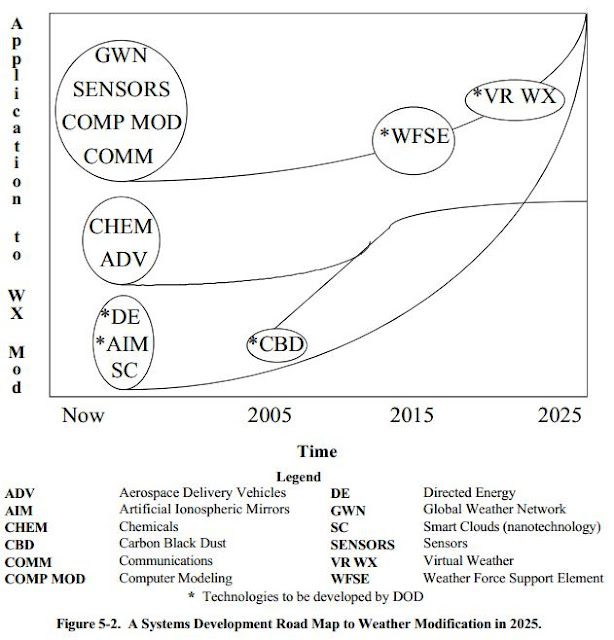 As you can see in the figures above, in 1996 the US Military was planning on incorporating "Aerospace Delivery Vehicles", "Chemicals", "Directed Energy", "Carbon Black Dust" and other technologies in their attempt to create "Artificial Weather" by the year 2025. Also note that many of the programs/technologies mentioned were already developed and forecast to gradually ramp up between 1996 and 2025. It's 2012, and if they eyes of millions of observant people around the globe can be trusted, considerable progress in the US Military's attempt to "Own The Weather" has taken place in the 16 years since the Air Force document came out.
1997: US nationwide NEXRAD radar network is fully deployed. There is considerable documentation showing that NEXRAD radars can be used to modify the weather in addition to being used to monitor the weather.
1998: Projected date for fully-operational HAARP system in Alaska.
2001: US Rep. Dennis Kucinich (D-OH) introduces bill H.R. 2977 The Space Preservation Act of 2001 in the US House. No other Reps. co-sponsored the bill. H.R. 2977 sought, "To preserve the cooperative, peaceful uses of space for the benefit of all humankind by permanently prohibiting the basing of weapons in space by the United States, and to require the President to take action to adopt and implement a world treaty banning space-based weapons."

Rep. Kuchinich's bill was never voted on as it was killed in Committees.

Hurricane Rita hits the Texas-Louisiana border coastal region in September, creating significant storm surge and wind damage along the coast, and some inland flooding. Prior to landfall, Rita reached the third lowest pressure (897 mb) ever recorded in the Atlantic basin. Rita results in an estimated $16.0 billion in damage/costs and 119 deaths — mostly indirect.

Hurricane Wilma hits southwest Florida in October, resulting in strong, damaging winds and major flooding across southeastern Florida. Prior to landfall, as a Category 5 hurricane, Wilma sets a record for the lowest pressure (882 mb) ever recorded in the Atlantic basin. Wilma results in an estimated $16.0 billion in damages/costs and 35 deaths.

Overall, the 2005 Atlantic hurricane season set several records. There were 28 named storms (storms with sustained winds of at least 39 miles per hour). In addition, there were an unprecedented 14 hurricanes, of which seven were major hurricanes (Category 3 or better on the Saffir-Simpson Scale). Three category 5 storms (sustained winds of 156 miles per hour or more) formed in the Atlantic Basin for the first time in a single season (Katrina, Rita, and Wilma). Four major hurricanes and three tropical storms made landfall in the U.S., with an eighth storm (Ophelia) brushed brushing the North Carolina coast.
Apparently decades or US research into tropical storm modification were a total failure... or is this death and destruction merely "collateral damage" in a global weather war? Many independent researchers
2006: Severe flooding occurs over portions of the Northeast in June due to several weeks of heavy rainfall, affecting six states and resulting in over $1 billion in damage/costs and at least 20 deaths.
2006-2012: Almost every country the world over is seeing increasingly frequent and extreme weather events, many of which have been record-breaking. The mainstream media repeatedly blames green house gas emissions as the culprit while totally overlooking advanced weather modification technologies that could be used to either cause extreme weather or prevent it.
2007: For nearly two weeks in January, overnight temperatures over a good portion of California dipped into the 20's, destroying numerous agricultural crops; with citrus, berry, and vegetable crops most affected. An estimated $14 billion in damage/costs are reported.

The Super Tuesday Tornado Outbreak of February 5-6 results in 57 fatalities in four states. It is the second largest February tornado outbreak since 1950 in terms of fatalities and the largest since May 31, 1985.
2009: Operation HAMP – Department of Homeland Security operation to Modify and Steer Hurricanes with Geoengineering Aerosols.
2009: Truth Media Productions releases documentary film "What In The World Are They Spraying?" exposing Geoengineering. Millions of people around the world have watched this film and it's sequel "Why In The World Are They Spraying?"
2009: Drought conditions occurred during much of the year across parts of the Southwest, Great Plains, and southern Texas causing an estimated $5 billion in agricultural losses in numerous states. The largest agriculture losses occurred in Texas and California.

NWS completed implementation of the final phase of a nine-year, $180 million contract by installing the newest generation of IBM supercomputers for weather and climate prediction. The new supercomputers, based on IBM Power 575 Systems, are four times faster than the previous system, with the ability to make 69.7 trillion calculations per second. Higher computation speed allows meteorologists to rapidly refine and update severe weather forecasts as dangerous weather develops and threatens U.S. communities.

Devastating floods affect the southeast U.S., as copious moisture drawn into the region from the Atlantic and Gulf of Mexico produced showers and thunderstorms from September 18-23. Rainfall amounts across the region totaled 5-7 inches, with locally higher amounts near 20 inches. Flash flood and areal flooding were widespread, with 11 fatalities directly attributed to this flooding.
2010: Geoengineer, David Keith (AAAS Meeting) proposal to use jet aircraft to spray Sulfur dioxide and aluminum nano-particles into the atmosphere to reflect sunlight back into space.
2010: UN Convention on Biodiversity appears to ban any future efforts to "geoengineer" the planet. But did it? And why was the decision made at the UN's biodiversity meeting in Nagoya, Japan, rather than at the following month's climate conference in Mexico? The resolution is worded in a way that placed a moratorium on geoengineering only if it might affect biodiversity. The 193 signatories to the convention agreed to outlaw such geoengineering projects "until there is an adequate scientific basis on which to justify such activities and appropriate consideration of the associated risks for the environment and biodiversity and associated social, economic and cultural impacts". The agreement exempts "small-scale scientific research studies".
2011: Record-breaking disasters in the US with 10 separate weather, water and climate disasters with an economic loss of $1 billion or more. These included the Groundhog Day Blizzard of Jan 29-Feb 3, several devastating tornado outbreaks — including the one that produced an EF-5 tornado struck Joplin, Mo., which resulted in at least 160 deaths, making it the deadliest single tornado to strike the U.S. since modern tornado record keeping began in 1950 — and river flooding along the Mississippi, Missouri and Souris Rivers. Hurricane Irene makes landfall over coastal N.C. before moving northward along the Mid-Atlantic Coast and causing torrential rainfall and flooding across the Northeast. More than seven million homes and businesses lost power during the storm. Numerous tornadoes were also reported in several states further adding to the damage. Over $7.0 billion in damages/costs; and at least 45 deaths were reported. NWS launches a comprehensive initiative to build a Weather-Ready Nation to make America safer as communities across the country become increasingly vulnerable to severe weather events, such as tornado outbreaks, intense heat waves, flooding, hurricanes, and solar storms that threaten electrical and communication systems.
2012: Truth Media Productions releases documentary film "Why In The World Are They Spraying?" exposing the environmental and health consequences of Geoengineering. Critically-acclaimed documentary wins awards at the All Things Hollywood and Off The Radar Film Festivals.
2012: Record breaking drought persists across much of the United States. Numerous independent researchers note that ongoing aerosol spray programs can inhibit rainfall through several mechanisms. 1) artificially induced high cloud cover decreases evaporation over the ocean, decreasing the amount of water vapor in the atmosphere available to fall as rain; 2) aerosol spray programs introduce an unnaturally large number of cloud condensation nuclei into the atmosphere. When there are "too many" cloud condensation nuclei the individaul droplets formed are less likely to acquire sufficient mass to fall as rain.