In this week's episode, Bezanson unpacks and sets up his new Trek Ticket S slope style bike. Having never ridden a slope style bike, it took him some time to get used to the new set-up. The two most noticeable differences for Drew were the added dual suspension and the 26er wheel size. On top of this, it took him a day to decide what PSI he preferred in the front and rear shocks.

His initial jump into the FMB tour began on the other side of the world in New Zealand. Rotorua is host to the Crankworx Slopestyle Diamond event, one of the highest stakes stops on the world tour. Drew was merely a spectator at this one, but it helped him to truly grasp the magnitude of tricks that the leaders are pulling in the slope style specialization. In order to qualify for Red Bull Joy Ride, Bezanson needs to acquire the magic number 1150 points through competitions on the tour, problem being, he has to take points from others on the tour, even the leaders in the industry that are already qualified. 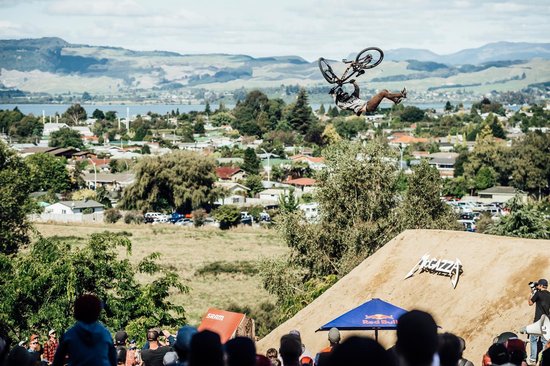 As he knows that he has an uphill battle, Drew took a few preview laps on "The best course the slope style tour has ever seen" before heading home. After feeling out his bike and discovering the nuances between landing tricks on dirt ramps with a full suspension set up and his BMX. Bezanson is gradually getting into the swing of things and is looking to start competing on tour in the next episode of "The Learning Curve"