Just as I thought winter was coming to an end, rumors of a big spring storm started to circulate. Only a day earlier we were rafting with a friend who guides down at the Royal Gorge, enjoying some 90 degree weather. Swim trunks and sandals unpacked, and the smell of sunscreen had now replaced that of IcyHot. 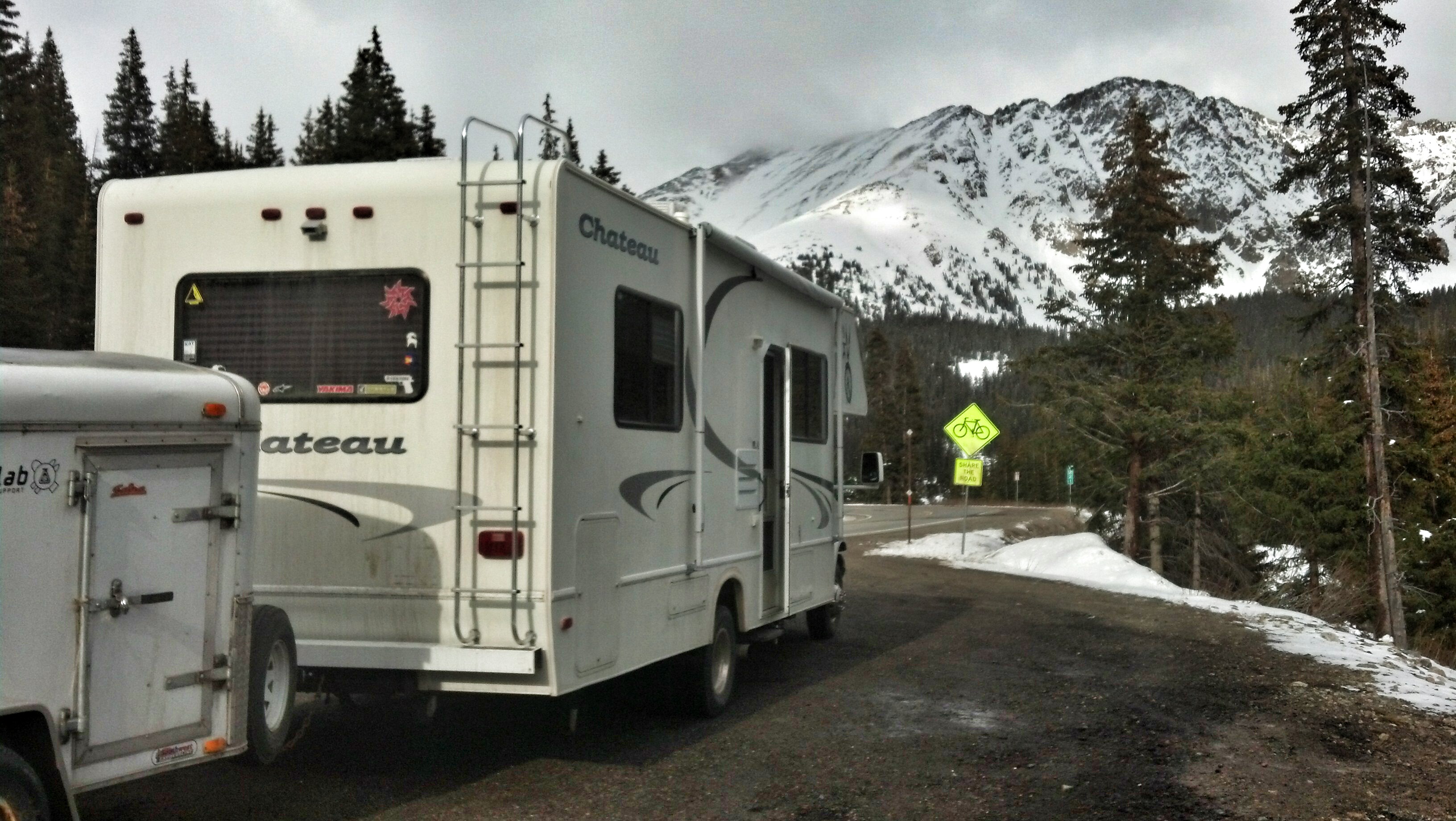 I decided I couldn't miss this storm. Originally, I planned to head to Moab to kick off the bike season, but put that on hold. With snow predictions measured in feet, it was an obvious choice.
Arapahoe Basin is the only resort of the 35 in Colorado still open(and will potentially be open through July with the snow totals). Located about 20 minutes from Breckenridge, we rounded up the crew and headed up to A-Basin to camp and get first tracks on this killer storm. 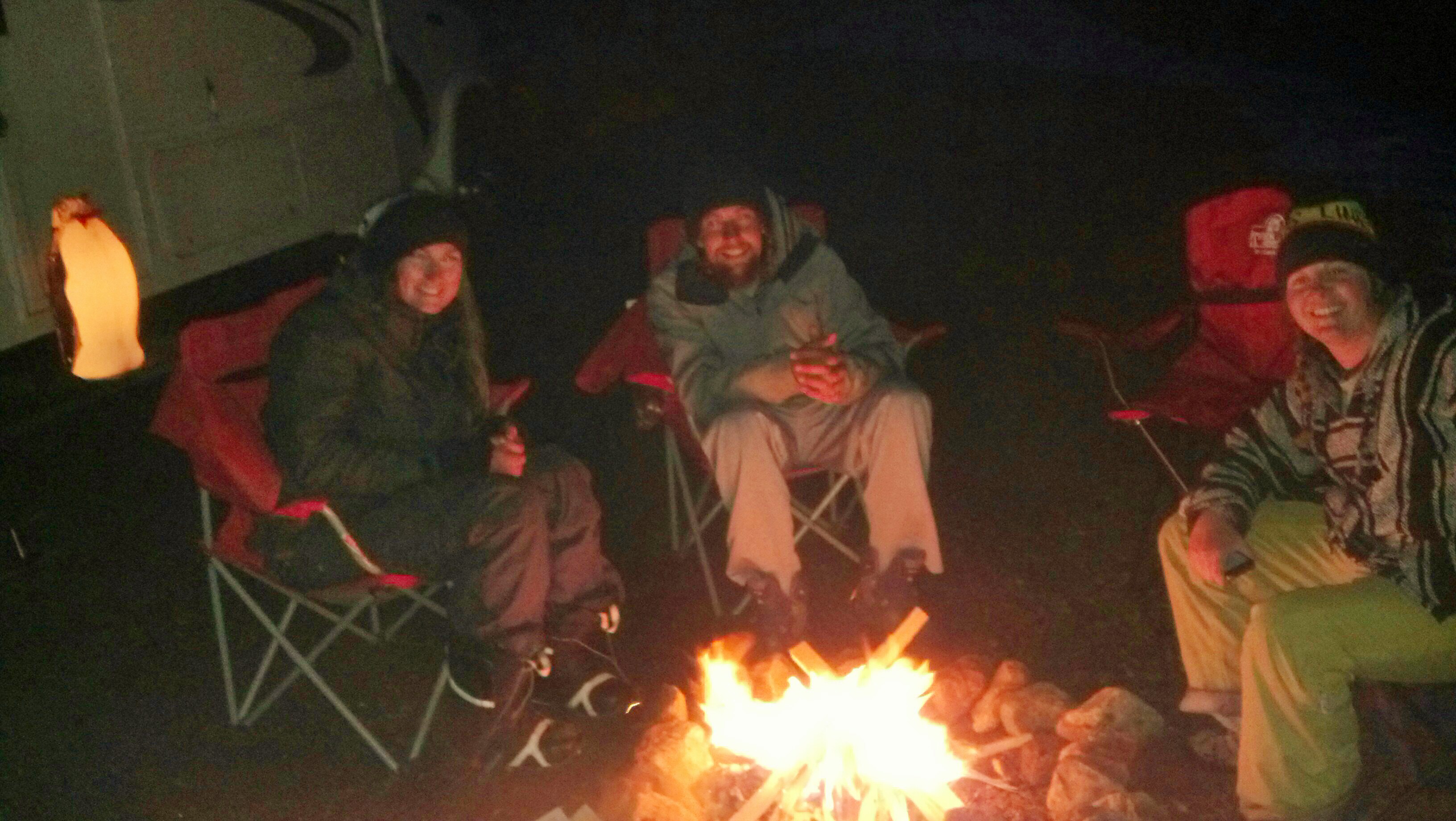 We woke up Sunday morning to no snow. A-Basin reported a few inches but nothing to write home about. Somewhat discouraged, we headed up the road from camp to claim a spot on "The Beach". It is essentially a beach party, except, its snow, not sand. With kegs, shot-skis, grills, and yard games, it has that awesome small mountain vibe. 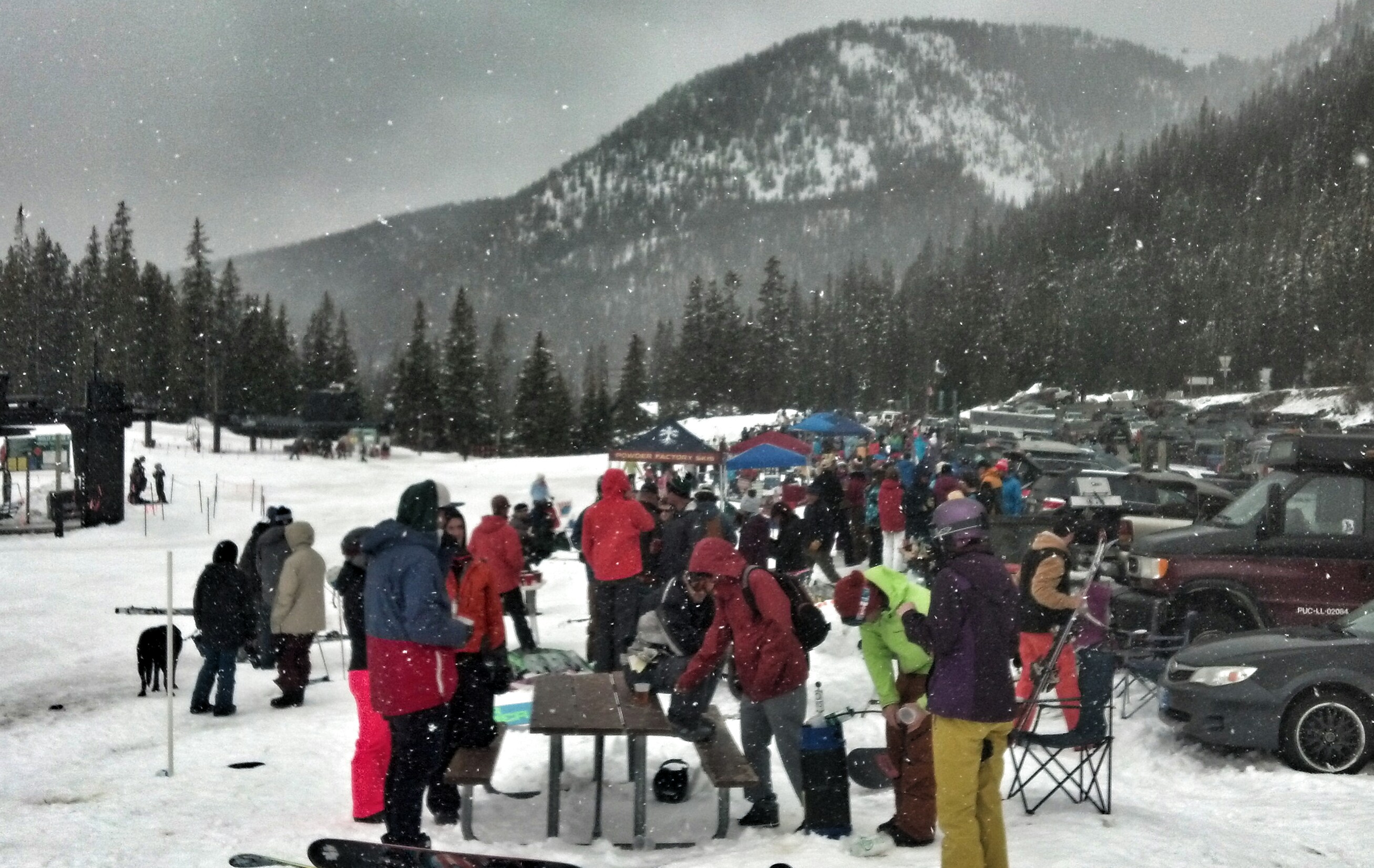 By the time I convinced the parking lot patrol to let me park a 30 foot RV and trailer on the beach it started to nuke.
Some of us still nursing sunburn(me particularly) from earlier in the week, we donned our winter gear, headed through the beach, and to the lift. 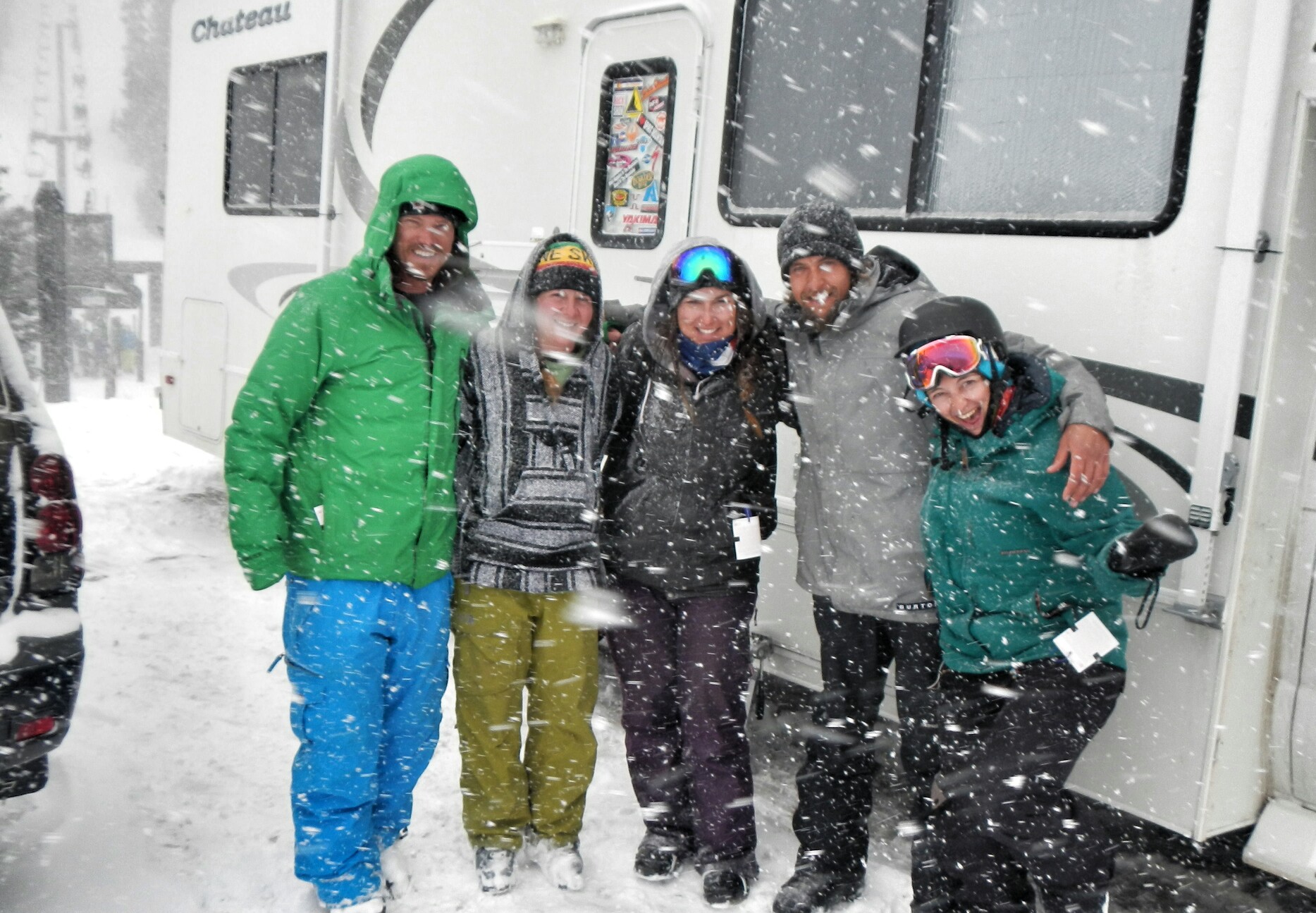 The snow stacked up quick, with some reports reaching 2 inches an hour. With only a handful of people on the mountain, lifts lines were non existent, and the powder turns were endless.
The weather came in fast and hard. The conditions were more like mid January. High winds, low visibility, and bottomless skiing. I think the quote of the weekend was "I can't believe its May!" And that wasn't just within our group, it floated through the parking lot, on the chair lifts. We even had someone pull up next to us at The Betty, roll down his window, and say, "Can you believe its May?!" then drive off to our cheers of this observation. 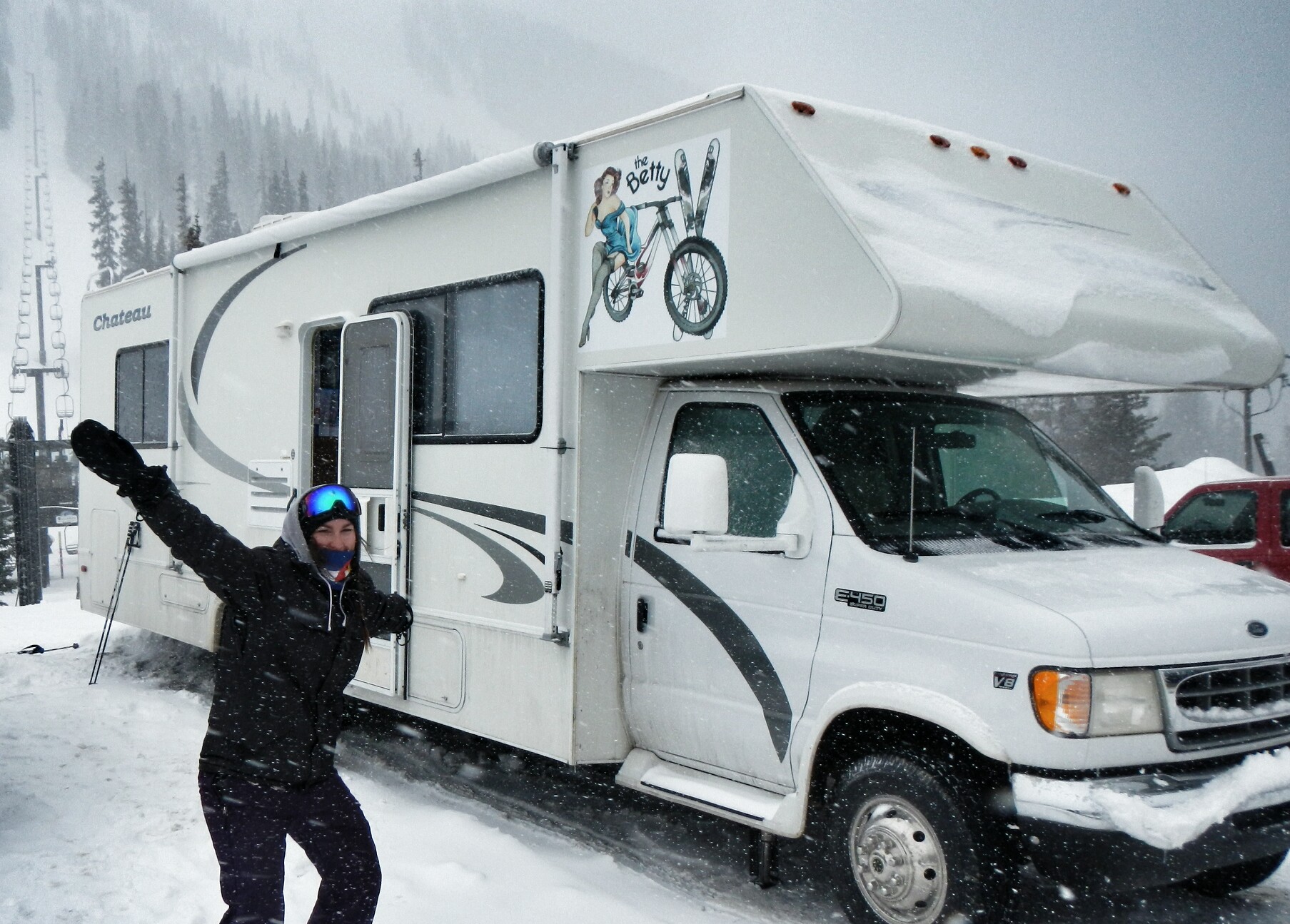 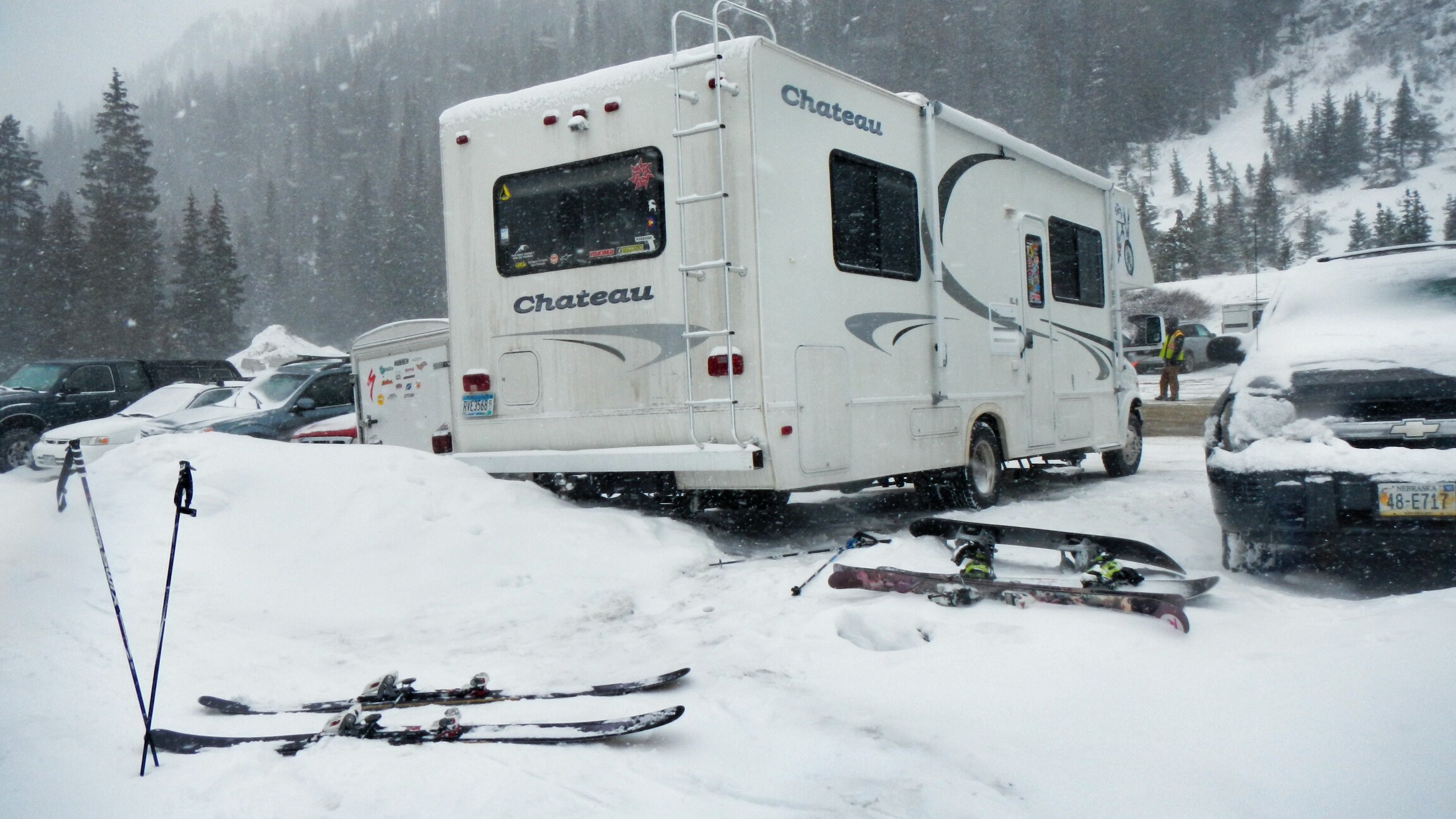 Along with the storm came a cold front. The first night was not too bad sleeping in The Betty. The second night, the bottom fell out, hitting single digit temps. We really weren't expecting temps that low, I mean, hey, its May! Either way we survived and headed out to round 2. Monday brought clear skies and warmer temps. It also brought the crowds. The local snow forecasts had been saying all week that Monday was the day for powder. It looked liked half of the front range had played hooky from work and headed to the mountains. The storm prediction was a little off though, dropping a foot on Sunday(some parts of CO did report 36"), then clearing for Monday. Yet another benefit to storm chasing in an RV. 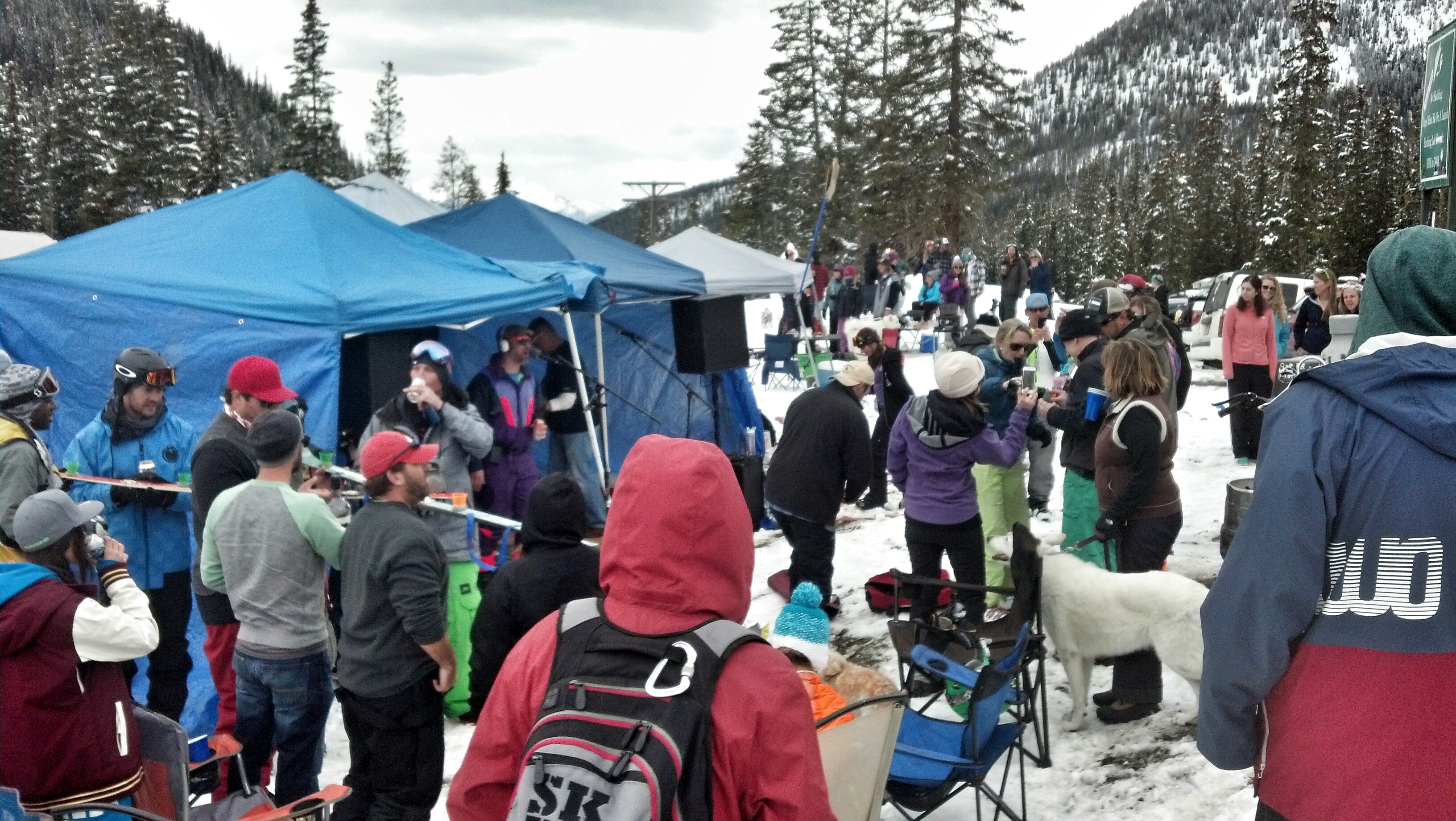 Once the realization that they missed the powder day, the crowds died off and the lift lines disappeared. We spent the day getting an instant goggle tan in Montazuma Bowl and hanging at the RV.
Wishing I could ski these conditions forever, the fact the Angel Fire Bike Park opening was only 3 days away convinced me that it was time to pack up and get on with summer. 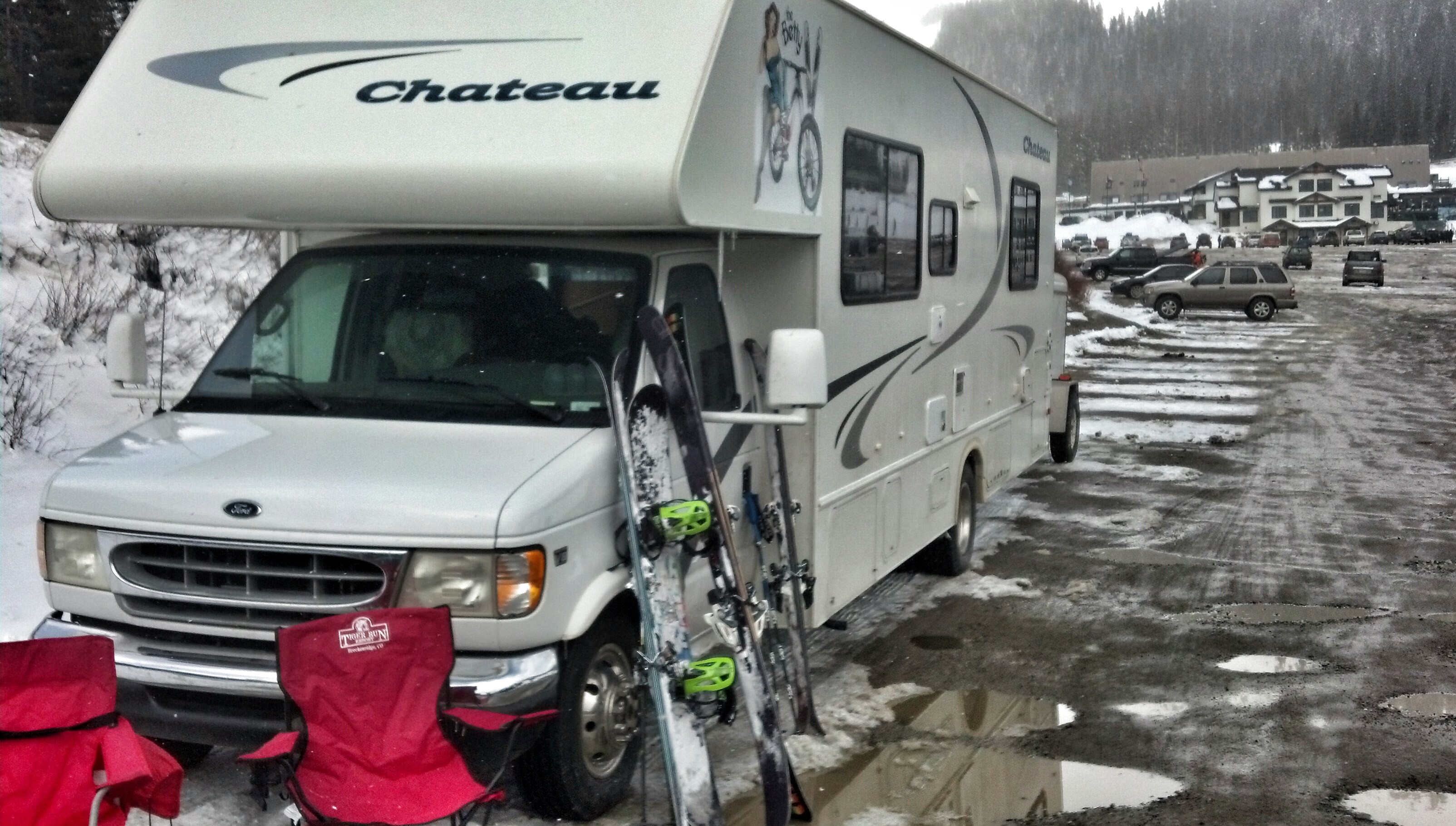 For more adventures with The Betty head over to Miles in the Mirror for storoes of ski bumming in Breckenridge and chasing downhill bike parks this summer!