Experiencing A Special Taste of Winter in Quebec 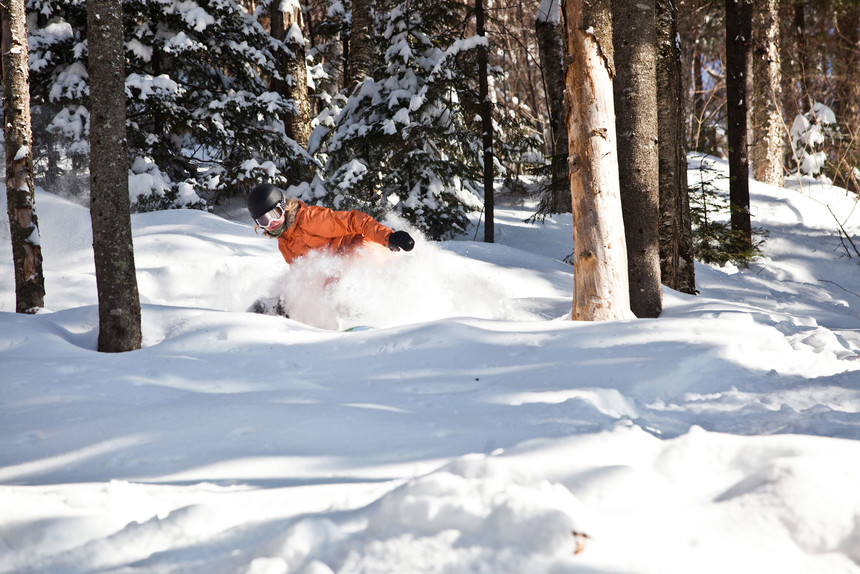 Québec City is actually kind of a dangerous home base for a ski trip. On the plus side, it’s within easy reach of three ski areas on a single lift ticket—Stoneham, Mont-Sainte-Anne, and Massif de Charlevoix—each appealing in its own way, each reflecting a Québecois sensibility that’ll appeal to an American traveler in search of something different. On the minus side, Canada’s oldest city is so cool you’ll wish you booked more time to explore its history, vibrant culture, and, of course, exceptional food.

First the skiing, starting with the two ski areas closest to the city, Stoneham (about 20 minutes away) and Mont-Sainte-Anne (30 minutes away), both of which are owned by the same company, Resorts of the Canadian Rockies (owners of Fernie and Kicking Horse, B.C., among others).

To reach Stoneham, head north and inland from the St. Lawrence River, into the rolling, New England-like hills of the Laurentians. And here’s a suggestion: Do it at night. Stoneham isn’t big—its slopes surround a central base area, offering 1,132 feet of vert, and they’re mellow, ideal for waking up your ski legs after the long drive up from the States (Québec City is about nine hours from New York City). Night-skiers know that there’s a fun, giddy vibe that comes with stealing some turns after the sun goes down, and that normal cruising speed just feels a little more exciting under the lights. And if you’re ready to get after it, hit the terrain parks. Stoneham, the childhood home hill of the late JP Auclair, works hard to please the freestyle crowd, with three terrain parks for different skills levels, plus, right there in the middle of everything, is a Olympic-standard halfpipe. Come here on the right day, and you might catch one of the freestyle comps Stoneham hosts annually. 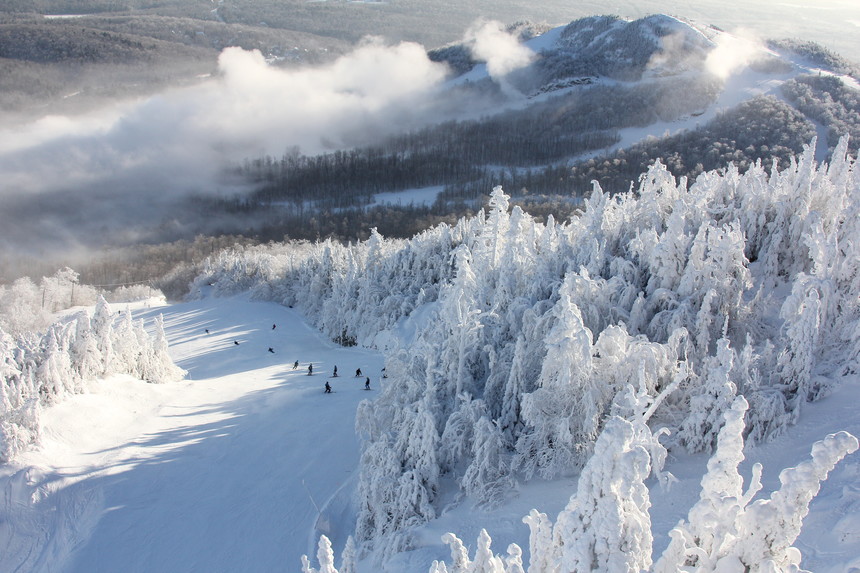 A frosty day at Mont-Orford. A. Daniel photo.

Mont-Sainte-Anne lies about a half hour east and downstream from the city, and it’s a bit bigger (2,051 vert, 450 acres). Like Stoneham, it has varied and expansive parks and features, but freeskiers will be as happy as freestylers here. The terrain is as long and challenging as that found in Vermont resorts. Decide for yourself after a run on Beauty and the Beast (La Belle et La Bête)—a top-to-bottom run with trees up top and steep bumps below. From the summit, you get great views of the river, and Saint-Anne is famous for taking advantage of the chilly Québec climate to make lots of early-season snow. That makes it a favorite of New England racers looking for November training opportunities.

As for views of the river, though, nothing beats Le Massif de Charlevoix. To get to Le Massif, keep going east and downstream along the north bank of the river, about an hour from Québec City, to where the north bank of the river rises steeply from the water. You’ll want to take this trip during the day, as the Charlevoix region is known for its beautiful landscapes—it’s shaped by a meteorite impact and is one of the few inhabited craters on the planet. Baie-Saint-Paul is a worth a stroll through—its sidewalks are lined with art galleries and top-notch restaurants.

The first time I saw Le Massif’s famous view I almost wiped out. It was a snowy day, and Le Massif is one of those upside-down ski areas—park your car at the top, boot up in the summit lodge, and begin your day by going down rather than up—so it wasn’t until about halfway down that I skied out of the clouds and got my first startling glimpse of the river. 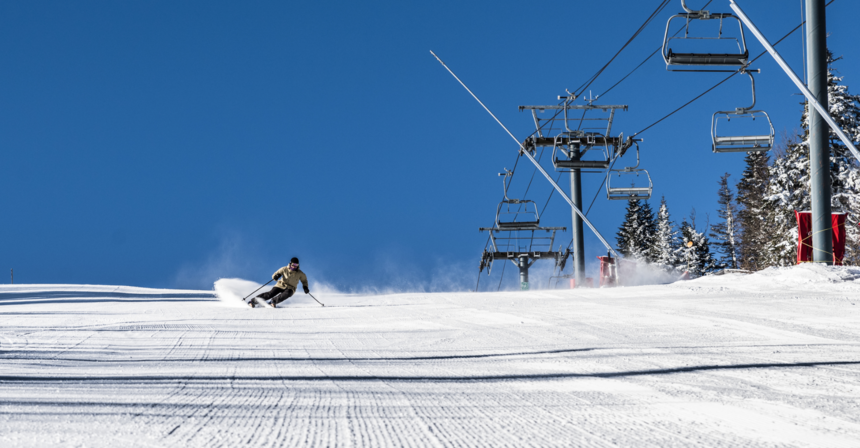 The St. Lawrence broadens to about 15 miles here and turns to salt water, looking very much ocean-like, complete with enormous freighters making their way through ice-floed waters. Le Massif, with its 2,526-foot vert, the highest drop east of the Rockies, skis like a big mountain anywhere—including some killer tree runs like Chaudière and even a former FIS-homologated downhill run, La Charlevoix (they trucked in fill at the top to satisfy the minimum vert). Adding to the mystique of the place, it’s owned by Daniel Gauthier, who was just another Massif ski bum before he co-founded Cirque du Soleil. The mountain bears a natural showman’s lyrical touch—tree-houses, a 4.7-mile luge run (the longest in North America), a dedication to environmental responsibility.

Tempting as it is to après slopeside, you’ll probably want to hurry back to enjoy Québec City. What’s so great about it? Well, it’s a 400-year-old city, with all the beautiful stone buildings and narrow cobbled streets you expect, crowned by the castle-like Chateau Frontenac hotel. And it drips with history. Located on its steep bank right where the river narrows to the effective range of 17th century artillery, it was early Canada’s military key to control. French defenders awoke one morning in 1759 to discover that the Brits had managed to get their well-trained infantry up the steep banks onto the Plains of Abraham, and the battle that ensued is why most of Canada today speaks English rather than French. 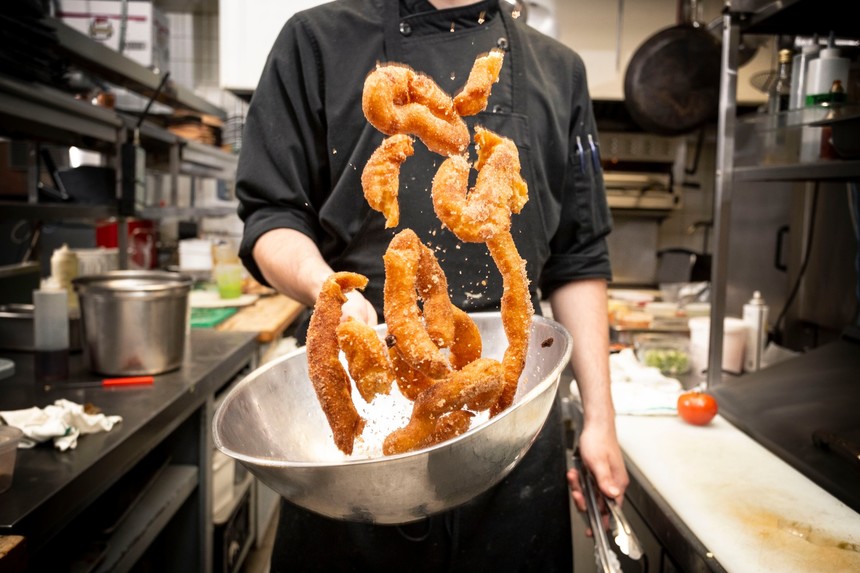 Québec City, nonetheless, remains French-speaking—an authentic French experience, yet still welcoming to English speakers. And even better than the history is the food. Extraordinary restaurant experiences abound, from humble poutine and crepes to the haute cuisine of fabled restaurants like Aux Anciens Canadiens.

Early season is a good time to schedule your Québec City ski trip, thanks to the cold weather, reliable snowmaking, and early season deals. If you plan a later visit, be aware that the city is mobbed during its famous Carnival (Feb. 1–17): Embrace it or avoid it according to your tolerance for action. Remember that U.S. holidays like MLK and President’s Week, when our resorts are busy, are usually quieter up here. And keep an eye on the exchange rate: Anything below 80 cents makes everything feel like a steal.

Above all, perhaps, remember to schedule an extra day. Then you won’t have to choose between great skiing and an enchanting city.