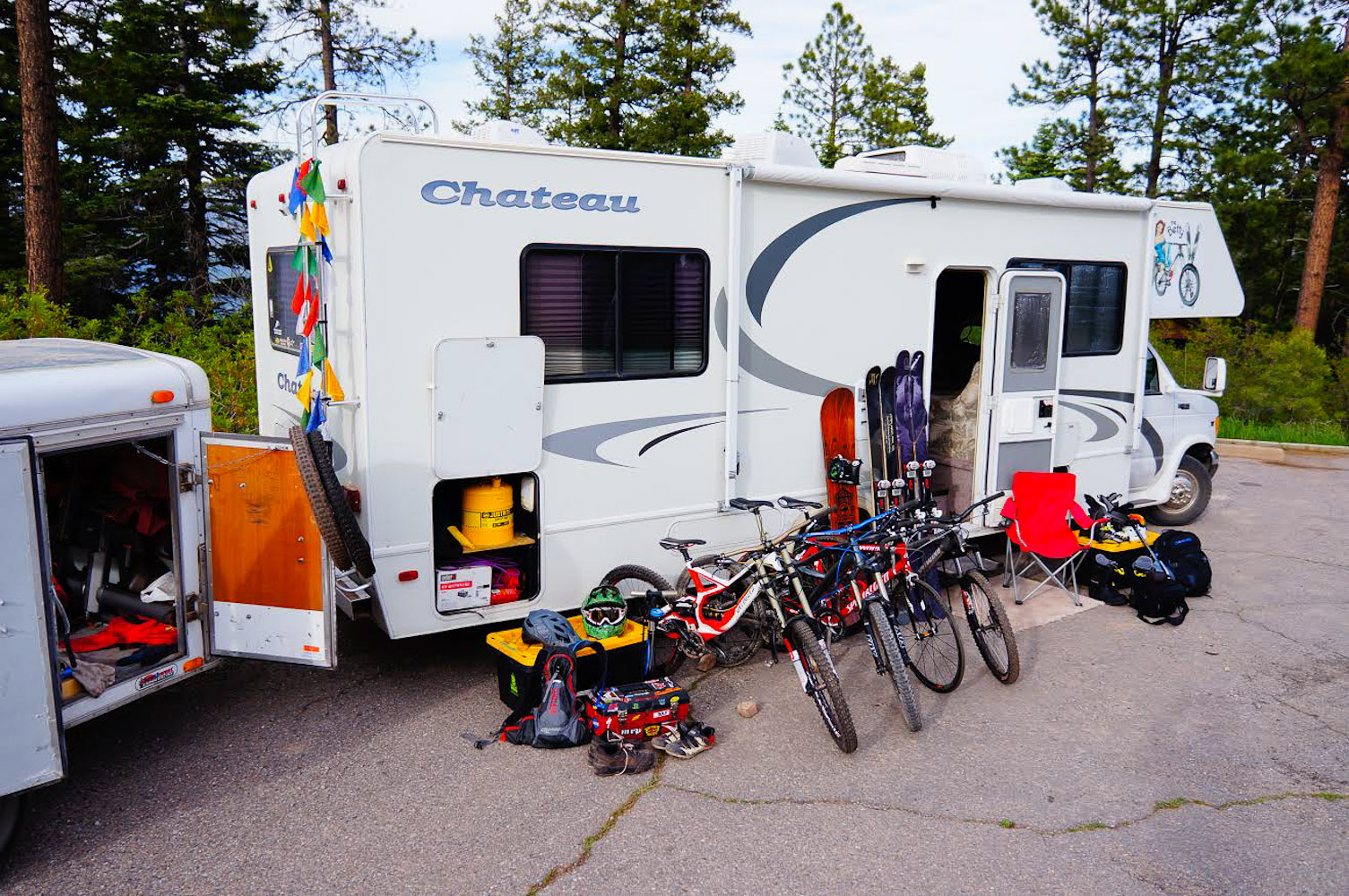 The original Betty, as profiled in TGR's Base Camp series.

As the miles started to rack up on The Betty, the challenge of finding a camping or parking spot started to wear on me. I started taking some of my own prior advice and began to think about other RV options. With over 2,000 miles covered and six weeks without ever touching a highway or hooking up to power, passing up Forest Service roads because my 35-foot RV was too big and clumsy to navigate them was beginning to be frustrating both for the fact of exploration and the opportunity for rustic camping. 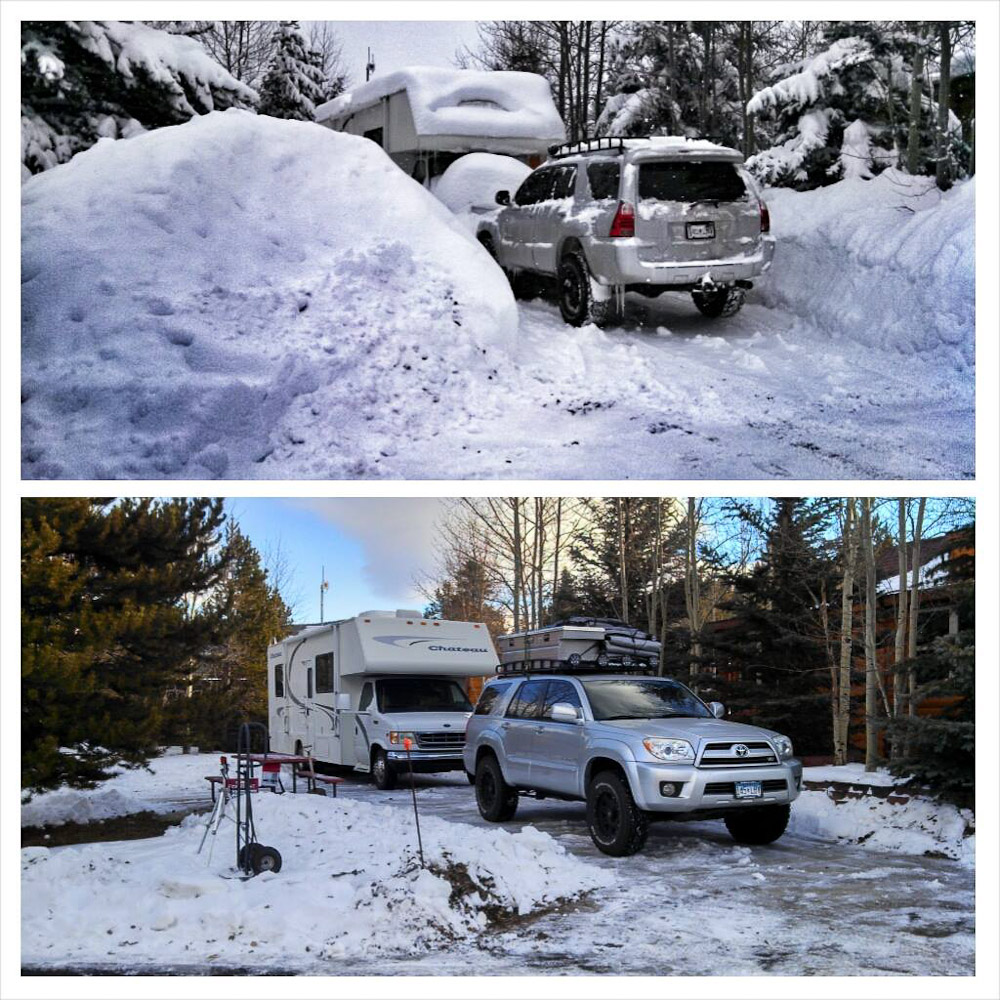 While The Betty was great for camping out during an epic winter, it was a little cumbersome for off-road exploration.

While I was parked in my lot in Breckenridge, The Betty was perfect. Large enough to weather a record winter, but without being too cramped. But as the "road" part of the trip started, I felt like it was time for a smaller and more rugged rig for getting off the pavement.

Having a more off road capable rig has always been on my mind, I mean who doesn't dream of pulling up to Red Bull Rampage in a fully decked out EarthRoamer! The majority of us don't have a cool quarter million laying around, so I decided I would assemble my own.
Once the decision was made, The Betty went up for sale on Ebay. It was a tough decision, as the RV had been trouble-free and she had been my home for the last eight months.
It sold on Ebay while I was biking in Park City to a gentleman in Tulsa, Oklahoma. We agreed to meet in Hays, Kansas to do the exchange. I was heading back to Denver to start building The Betty II, so this was only a few hours past that. 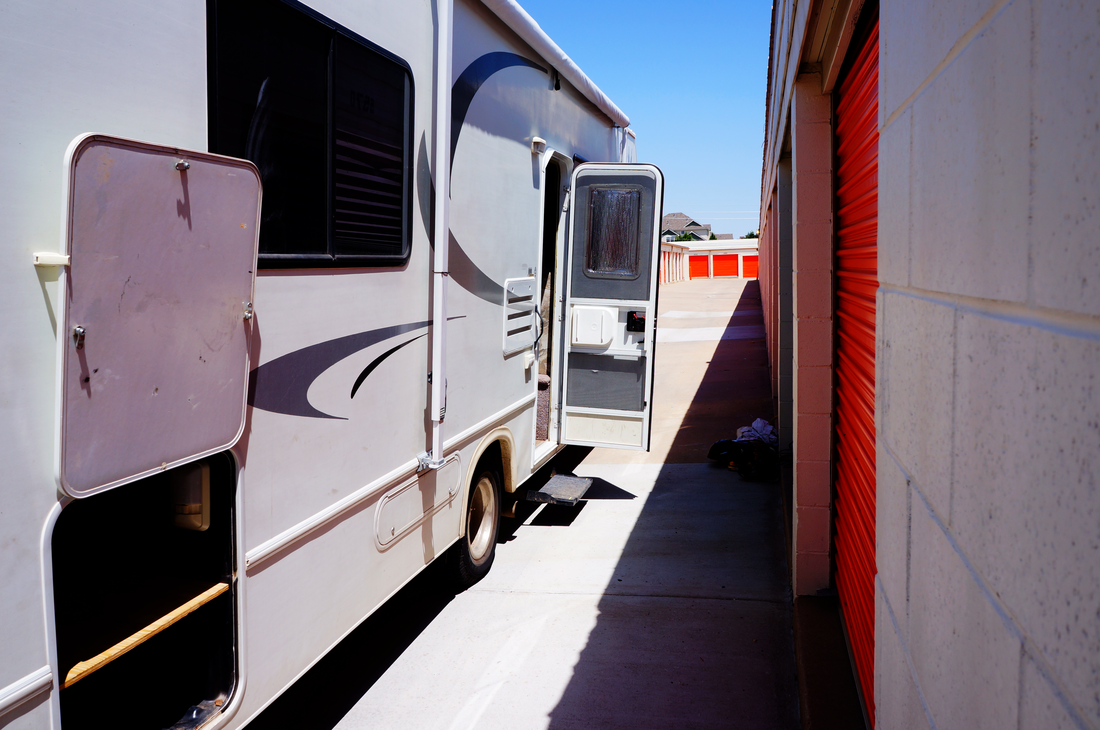 Selling it was the easy part; figuring out were I'm going to live and what to do with all my stuff in the interim was the hard part. I was going to need to lean on some of my Denver friends for this undertaking. 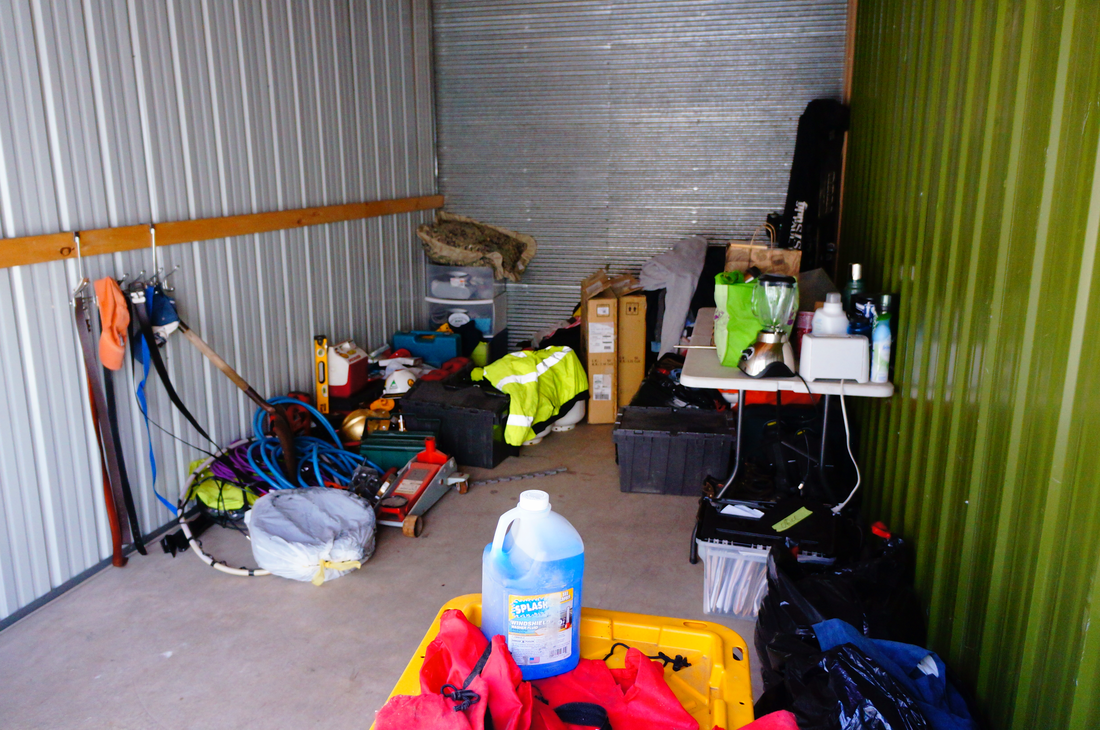 The extra space of the large unit came in very handy.

I didn't give myself much wiggle room on completing this task. I had 3 days to get from Park City, UT to Denver, unload my entire life out of the RV, then get to the middle of nowhere Kansas for delivery. I managed to find a 10x20 storage unit in Denver which at the time I though was way too much space. They were having a special, the first month was only 22 bucks! By the time I had unloaded the RV, the 200 square feet was completely full. 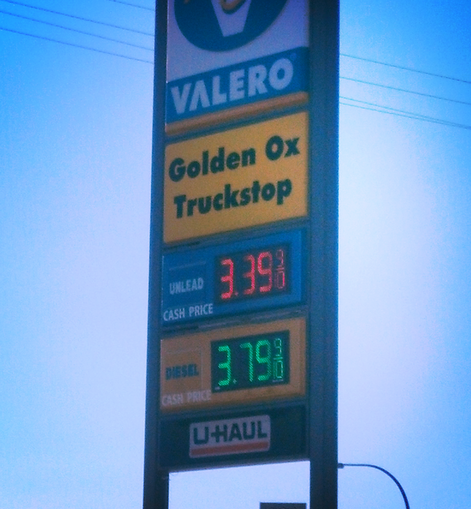 Now that she was empty, it was time to head to Kansas for delivery. It was another four or five hours to our meet-up point from Denver, so I got an early start, throwing a few things in a backpack and hitting the road. The sale went off without a hitch, and the buyer was more than happy. She went to a good home, a fellow 7.3 Liter diesel enthusiast who will appreciate her prowess.
Once the deal was done, I grabbed my backpack, did one last "over the shoulder look back," and walked off. I missed her more than I thought I would. Maybe being in a tiny town in Kansas with nothing more than a backpack made it worse. 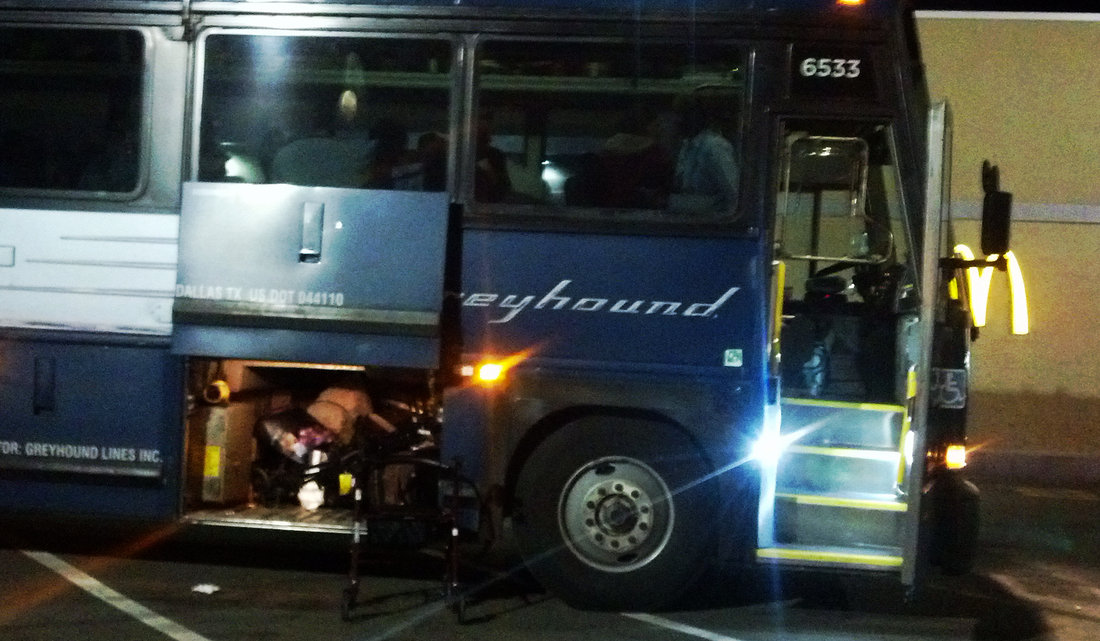 Pit stop at the Golden Arches on the way back to Denver.

I think riding a Grey Hound bus is an experience everyone should undertake. This was the mode of transportation I chose to get back to Denver. Of course, the bus was running about two hours late. Once it arrived at the Golden Ox station, it was nearly full with passengers already frustrated with the breakdown that caused the delay. The driver wasted no time loading its fresh batch of patrons, and soon we were finally Denver bound.

There was some interesting characters on the 'Hound with "bus banter" to match. It was about a six-hour trip, arriving in downtown Denver at about 2 AM. I called a cab and heading to a friends to spend what was left of the night. 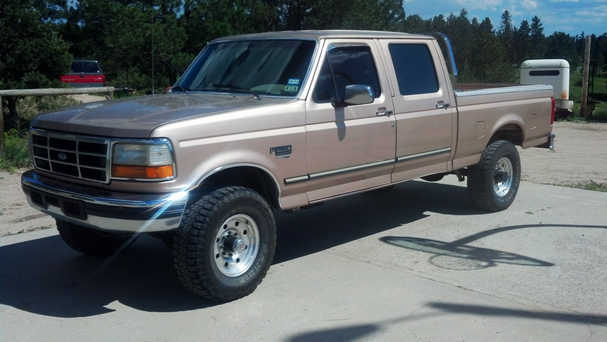 I had been shopping for the new truck once the RV went up for sale. Once back in Denver, I started calling on a handful of trucks that caught my eye. I wanted the 7.3L diesel again, in the '95-98 year range. After a couple showings and more than a few phone, calls I pulled the trigger on the new stead-a 1997 Ford F250 crew cab short bed with just under 225,000 miles on it. The miles were high, but the truck was owned by a mechanic and had spent its entire life in Texas, so I felt confident in the purchase. 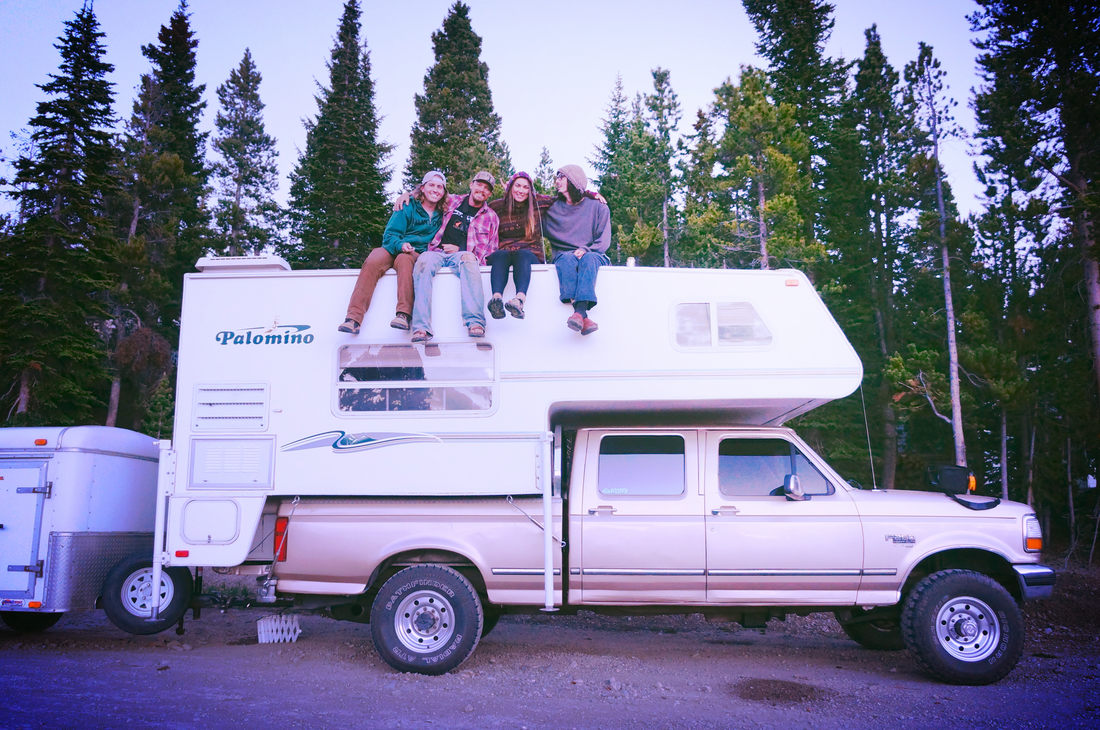 Making a pit stop in Breck with the new Betty II.

Now that the power plant was purchased, it was time for the camper. I had one already picked out, with money down, in Grand Junction. It was a 2002 Palomino 8801, a simple camper coming in at just under 9 feet tall. Once I picked up the camper in GJ, I turned around and headed back to Denver. My hangout for the next week was going to be my storage unit, repacking and getting the new expedition set up ready. 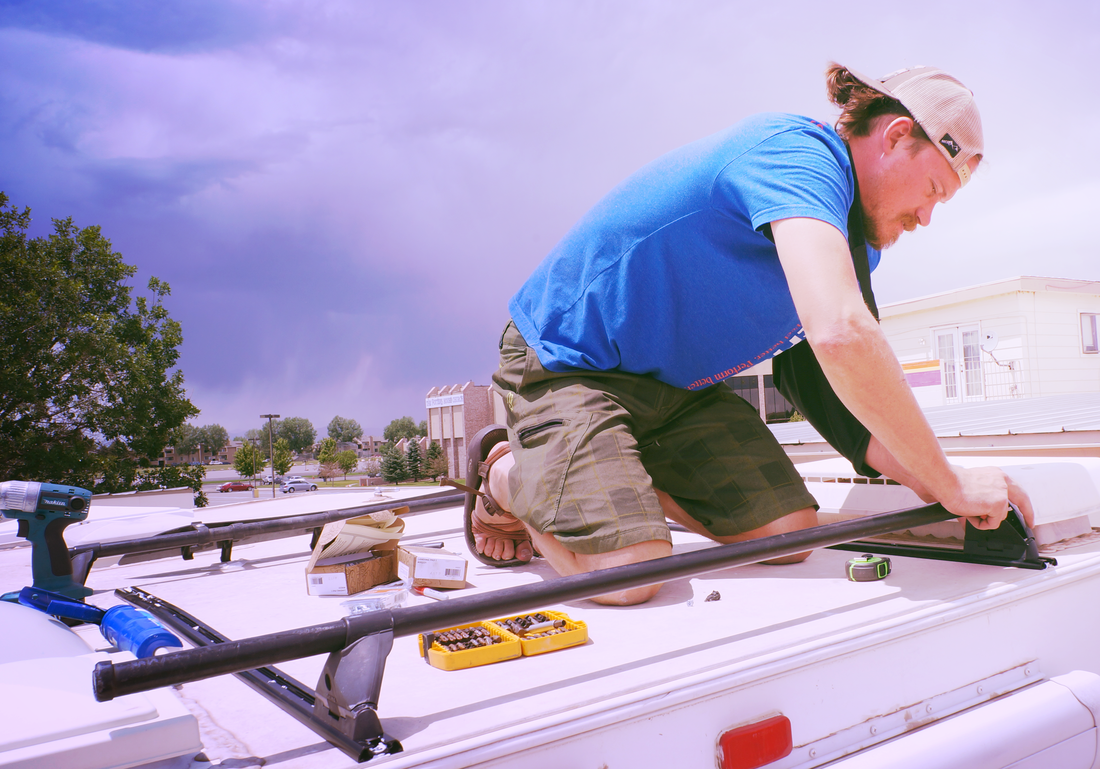 On top of the whirlwind of switching homes and the urge to be on the road, I had managed to bang up my elbow. It happened in Park City and it was a "shoulda got stitches" situation. When I finally made the call to see a doctor, they put me in a sling for a week. Not the best timing, but I made it work.
I set a timeline of 10 days from the sale of The Betty I to the maiden voyage of The Betty II. My friend Everett made the trip down from Breckenridge to help (thanks dude!). I had a list of things that I wanted to get done, mostly based on storage-related projects. First off, I needed a cargo box for the roof. I managed to find one on Craigslist for a steal. It was the biggest one that Yakima made at 31 cubic feet of storage. I filled it to the brim. 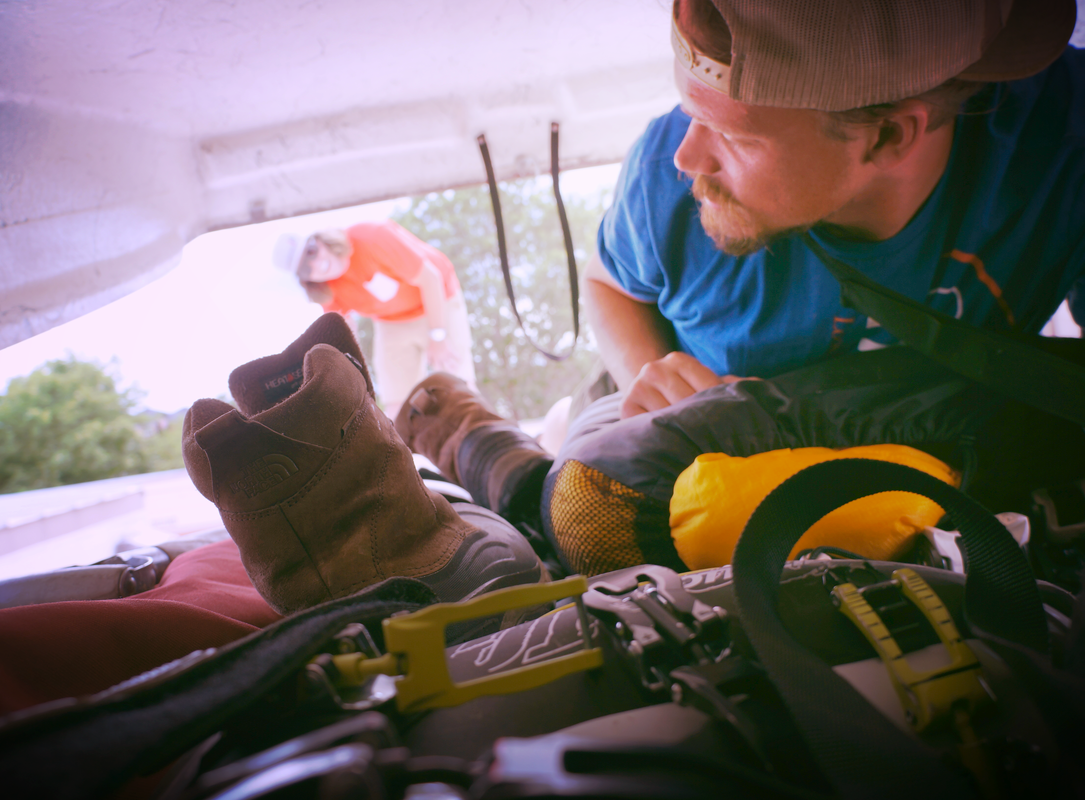 I was still scratching my head on how I was going to get all my stuff in the new rig. I had quarantined some stuff for storage, but it was still not enough. Everett had the genius idea of taking out the back seat. With the crew cab I had four full-sized doors. Problem solved! Everett pulled out the back seat while I gave advice from the sidelines with my arm in a sling. With the seat gone, I could have almost just lived there! I threw together some quick plans on a shelving system and got started. 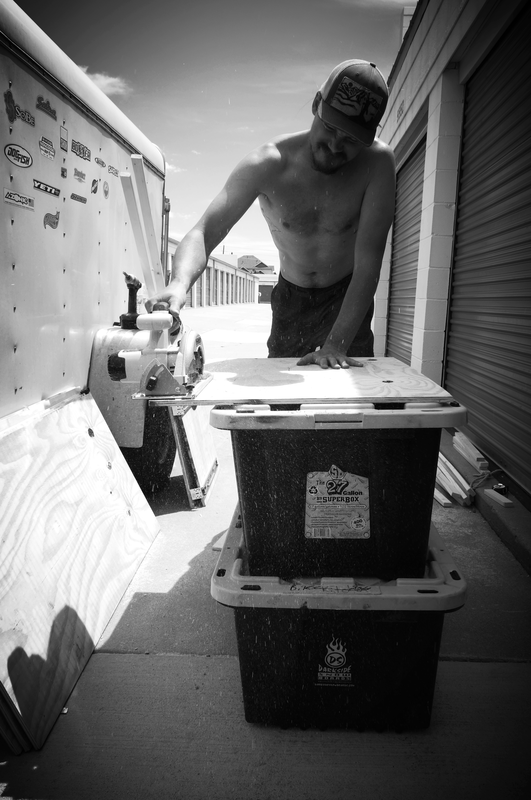 Working on the cabinets at "the shop", aka a storage unit in Denver 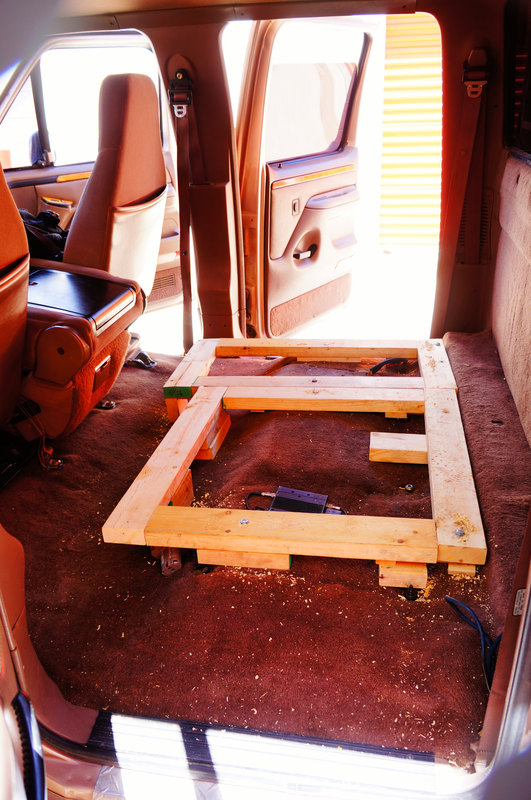 Putting together the frame for the shelving. So much room for activity-related storage! 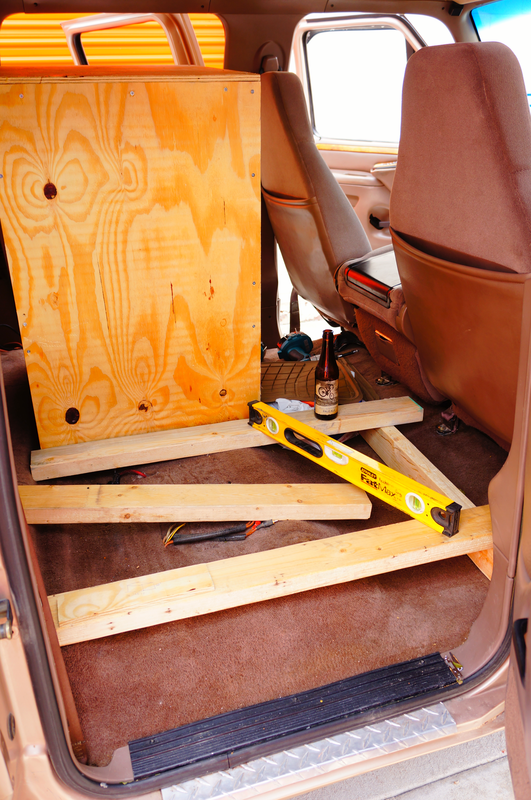 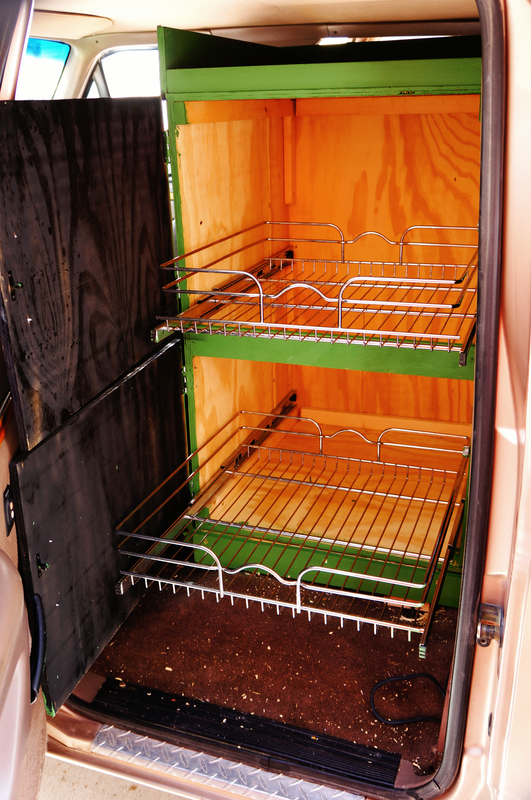 Some sweet slide out baskets from the local home improvement store. 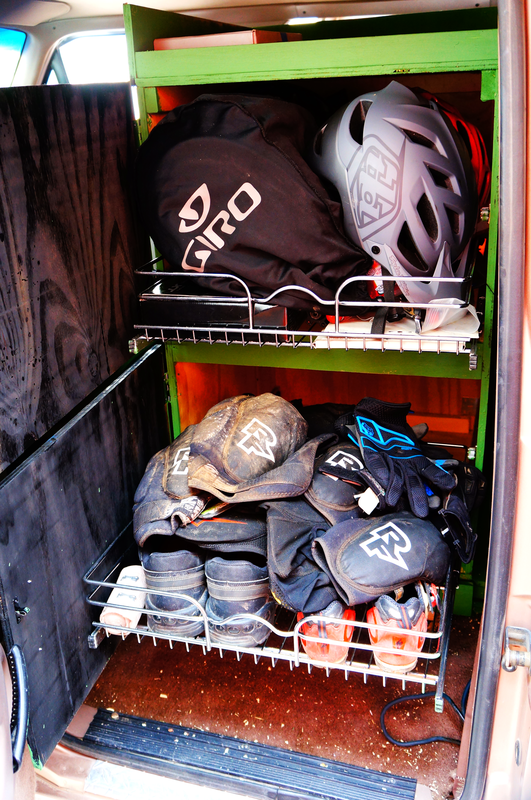 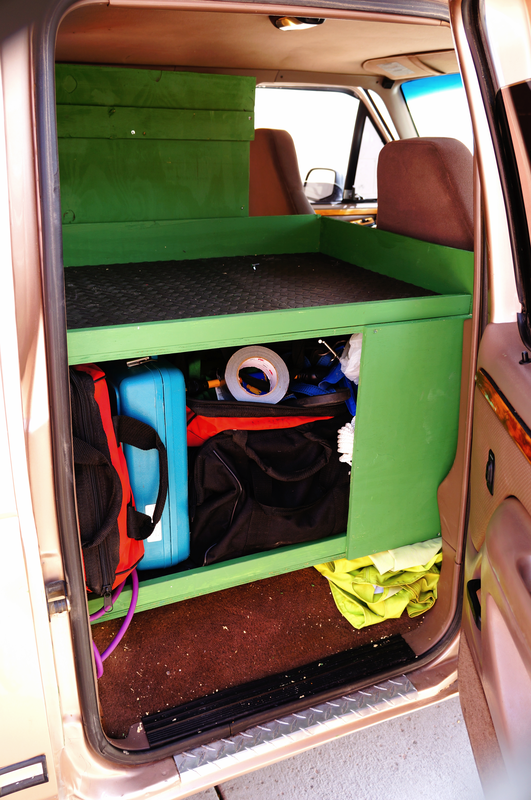 Fit in the essential tools, and most critically, duct tape.

The last step was losing the cargo trailer. It was handy, safe, and kept the bikes out of the weather, but I decided I didn't want to tow it; images of me jack-knifed on some National Forest road kept popping into my head. I loaded it with the stuff labeled for storage, which also meant leaving my road bike and dirt jumper behind. Once the cargo trailer was packed, it went into a storage unit on the Front Range. 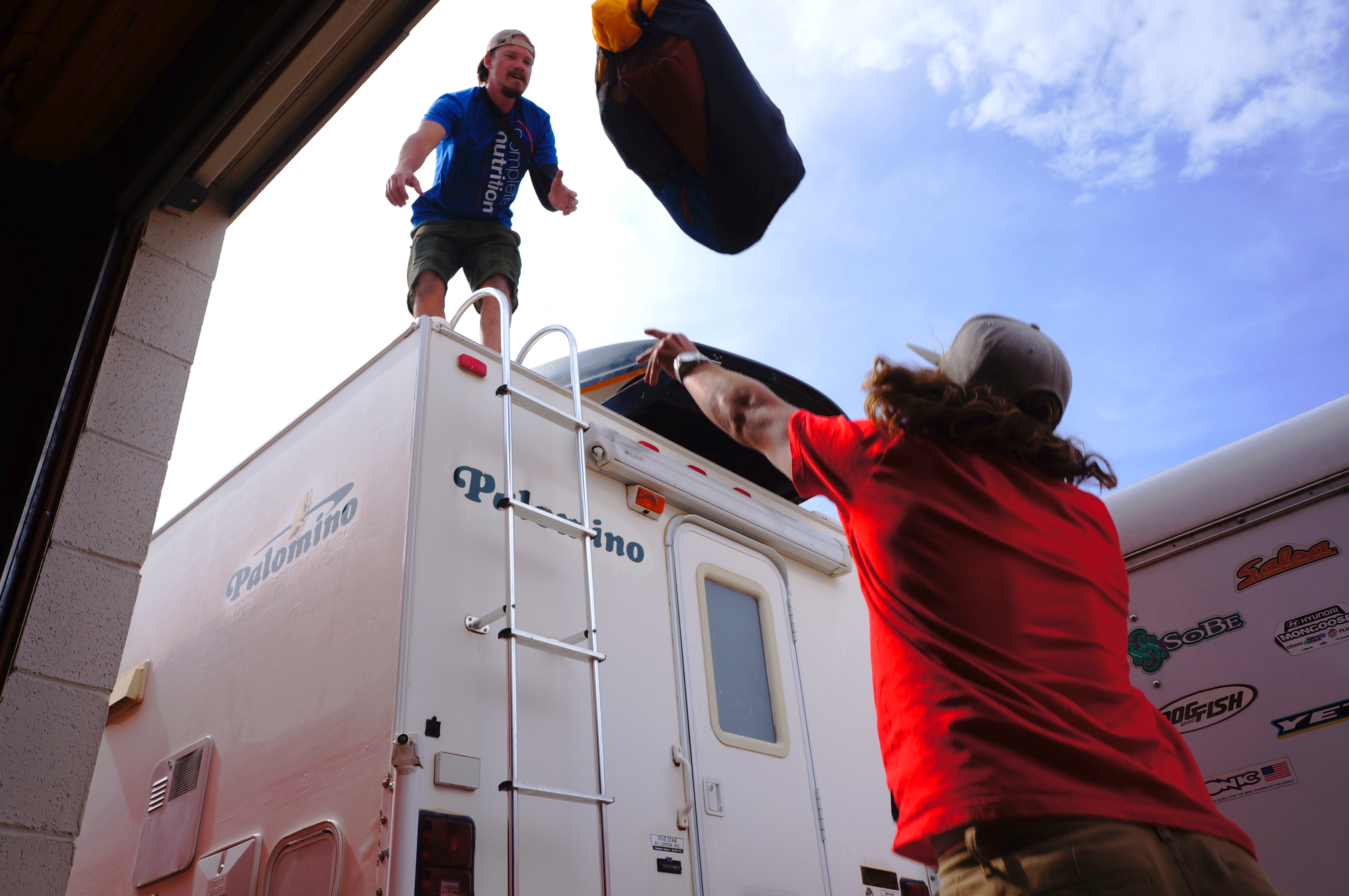 We packed up the last things from the unit and I was nearly ready to hit the road.

There were a few mechanical items that I had also been working on with the pickup. With the high mileage, I expected it would need a few things, so I replaced a few sensors and a couple rubber boots. It also needed brakes. I had done pads and rotors before, but this truck turned out to be a huge pain in the ass, and being a 3/4 ton truck made it much more difficult. I had to disassemble the four wheel drive hubs just to remove the rotors. This required a couple special tools and some Youtube clips, and what should have taken a few hours took all day. Even once I had reassembled everything I still had to take it to Ford to have the bolts on the rotors pressed in.
Thankfully I had the hospitably of some friends-they helped out big time, not only with the brakes, but also with hot meals and the elusive hot shower. Thanks Dave and Mary! 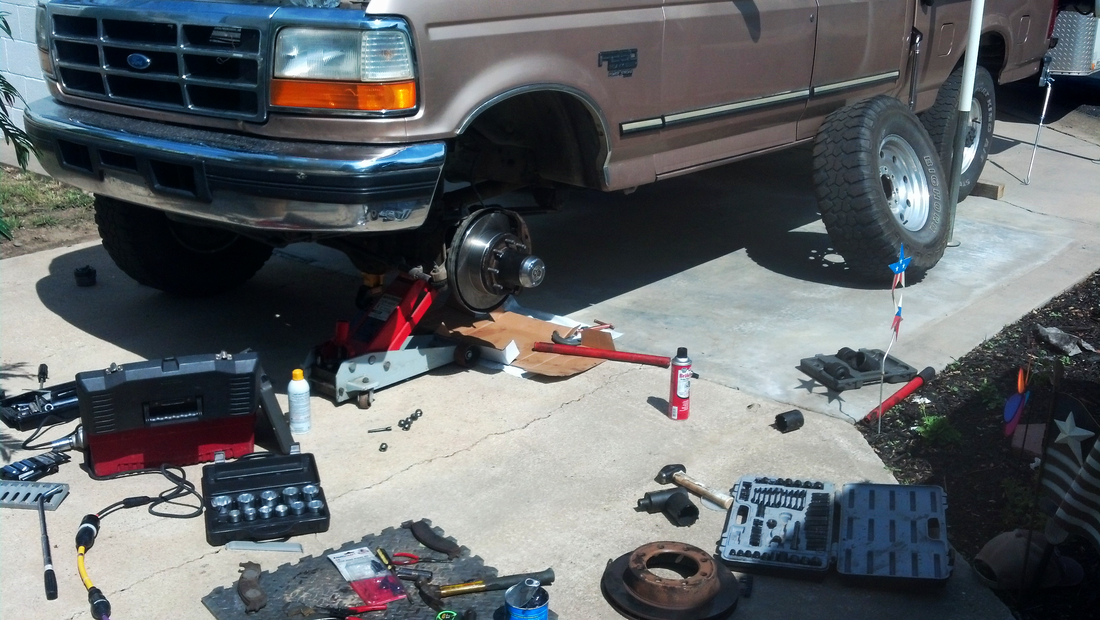 17 days into my 10 day schedule, I was nearly ready. The last big task was to paint her. I wanted something that would blend both in an urban and natural setting. I decided to go with a grove green. A quick sanding and some rollers and we had the thing painted and ready to go. 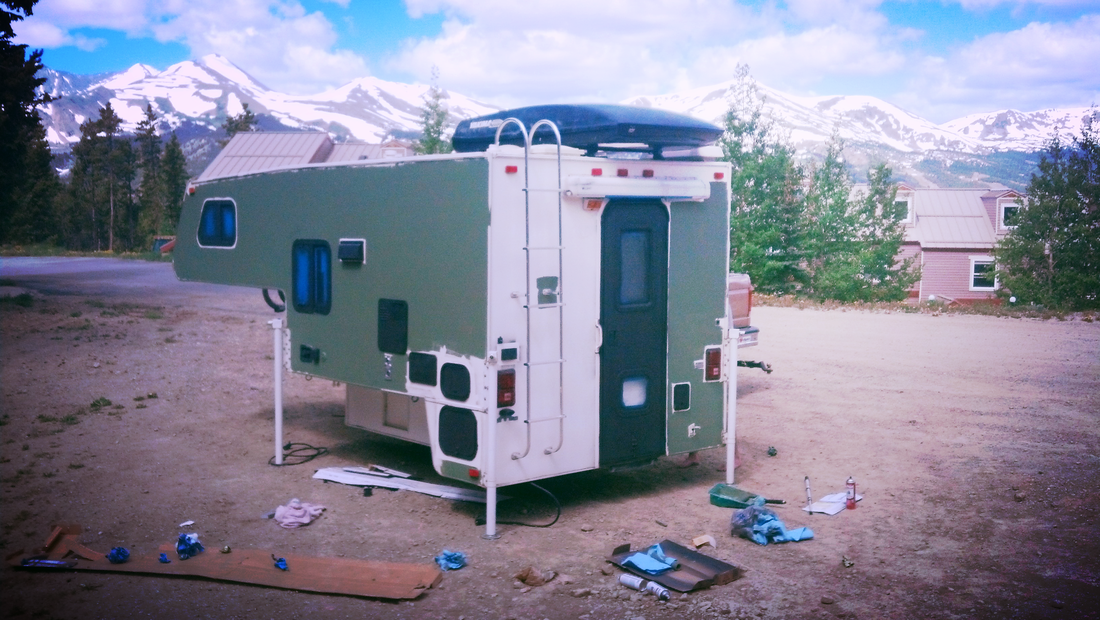 Painting The Betty at a friend's above Breck. Not a bad backdrop for the project. 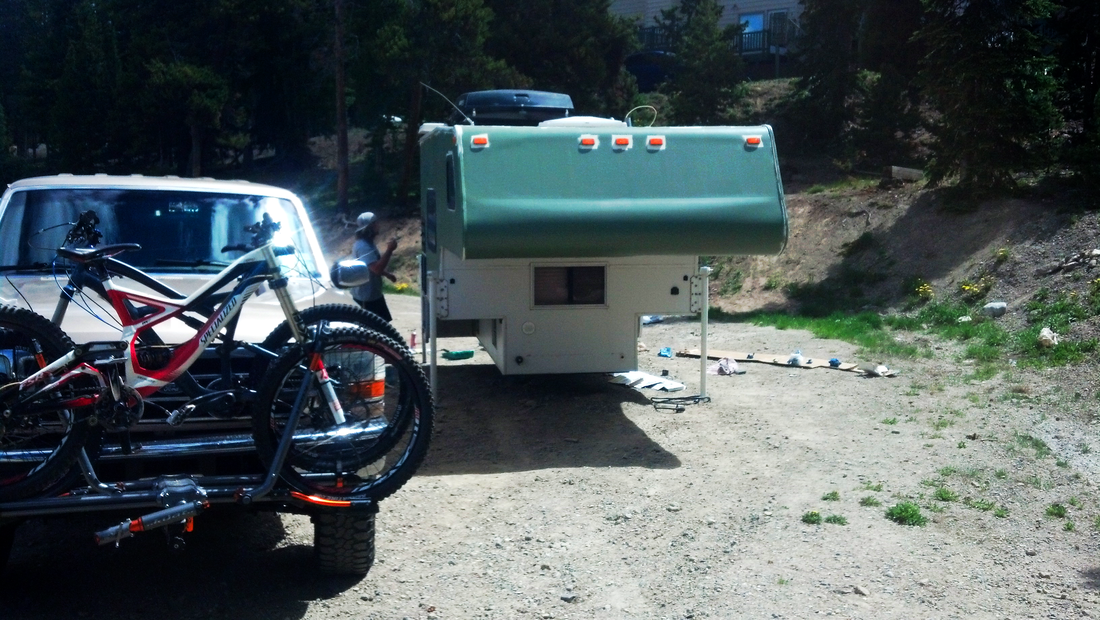 Everett finishing up some detail work.

With the trailer gone, bikes mounted like hood ornaments, and The Betty once again flying, I was back on the open road!

If you want to see what me and The Betty are up to, or check out past adventures, cruise over to my blog at MilesintheMirror.com!