Far Out Places: Crested Butte and the Elk Mountains

For TGR's upcoming snow film Far Out–presented by REI–we set out with a simple goal to shoot our segments in ways that were outside the norm. That goal brought us out to Crested Butte, Colorado where we teamed up with our longtime collaborator Clayton Vila to put together a part that merged park and street influences with the always stellar Sean Jordan.

There was just one minor snag–Colorado and the areas around Crested Butte suffered from an incredibly dry season this year, which required the crew to improvise in a pretty major way to get a segment together in a week's time.

We caught up with Vila and Jordan to talk about what it's like shooting a segment in such a short time period when the weather has been less than stellar and how the East Coast and street skiing influences of the crew helped the team think on its feet. 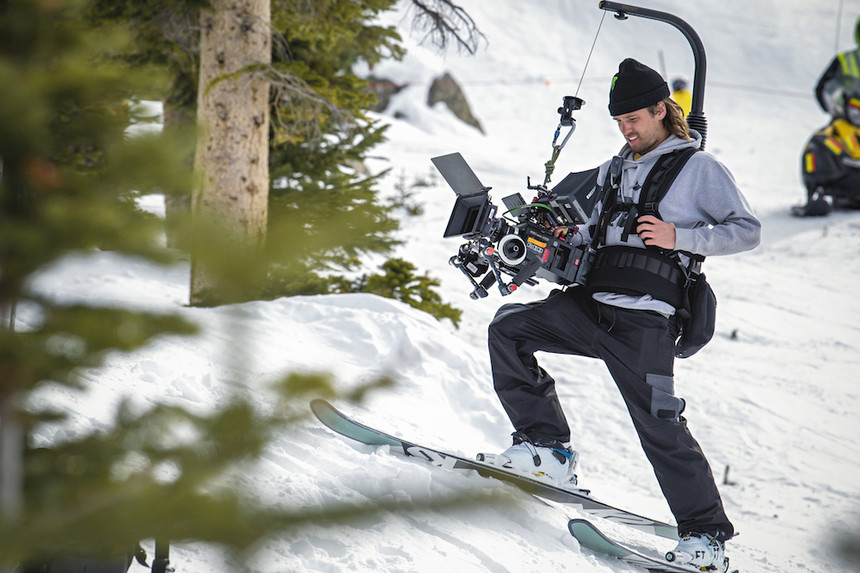 TGR: So how long were you guys in Crested Butte for?

Clayton Vila: We were there for about a week; it was a quick mission.

How different is it shooting a segment in such a condensed timeframe versus segments where we're on location for a month or more?

CV: I guess the difference between a shoot like Crested Butte and, say, Albania, is that in Crested Butte we had a more scripted approach to it. In terms of production it operated more like a commercial or narrative set–at least that's how I operated as a director.

RELATED: Check out the Black Diamond gear that kept our team comfortable during the long shoots

You know, we went on a scout beforehand, found our locations where we could maximize our time and shooting. For these kinds of shoots, you create a shot list or a script that is linear and then you shoot nonlinear to maximize your time and capture images for your piece. While skiing is always a bit of a weather hold thing, and we can never make it into something that is perfectly studio styled in terms of our shoot strategy, it was pretty controlled and we had a good amount of staffing, so it ran like a well-oiled machine. I was working with a crew I trust, we had our schedule dialed with the resources to do what we wanted, and we accomplished it. 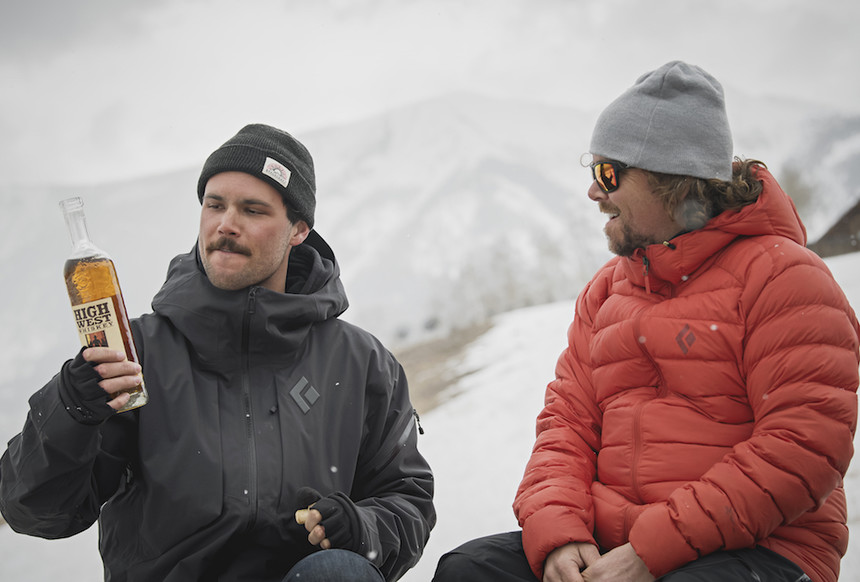 That's why there's a difference in length between the two types of shoots. That said, with the shortened timeframe, it’s more work every day. A shoot like Albania is more run-and-gun and scouting while on the ground, where Crested Butte ran more like a documentary.

So then, what was the biggest hurdle in making the segment come to life?

CV: We got unlucky with weather–it like, didn't snow all year in Crested Butte. There was almost no snow on the mountain when we got there–they had the worst base they’ve had in like 20 years, so that was a big problem.

But when we showed up the weather was consistent and continuous, so that helped. We had blue skies consistently, with each day similar to the one prior, which helped us in shooting exteriors out of order. Still, if we said, "Let’s build an 80-foot jump" that just couldn't happen. We tried to get as resourceful as we could, and Crested Butte had a cat towing snow all over the place for us, but you just can't build huge features with so little snow, and we didn't have time to blow snow, so we were using what we had on the ground. 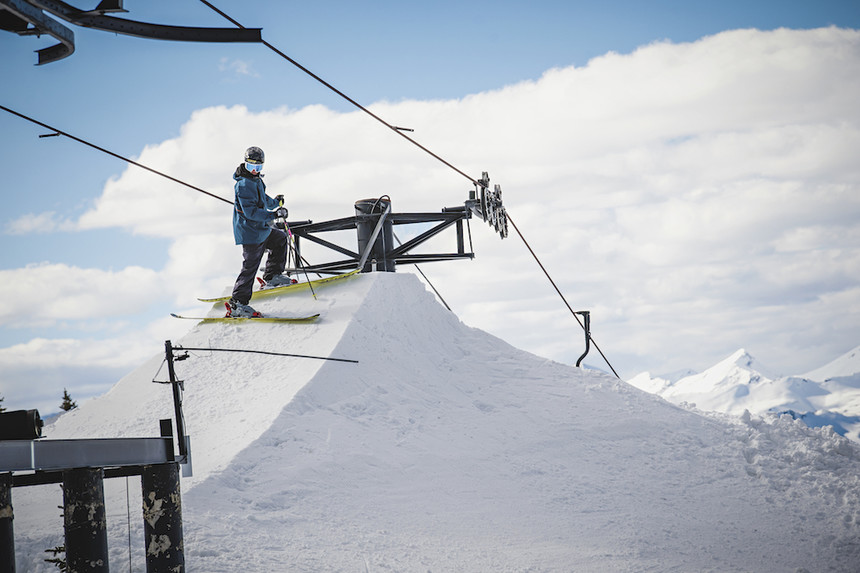 When you can't build massive kickers you get creative–like building a hip into the top of a chairlift tower. Nic Alegre photo.

It meant Sean had to get creative as a skier, and we'd try to get as resourceful as we could with the shoot. We did things like have Sean slide on a lift cable–that was cool. We did gaps through trees and stuff like that, and for us as filmmakers it was just a goal to make everything look as intricate and cool as we possibly could, and add some zest to each shoot.

How much do you think the crew's East Coast and street skiing roots helped you with that?

CV: Yeah, until you mentioned it I didn't really think about it, and I can only speak from my standpoint as a director of it, but when Todd [Jones] handed me the project, he was like, "We're doing a segment in Crested Butte and we don't know yet what we're doing with it."

It could've gone any direction.Once we showed up it was like, "Wow there’s no snow here." But the thought maybe the segment was not possible because there wasn’t snow never crossed our minds.

You know, when we went to Duluth last year, there was literally zero snow. We poured snow on the ground and dressed sets to look like winter. It’s something where–when you come from the East or street skiing, your'e used to working with no more of than a foot of snow. You aren't scared of a lack of snow, because a city is different than a mountain. You know, if you're airing 20 feet over concrete, that's a lot of time in the air to think about landing on a pretty unforgiving landscape. 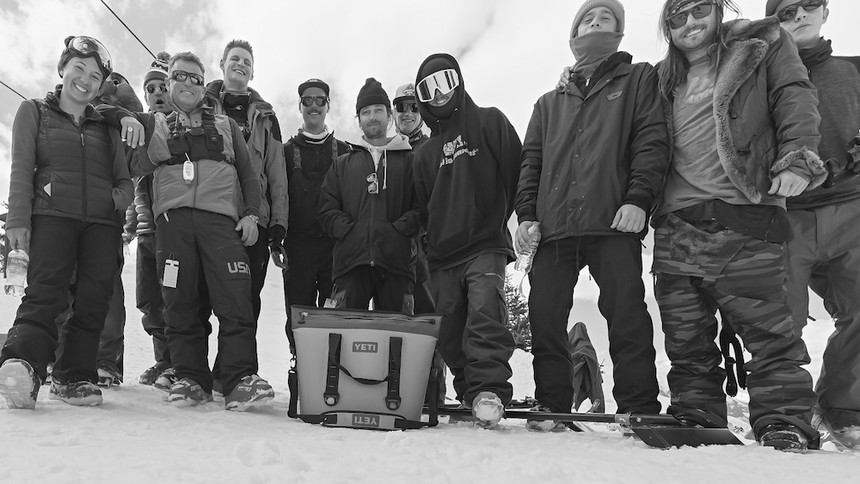 So I think those two influences–street and the East Coast–were pretty big. I ended up hiring a big crew and almost everyone onset ended up being from the East. Todd comes from Massachusetts, my director of photography Matthew Pothier is from back on the East Coast. We had Nic Alegre from New York and Austin Hopkins who is a Northeastern boy, so we all were used to working with suboptimal conditions.

What kind of strain does that improvisational aspect put on the crew?

CV: Well it was really on the fly, so regardless of who the athlete is, you need as a crew to come up with good ideas, but you have to stay scrappy. You all need to be gritty, and you can't have some pro skier prima donna, you need to be willing to work. Having Sean to shoot was really an ace in the hole.

Sean is half street, half park, and just really talented. I love filming with him and directing content with him because he lands things first try, and he'll do a trick exactly the same way multiple times so I can get multi-angle coverage of the hit. He was the right guy for the job all-around, because I've been skiing and shooting with him for a decade, and with the street scene we're used to being extremely resourceful and making something out of of nothing.

That’s what it is with street skiing–there is no such thing a good conditions in the street. What we call "good" is a foot of snow over pavement, we go find a staircase and after six hours of shoveling, we make something and hopefully succeed in making a video out of it. Sean is with that, so it was a blessing having him.

So, with shoots like this it really comes down to having all your ducks in a row before you arrive?

CV: Absolutely. Pre-production is the name of the game–it’s something I'm used to. You have to take a linear shot list and get every piece you need and maximize your efficiency day-to-day. And if you can't shoot a feature one day, you shoot lifestyle and more narrative stuff, like this shot we got of a skier riding a horse into town and emphasizing the Western flair of Crested Butte.

At the end of the day, we made the most of what we had and I'm happy with how it all came out. We did what we wanted to do.

The horse scene. Can you shed some insight onto that?

Sean Jordan: With CB being an old cowboy town, its made sense. We did quite a bit of shooting with the horse all over town, it was not easy. It made for quite the scene though haha. All I am going to say about the horse scene is that it was a "team effort" haha. I think everyone will enjoy the footage.

What were some of your favorite spots to hang out while you weren't shooting?

SJ: Crested Butte is a small town so it was cool to have everyone know that we were shooting and come and check it out, whether it was on the hill or off. We ended up eating at this little Thai spot called Ginger Cafe twice. It was some of the best Thai food I have had. We showed up one night right before they were going to close, but they stayed opened, served us and hung out. Only in little ski towns do you get that kind of service. I am looking forward to getting back to CB for more skiing in the future!