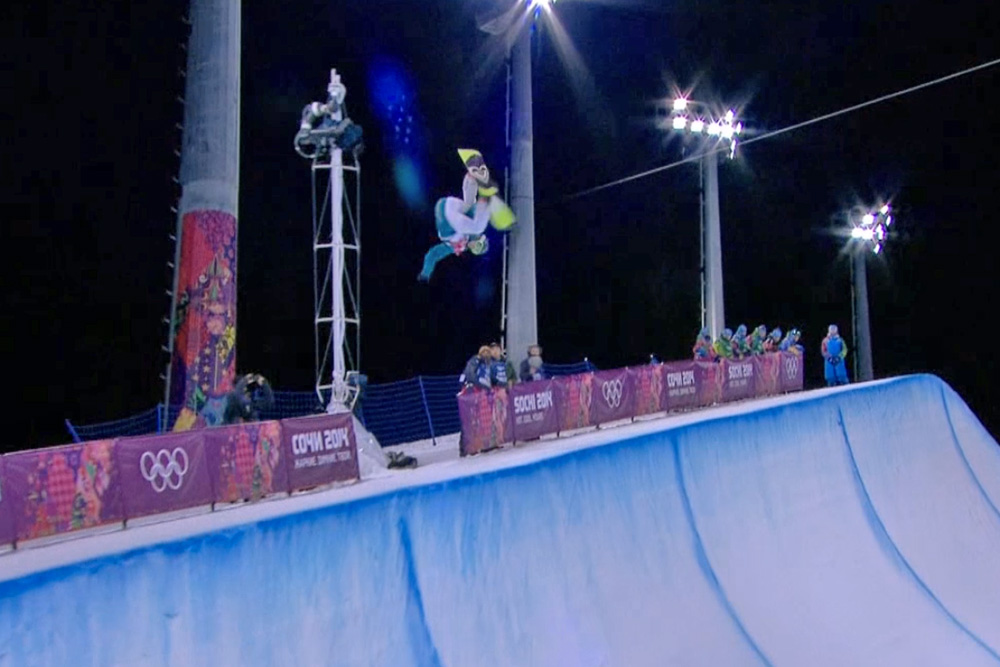 Torah Bright, en route to her second Olympic medal in Sochi. Screenshot taken from NBC's live stream of the event.

The journey to finals has been tough. Let’s not forget underdog Sarka Pancochova of the Czech Republic, who took a nasty spill during ladie’s slopestyle. She recovered in time to be a contender in the ladies’ Olympic halfpipe, but couldn’t put together a finals-worthy run.

The nighttime conditions were said to be better than those at the men’s halfpipe finals due to the lower temperature that kept the pipe firmer than the sugary mess that it was during the men’s comp. But despite the more favorable weather, the snow still sucked, and the pipe looked like it had been cut by a volunteer after he’d drank too much vodka and decided to operate a faulty Zaugg with no training. Hannah Teter tweeted: “This is the sketchiest halfpipe finals I’ve seen in a long time.” #Sochiproblems. 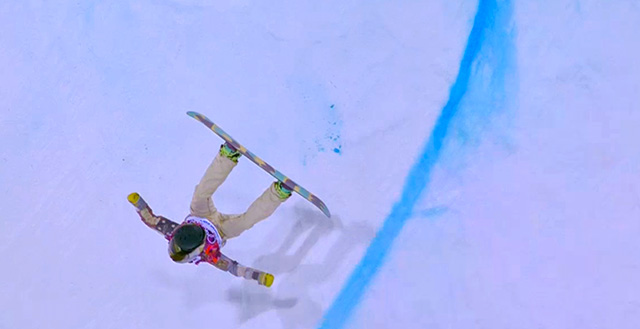 Kelly Clark, yet another victim of poor conditions at the Sochi halfpipe.

Almost all of the athletes ate shit on their first run, except Hannah Teter and Kaitlyn Farrington, who both contributed very solid runs. Teter nailed two 900’s and two 720’s during her initial run.

Kelly Clark put up a huge second run, landing a backside 540 and a frontside 1080. Clark’s second run scored a 90.75, pushing her above Burton teammate Hannah Teter into bronze medal position.

On the other hand, relative underdog and American team member Kaitlyn Farrington stomped two clean, consistent runs in a performance that will surely boost her name recognition. She nailed a 900 and air to fakey in the first round and an alley-oop 540 and another backside 900 in the second. Farrington, a 23 year old Salt Lake City native, was the first woman’s rider to perform a backside 900. She learned to snowboard in the fifth grade and has had five wrist surgeries. Fortunately for her, this is likely the last time she will have to compete at the Rosa Khutor Extreme Park. 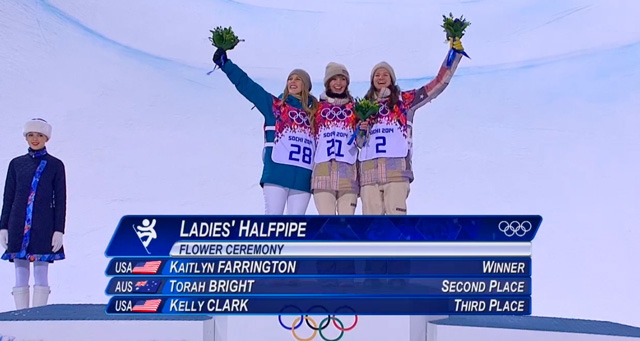 In the end, Farrington held onto her winning run and bumped three returning Olympic medalists out of gold medal contention in the process. Torah Bright followed in second for the silver, and Kelly Clark knocked Burton teammate Hannah Teter off the podium for the bronze. Getting bumped by Kelly Clark at the 11th hour may leave Hannah with a bad taste in her mouth, but at least she gets to go home to a boyfriend (3-time MTV Real World champ Johny Devenanzio) who can do this: