Fredrik Ericsson is a professional skier and mountaineer from Sweden. He just began Ski The Big 3, a project in which he plans to ski the world's three tallest mountains: Everest, K2, and Kangchenjunga, a feat that's perviously been attempted, but never successfully completed. Ericsson and his climbing partner, Trey Cook, are currently on the slopes of K2, their first peak, and have been blogging about the trip. Below is Cook's latest post from Camp 2. Follow their blog here and stayed tuned for updates.

One of life’s simple pleasures is undoubtedly snow falling on a tent while you’re dozing inside, enveloped in a cozy, warm down cocoon. And oh, how quickly that pleasure turns to pain when the tent in question is perched at 6300 meters (20,669 ft) and the snow is being driven by a 40 mph wind and you’re feeling a desperate need to pull on your boots, wrap yourself in Gore-Tex and, like a chrysalis expanding its wings, emerge from your cocoon and move up to Camp 3. But for now you’re pinned and all you can do is snuggle deeper into your bag, listen to the snow on the tent and thank God for those simple pleasures.

Of course, we wouldn’t even have been up there if the forecast for the past three days had not shown sunny and clear—a big, bright sun icon that might as well have read, ‘Climb now!’ 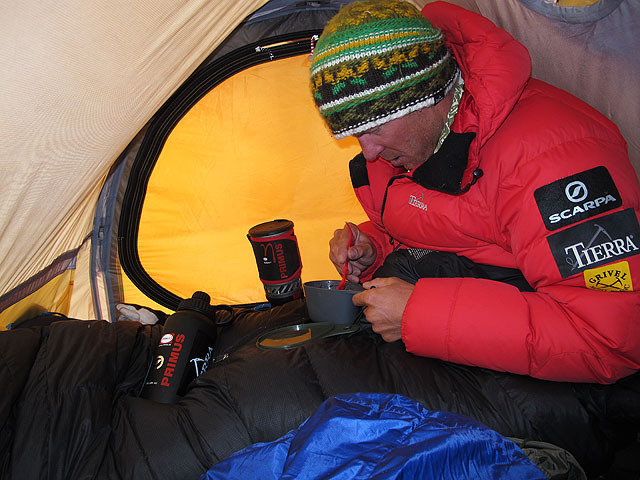 But the reality for the day, like the previous two days, had been wildly different with regular snow squalls, respectable wind and limited viz. Abbas, adventure chef and prince of the Baltoro, told us the Baltis have a name for summer weather like this. “Same word for woman who sleep with many different man. Nobody like these.” Guessing it’s the same word that my sister—the last and perhaps strongest line of defense for the dignity of women—uses when talking about those gals who seduced poor ol’ Tiger. Right then, we’ve got some seriously slutty weather happening up here on the Baltoro. 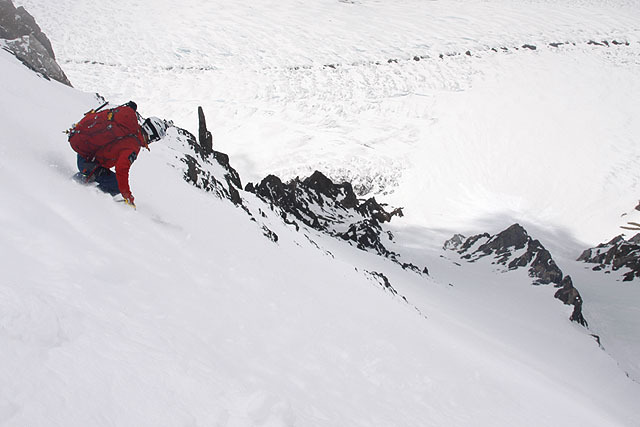 And true to slutty behavior we were easily lured from the tent with a flirtatious ray of sunshine, a coy break in the wind, a seemingly innocent patch of clear blue sky. The absolute absurdity of two remarkably immature but otherwise fully-grown men gearing up in the confines of the lightest, most high-tech alpine expedition tent on the planet is slapstick of the highest order: boots to the head, elbows to the kidneys, an arm each in the sleeve of the same jacket, that sort of thing. By the time we’ve both been spit out of the tiny portal the icy wind had picked up again and the sky was dark grey. But we were out, geared up and aching to climb so we went anyway. We worked our way around a rocky corner covered with ice and snow and began angling left up a 45-degree snowslope towards a rock band where we could faintly see a few fixed ropes. By the time we’d reached the rocks it was snowing again and visibility had dropped. The rock was covered with a couple of inches of snow so I pulled hard on the fixed lines a few times before clipping a jumar onto the best of them, slapped a ‘biner onto the next, thinking this absurd act of atonement might save me from my previous sin. I began moving up the rock putting more weight on the old ropes than I knew I should. I made it to the anchor, a bomber piton, my body jacked with adrenaline, sucking hard in the thin alpine air. 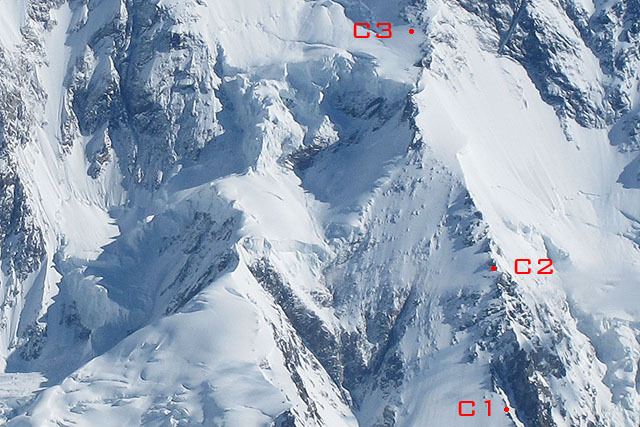 Frippe followed, treating the fixed lines as if they were toxic, meticulously freeing the pitch like he had every other pitch to this point, skis angling high out of his pack, ski boots in crampons on snowy rock. He has a true alpinist’s desire to climb a mountain rather than a rope ladder, to carry all his own gear and to skip the drugs and supplemental oxygen that some use to bring a mountain to within their limited reach.

We climbed through the blowing snow to about 6500m (21,325 ft) where the rocky ridge met a 50-degree snowy shoulder that lead to Camp 3 at 7000m (22,965 ft). Navigating a path through these rocks will be one of the cruxes of Frippe’s ski descent and this first reccy provided him with a look at how he’ll potentially make his way through. Despite the big snow year the wind has scoured the ridge leaving loads of exposed rock. It will be a difficult passage but this first look inspires Frip with the confidence that it will go. We turned to descend back to Camp 2 in shamefully slutty weather.

We went to sleep in C2 naiively hopeful that at least one day of our three-day ‘window’ will meet the forecast, but again we wake up with cold wind and blowing snow. Harlot. Nothing to do but descend. We gathered up the garbage and remains of a shredded tent that had been left from a previous expedition and turned towards base camp. The plan had been to scope the final crux of the ski descent—a rocky band separating C2 from the lower slopes. The route up this band ascends a narrow, rocky couloir that is impossible to descend on skis. And when I say impossible I mean it’s not even do-able on ski rappel. However, from base camp Frippe had spotted a snowy line that passes the rock band skier’s right that might have potential. But the line crosses steep, unknown terrain and we’ll need better visibility to explore it.

We descended the snowfield below C2 and rappeled the couloir before Frip locked into his skis and began making turns back to base camp. Variable snow, 47 degrees, poor visibility, a rucksack loaded with 10 extra kilos of garbage left by ‘fellow climbers,’ and a big, fat smile on his face. As I watched him make smooth, controlled turns down the face it was clear to me that with his total devotion to alpine ethics, his love of skiing, and his respect for the beauty and power of K2 that Fredrik Ericsson represents a unique and important posse of chargers from Chamonix and beyond. For these men and women, it’s more than just about getting to the top; it’s about how you do it and what you leave behind. Here’s hoping that a little slutty weather won’t cheapen the experience.