From Podiums to Film Credits: How Big Mountain Skiers Are Making It—or Not 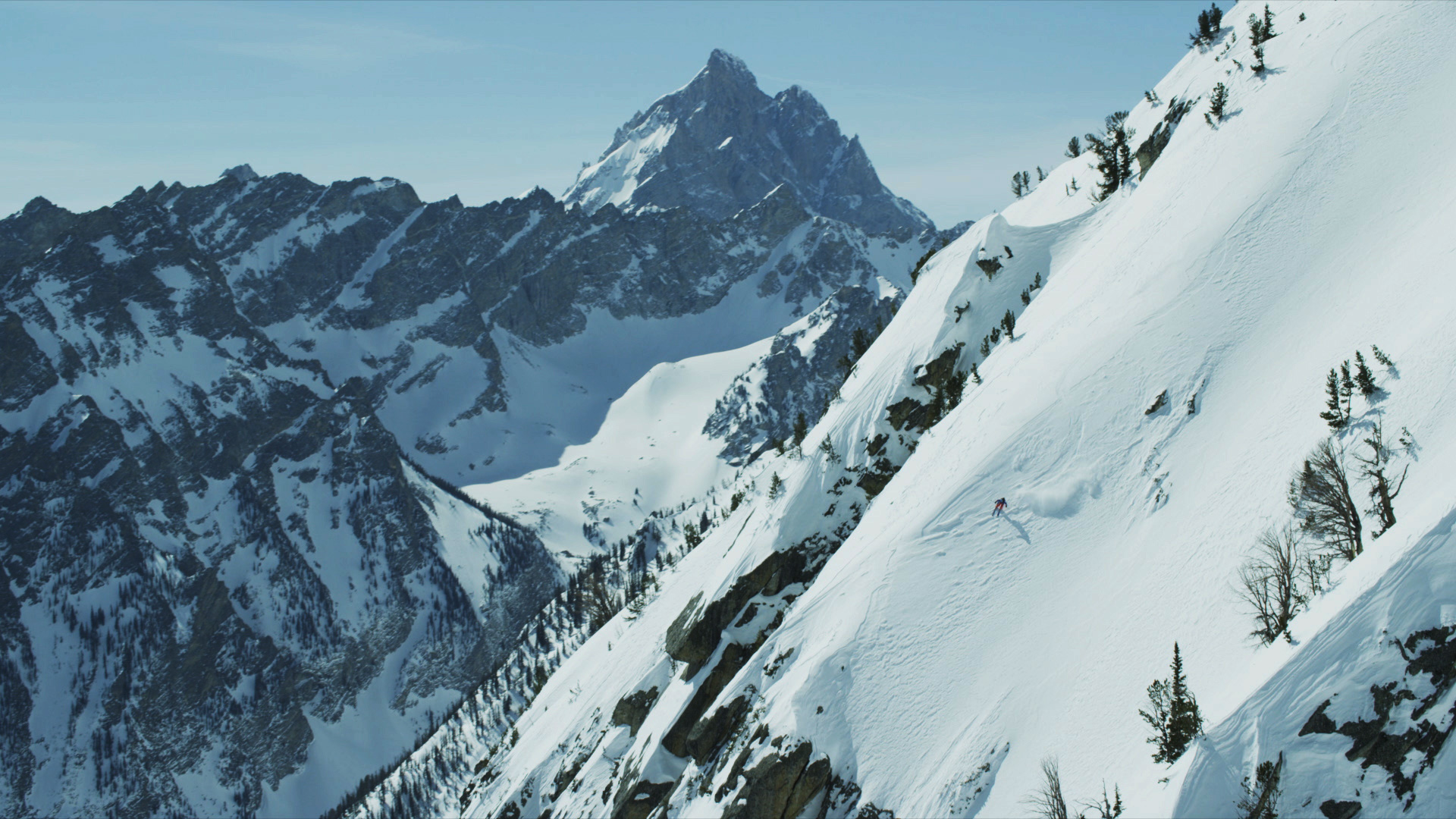 Angel Collinson first made a name for herself on the Freeride World Tour. Now, she finds her name in film credits for charging lines like this one in Grand Teton National Park.

Big mountain contests push participants’ skiing, compelling them to choose lines that aren’t first-choice, huck thirty-foot cliffs onto what are often cement-like landings, make adjustments according to what competitors are skiing, and take whatever risks are necessary to make it to the podium—but to what result?

Unlike the long-established competitive freestyle scene, freeride competitions don’t carry the huge purses. The overall winner in each category of the Freeride World Tour (FWT) receives $5,000; second and third places get $3,000 and $2,000, respectively. Furthermore, the only freeride contest with a major television deal is Travis Rice’s visionary Red Bull Ultra Natural, which was canceled this year due to a conflict with NBC’s Olympic coverage.

If money and visibility are only small parts of the equation, why do the start lists of big mountain comps fill up only ten minutes after they open? 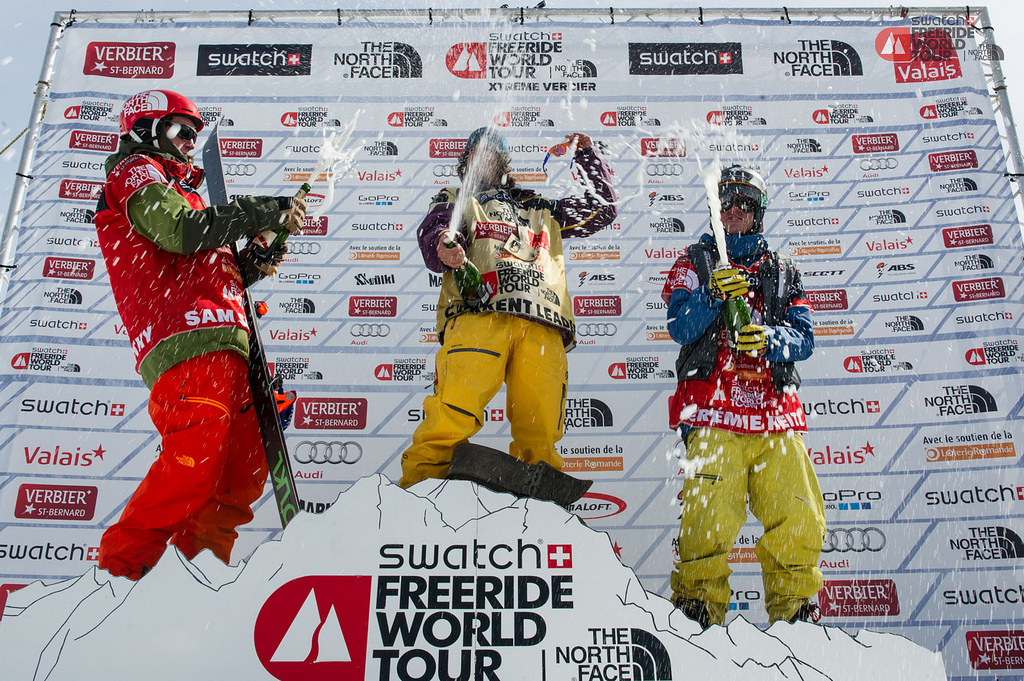 Travel. Camaraderie. The thrill of winning an event or an overall title. Catching the eyes of sponsors, big and small. Cheering on fellow skiers and riders. All of these are common and valid responses. But, for many, filming is the endgame.

Who Gets Chosen and Why

TGR athlete and FWT competitor Griffin Post explains that big mountain competitions can initially put you on the radar of sponsors, but tend to carry limited value in the long-term for American skiers and riders.

“In Europe, the tour is much more important. In the U.S., the focus is on social media, the content you are producing, and the video parts you can come out with,” he says.

If money and visibility are only small parts of the equation, why do the start lists of big mountain comps fill up only ten minutes after they open?

“That said, the athlete sponsorship landscape has changed a lot with athletes being able to generate their own content,” Post adds. “Ten years ago, contest results were a really good measuring stick. Now all these other content outlets help you create value for your sponsors.” 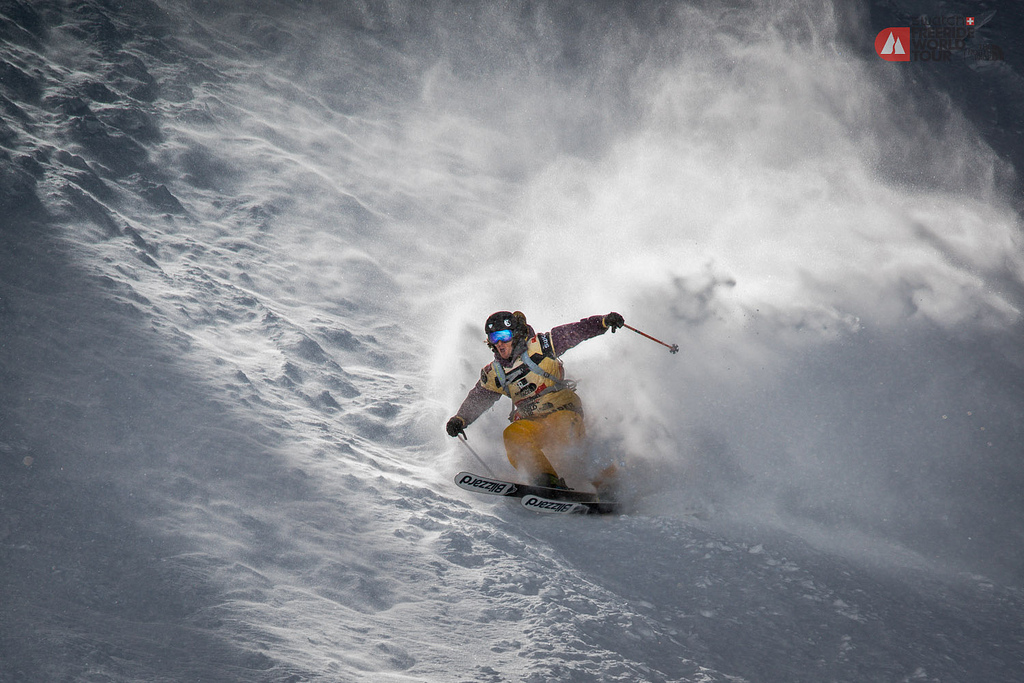 Cranking out turns for the judges during the Verbier FWT stop. Photo courtesy of the Freeride World Tour.

With a handful of high-level results on the tour, Post says he was only able to break into film after living in Jackson for two years and developing a relationship with Jackson Hole Mountain Resort and exploring the surrounding backcountry.

Steve Winter, owner and executive producer of Matchstick Productions in Crested Butte, agrees that competition results aren’t the benchmark production companies use to select the athletes with whom they work.

“I do not think we value competition results as much as we do style and personality,” he explains. “We like to shoot skiers who want to work and want to be out getting awesome shots.”

With so many talented skiers and riders on tour, an element of mystery continues to surround the question as to why some athletes are picked up by film companies while others continue to ride outside the spotlight. 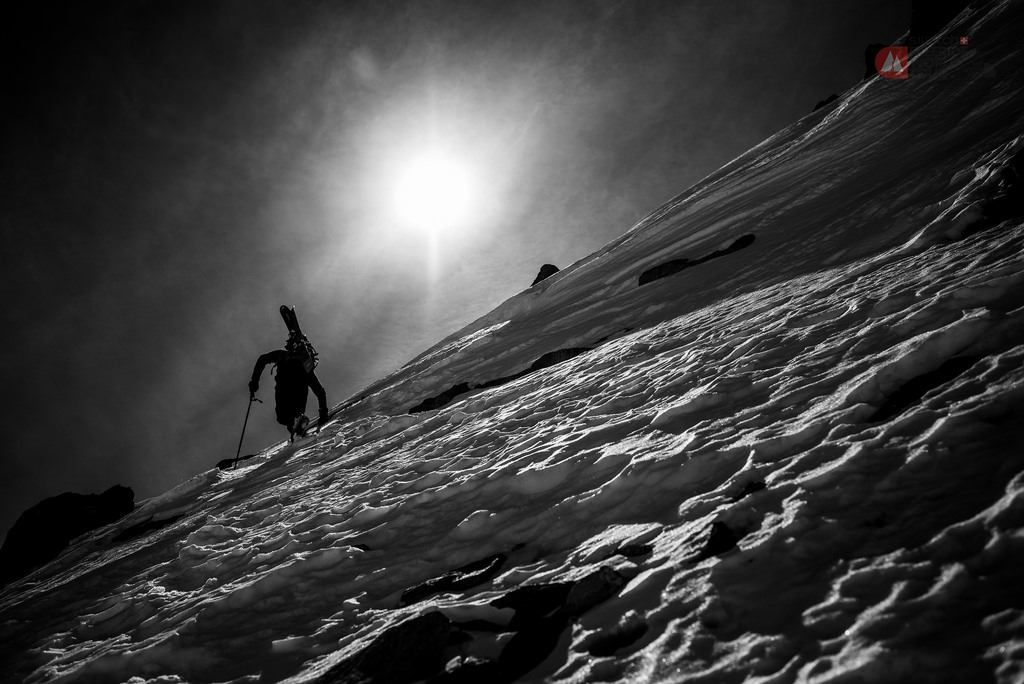 Winter calls this “almost impossible to answer” because there is not one certain way MSP chooses its skiers. He says that in the past the company has found a few skiers through the Freeride World Tour, but mostly just from being in the business and getting leads from friends and other skiers.

Some skiers, like Snowbird native Angel Collinson, catch the eye of ski movie companies precisely because they do so well on the Freeride World Tour.

Collinson finished third overall in the 2012 FWT and then went on to ski in films such as TGR’s Way of Life and The Dream Factory. “It was a pretty easy transition,” she adds. “I didn’t have to turn any more heads: The groundwork was laid in competition. That’s a big thing logistically and politically.” 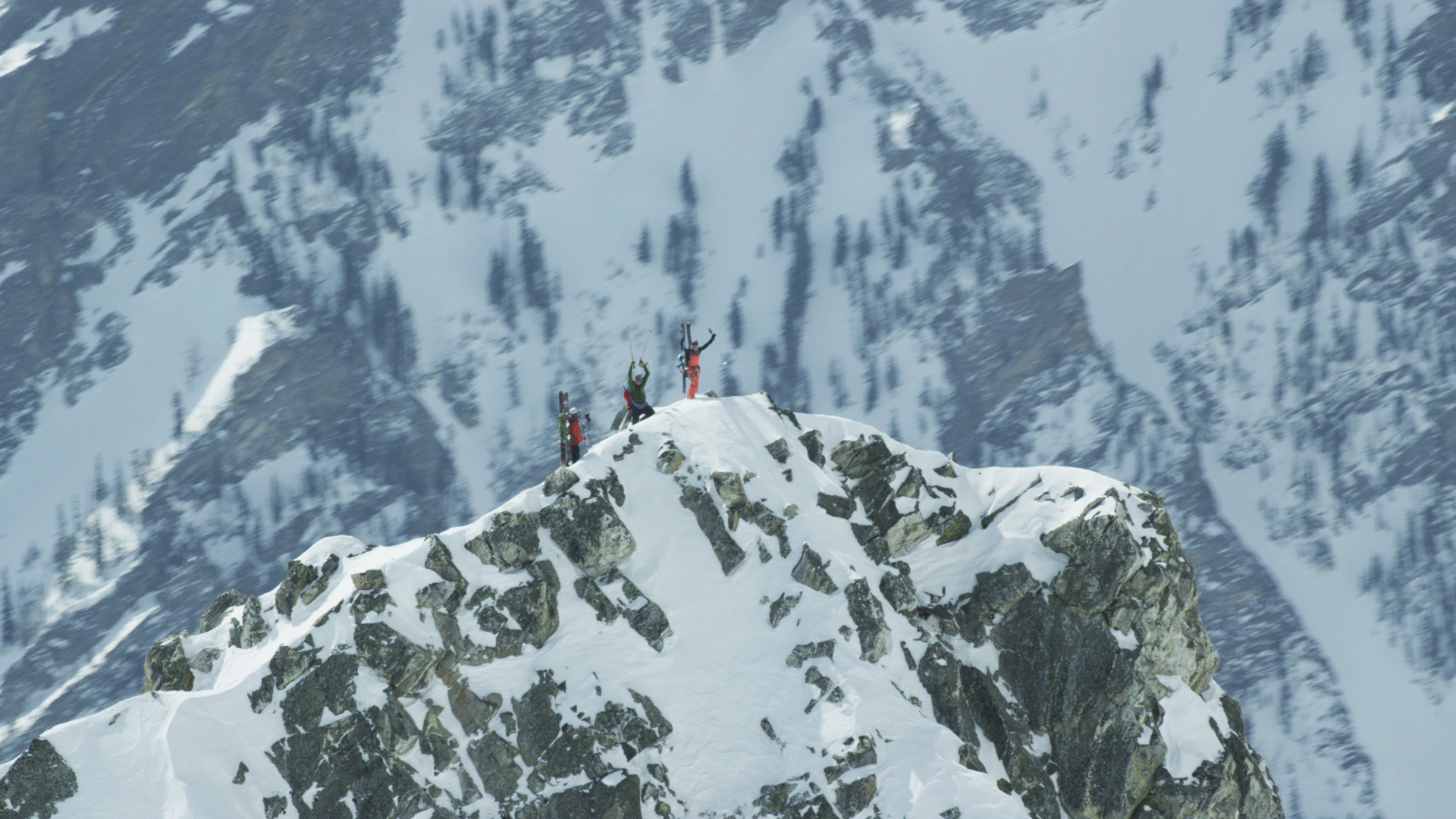 Angel Collinson and crew take a moment to celebrate their ascent of Mt. Moran's East Horn.

Collinson says that the biggest challenge in making the leap from competition to film is making sure your sponsors and the film companies want to work together. Waiting and choosing the right sponsor—especially one interested in creating a long-term relationship—can help cultivate a seamless transition from competition to film. 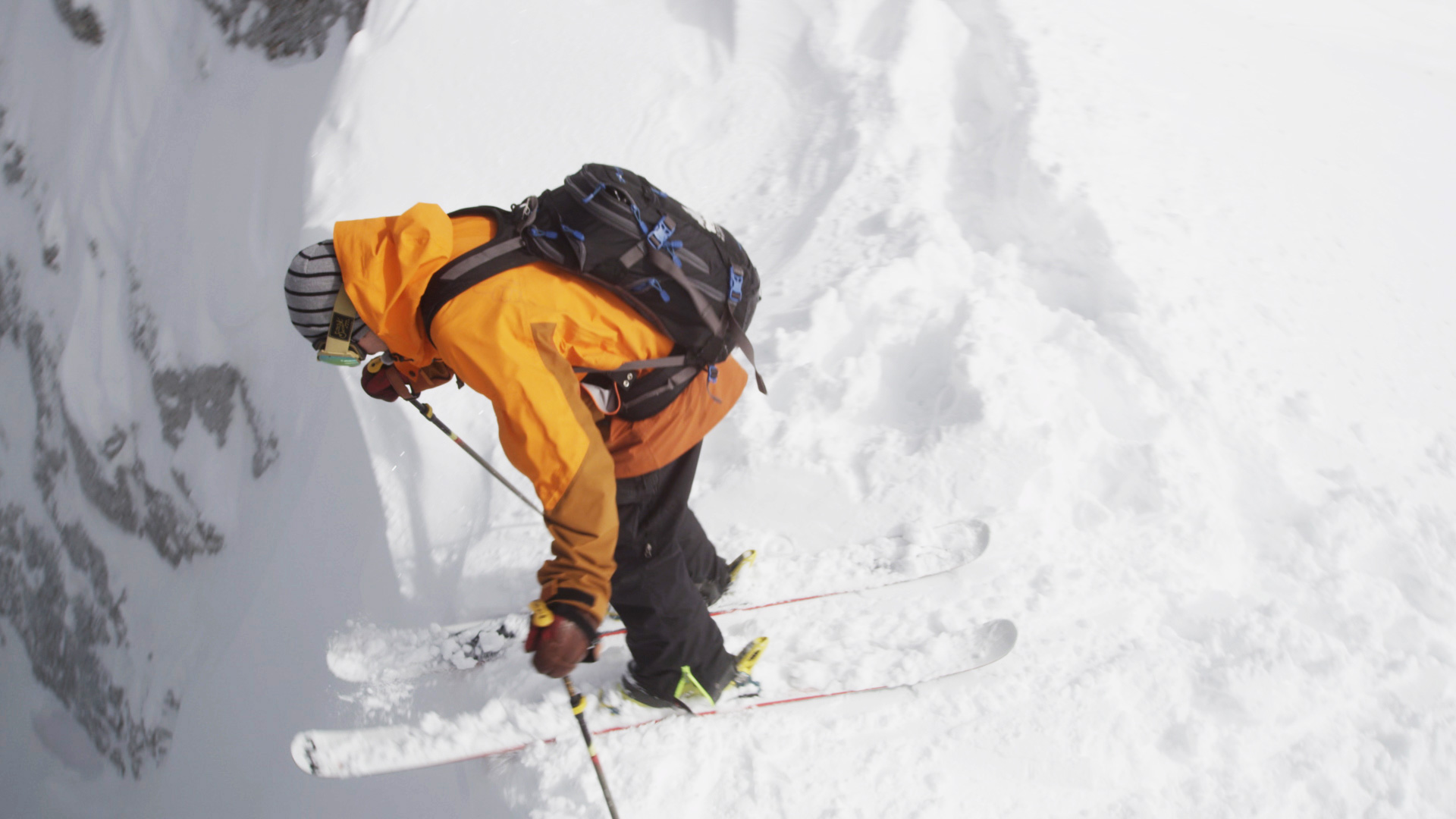 While filming for TGR's next film, Almost Ablaze, Colter Hinchliffe had plenty of time to ponder his trajectory.

Arsenault says trying to link together clean lines on a single face at a world tour event can be a challenge. For example, features may be close together, making it tougher to catch a tranny. Compared to hitting three or four airs in a line you chose for a film segment, he adds, a competition run on the FWT might have between five to seven airs. He also emphasizes the major drawback of competition: dropping twenty or thirty-footers onto hardpack can be punishing to your body, and competing all season can cause you can to lose your spirit of adventure and sense of exploration.

Greg Epstein, TGR’s head of physical production, emphasizes that while competing—whether it’s big mountain, freestyle or racing—develops skill, TGR is looking for people who are intrinsically motivated. TGR tends to seek out athletes who are looking to explore what Mother Nature presents, and not necessarily looking to prove their skiing ability to a panel of judges. He cites personality, style, compatibility with TGR’s crew, and the willingness to work hard as the attributes he looks for in a film skier. 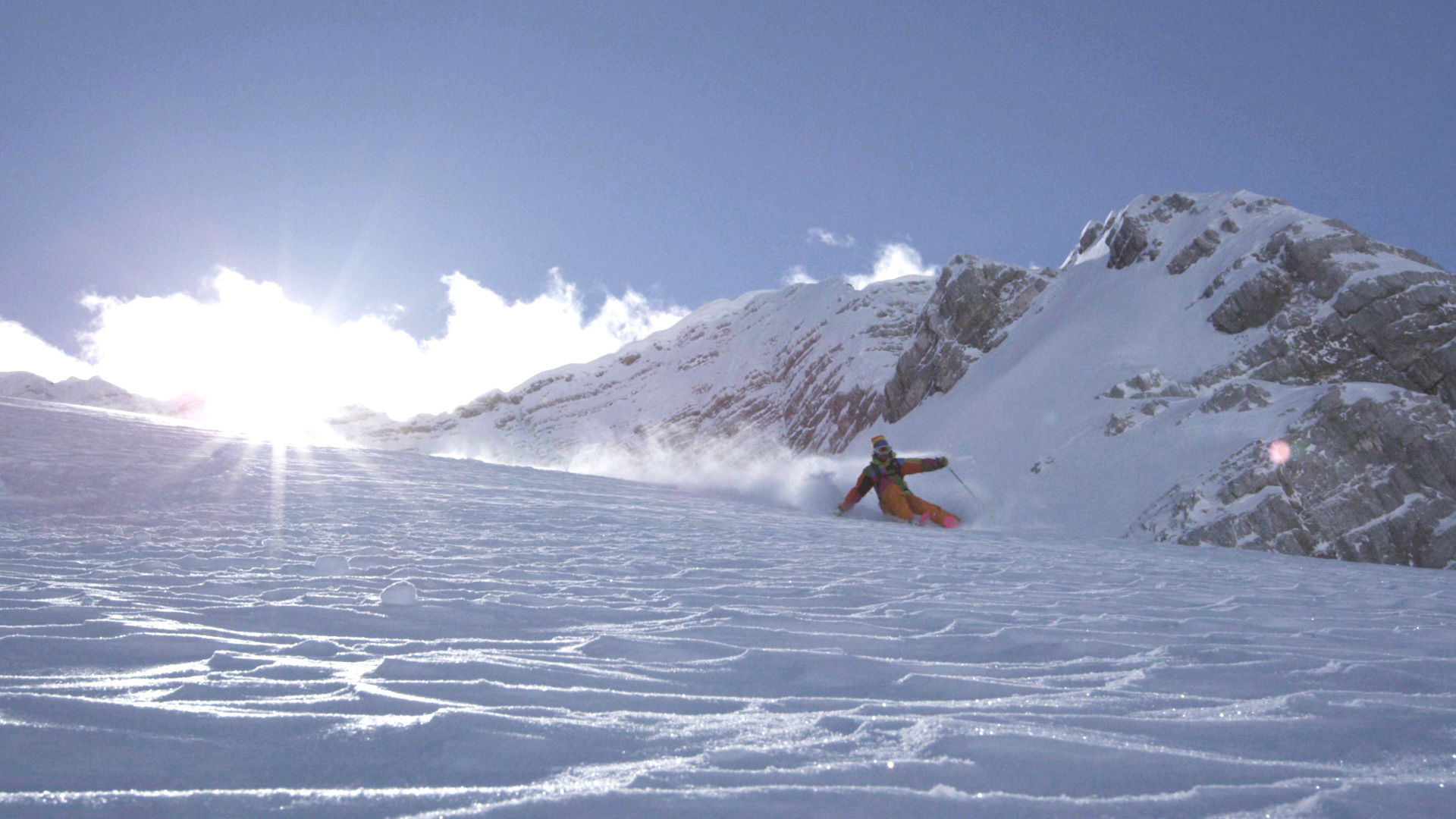 Every once in awhile, the film crews find you. Sella Nevea local legend Moses found himself in front of the cameras when TGR arrived his backyard.

“It’s the self-motivation that we as a film team are looking for—are you fired up, what are your goals?” Epstein asks. “It’s not revolving around the competition, proving I’m the best, it’s about people’s self-gratification almost.

He adds, “I do think that the competition separates the men from the boys. You can watch and see the best of the best. Not every comp skier is meant to be a filmer. A lot of them don’t like it because it takes a lot of time. You are standing around, not shredding around all the time. It’s not for everyone.”

“It’s hard to leave the competition without having a good plan. If [athletes] don’t have a plan, it’s harder to talk sponsors into giving them a bigger contract,” Collinson explains.

For example, a three-week trip to ski fluted spines in Alaska costs upwards of $20,000, a bill that sponsors foot through the travel expenses built into a professional skier’s contract, but the skier is not compensated more on top of such hefty travel expenses.

In order for skiers like Collinson to get a segment, her sponsors pay the ski movie company directly for production costs. The trade-off is in the contract. More exposure for the skier and his or her sponsors via a video part means the athlete might have a bigger travel budget and a higher salary the following season. 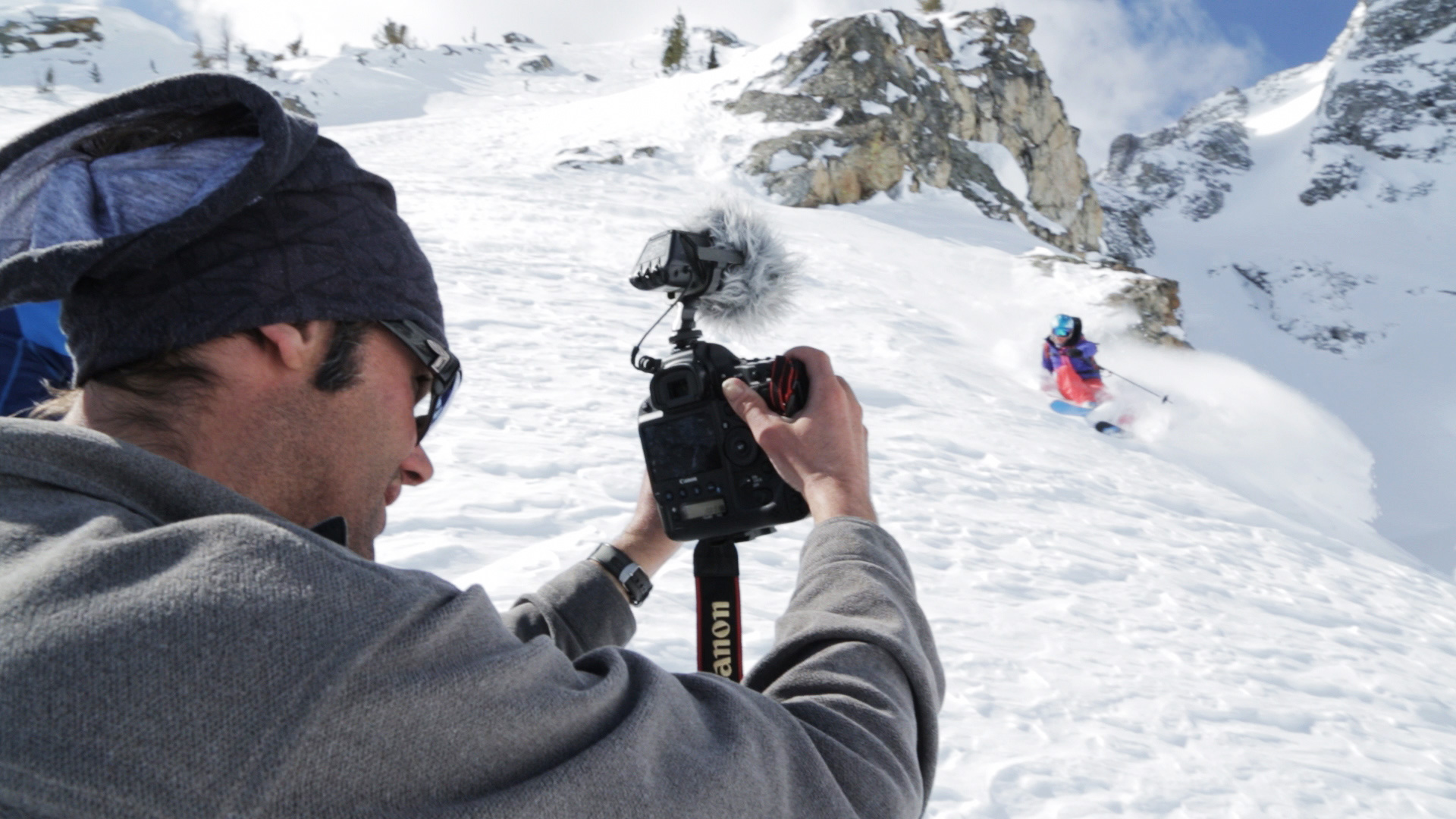 Chris Figenshau snaps some stills of Angel during her recent spring mission in the Tetons.

Once an athlete transitions to film, the pressure isn’t lifted. It shifts. The dangers of backcountry travel, getting a shot, obtaining finances to travel and film, and focusing on style all come into play.

The current Freeride World Tour format gives competitors one run on the day of the contest. Over the course of the six-event season, Griffin Post points out that it is essentially six runs in the year to showcase your skiing whereas during a good day of filming, you get eight or ten lines to do so—and the final product is judged in the court of public opinion. Post says that as professional skiers mature and begin to film, they become less likely to take unnecessary risks in competitions because these events represent a small fraction of their season. Younger skiers who don’t have their foot in the door, he explains, are going to be more willing to take those risks.

“Comp skiing is way more pressure of the moment,” says Sage Cattabriga-Alosa. “Filming is a whole season of pressure. You can crash filming and you only get to see the runs you laid down.” 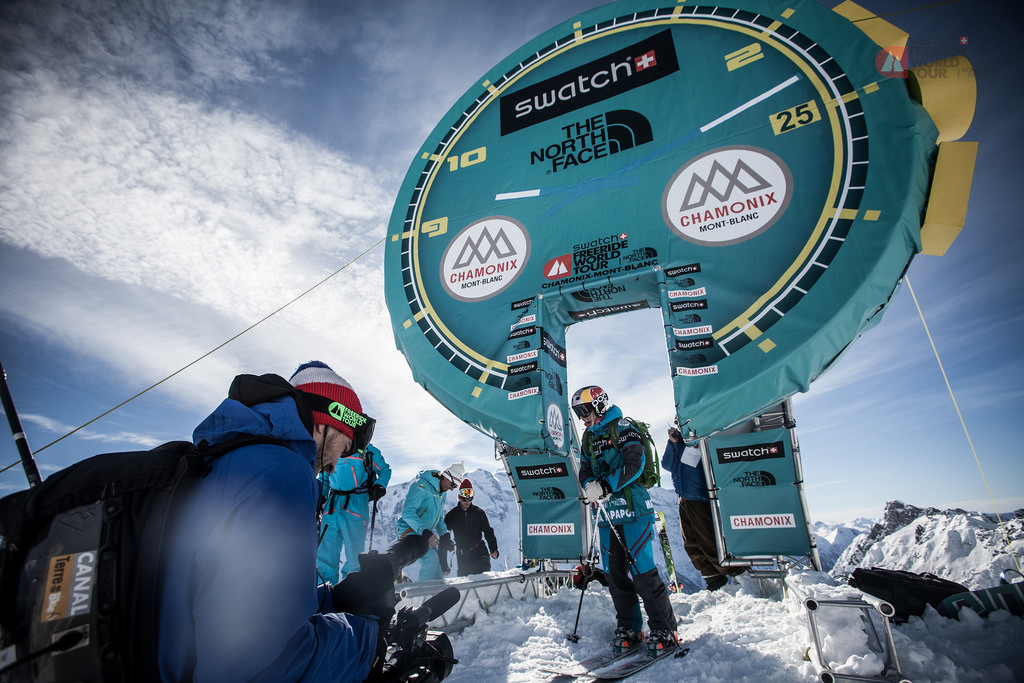 At the end of the day, sponsors want results—whether they come in the form of film credits or podiums. Photo courtesy of the Freeride World Tour.

Arsenault says the stress of filming is much more significant because he has to stomp a line far out in the backcountry, a long way from rescue.

“Every filming day might be the last day of the season,” he says. “By not stomping it, I might injure myself. I diffuse the pressure of getting a good shot by trying to survive the line.”

“Pressure is going to come from trying to put a segment together you are happy with,” Arsenault explains. “You might have wasted two or three days doing a line and crashing, and then you are running out of sunny days. Everything needs to line up properly. Mother Nature is really the one ruling it.”

Arsenault explains that once you start filming, you begin paying attention to how you look when you ski, your arm work, and the fluidity of your style. 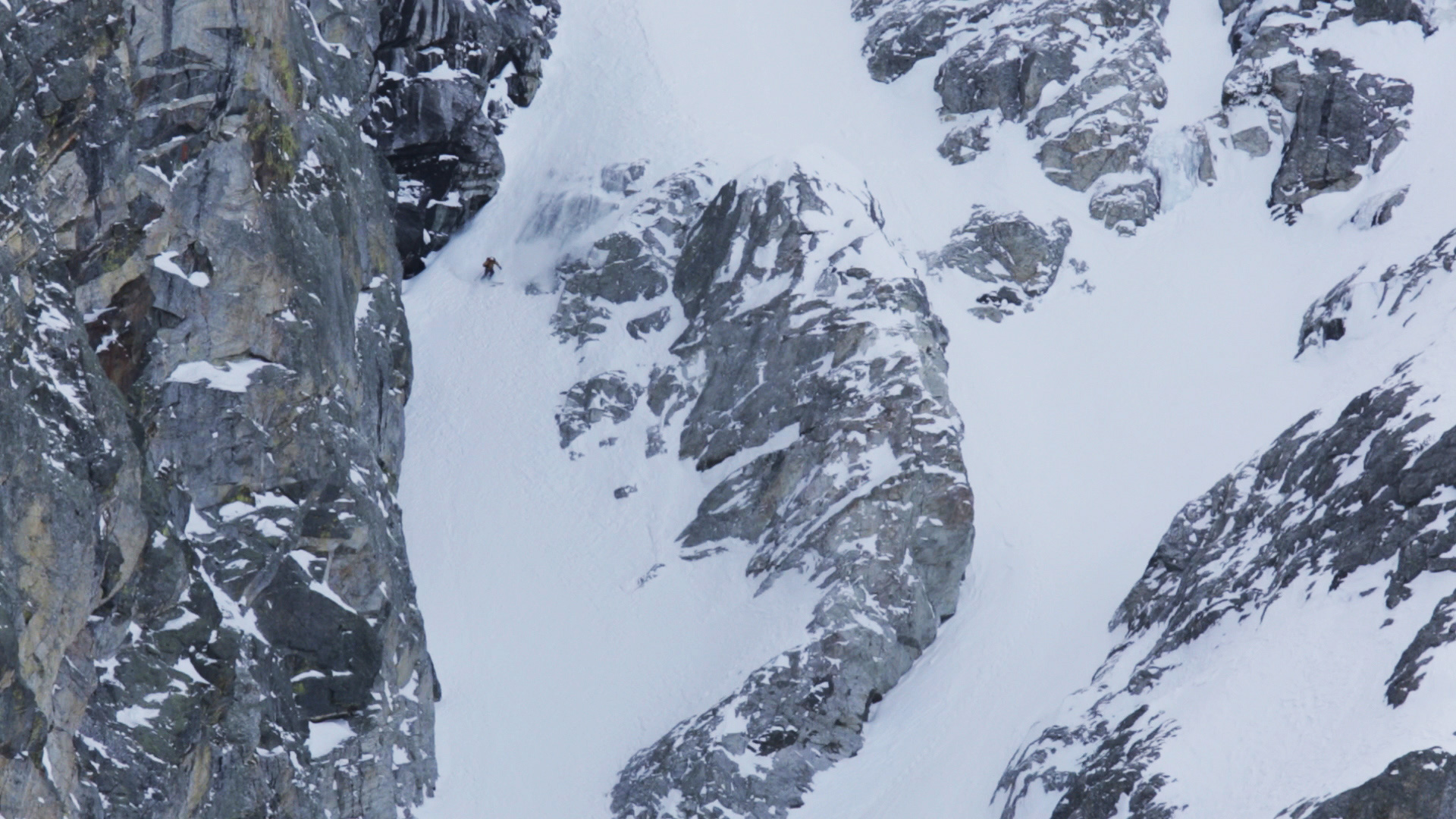 “I am still getting a feel for what I think will look good and what does look good,” explains Collinson. “Sometimes really gnarly lines don’t look good on film. Sometimes smearing your turns, throwing out more spray, and going slower so your sluff is closer looks cooler—versus competition skiing [where] faster always looks cooler.”

Winter explains that MSP is looking for a style with “quiet movements and explosive results.” Hands and style need to be solid and “not all over the place,” he adds, but one of the key highlights he touches on is an athlete’s drive and ability to work as part of team.

“Sometimes it can be slow moving and frustrating so keeping it fun and the stress factor low is sometimes the most important thing,” Winter says. “We are all in this to create special moments on film but having fun is most important—and it always creates the best [results].” 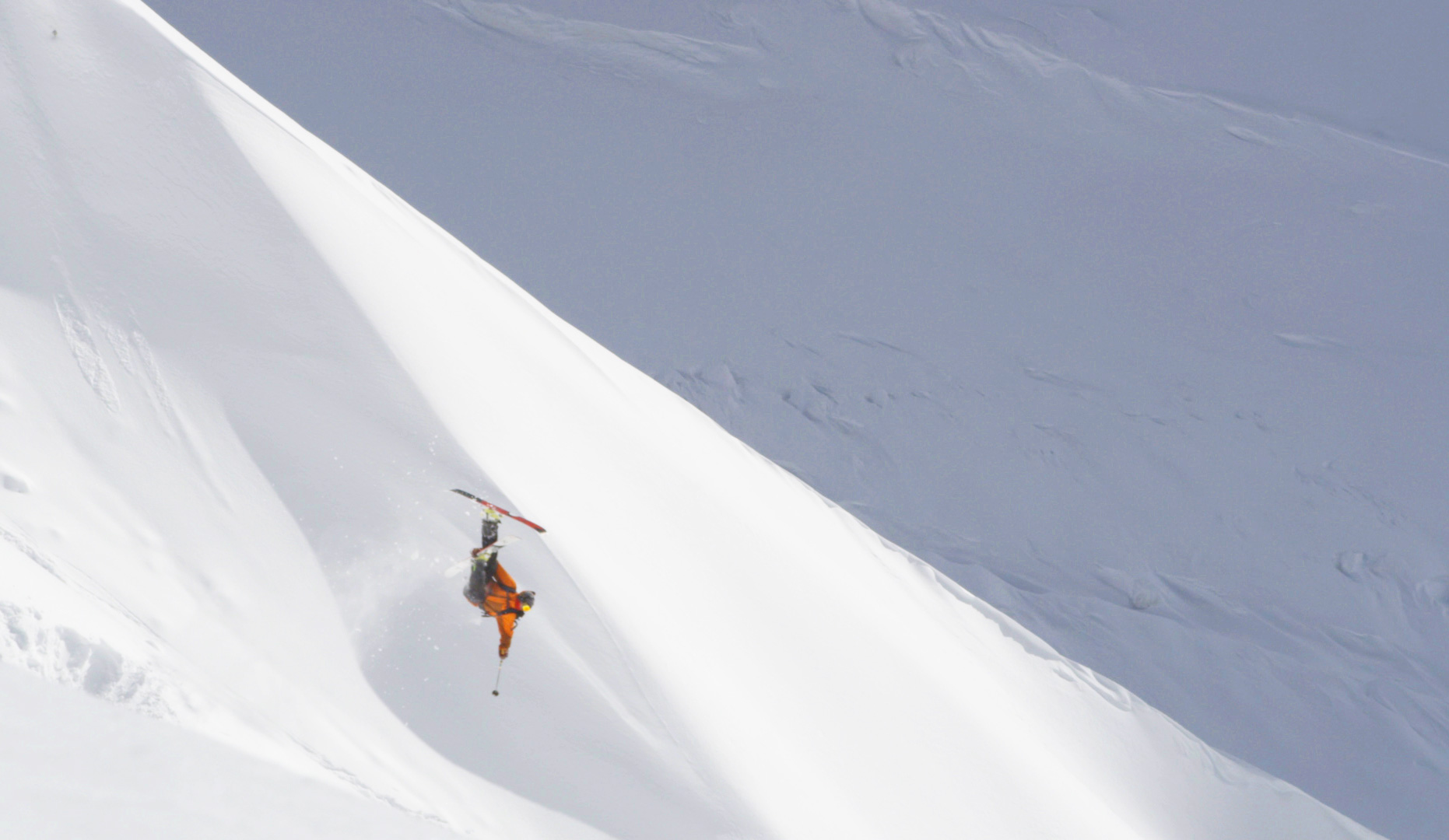 Colter Hinchliffe throwing down in Sella Nevea for Almost Ablaze.