My days emptying pint glasses around Denver were coming to an end. By this time, I wanted to push west on Interstate 70 to start collecting lift tickets. Also, the metropolis that Denver is can't exactly afford to be friendly to campers. After doing some sanctimonious trespassing on religious property the night before (WWJD?), I woke up with a glaring solar sky split to accompany me along a favorite monster trail outside Golden; Dakota Ridge.

'This might be the Front Range's most technical trail and he's not even wearing a helmet,' accosted a local the first time I did the loop years ago. A spandex-clad asshole concerned for my safety; how darling. A friend guided me my first time and it was instant infatuation. If the climb or clay doesn't dissuade you, the legendary rock gardens found on top might cause trepidation. Please leave your plastic pedals at home, newbies. If dinging up your carbon fiber super-bike causes stress cysts internally, bring a ride you can bang up. If you're not blazed out of your mind with stoke from that ridge, gaffing some trails around the musical monument that is Red Rocks should solidify this experience as mandatory for any seasoned rider. Helmets ARE a good thing, kids.

Something done before. Something new with beta. Journeyed less than a klick (kilometer for civilians) down the road to explore Apex. There is a small amusement park at the base so there will be families on the lower trails. On odd days you can only climb Apex and other routes. Despite the restrictions, the fun is splayed out across those hills. Enjoy the two-ways while being mindful of traffic. Only the really adventurous trail runners will dampen your speed higher up. Personal highlight was ripping down Pick N' Slide while bumping Major Lazer. 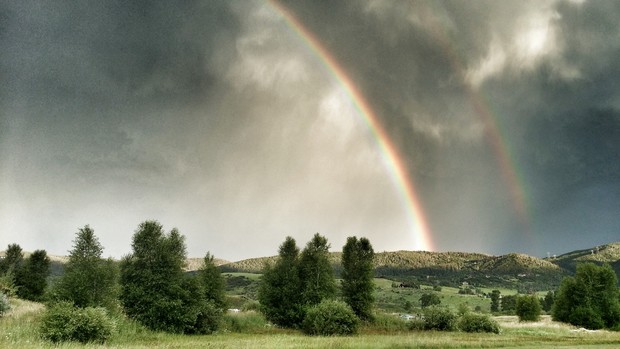 The rudder swung and my bumper finally pointed west on an invitation. Another birthday weekend! One of the many delightful things that Colorado has going for it can be explained thusly: Throw a dart anywhere left of I-25 and chances are remarkably high the spot randomly selected will be unique, gorgeous, and quite accommodating. Reel in those mooring lines and get out! Steamboat Springs provided a rather fabulous time with friends that weekend. Food, drinks, and mischief were all top notch. As they all packed up, I got hot on knocking runs out. 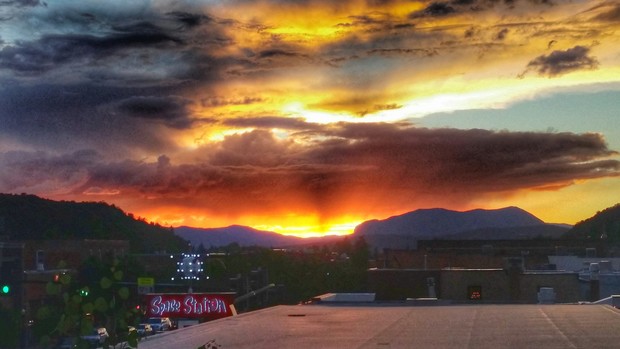 That Sunday saw two distinct memories get tossed into my Top Ten. Warming up at the resort's bike park trail called, 'Tenderfoot,' I got surprised by a black bear. My eyes surveyed it's muzzle and claws as it barreled down from trees, jumped on the path, and took off in the opposite direction. It distinctly had cinnamon splotches on it's coat. Blocking the trail, I stood there for a couple minutes in case the bear had second thoughts about clearing out. The rider that came behind me shortly thereafter was grateful. Unfortunately, my GoPro was pointing downwards when it happened. The audio caught something graceful along the lines of, 'Oh shit,' as I skidded to a stop. One of my favorite authors has a good theory why we tend to say that during eventful surprises or duress.

Rustler's Ridge and Valley View were great. Shot over to get the taste of some XC at Sunshine. All blues were infused with spectacular views that you start to get accustomed to. Then you pinch yourself and revel in gratitude. Best run that day was the western black diamond called, 'Creekside.' Rooty, rocky technical goodness as you bomb alongside a high volume forest creek. I can't recommend that and the next part enough: You owe it to yourself to trek up to Strawberry Park Hot Springs! 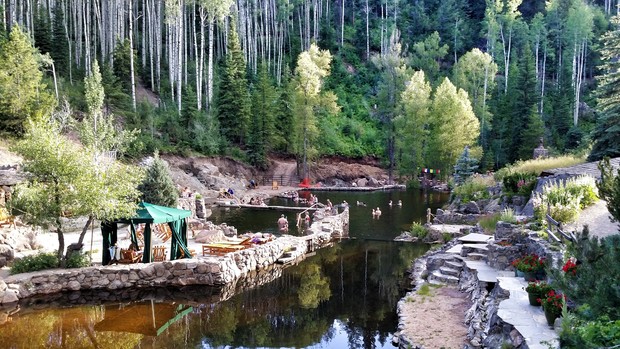 Over the next couple days, the challenges of new adventures presented themselves. Took my kayak, for the first time ever, down the Class II rapids in town. Tubed it with friends and beer so why not give it a shot? Turns out when you capsize and the river swallows your ride, it takes some effort to get out, run down the street, and jump back in to retrieve said ride. It was a blast though! The cross country trails just outside Steamboat Springs beckoned next. Spring Creek is extremely popular and packed. Dry Lake campground sits at the top and might be a perfect spot to run a shuttle or early morning session. A nasty storm blew in right as I was getting there. It was a privilege to sweep down it fast like a marauder since no one was venturing out. Thunder gave way to hail. Clad in towels back in my vehicle, I wore a wide grin. 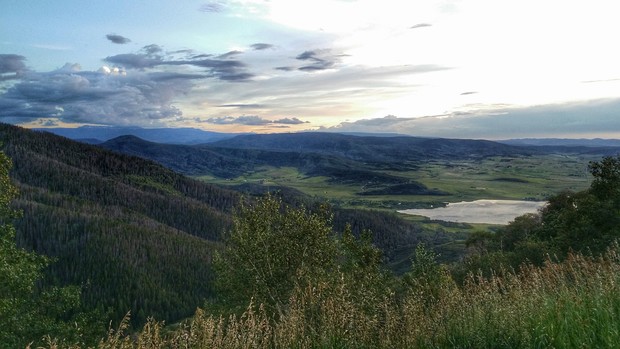 The Emerald Mountain trail system is walking (much less biking) distance from downtown. Morning Gloria is a really soulful green to take novice friends or family on. Not all of your friends will follow you up and down some gnar! Bluff's Loop, Lupine, and others deliver on easy to get to fun. If you start to get tired of town, chart your astrolabe north. Steamboat Lake State Park makes quite a spot to start running outlandish trips from. Shout out to Hahn's Peak Lake and the northern start of the Continental Divide at the border of Wyoming and Colorado! So much more to that section of the state! 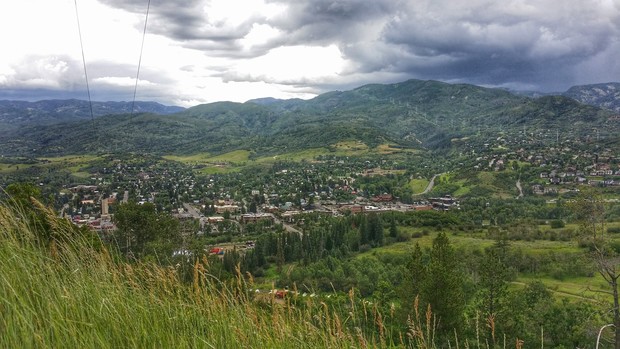 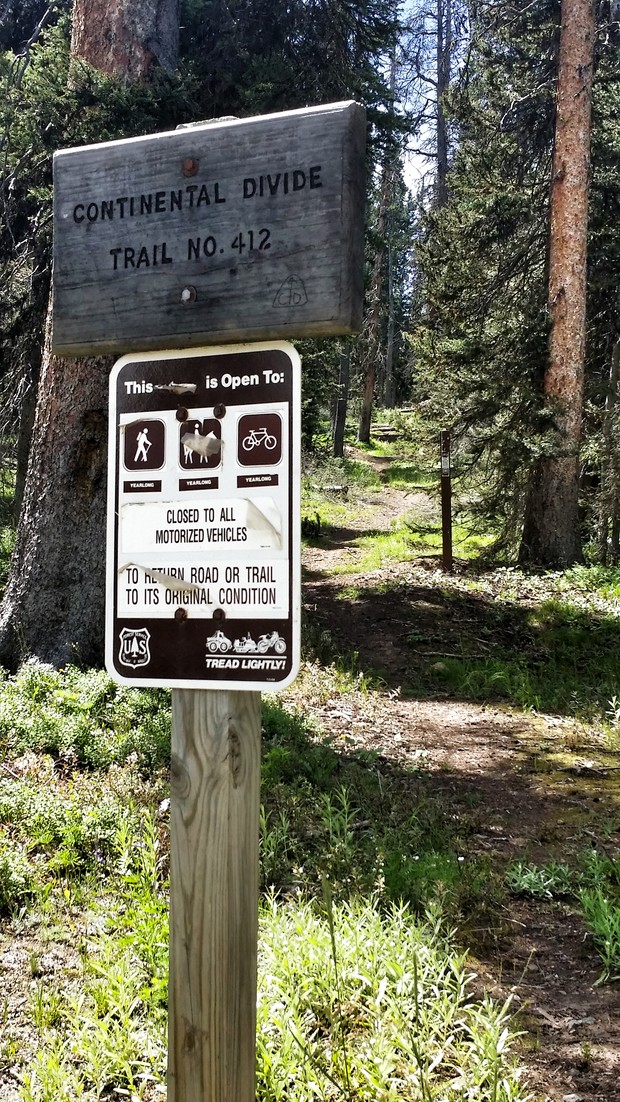