How the Grateful Dead Continue to Inspire TGR

The Squaw Valley segment from Tight Loose, which celebrated TGR's 21st birthday, featured none other than the Grateful Dead's "U.S. Blues".

The crowd at Sullivan Stadium roared when Jerry Garcia’s name was announced. Following his introduction, he began strumming the chords for "Touch of Grey", which only incited additional cheers. It was the summer of ‘87 and nestled in that moving sea of people were three wide-eyed teenagers: Todd, Steve, and Jeremy Jones. Hours before the commotion began, the three of them piled into a car and drove an hour and a half to see their very first Grateful Dead concert. That show was the catalyst. Following that summer day in Foxboro, Massachusetts, they have attended about 75 more Grateful Dead concerts over the years. The Jones brothers are what you’d call OG Dead Heads.

Their passion for the Dead began with the band's fourth studio album Workingman's Dead. Driving to school, their father would play the album alongside some Bob Marley tracks. It didn’t take long for the boys to become intrigued by the music. It also helped that their high school in New Hampshire had quite the collection of Deadheads. Their classmates were always sharing tapes or talking about the next show. But as a couple of big dreamers from Cape Cod, Massachusetts, it was the culture that surrounded the band that hooked them. The adventurous souls that made up the Dead community were the Jones’ kin.

For four years they chased the Dead like they chased winter storms. Concerts brought them all over the country to be part of the traveling circus. They’d pile into their cars, camp, jam to the music, and then repeat. This lifestyle and thrill for adventure would later bleed into their ambitions with snowsports. Teton Gravity Research was founded on many principles learned from the Grateful Dead: ingenuity, creativity, and freedom. Never forgetting their roots, Todd and Steve have quietly paid homage to the band throughout their twenty-three years of filmmaking. Their presence can be felt even in the little things like the titling of our annual snow film. For example titles like Almost Ablaze, Far Out, Paradise Waits, and Further are subtle nods to the Dead.

This year, however, TGR paid homage in the most unique collaboration they’ve done yet. With immense help from Chris Benchetler, Atomic, and Dakine, we’ve created a limited edition run of the Grateful Dead-inspired Atomic Bent Chetler 120 size 184cm skis, Dakine mittens and pack, and new TGR apparel. In light of the exciting and ambitious project, we caught up with TGR Founders—Todd and Steve Jones—to understand the importance the Grateful Dead holds for TGR. Here’s what they had to say: 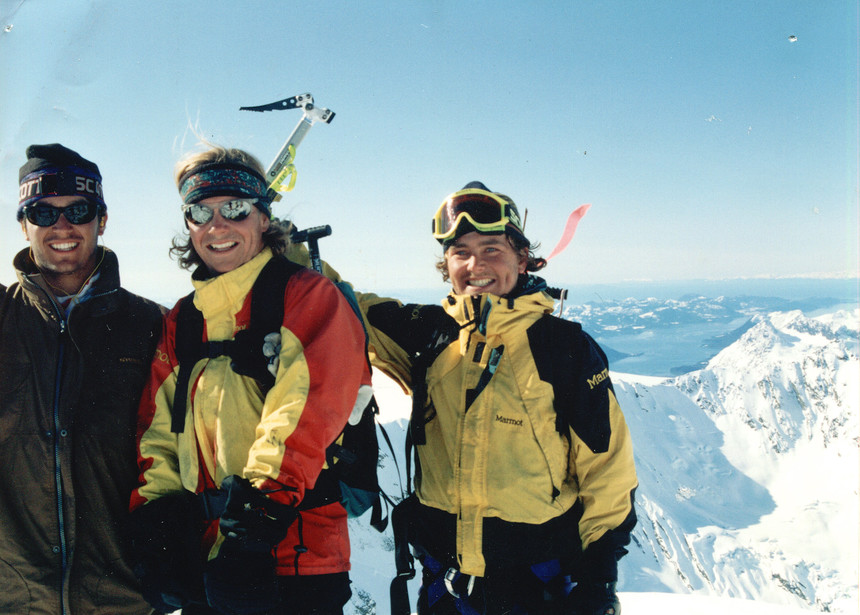 Jeremy, Steve, and Todd Jones circa '95. These were their early days of chasing Dead shows and Alaskan Spines in Valdez before starting TGR. Greg Von Doersten Photo.

Did you appreciate the band more after that concert in ‘87?

SJ: That show gave me a whole new level of appreciation for their music. I remember being so blown away by it that some friends from high school and I drove out west to see more shows. We went to venues like Red Rocks and Telluride, and it was roughly a two-week road trip. Those were much smaller venues than Foxboro—which made it that much more of an intimate experience.

TJ: I was already hooked on them before seeing them live, and honestly I became pretty fascinated by the whole culture surrounding it. We were from Cape Cod, Massachusetts, and they represented this different kind of tribe that we identified with. They wanted adventure and travel which aligns with TGR—I mean those were some of our early days of exploration too.

Eventually, you started chasing after them?

SJ: Yeah a little bit. We definitely tried to catch a part of their summer tour every year. You could camp right at the shows, so it was this really nice contained environment. You’d go and set up a full camp with a kitchen, tents, and we had our bikes—so we’d cruise around.

TJ: We’d go see as many Dead shows as we could and travel with our friends. I loved the music, the attitude, and the whole freedom of everything. I saw shows on the east coast, midwest, west coast—all over. I mean we saw at least 75 shows with the original members of the band.

What’s so special about the music for you?

SJ: The biggest thing for me was the creativity and innovation. You never knew what to expect or where it was going to go. These shows were a journey—and an emotional one at that. They’d take you along the full spectrum of emotions. Sometimes it was pretty weird and almost dark, but then it’d transition and eventually crescendo to these epiphany-esque moments. Seeing the excitement of the audience build with the band would lead to these incredible moments of energy. So, at the base of this, it’s the creativity.

It’s important to understand that at the time the Grateful Dead was really the only band to go out and never know what they’re going to play. Usually, bands stick to a rehearsed setlist, but the Dead did their own thing.

IT’D BE LIKE GOING OUT SKIING WITH FIVE FRIENDS AND GETTING TO THE TOP OF THE LIFT AND VIBING OFF OF THIS COLLECTIVE ENERGY OF WHERE WE WANTED GO.

How does Grateful Dead coincide with TGR?

SJ: The Grateful Dead is very much ingrained with our brand. There’s always been a sense of adventure with them. You’re not just going down the street to go to a concert. Instead, you’re heading out for this epic road trip. Plus, the band is described as being adventurous themselves, for their willingness to take chances and play on a whim.

TJ: Grateful Dead music parallels our style of filmmaking. Our documentary-style projects are just as free flowing as their shows.

THERE’S NO STRUCTURE, BOTH ARE CONSTANTLY EVOLVING AND CHANGING AS IT GOES. I THINK OUR FILMMAKING IS VERY SIMILAR.

We start with a general idea in the field, but usually have to go with the flow and follow where the journey takes you naturally. We just bring that together with a story, instead of music. 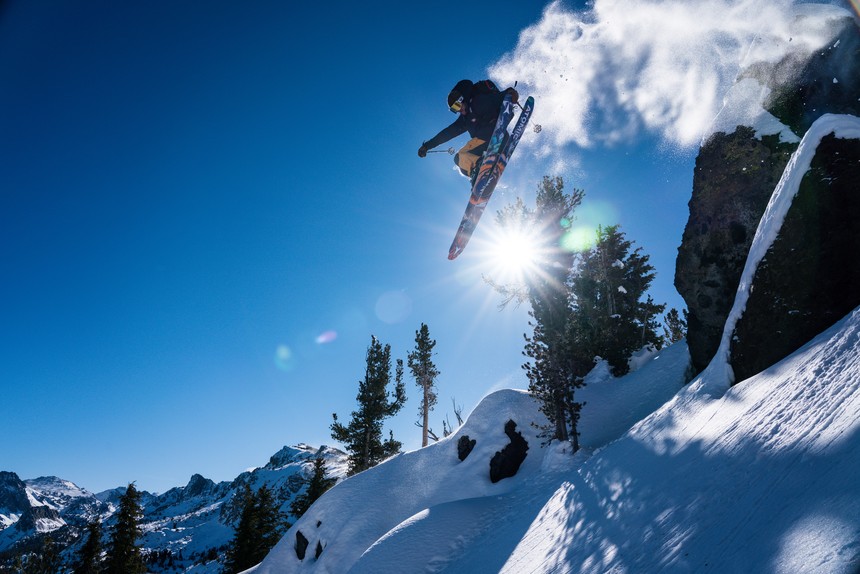 The new skis send just as hard as the regular Bent Chetlers—and they have Chris's custom Grateful Dead flair.

What have you learned from the band?

TJ: From the standpoint of a business, if you look at the business of the Grateful Dead they were always very true to what they believed in. They didn’t bend to what was on the top 40 charts or what other people wanted from them. They’re iconic because they always remained true to themselves and their fans. That’s something we’ve always wanted for TGR.

Why are they still relevant today?

TJ: I’m sort of baffled because when we started TGR we were given some shit for being Deadheads. It wasn’t really cool, you saw more of a punk rock influence in action sports. About ten years ago I started seeing people doing things with the Dead and also heard of athletes like Danny Davis, who's super into the Dead. They were excited to know that we were also Deadheads.

Honestly, we just stayed our course and it became cool again. We were never chasing a trend, much like the band itself. It’s funny that it came full circle. Now there’s this new fan base that wasn’t even born when Garcia was alive—it’s fascinating to me. I’ll meet some young fans and they’ll say, “you saw Garcia!?”

It’s just a testament of the band and what they stand for, which I think really appeals to these younger fans. 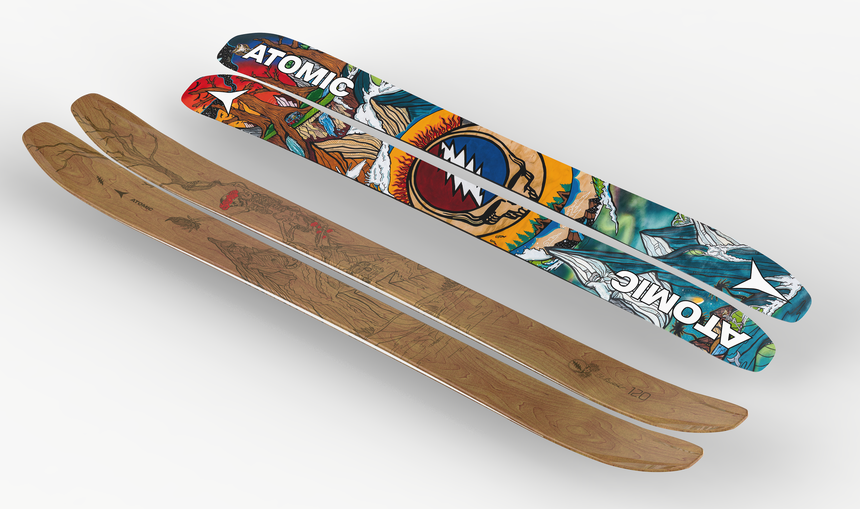 Benchetler's artistic touch can be felt on both the top sheets and bases of the limited edition ski paying homage to the band. Atomic Photo.

What excites you guys about the recent ski collaboration?

TJ: The story behind that is pretty wild. Before Brian Francis, our Director of Apparel joined TGR, he reached out looking to do a Grateful Dead collaboration with us and another brand. He asked me who I would recommend, and it was a big ask. I starting thinking about who to reach out to, and it didn't make sense with a small boutique brand. Atomic was already a big partner of ours, but we weren't sure how it would be received by the Austrians since they don't quite know the culture.

But then I had this aha moment with Chris Benchetler while I was down in Mammoth for the Generation Bent Chetler shoot. Benchetler was playing guitar and we were singing Grateful Dead songs. The light bulb went off and I realized that Benchetler controls the art on his skis...he's into the Dead...this could be the way to do it. I texted Benchetler about it and he immediately got back to me.

SJ: It’s just such an appropriate project to be collaborating with Benchetler on. He’s got such an artistic side to him—especially when he’s skiing. His innovative and playful approach is so evident when you watch him ski. It’s really serendipitous how it all came together, and it’s cool to see how Atomic and Dakine were willing to jump on board with the concept. We’re having and fun and pushing the boundaries of what our brands are.