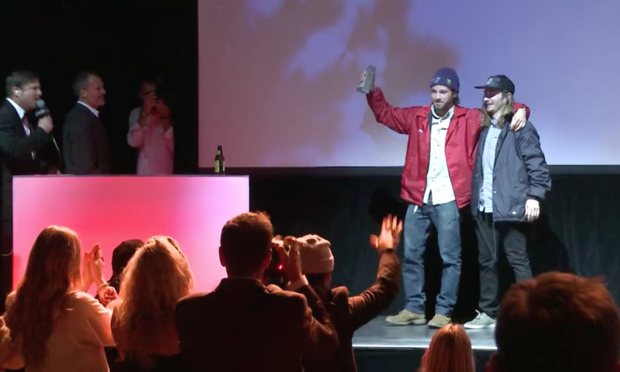 This year marked the 16th Annual Powder Awards. The event brings the top skiers in the world together for one night to celebrate each others achievements, and above all the sport of skiing. We at TGR are incredibly honored and humbled to work with such talented athletes, cinematographers, editors and people in general. It wasn't a bad night as TGR took home 8 Powder Awards in total. Here is a recap of the event below.

This year we lost one of our favorite, most caring, compassionate members of the TGR family. So it was a special moment when Sage Cattabriga-Alosa and Ian McIntosh went on stage to accept the Powder Poll Award for Erik Roner, the first time Roner had been honored in the poll. The pair kept it optimistic, saying their friend would want the crowd to celebrate, not mourn his life.

One of Roner's hero was the late Bruce Lee. McIntosh left the crowd with one quote from the kung fu icon, "the key to immortality is first living a life worth remembering." Ski in Peace Roner, we miss you! 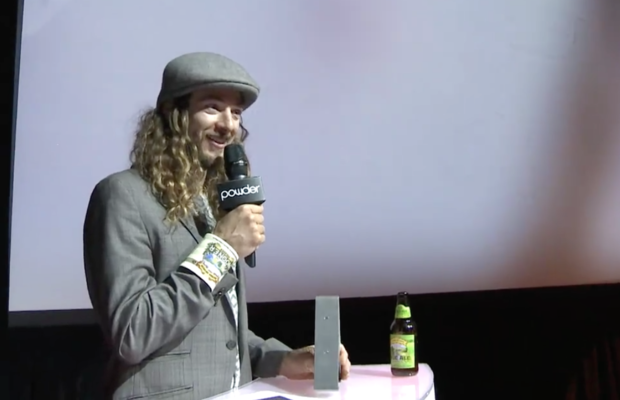 Sage Cattabriga-Alosa might be the most universally loved and admired skiers in the industry. What he has been able to accomplish in his career, and the way he has gone about it, is an inspiration for countless younger generations. This is explains, probably, why he took home first place in the Powder Poll, the only fan voted award of the night.

I remember watching an early cut of Paradise Waits, turning to another co-worker, and remarking "holy-shit, Sage put together a hell of movie." Apparently the panel at the Powder Awards felt the same, awarding him his fourth Best Male Performance. It took Sage by surprise, as he remarked that he was in the middle of a conversation and had no intention of winning.

It is a true honor to witness something historic. This took the form of Angel Collinson claiming three pieces of hardware at this year's Powder Award. These were for top spot in the women's Powder Poll, Best Female Performance, and for Line of the Year. The Line of the Year was truly impressive as she was the first female both to get nominated and win the award. I was able to catch up with the charger from Snowbird after she received her third award of the night.

TGR: What is going through your mind right now?

Angel: I don't really know. I think it is so cool (Ian McIntosh walks by and shouts “good game out there!”). Just all the ways the TGR family has been so diverse with all of our talents. I just am really honored and stoked to be part of all of it. I am especially grateful for the Jones brothers, for believing and enabling all of us.

I think this is the strongest throw down that the Powder Awards has ever seen from women. It is so cool to be a part of all these talented ladies. Like I said on stage with so many women in Alaska last season it was truly mind blowing.

TGR: Thoughts on next season?

Angel: I don't know. I want to go eat some donuts and think about it.

Cam Riley Gets Recognized for Being Batsh*t Crazy

Cam Riley took home the Full Throttle Award, given to the skier who went absolutely batsh*t insane last season. I'm sure hucking off of five-story parking garages had something to do with it. We talked to Cam about his win.

TGR: You talked about recognition from the ski community at large, what does this mean to you?

Riley: We couldn’t be more happy just about being recognized on the same level with the rest of the skiing world. Powder Awards is a prime example, I mean “powder” awards. You can’t say any better. When you get respect from these guys that means the ski industry as a whole, its truly unreal.

Cam Riley, Clayton Vila, and Sean Jordan showed just how difficult it is, both mentally and physically, to be an urban skier in their documentary For Lack of Better. The raw, unflinchingly honest reflection resonated heavily with the folks at Powder Awards, as they took home awards for Best Documentary and Film of Year. Still in shock about the recognition from the industry with talked to Clayton Vila about the win.

TGR: Film of Year! What are you feeling right now?

Vila: I always thought that being speechless was a thing that you said because it sounds cool, but I really have nothing to say.

This is such an incredibly prestigious event, we have had nominations here in past, and won awards, but we never expected this type of recognition, to be put on the same level as incredible movies and skiers. The big mountain skiers to be honest... we put them on another level. I think it just took the extra level of explanation that we added to a documentary style feature to really show the world what we do.