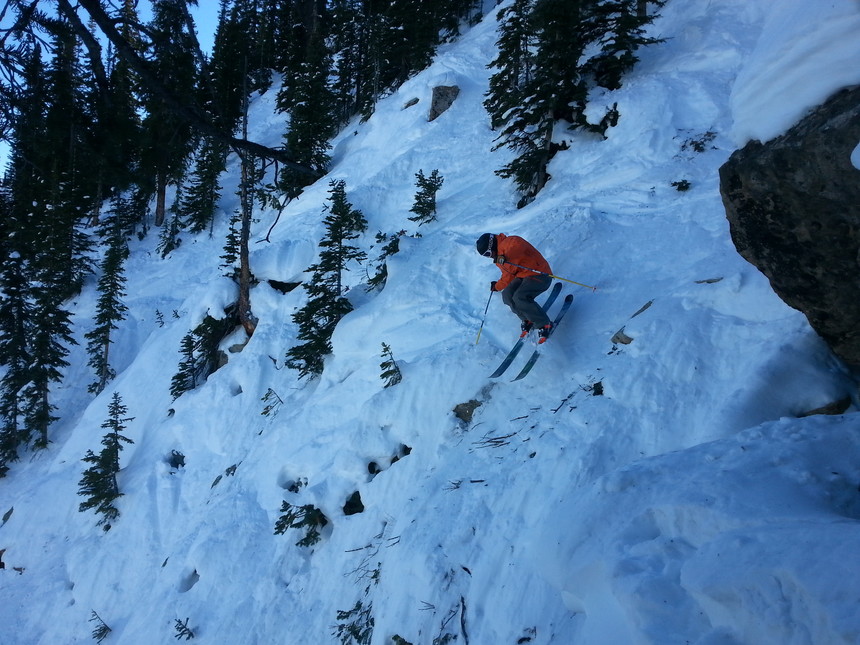 To experience Crested Butte’s most sought-after steeps, you’ll put together what locals call a big lap, or a super lap. Roughly 2,200 feet long, these laps combine a line off of the High Lift’s mostly alpine, north-facing terrain, a shorter but technical shot off of the T-bar, the North Face Lift, and a run to the bottom of the resort where’ll you load up on the Silver Queen and do it all over again.

Here are the laps we think you can’t miss.

Off the High Lift 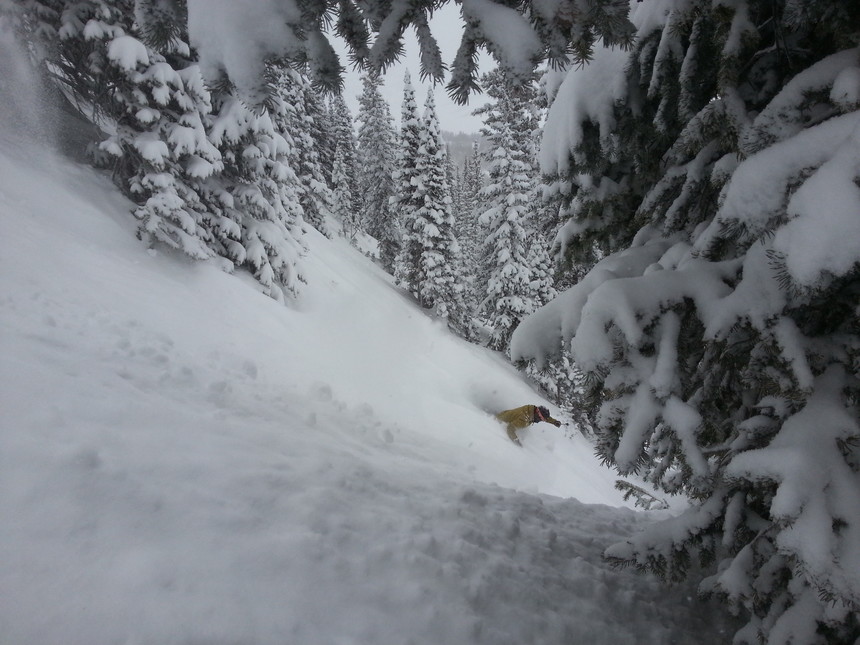 “Big Chute is awesome because a lot of people go past it,” says Will Dujardin, Head Freeride Coach at CBMR and Co-founder of the West Elk Project. “It’s underrated.”

Arguably one of the most visibly prominent runs at CBMR, it’s a continuous fall line down a natural chute. Crested Butte Mountain Resort athlete Mark Mikos calls Big Chute his go-to for a first run of the day. “It has perfect pitch,” he says, “with ridges and knobs you can pop off of.”

The gut, Dujardin points out, always gets skied first, leaving stashes on right and left side. Depending on season and how snow fills in, he adds, it has two chokes. The first is kind of tight, just wider than your skis on low snow season, he says. The second, he adds, has a quick double. To skiers left of the second choke, he adds, is a cliff band is called Little Rock with airs between 5 and 15 feet.

(Pro tip: Download the CB Extreme App for free maps to guide you through the Extreme Limits terrain at Crested Butte Mountain Resort. More info about the app at the bottom of the page.)

To start an ideal big lap, Crested Butte Mountain Resort athlete Rob Dickinson recommends dropping into the Headwall. When you can come up over the upper triangle of the Headwall, it crests over like a convex, Alaska-style rollover, he explains. From there, he likes to head right and roll into Angle Gully, which Dickinson explains is “kind of a hot step, real technical, with a lot of rocks right at the surface that still skis smoothly.”

Angle Gully, he says, tightens up into upper choke, a little area where you have to pick your feet up and commit. When you land, he adds, “you’re going.” The line flushes out into a nice little choke with airs to the right. If you hit them, Dickinson warns that as soon as you land, you’re nuking into moguls. If you don’t, he says, tighten up and point it into the choke and down the apron of the Headwall.

After you’ve descended the Headwall, Big Chute, or another storied steep face off the High Lift, make your way to the North Face Lift to continue a super lap. 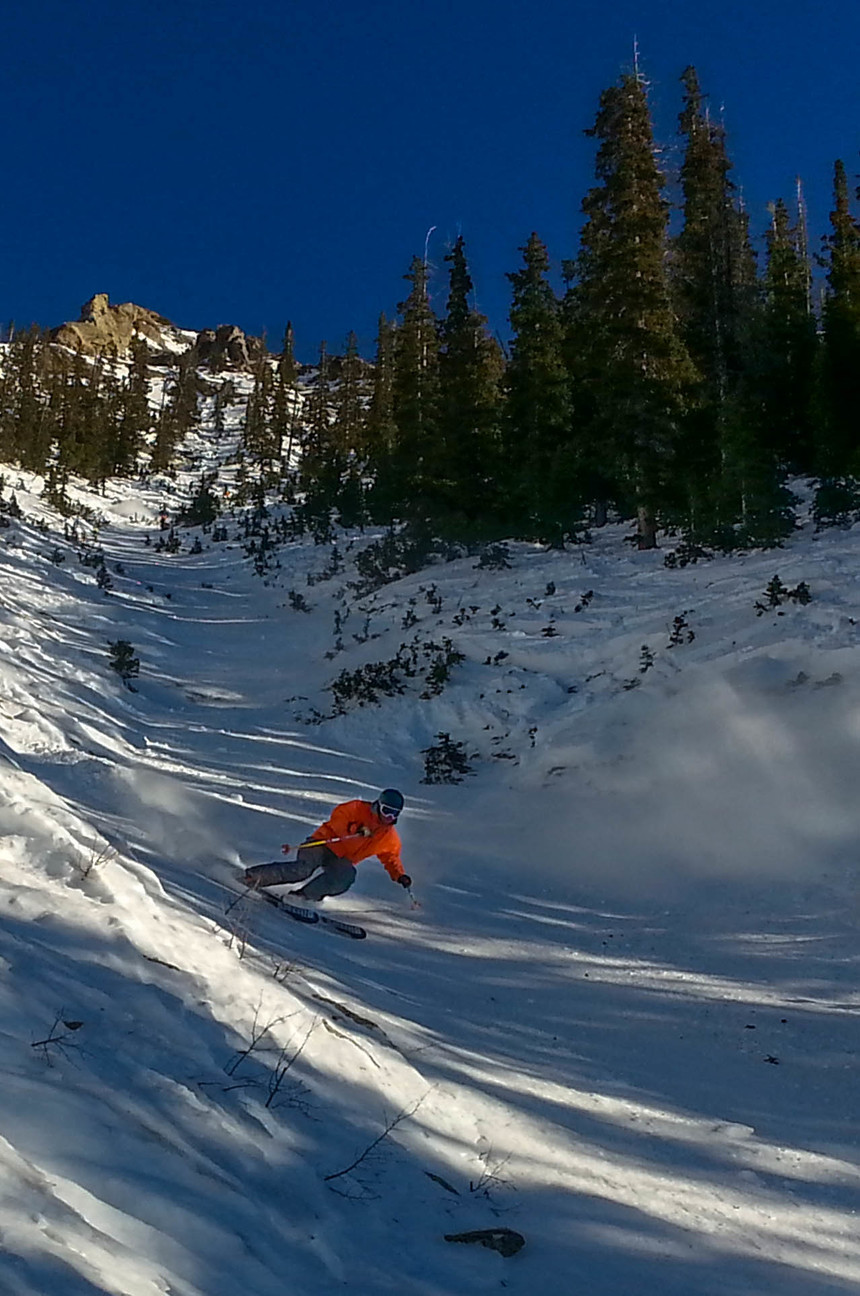 Unlike big laps, which require a T-bar ride to complete, The Peak is the only true top-to-bottom run that combines classic Crested Butte terrain: high alpine, open faces, steep-as-hell chutes, tight-and-steep-as-hell trees, and cliff bands. From the Peak down the Banana, Peel, or the Funnel, it’s about 2,500 vertical feet.

Mikos explains about the Peak: “It takes the right kind of wind--that’s the biggest factor up there. All the snow gets blown off, but the right wind direction loads it in.”

“I love the Peak because it’s a different world up there,” he adds. “You can stay in high alpine if you drop from Peak to Peel. Then you can dive back into the trees and hit Banana and Total Recall (the face between chutes that has a perfect 50-degree face loaded with cliffs).”

Off the North Face Lift 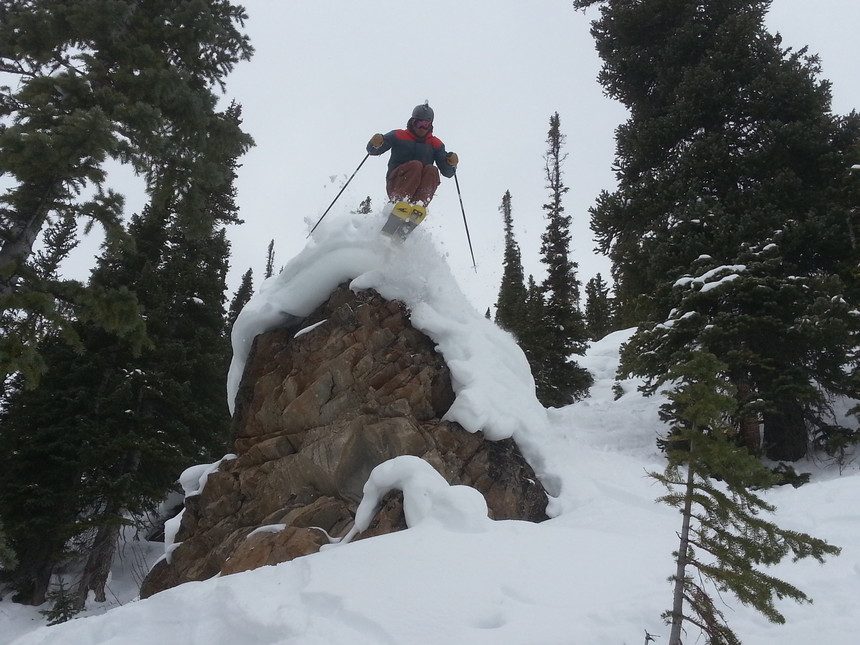 Another shot of Rob sending it in the staircase. Tom Runcie photo.

Bill Dowell, Director of CBMR Ski Patrol, explains that Crested Butte has full-on technical terrain, which increases in difficulty the farther out you go from the core of the ski area. He recommends dialing in your kick turns and being committed to hiking to a line and, in some cases, out of it, too. This is especially true in the terrain off of the North Face Lift, where things get hairy if you lose your bearings.

Spellbound Bowl sits on top of the comparatively larger Phoenix Bowl, offering little pockets of technical terrain within the trees. The entrance requires a traverse, with sidestepping. That said, Dujardin points out that it’s still easy to check things out in Spellbound, and sidestep out of an area where you’re uncomfortable.

“I like to go out further on that traverse to this zone called East L.A.,” says Dujardin, “where there are bigger cliffs. It all funnels into this bench that marks the difference between Spellbound and Phoenix.”

Here, Dujardin says, it’s important to look around, and scout the area. If you head skier’s left, you’ll reach the no-fall-zone Dead End Chutes and, past them, a series of steep, technical chutes. This zone includes the chute, Body Bag, where Crested Butte hosts big mountain competitions. Be aware that cliffs in this area range from 15 to 60 feet. You should be comfortable making 5 to 10-foot vertical drop hop turns and sending a 20-foot air, Dujardin recommends. 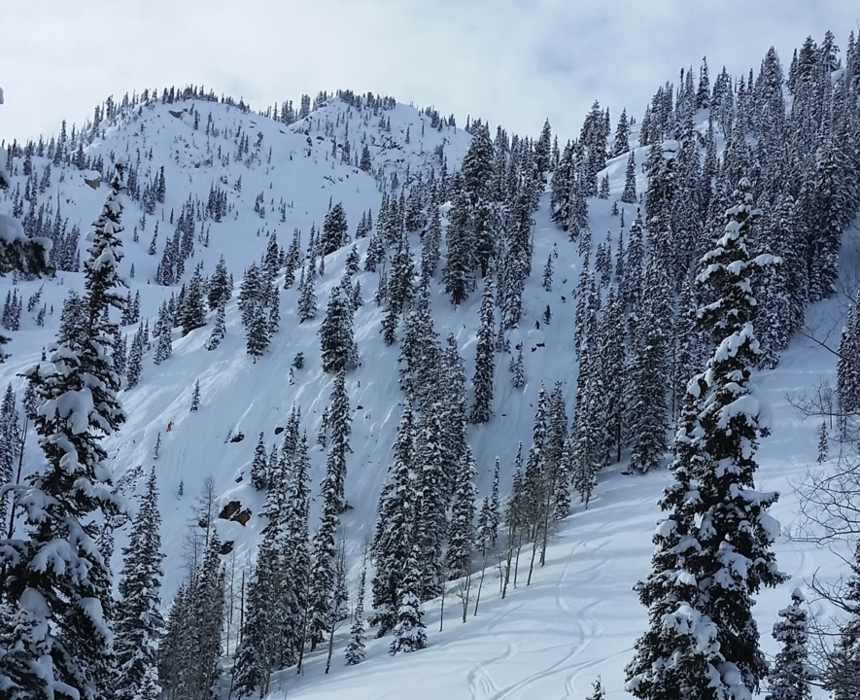 Look closely and you'll see Jack Weise (yellow jacket) looker's left tipping into his line. Rob is on top of the big cliff in Body Bag (closer to looker's right) with his wife, Sydney, skiing down behind him in the turquoise pants. Laurel Runcie photo.

Below this series of challenging, technical chutes is Staircase, a steep, 800-foot-long chute. Rob Dickinson points out that even visiting professional skiers can be scared by the landings they find here, which typically include trees, rocks, and bumps.

Compared to skiing at Squaw, Jackson, or Snowbird, Crested Butte doesn’t have a bounty of big cliffs with long, wide-open runouts. Instead, Dickinson says, “We have scariest 10-footer you’ve ever seen.”

Mikos likes to take a little bit of a different approach from Spellbound Bowl to Staircase. He explains, “Probably my absolute all-time favorite line is skier’s right side of Fredo’s, then get on No Wive’s Traverse, which wraps around ridge. Before the entrance, drop to left, and enter None’s Blank. There’s a cornice drop into a hanging snowfield, which leads into a pillow zone called The Edge.”

Then, Mikos adds, you go through wide-spaced coniferous trees, and end up at top of Staircase. 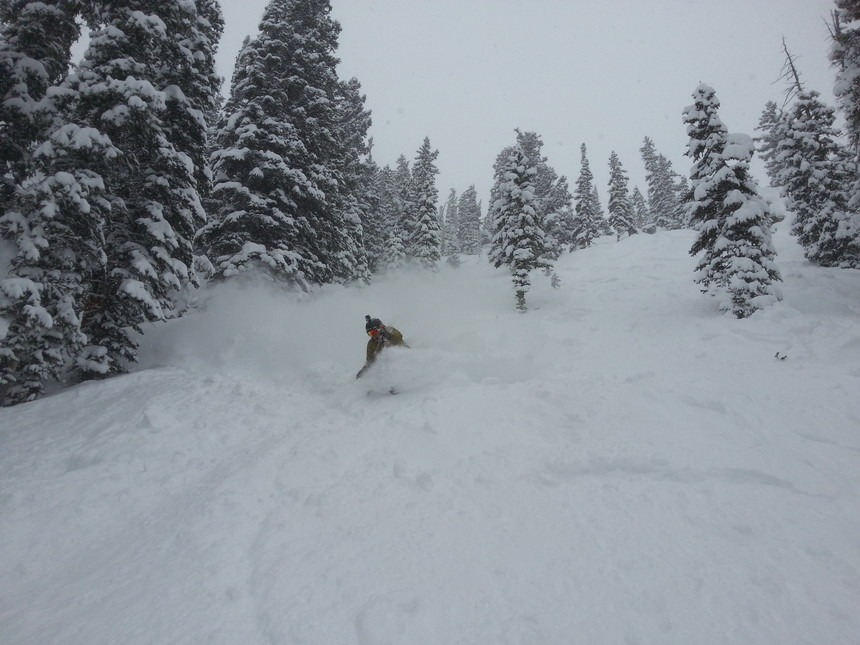 “A treasure at Crested is area where you can let your skis run. Phoenix Bowl has that,” Dickinson argues. It has lines that are tight and steep, but relatively easier skiing that any expert can ski their way down.

To ski into Phoenix Bowl, he says, traverse right at the bottom of Spellbound Bowl and drop in. The wind buffs the snow in the area, giving it almost a groomed consistency. Stay right, which will put you on top of Phoenix Chutes.

Dickinson explains that you’ll ski an off-camber, double-fall line pitch, and then choose between two gun barrel shoots. The right hand chute borders Hour Glass, a famous competitive freeride destination. To the left is a tree chute. When the two chutes converge, the terrain is still technical, full of trees, pillows, and moguls.

To avoid the Chutes, Dowell recommends riding the bowl proper, which features 10-15 acres of open, 35 to 38-degree terrain. 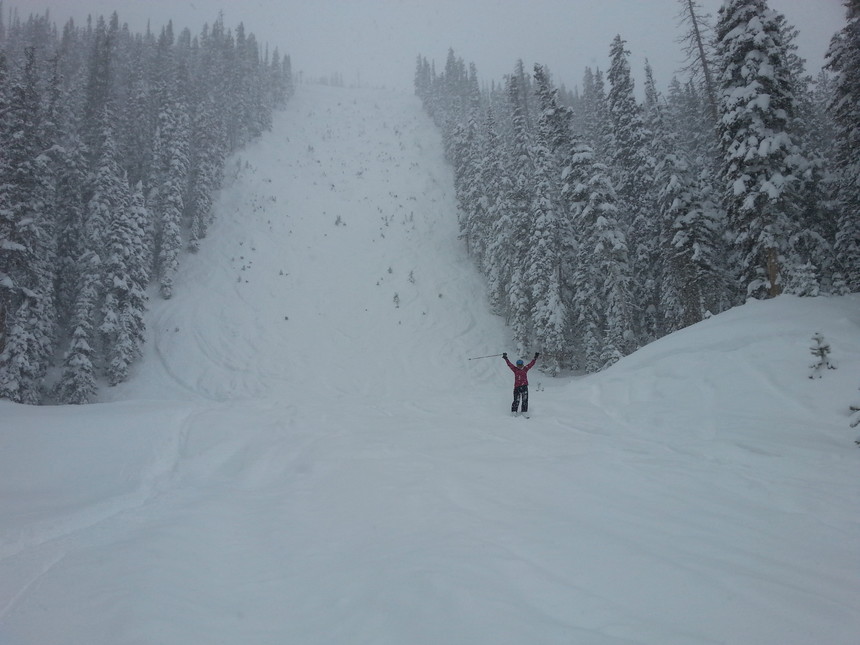 “Rambo is a staple at Crested Butte,” Dickinson says, pointing out that locals ski it all the time regardless of snow conditions. There are two ways to get into the steepest-cut run in the U.S., Dickinson explains: right off the catwalk, the infamous spot where people look over and throw up in their mouth a little bit, and a locals-only access point the in trees called the Keyhole.

“Rambo is always something you look down and think, even if it’s open, that it’s not skiable,” he says. “It’s kind of like Crested Butte in a nutshell: You need to learn to see the opportunities instead of obstacles.”

Aside from how steep and continuous the fall line is on Rambo, exposed saplings blanket the bumped-out run. Be prepared to make quick decisions and aggressive jump turns as you avoid getting tripped out. Side bonus: these zombie fingers also help this insanely steep run hold snow after a big storm.

Check out Crested Butte's new CB Extreme App. The app has free maps to guide you through the Extreme Limits terrain at Crested Butte Mountain Resort. Every crevice, rock, and tree on this vast mountain has some sort of name, official or not. CB Extreme will ensure that you never get lost.

CB Extreme was created by GoMaps and works off of the GPS signal on your phone so even without cell service, you can determine where you are on your downloaded maps. GoMaps created the App by georeferencing the only existing maps of Crested Butte’s extremes, “Extreme Limits Guide” by long time locals Greg Payne and Sandra Cortner. The old map is basically aerial photos with trail names added to it. The GPS signal on your phone now will translate into a position on the photo map within the App.

Crested Butte Mountain Resort was a pioneer in opening inbounds extreme terrain. In 1992, Crested Butte hosted the Lower 48’s first extreme skiing competition. When the North Face terrain was opened up, the resort was really pushing the limits of what ski areas were allowing guests to ski on. When questioned about the danger, the communications VP at the time, Bob Gillen, was quoted as saying, “Well, it’s not like we’re taking skiers out of there in body bags!” The patrollers naturally grabbed onto this quote and Bob had two runs named after him: Dead Bob’s Chute and Body Bag.

Watch the NOAA forecast. Like all steep resorts, Crested Butte needs significant snowfall to open up its extreme terrain.

Buy the Extreme Limits Ski Guide, by Greg Payne and Sandra Corner, at The Alpineer at 419 6th Street.

Visit the West Elk Project. For additional beta, photos, and POV footage of particular lines, use the search engine.

Check in with Creste Butte ski patrol to get up-to-date information about terrain openings, closures, and avalanche conditions.