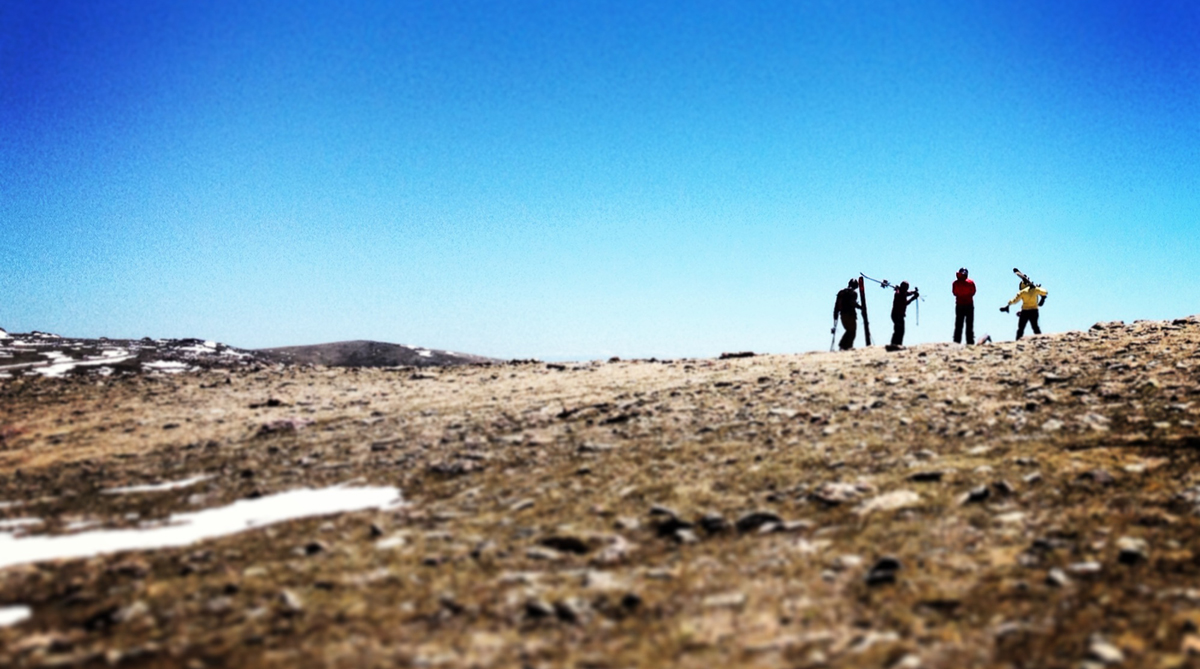 Salt Lake City—An alarming new study has sent the ski industry into a frenzy after announcing that backcountry skiing and snowboarding have caused dramatic increases in global warming.

The study, done by an international group of climatologists, has discovered that the amount of “Airborne Shit” spewed into the air is rapidly escalating due to the growing number of backcountry users that are taking to the slopes.

“Airborne Shit, or ABS is a byproduct of backcountry skiing,” says climatologist George Towns. “Whether it’s some revelation in the skin track, a daily vertical claim, or even talk about the snowpack, it all contributes to an incredible amount of ABS. It clouds the atmosphere and doesn’t let heat escape.”

Towns discovered the correlation shortly after the advent of modern tele gear. “When SCARPA introduced the Terminator in the fall of 1992—the first plastic telemark ski boot—we were finished.”

“That’s why I still use leather boots,” claimed telemark skier Donald “Quaker” Oats as the ABS avalanching out of his mouth emptied out a local used backcountry gear store in Missoula, Montana. “I’ve been skiing backcountry for at least three years now, and I just feel like the original gear is still the best way to enjoy the mountains.”

But telemark skiing isn’t the only culprit. “It’s even easier to pinpoint in recent years,” states Towns. “Let’s look at the largest winter the West has seen in recent memory, 2010-11. Telemark was dying the year before, there was only one reliable frame-style binding on the market and it wasn’t that good, and everyone was afraid of Dynafit.”

“It snowed and backcountry gear sales skyrocketed,” points out Towns. “The following winter was one of Colorado’s warmest. Fires ravaged the state. Colorado only saw a late comeback in winter this year because the majority of backcountry users had just plain given up—restoring normal weather patterns.”

“I just plain quit skiing in February,” admits Boulder resident and REI cardholder Xander Phillips, originally of Connecticut. “The weather was just so wonderful here on the front range, so I got out my mountain bike. When the snow returned this spring I still managed to log fourteen powder days, it was EPIC!”

According to climatologists, the two-month surge in usage of the word “EPIC!” is responsible for the wildfires that are currently decimating the state.

Secondary factors have also acted as catalysts in the current shit storm, according to Towns. “It’s almost as if society as a whole is embracing this—the proliferation of microbreweries, social media, and the TGR Forums has led to an abundance of cesspools full of backcountry-generated ABS.”

One ski binding engineer who wishes to remain anonymous claims he was aware of the correlation from the beginning. “We designed the bindings to be heavy on purpose, hard to operate, and prone to getting jammed with ice. We knew they would sell, but we hoped that they would frustrate people enough to stay out of the backcountry. I just hope we can fix this.”

Moves are already being made in the ski industry to work towards a sustainable climate. Jeremy Jones, a leader in addressing global warming, has announced that the name—and concept—for his next film has changed. Higher is now Jibber, and will exclusively feature the other Jeremy Jones. Dynafit has stated that Brody Leven will have to pick his park game back up, and Black Diamond is closing its doors permanently just to show that they care about the environment more than anyone else in the industry.

So what can you do to fight global warming? Here are Ketchup Soup’s guidelines for bringing winter back: