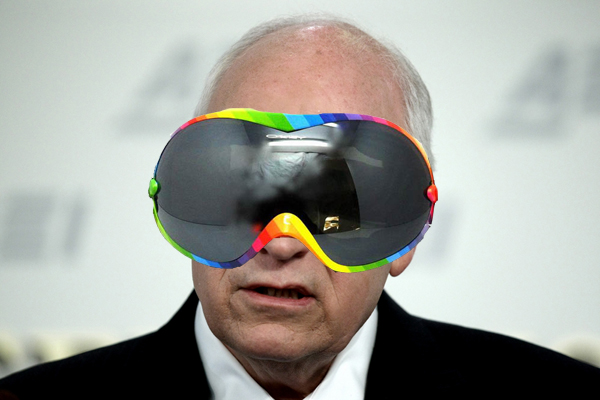 WASHINGTON—The Unites States National Security Agency announced today that the world’s most complex wiretapping network, the PRISM surveillance program, has nothing to do with preventing terrorism.
“The project was put in place by former Vice President Dick ‘Poacher’ Cheney,” states NSA Spokesperson Leopold Ancarliss. “He loves skiing. His problem is that no one will tell him where good snow is.”
Cheney, an avid skier and fortress owner in Jackson, Wyoming, allegedly has a hard time finding people to ski with. “I don’t think it’s me that people aren’t connecting with,” hisses Cheney. “But a lot of the secret service men tend to scare people off because they smell like hookers. By scanning people’s calls, texts, emails, and social media, I can get a real time look at where people are shralping all that pow. I’m retired now. Drop cliffs not bombs.”
“Let’s be honest for once,” gargles Cheney. “Skiers can be more secretive than terrorists. It might take weeks for them to lay claim to a line. I don’t want to watch your stupid edit. I want to ski your snow.”
The rising popularity of cell phone use while skiing first prompted Cheney to start collecting information. “It was hard at first, because it wasn’t cool to have a phone on the slopes,” screeches Cheney. “But then came Instagram. Now all we really have to do is keep an eye on anyone who uses #athlete, #stoked, #freshies, #sopitted, #POW or #whitenoising.”
Cheney admits that if it wasn’t for #latergrams, he would have scrapped the program.
Most Jackson residents aren’t surprised. “It makes sense,” admits area resident Nathan Smith. “Dick Poacher and his hoard of guards have been swarming stashes storm after storm for the last few years.”
The problem has gotten so bad recently, that Smith has even coined a phrase for it.
“Any time a stash get’s shredded, we say that the place is ‘Cheney’d Out.’ They are like locusts, stripping the life right out of a zone. It’s terrible.”
In light of the recent news, Ancarliss says that most citizens don’t need to be concerned. “If you’re not out there shredding face, we’re not watching you. Besides, it’s been years since Cheney has shot anybody.”
Ketchup Soup’s tips on keeping your stash from getting Cheney’d Out: