When the Winter Olympics roll around, Lake Placid's stock rises. Surrounded in upstate New York by the vast 6-million acre Adirondack Park, the old-world town hosted the 1932 and 1980 Winter Games. Today, it causes visitors to salivate and give some of these Olympic sports a try. 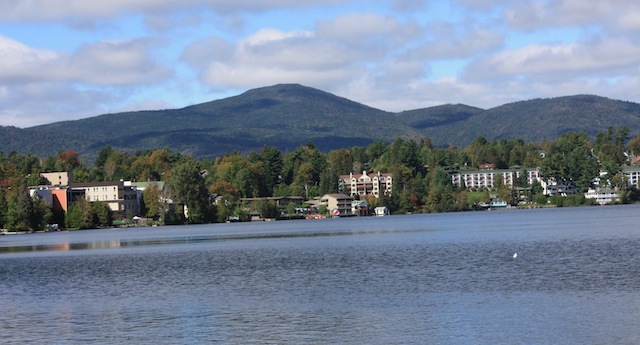 Nowhere else in the East can you live out these Olympic fantasies. At the Olympic Sports Complex, you can pound down an actual icy track in a bobsled with a driver and brakeman, or take a shot at being a biathlete on the range. At the Olympic Jumping Complex, ride the elevator to the K-120 meter jump for an eagle-eye view of ski jumping. Visitors tend to leave with a newfound respect for wingless flight. Afterwards, venture indoors to the Olympic Center and the Lake Placid Olympic Museum to learn how the town captured the games twice while getting teary about the U.S. Hockey Team's incredible “Miracle on Ice” 1980 victory over the Soviet Union. 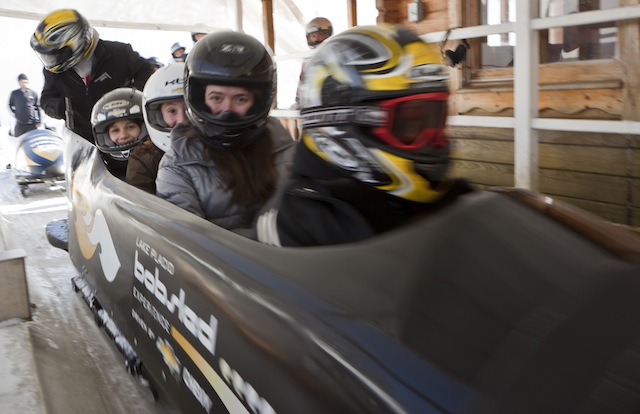 Lake Placid is the place to try an Olympic sport like bobsledding. Photo by ORDA/Dave Schmidt.

Outstanding as that all is, it is the mountains that call. New York's impressive High Peaks—with 46 scaling four-thousand feet or higher—command the Lake Placid-Keene Valley region with 5,344-foot Mount Marcy, the highest peak in the state, towering above everything.

For a 6-plus mile round-trip workout, climb 4,580-foot Wright Peak (the area’s 16th highest peak). In addition to its views, the peak sports a waterfall and B-52 bomber wreckage, which stems from a plane that crashed in 1962 due to high winds. Take it relatively easy with a 3-mile loop up to Mt. Jo's sweet views or drive a couple miles along Route 73 for a 3-mile ramble on knobby Pitchoff Mountain and its Lake Placid vistas. 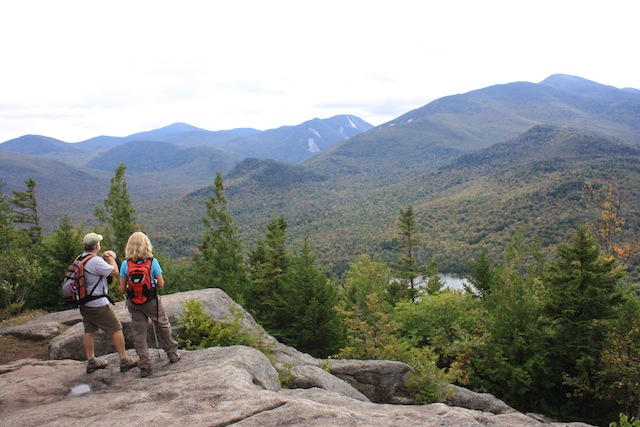 The cycling is also excellent along Route 73. Locals laud the tough, but scenic 56-mile road loop used in the annual Ironman competition. In addition to featuring 2,400 feet in elevation gain, the route includes a meandering stretch through the jaw-dropping Wilmington Notch along the Ausable River. Cyclists can also choose from a varied list of rides compiled by Placid Planet Bicycles. In summer, mountain bikers use the fee-based trails at Whiteface (which can also include lift service) and Mt. Van Hoevenberg (which offers cross-country skiing in the winter). Currently, the nonprofit Barkeater Trails Alliance is working to unite many regional trails. Thumbs up go to the Flume Falls system, a 10-mile network off Route 86 in nearby Wilmington with a myriad of marked opportunities from mellow dirt to steep singletrack. 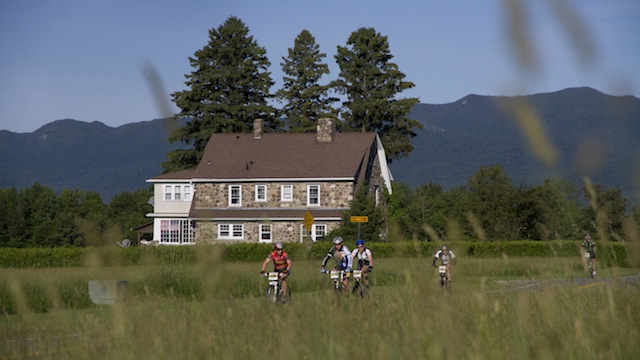 Both on the road and along the trails, cyclists have miles of riding opportunities around Lake Placid, New York. Photo by ORDA/Whiteface Lake Placid.

Paddlers don't have to go far to make a splash. There's the calm, quiet water of Lake Placid and Mirror Lake. These lakes offer seemingly endless reflections while the whitewater in the Ausable and its branches serve up the wild. Guides and rentals are available in town.

When the snow flies, state-owned Whiteface Mountain in Wilmington takes frigid center stage. The ballsy 87-trail mountain sports a vertical drop of over 3,400 feet—the largest of any ski area east of the Rockies. Phil Mahre captured a slalom sliver in the 1980 Winter Games here and it's where 2010 Vancouver Olympics Super G bronze skier Andrew Weibrecht grew up. The views are solid—showcasing the Adirondacks and Vermont's Green Mountains. The runs are also solid when the wind whips.

Cloudspin and Skyward are thigh burners off the top while the gondola to Little Whiteface services scenic cruisers like Riva Ridge. At Lookout Mountain, the Wilmington Trail at two miles is the longest run. But adrenaline junkies wait for ski patrol to drop the ropes on the natural chutes and bumps of The Slides.

After playing, head to the charming downtown and enjoy the mountains reflected by Mirror Lake. Main Street is a magnet for locals and visitors alike, filled with restaurants, bars, shops, outdoor stores, and places to stay. 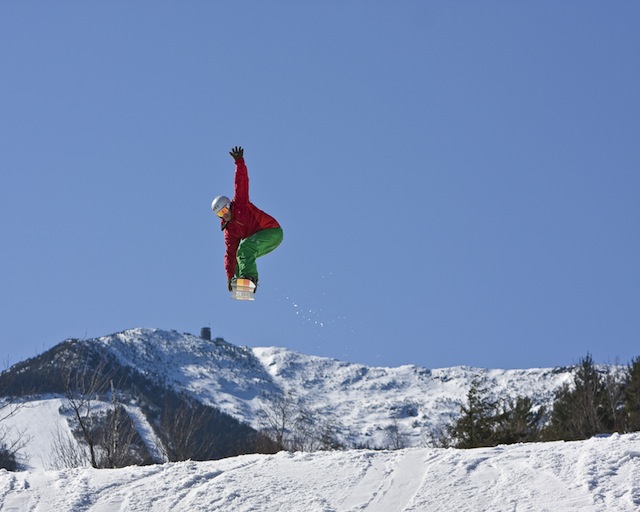 Whiteface Mountain in nearby Wilmington, New York contains the most vertical in the East. Photo by ORDA/Dave Schmidt.

Ready to bed down? If you're still feeling rugged, head to the ADK Wilderness Campground at Heart Lake by the information center with its sites, lean-tos and canvas tents. The 1927-built Adirondack Loj is there too. If you're just looking for basic digs, a shower and like-minded travelers, the High Peaks Hostel on Sentinel Road and TMax-n-Top's Hostel on Cascade Road are budget-conscious selections. The Hampton Inn—with its new lodge-like facade—on Mirror Lake Drive has good views.

In Lake Placid, you won't go hungry. All-day breakfasts and home-style cooking make the Downtown Diner a local haunt (just bring cash, as it doesn’t take credit cards). Treat yourself to the Abbey Ale barbecue at the Great Adirondack Steak & Seafood Co. and wash it down with a Great Adirondack Brewing Co. selection. Saddle up to The Cowboy, formerly the Caribbean Cowboy, for a casual international gallop 'round the menu from the heralded jerk chicken to Thai green curry shrimp and clams. 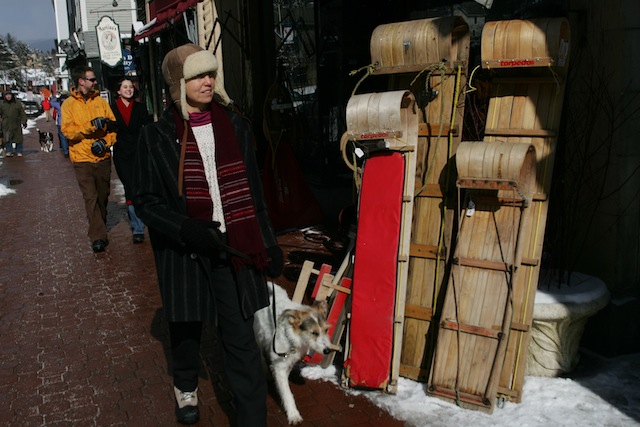 Take a break from the trails and slopes with a downtown stroll. Photo by Lake Placid CVB.

Party on with a High Peak happy hour at Zig Zags, a Main Street staple with drink specials, live music, bar games and the bobsled out front—a constant reminder that the town is an Olympic village. Choose a local brew like strong Ubu Ale or hoppy 46'er Pale Ale at the lively Lake Placid Pub and Brewery (good food too) on Mirror Lake Drive. Its three floors serve up a mélange of tasty atmospheres from Irish flair to the fresh Hop Loft opened last winter.

Whether hitting the slopes, exploring the trails, or grabbing a brew, Lake Placid has no shortage of things to do. And, in its own way, each adventure makes the podium in this gold medal town.