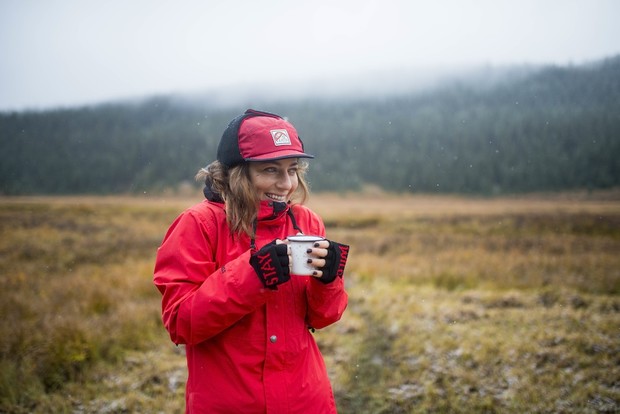 Leanne Pelosi has been pushing the limits of women's snowboarding for over a decade. She's also the visionary behind Full Moon Film. We picked her brain about how she approaches big lines and why she thinks it's so important for women to be filming in the backcountry. Here's what she shared.

#1: How does a line attract you? Are there particular features you tend to like and go for? 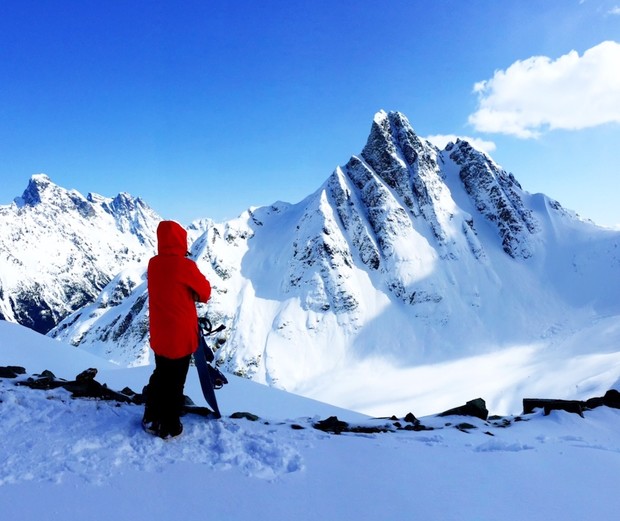 I like to look at a line and usually pick out something with one thing to focus on. I love pillow lines, although getting them in good conditions is particularly hard because usually there needs to be a fresh dump on them.

Something to pay attention to is whether a line is convex or not. It’s always completely different being on top of something, and its really easy to get lost if there’s a convex roll in there. When you’re riding a line for the camera there really needs to be no hesitation, or it shows and you blow a shot. So I try to pick something I know I can do with confidence and have fun with it.

#2: Can you talk about how this line choice process differs when you're in a heli vs. the sled vs. hiking up something? 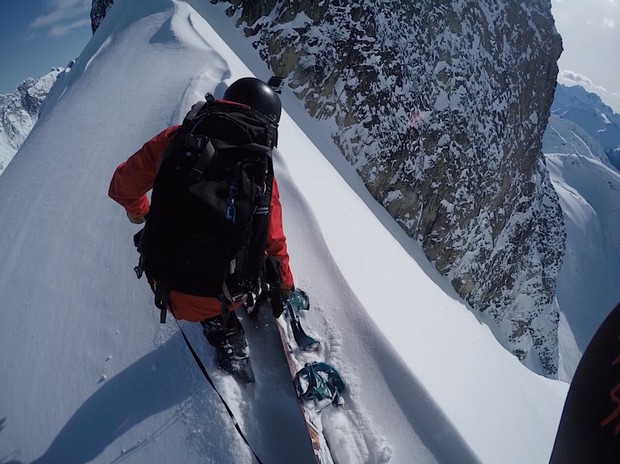 When you’re heli-ing, finding a line is stressful because you look at a face, and pretty much decide in a few seconds whether you want to do it or not. Otherwise, you might as well just throw some dollar bills into the rotor.

There’s so much to take in. When you look at something from a heli, the perspective is so different. Usually we end up picking lines that are a bit big for us, because from the helliit doesn’t look that big. Then you get on top of it, and you’re like, "Shit. I should have maybe looked at something else!" But then when it works out, you’re more stoked than you’ve ever been! I think that’s what half the excitement with filming with a heli is. The entire process is fast.

Hiking is a good way to really feel the snowpack en route to the top. This is definitely the slowest process, but it’s enjoyable because you’re really earning your turns. It makes you feel good about yourself! I like having the time to visualize what I’m going to jump off, so I’ll go over it in my head a few times while hiking.

Sledding is my favorite way to approach the backcountry. I think its a good mix of actually getting to the zone, seeing the conditions, andbeing on a less intense schedule than heli-ing. Then you add a bit of hiking in there, too. You have all your energy by the time you’re on top of something waiting to drop in. I like that you can check a spot from multiple angles really quickly.

#3: Can you talk about any sort of research you do about new zones, guides you talk to, and any other preparation that goes into where you choose to ride big lines?

Looking at pictures of zones and talking to guides helps. We really go to places based on the specific terrain they have. We went to Mica Heli this past year because we heard they had the best pillow zone in the world, and it was true. We just hit the tip of the iceberg. But on top of that, checking out avalanche.ca is super important. It’s not worth it to me to put our lives on the line for a powder day. There’s always another day.

#4: How have you progressed from, say, five or ten years ago in terms of the kind of terrain you're riding and how you're riding it? 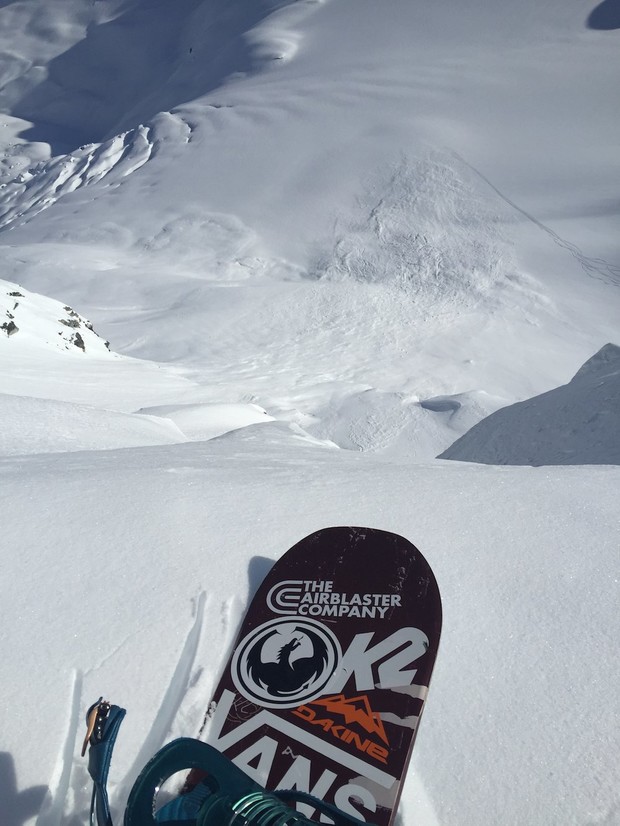 I definitely have learned so much! It’s a constant learning process. When I originally went out to the backcountry, I was scared shitless. I wasn’t used to not being able to see my landings. It's so crazy because I had no problem hitting a 60-foot jump in an icy park.

And now, since I’ve spent so much time out here, it’s the complete opposite. In 2012, I rode with my boyfriend and his brother all season, and I started loving jumping off big cliffs. That’s probably my favorite thing to find: a few turns into a big cliff.

RELATED: Robin Van Gyn's keys to guiding in the backcountry

This year we didn’t get to ride much that allowed us to jump off much because of the snowpack, so instead Annie Boulanger and I rode the biggest couloirs of our lives in Bella Coola. There’s always a progression happening, even if it’s not trick-based. We rode some of the biggest lines ever, but we kept it on the ground, and I would still consider that progression.

#5: How do you orient yourself on a top-to-bottom run as you're riding, and what's your mindset throughout it? 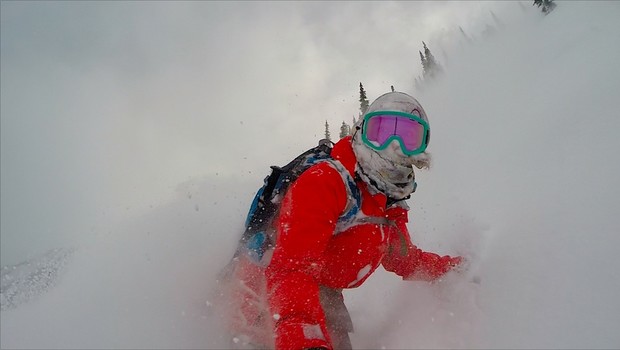 It’s a memorization game. You look at a line from as many angles as possible. Pick out the smallest bumps that could potentially affect the way you’d ride it.

Then you just visualize how it’ll work out perfectly. You make quick decisions even if it’s not what you planned, because snow moves. Things look different. You just have to have quick thinking and be able to adapt to different conditions.

#6) Why did you decide to create Full Moon Film? What was the impetus behind it? Why did you choose the riders you did?

I wanted to involve our entire community to build this project, from the past to the present to the future. Everyone has an inspiration, so it’ll be cool to showcase how we are all connected.

Our industry needs to preserve our cultural heritage. It was just perfect timing to do something like this, especially since the media landscape has changed so much. So we are going into the archives to bring it back to life and pay tribute to that path that led us here. And as far as the crew goes, it speaks for itself.

It was a bit of a no-brainer since most of us live in Whistler, and we’ve all become good friends over the years. It’s been great because we’ve never all worked together as one. The energy everyone brings to the table is far beyond anything I could have ever created for myself. Power in numbers!

Well it's true. It’s really hard to pursue a career in the backcountry and/or street because there’s not as much support there. It seems so backwards for women, because on the men’s side, the film stars are huge priorities for the industry.

We are trying to change that, give some inspiration, and showcase that there's a lifestyle worthy for these stories to be told. I just want this to be an avenue where the contest girls can jump over the fence and make something happen.

It’s definitely a lot more work, and a lot less immediate gratification,but there’s something about the serenity out there that just makes you happy. The progression and creative possibilities are endless. You could spend a lifetime out there and still want more.

I’m so happy that Jamie Anderson wanted to film with us. Her mental game is so strong, so when she went to AK with MFR, Helen and Robin, she held her own. She definitely has a lot to learn, but she just put herself in one of the most challenging mountain ranges, which is going to expand her mind from the start.

When we bring her out to the Whistler backcountry, which is a little more playful than the big mountain lines in Alaska, I think she’s going to shine. It’s exciting and I want to encourage the other girls to come out too! Spencer O’Brien, Christy Prior...yes, I’m calling you ladies out.