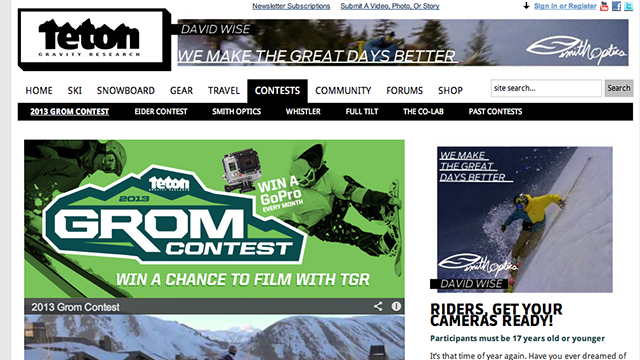 It’s that time of year again. Have you ever dreamed of becoming a ski or snowboard movie star? The 2013 Teton Gravity Research Grom Contest may help make that dream a reality for one lucky participant. Groms 17 years of age or younger may submit up to one ski or snowboard edit each month for a chance to film with us during the 2013/2014 season and have an edit of their footage shown before our 2013 film tour. The Grand Prize ski and snowboard edits will be screened in theaters around the world as a preview to TGR's 2013 feature length film, to an audience of over 80,000 people. Furthermore, every month our favorite ski and snowboard edit will be awarded a GoPro Hero3.

Here is what you need to know:

- You may submit up to 1 video/month

- Our favorite video from each month will win a monthly prize

- While a killer edit may suffice, multiple submissions may help us get to know you better