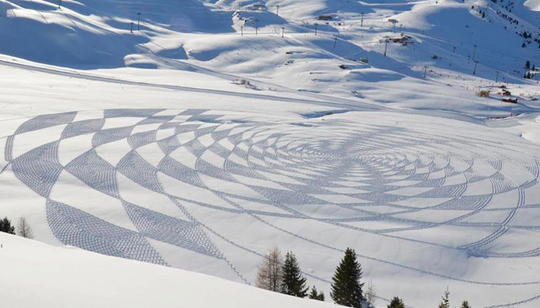 Got snow, make art like the British artist Simon Beck who traded in his paint brush for a set of snowshoes. Beck wallows around in fresh snow to create these massive, ephemeral art installations. The British artist, whose work was spotted on Colossal, has been making the installations since 2004:

Each work takes the 54-year-old artist anywhere between 6 hours and two days to complete, an impressive physical feat aided from years of competitive orienteering. The orienteering also helps him in the precise mapping process which often begins on a computer before he’s able to mark landmarks in the snow that guide his precise walking patterns.

Above are some of Beck's latest creations, all made over the last month in Les Arcs, France.