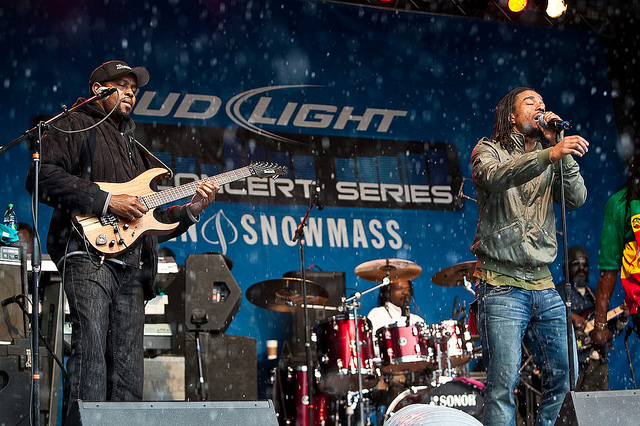 Aspen/Snowmass is once again bringing music to the mountains this winter with major acts heading to the valley including The Easy Star All-Stars, Brett Dennen, Grouplove, The Infamous Stringdusters, Donavan Frankenreiter and the Toubab Crewe.

“Live music is a vital component of the Aspen/Snowmass event calendar and this year’s Bud Light Hi-Fi Series line-up raises the bar on providing a fun, entertaining experience for guests and locals of Aspen/Snowmass," says John Rigney, VP of Sales & Events for Aspen Skiing Company.

Mutemath makes their Aspen debut reigning from New Orleans as an American alternative rock band that formed in 2003. The band melds hip-hop, moments of grandeur, and vocals that are reminiscent of classic rock to create a sound that is inherently their own.

Internationally renowned reggae act, Easy Star All-Stars brings their superb rhythm with the Dub Side Of The Moon to Snowmass Base Village on Saturday, February 16 for the third free Bud Light Hi-Fi Concert of the season. The show will begin at 3:00 p.m. with a soon to be announced act and Easy Star All-Stars will take the stage at 4:00 p.m. Since their debut in 2003 with their cover album of Pink Floyd's The Dark Side of the Moon entitled "Dub Side of the Moon," the reggae collective has built an ever-growing, international fan base.

SPRING EVENT
13th Annual Bud Light Spring Jam – March 21-3 1
The 13th annual Bud Light Spring Jam – the premier spring festival in the Rocky Mountains – brings two weekends of competitions, concerts and parties to Aspen/Snowmass. Brett Dennen kicks off the live music on Friday, March 22 in Snowmass Base Village to celebrate the NASTAR National Championships. This youthful folk/pop singer first won the heart of his loyal fans in 2004 with his soulful lyrics, easy groove and the hit single "Desert Sunrise." The show will begin at 3:00 p.m. with a soon to be announced act and Brett Dennen will take the stage at 5:00 p.m.

The eagerly anticipated Bud Light Spring Jam Core Party is expanded into two nights for the first time and will feature a beer garden. The event will kick off with MarchFourth Marching Band playing a street concert in downtown Aspen on Friday, March 29. M4, as their devotees call them, throws itself and the audience into a swirling volcano of high-energy music and spectacle. Grouplove will take to the same downtown Aspen stage on Saturday, March 30. Their live shows sweep up the audience with an energetic blend of upbeat indie-pop, rock and folk. Their shows are kinetic and engaging. DJ Naka G will be performing at 8:00 p.m. each night while the crowd enjoys giveaways from sponsors. MarchFourth Marching Band and Grouplove will take the stage at 9:00 p.m. on their respective nights.

At Belly Up, Hunky surfer, singer-songwriter Donavan Frankenreiter will take the stage March 23. On March 24, See-I & Toubab Crewe will co-headline a fun night of worldly sounds. Music festival darlings, The Dunwells also return to the Belly Up on March 26. The Colorado based folk group Elephant Revival will perform on March 29. On March 31, Belly Up brings back their favorite Talking Heads tribute act, THIS MUST BE THE BAND. This show will include a full band performing the album Stop Making Sense in its entirety.