A wild black bear attacked a man relaxing in a hot tub at the Whistler ski resort in western Canada, with a swift whack to the head, police said.

The 55-year-old man from Coquitlam, British Columbia, "felt a heavy blow to the back of his head which propelled him forward in the hot tub" on Saturday, Royal Canadian Mounted Police Staff Sergeant Steve LeClair said in a statement.

The man then "turned around and found himself face to face with a black bear. He yelled at the bear and retreated inside," the statement added. 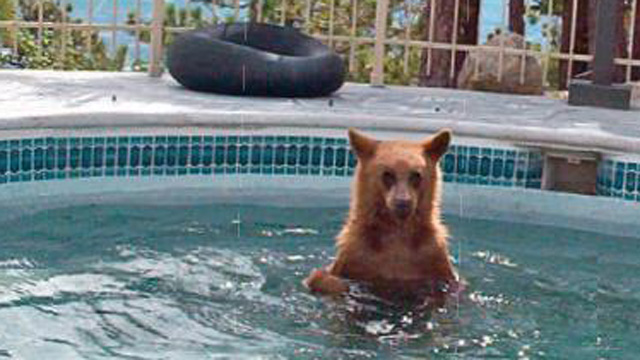 This is a photo of a bear in a swimming pool.

Injured during the attack, the man, who was not identified, suffered lacerations to the back of his head and was taken to Whistler Health Care Center for treatment.

Police responded to the incident, locating the bear about 100 yards away as it headed for a wooded area.

"The bear was destroyed," the police statement said. According to local media, police shot and killed the bear.

A necropsy will be performed on the bear "to determine the motivation for the attack," a police statement said.

Story via the AP.