News: Cannabis Could Be Allowed In 2014 Olympics In Sochi, Russia 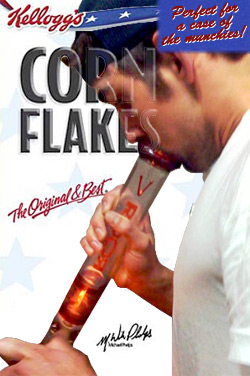 John Fahey, the president of the World Anti-Doping Agency (WADA), has indicated the body may look at changing the criteria for cannabis as a banned substance for athletes. The idea that cannabis doesn't fall into the descriptions applied to performance enhancing drugs isn't new, but the fact that it's gaining traction is.

A coalition of Australian sporting bodies met with David Howman, WADA's general director. They wanted to express their contention that cannabis should not be on WADA's banned list of match-day performance enhancing drugs. After the meetings, a statement was released.

"There are those who believe that our current criteria need to be amended and that will be given appropriate consideration through this review process," Fahey said. He went on to talk about drugs that are banned in some sports but not in others. That's the crux of the argument for changing the criteria on cannabis.

What's really at issue is whether or not WADA, or any athletic governing body for that matter, will go on listing cannabis as a banned drug in sports where it is clearly not a performance enhancer. Currently, an athlete testing positive for cannabis can receive a two-year ban. That's incredibly harsh for something that has no discernible effect on the sporting outcome.

No decision this year

There won't be any change in the rules in time to mean anything for the 2012 London Olympics, but changes could be put in place as early as 2013, which would have an impact on the 2014 Winter Games in Sochi, Russia.

It seems WADA is considering the wider social picture wherein cannabis isn't seen nearly as negatively as in the past. People are becoming more accepting of the substance as a medicinal or recreational substance.

What sports would cannabis still be banned from?

WADA isn't looking at not testing for it at all, but not looking for cannabis unless it's use is shown to give a potential advantage in a particular sport. While it's not something that will help a competitor in most sporting endeavors, something which requires a steady hand is different. Two given are shooting and golf. The criteria for banning cannabis would be if it is shown to be performance enhancing.

It will be interesting to see how sports organizations in the United States react if an ant-doping body like WADA determines cannabis to be something they aren't going to test for in many competitions. The attitudes about the use of the plant are loosening in the U.S., but not as quickly as in some other countries. How will sports testing for cannabis be handled?