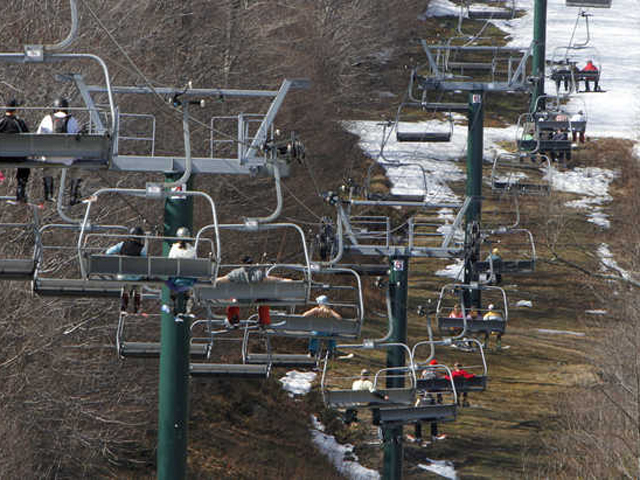 Boulder, Colorado - Colorado Ski Country USA (CSCUSA) announced at its 49th Annual Meeting, that its 22 member resorts hosted an estimated 6.16 million skier visits during the 2011-'12 ski season. This represents a decrease of 11.4 percent, or approximately 790,000 skier visits, compared with last season, which was the fourth best season on record. Compared with the five year average, CSCUSA member resort skier visits are down 11.9 percent. The overall snow related decline interrupted the recovery resorts had been building since 2008-'09.

In an indication of the extreme weather impacting Colorado resorts this season, Colorado’s western slope experienced its third driest and seventh warmest winter in records going back to 1895. Precipitation on the Western Slope this winter was 43 percent below average, and down every month of the winter. In Colorado overall, March 2012 was the driest in more than 100 years, and we experienced the second warmest March on record. President and CEO of Colorado Ski Country USA Melanie Mills noted, “Fortunately, seasons such as the one just ended have proved to be historically rare and the ski industry has exhibited a remarkable ability to bounce back after poor snow years in the past.”

Mills continued, “Much of the ski industry in the US was confronted with weather challenges last year, but several of our resorts bucked the national trend and showed signs of resilience during what was clearly an uninspiring winter.”
The diversity of ski resorts in Colorado saw some areas post increases and even records in visitation. Colorado Ski Country resorts also saw strength in both domestic and international destination visitors which helped soften the economic impacts to resort operators and resort communities of the overall decline in visitation.

Colorado is favorably positioned for rare dry spells given that resorts are at higher elevations where the air is dryer and colder, therefore allowing the snow to maintain consistency. Aided by colder temperatures favorable for snowmaking, resort snowmakers and slope groomers were able to maintain a quality snow surface throughout most of the season.

Momentum going into the season was strong after seeing an uptick in visitation last year, and economic conditions generally improved during the season. Abundant amounts of snow came in the fall, allowing some resorts to open earlier than planned, but the uncharacteristic precipitation deficit brought that momentum to a standstill. Snow came in the middle of the season and several resorts broke single day snowfall totals, but perception of an underperforming winter was already set in skiers’ minds. “We’ve had dry years in the past, and we’ll have dry years again,” Mills explained. “Not every year can be a record breaking year, and with nary a snowflake in what is normally our snowiest month in Colorado, season visitation numbers are disappointing, but not unexpected.”

CSCUSA resorts upheld their dedication to providing guests with a quality product and superior service which sets Colorado apart from other ski destinations, and keeps the state’s appeal as the premiere place for winter travelers. “Our resorts have so much to offer visitors that in some cases the world class skiing is just one of a menu of activities. And for many people, the season was more about being outside and spending time with friends and family taking in the beautiful outdoors and wonderful amenities of our resorts.”

With certain assumptions in place, statewide skier visits for Colorado are estimated at 11,010,584 million. This estimation shows Colorado being down 9.8 percent, or approximately 1,195,000 visits, compared with last season. On a national level, skier visits overall are down 15.7 percent with the Rocky Mountain region seeing a decrease of 7.2 percent.

Skier visits are the metric used to track participation in skiing and snowboarding. A skier visit represents a person participating in the sport of skiing or snowboarding for any part of one day at a mountain resort.

These numbers are preliminary results and subject to final adjustments by CSCUSA members. The decision to release individual numbers is up to each individual resort.

*No non-public information factors in to CSCUSA’s estimates.