Via CBC News: A surveyor working on a mountainside was killed when he was swept off a cliff by an avalanche in a remote region of northwestern British Columbia on Tuesday.

RCMP say two men at the camp, which is located about 50 kilometres of north of Stewart near were taking GPS readings on a steep slope when they were swept away by the avalanche.

One of the men was able to get free of the avalanche, but the other man — Pat Lawrence Desmarais, 50, of Telkwa — was carried over a 300-metre cliff to his death.

“Avalanche technicians and search crews from a neighbouring mine assisted in the search and located the 50-year-old deceased male,” said a statement issued by Const. Lesley Smith.

A coroner from Terrace, B.C., is investigating.

B.C. coroner Barb McLintock says it's very early in the season for an avalanche to claim a life, noting the first fatality last year was reported in mid-November. 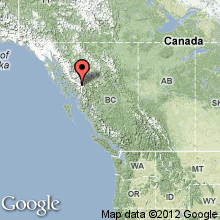